Over the past decade, Georgia's economy has grown at an average annual rate of 4.5%. This was in spite of numerous shocks, including the global financial crisis of 2007-2008, and the regional geopolitical and economic headwinds in recent years. Economic growth in the coming decade will be higher than the last, owing to an already-favourable business environment that is set to improve. Georgia has overhauled its economic management and governance, and is the outperformer in the Caucasus and Central Asian region in terms of its overall openness to international trade and foreign investment. This has significantly bolstered the private sector, and the country's international performance on governance and the investment climate have soared. Georgia's strategic position on the Black Sea coast and Mainland China's revived Silk Road trade route have been highly beneficial for the country's tourism, transport services and construction sectors. Georgia's lack of tariff and non-tariff barriers to trade, numerous free trade agreements (FTAs) and liberal international investment regime serve to reduce trade and investment-related risks for businesses that operate in this market.

September 2018
The Japan International Cooperation Agency signed an official development assistance loan agreement for up to JPY38.7 billion (USD348.9 million) with the government of Georgia for the East-West Highway Improvement Project (phase two). The project involved the construction of an international logistics network connecting the Black and Caspian seas. The project was expected to be completed in September 2021.

December 2018
Salome Zurabishvili won the presidential election on the back of campaign promises to join the EU and the North Atlantic Treaty Organization.

July 2019
Aigroup had unveiled plans to build an electric car manufacturing factory in Georgia. The project would be carried out in partnership with Changan Corporation. The facility would be located within Aigroup's proposed industrial complex which is to be built on 1 square kilometre of area in Kutaisi. It would have a capacity to produce 40,000 electric cars annually.

August 2019
The ADB had approved a USD415 million loan for the USD558.6 million Kvesheti-Kobi road project in Georgia. It was first in a series of works that would be undertaken as part of upgrades planned for the North-South Corridor. The corridor was a key transit route for Georgia, Armenia and regional trading partners, and intersected with the East-West Highway to the north of Tbilisi.

January 2020
Enlighten Renewable Energy signed an agreement to acquire the rights to an under-development 100MW wind project in Georgia. A joint venture between a Georgian firm and a company operating in central and Eastern Europe was developing the project, which required an investment of USD135-155 million. Work on the project was expected to start in one-and-a-half to two years, after establishment, operation and financing agreements for the project development and licensing activities were completed.

April 2020
On April 3, the Georgian government introduced an export ban on medical and pharmaceutical items in connection with the Covid-19 outbreak. On April 1, the Georgian authorities also announced a waiver from VAT duties for imports of certain medical items necessary in the fight against the Covid-19.

April 2020
In response to Covid-19, the 'Anti-Crisis Economic Action Plan' was unveiled on April 24, which lists government's initiatives to support the population and businesses along with the measures already implemented by the government, such as the payment for gas, electricity and utilities for users consuming up to 200kW of electricity and/or up to 200cu m of natural gas monthly. The government introduced the State Program for Maintaining Prices of Primary Consumption Food Products. The programme envisages subsidies for certain imported products to keep their local price stable (rice, pasta, buckwheat, sunflower oil, sugar, milk powder, beans, wheat, and wheat powder) for the period from March 15 to May 15 2020; bank loan service holidays for individuals; income and property tax holidays for hotels (until November 1, 2020). Within the framework of the new programme 'Co-financing Mechanism for Supporting Family-owned, Small and Medium-size Hotel Industries', Enterprise Georgia (the agency of the Ministry of Economic and Sustainable Development of Georgia) will co-finance up to 80% of the annual interest rate on loans issued to family-owned, small- and medium-sized hotels; the custom clearance term for vehicles imported before April 1, 2020, was extended to September 1, 2020, for car importers; the credit guarantee scheme would be enhanced; and VAT refunds would become automatic and would accelerate. The prime minister also stated that the government plans to support agriculture and construction sectors.

April 2020
In response to Covid-19, the government announced that employers will receive a state subsidy over the next six months for each job maintained. In addition, starting from January 2021, the rule of indexation of pensions will be introduced. According to this rule, the pensions would increase by at least the rate of inflation; for pensioners aged 70 and above the pensions will increase in addition by 80% of the real economic growth rate. Regardless of the actual rates of inflation and economic growth, the pension increase would be at least GEL20 for the pensioners below 70 and above GEL25 for pensioners above age 70.

April 2020
In response to Covid-19, it was announced that commercial banks would gain access to a long-term financial resource of GEL600 million. GEL500.0 million will be provided to support businesses, including through the credit guarantee scheme. Financing for working capital will increase. Additional funds of about GEL350 million will be directed to health spending including lab testing and quarantine expenditures as well as increased costs associated with hospitalisation, medical treatment and medical supplies. 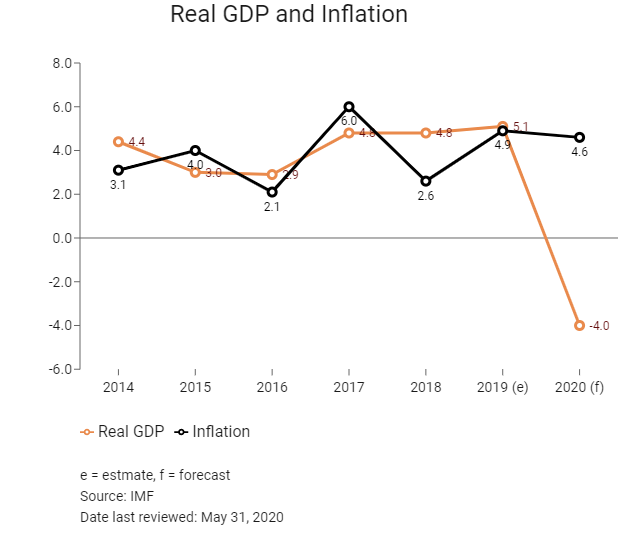 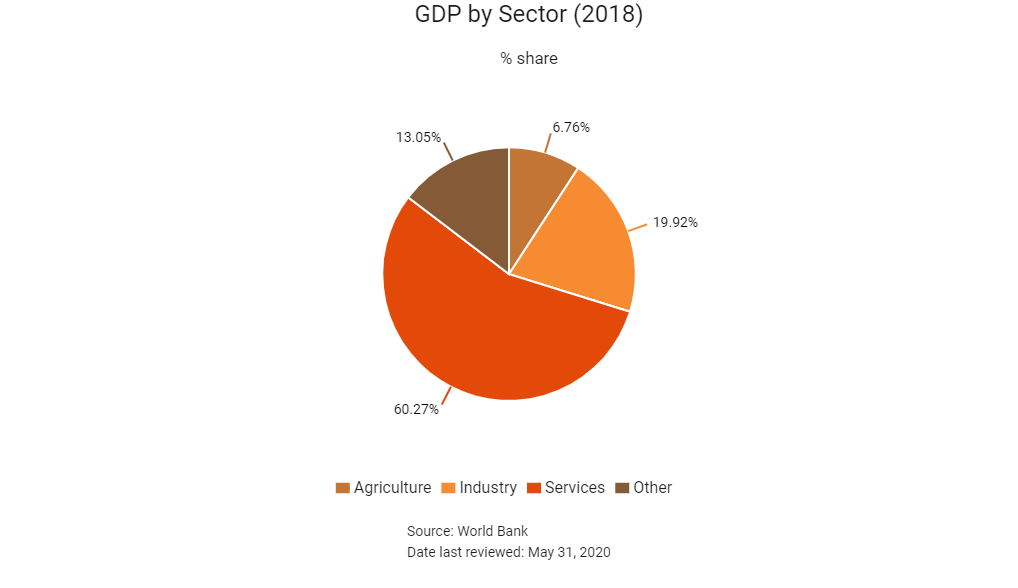 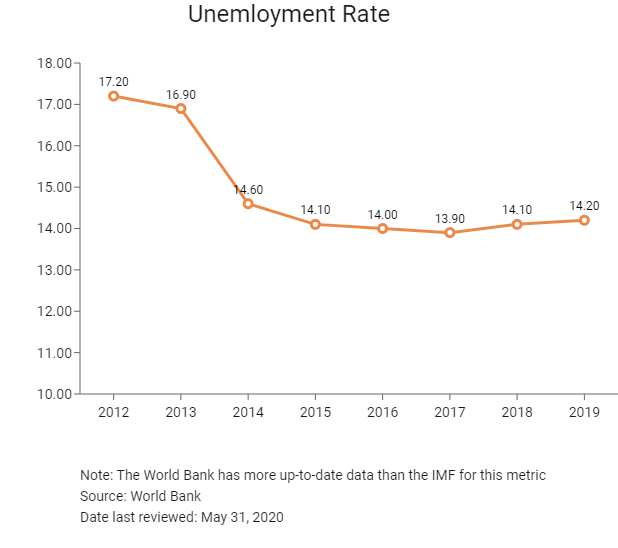 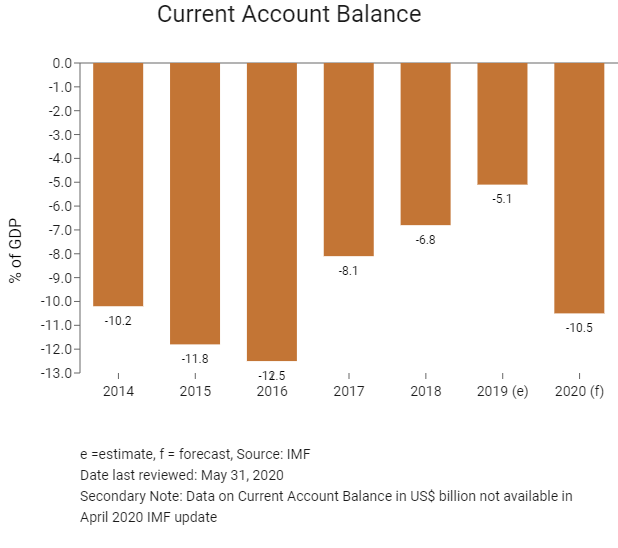 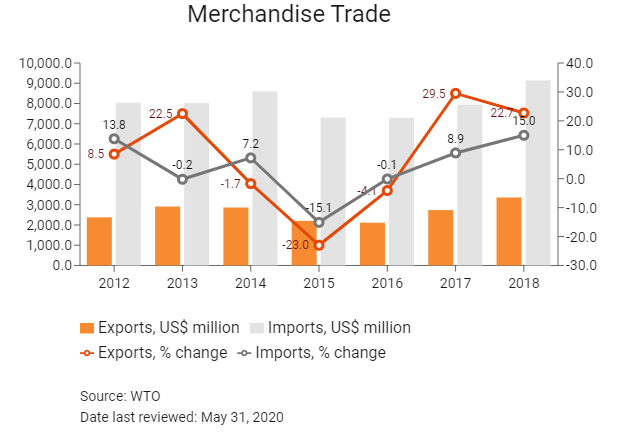 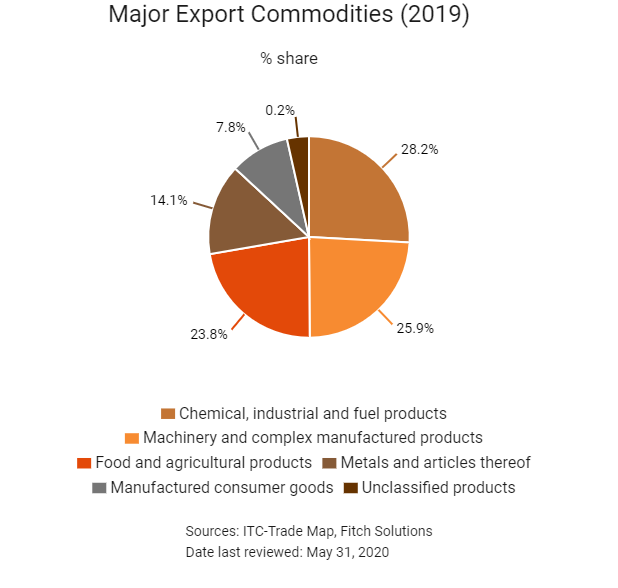 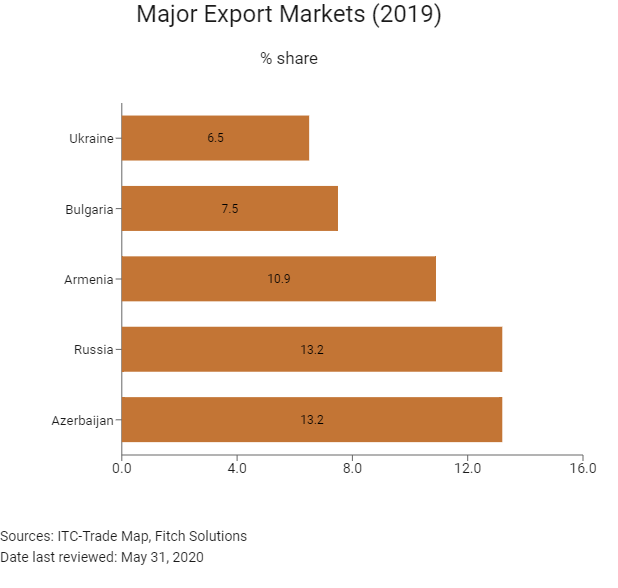 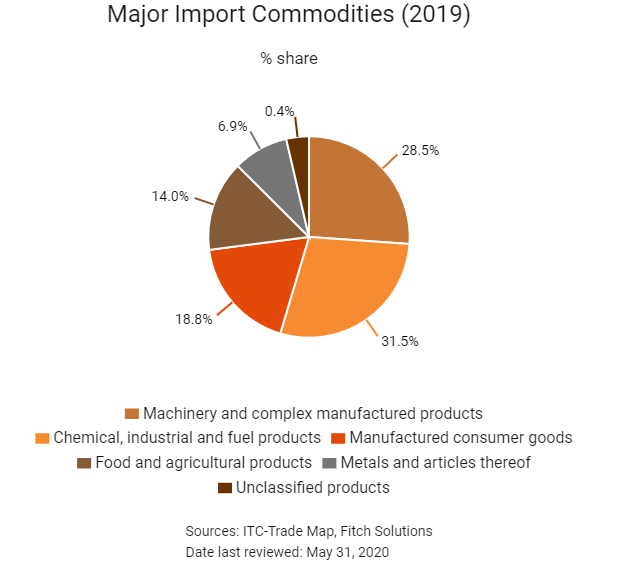 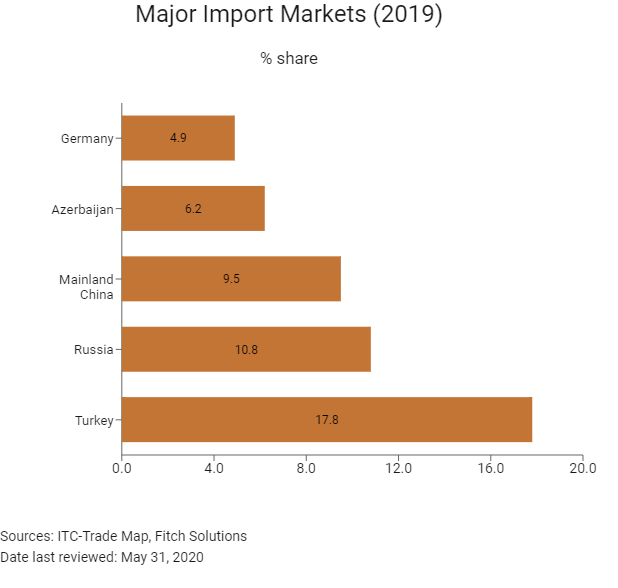 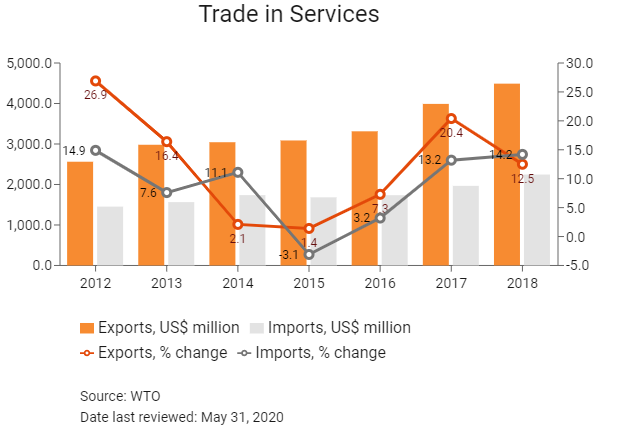 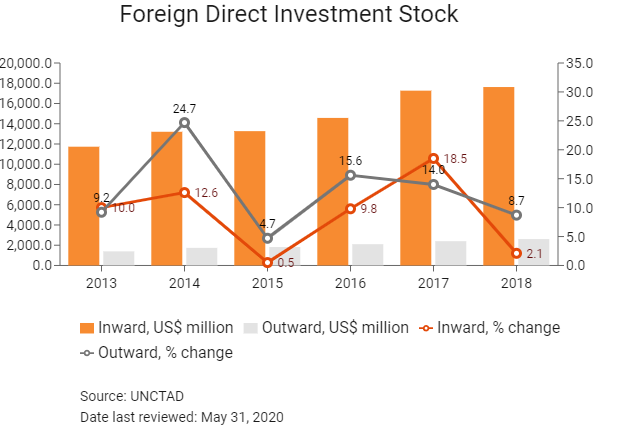 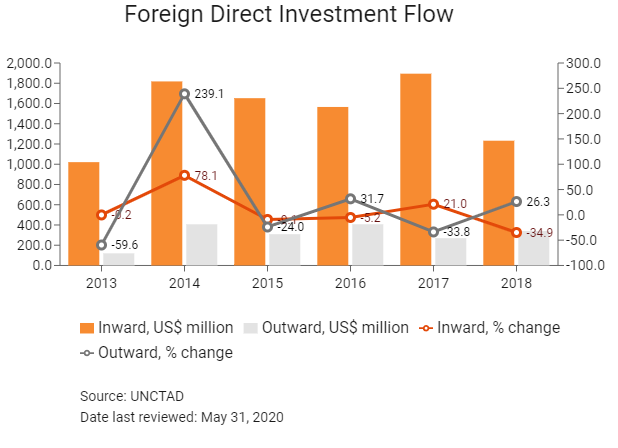 Source: Revenue Service of the Ministry of Finance, Georgia

Source: Revenue Service of the Ministry of Finance, Georgia
Date last reviewed: May 31, 2020

The Georgian government does not enforce any localisation policies on businesses in terms of using domestic goods, labour or technology.

Despite Georgia adopting a more stringent visa regime in 2014, it remains a fairly quick and low-cost process to obtain a foreign work visa in Georgia. Prior to 2014, people wanting to work in Georgia could enter and do so on a tourist visa. This has now been changed and anybody who wants to work in Georgia must apply for a long-term visa and eventually a resident's permit. The long-term visa is valid for 180 days. Resident permits take around 30 days to be issued.

Various countries and groups enjoy visa-free access to Georgia and are usually permitted to stay (but not work) in the country for up to 360 days. Citizens of countries within the EU, the Commonwealth of Independent States, North Atlantic Trade Organisation, the Schengen area, the Gulf Co-operation Council, the United States and a wide range of others can enter Georgia visa-free.

ECONOMIC RISK
Georgia's current account deficit is among the widest in Europe and will remain a risk for the stability of the economy. In the wake of the Covid-19 pandemic it is likely to widen even further as inbound tourism freezes and copper exports plummet. Georgia's economy will therefore face increased risks in 2020. When business returns to normal post the Covid-19 crisis, growth will be mainly driven by strong investment and improving private consumption, amid an increasingly favourable business and monetary policy backdrop. Gross fixed capital formation will be a key driver of economic growth over the coming quarters, coming from large-scale investment projects that are financed either by the state or multilateral organisations. That said, although Georgia has managed to reorient its exports towards European markets in recent years, the Commonwealth of Independent States remains a significant export market.

OPERATIONAL RISK
Georgia is a top performing state in the Caucasus and Central Asia region for Operational Risk, with its main strengths being the liberal trade and investment regimes, its increasingly efficient bureaucratic systems and regionally low corruption levels. The country's labour market is also attractive for businesses requiring basic skills of numeracy and literacy owing to regionally high educational attainment levels and competitive labour costs. Downside risks come from the state's logistics profile, given Georgia's reliance on natural gas and refined fuel imports and the current poor quality of its transport network by OECD standards. That said, transport risks are expected to abate over time due to the significant international funding the state is receiving for transport infrastructure on account of its strategic position on Mainland China's planned overland new Silk Road route. 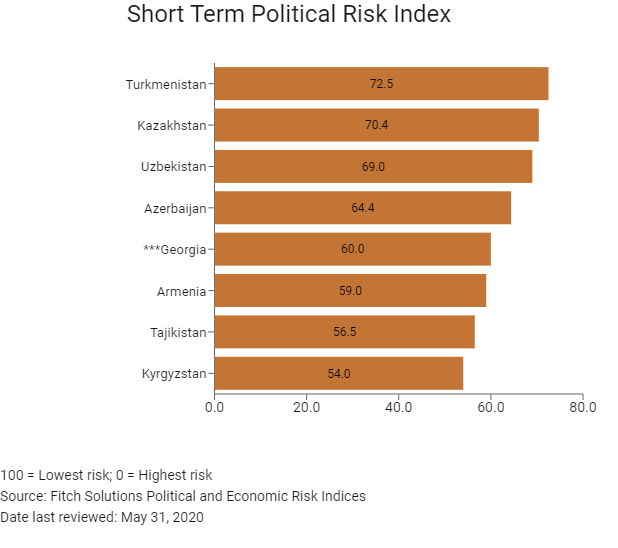 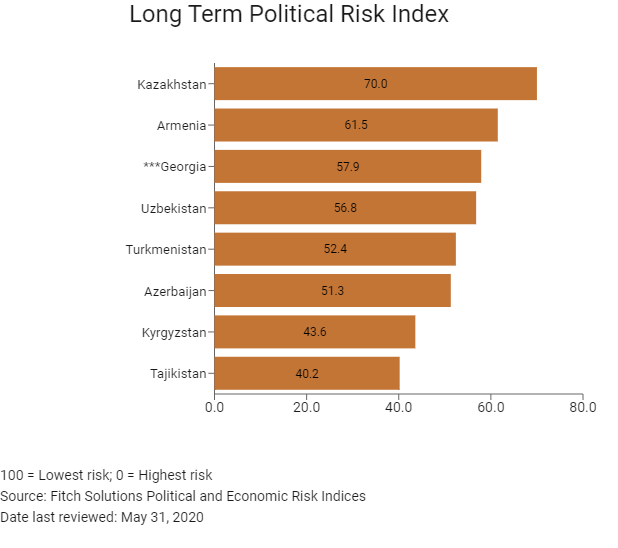 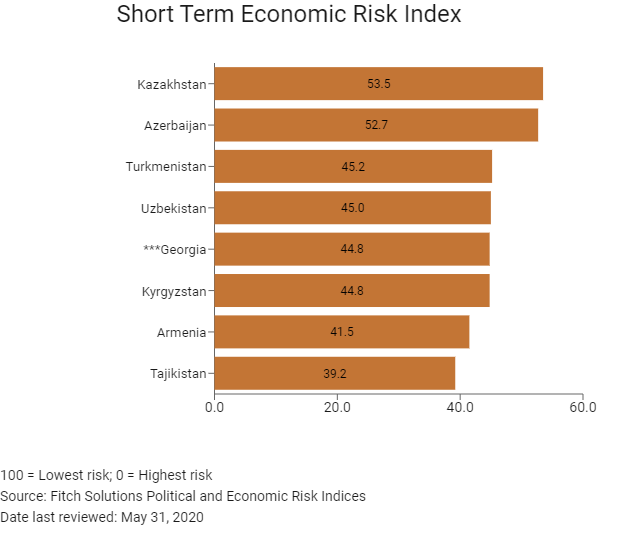 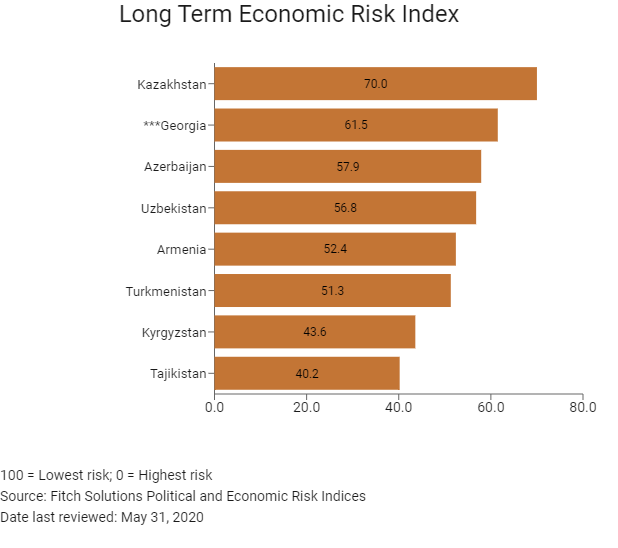 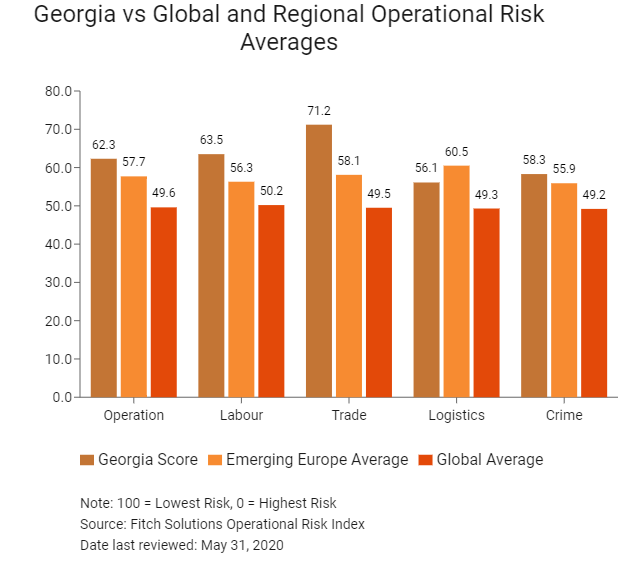 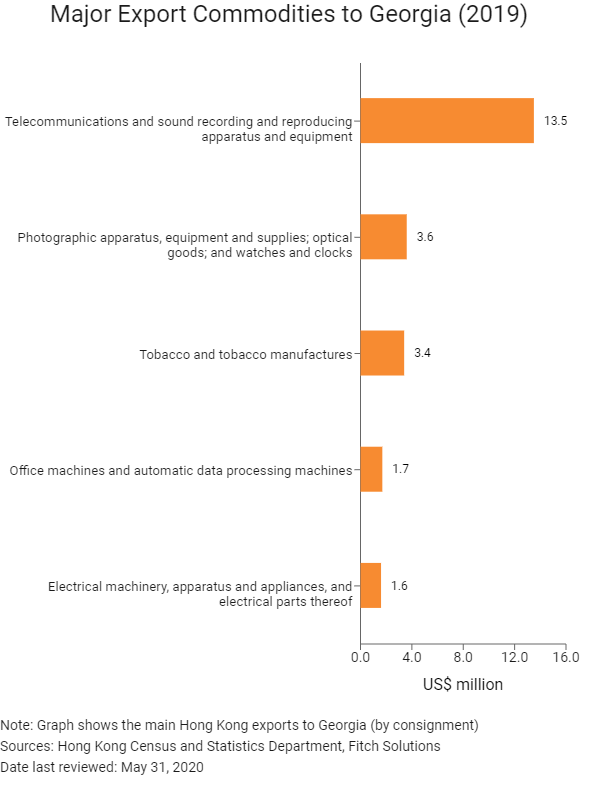 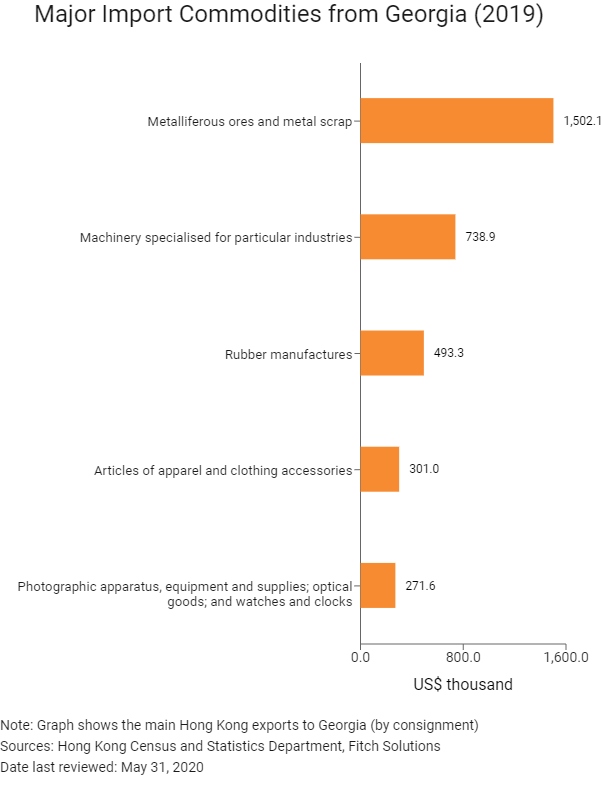 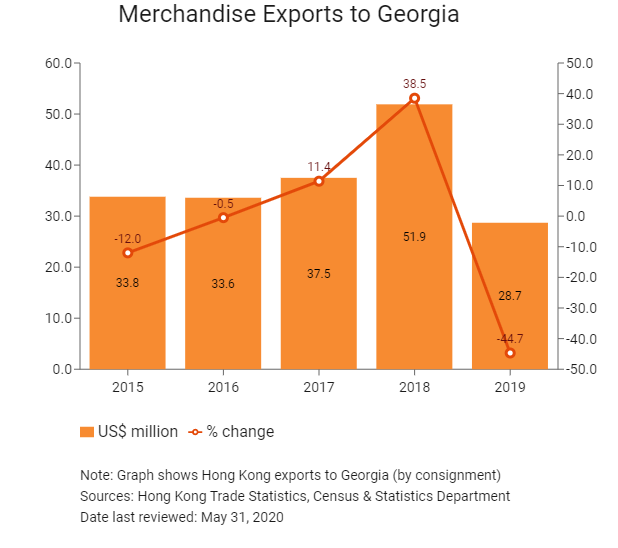 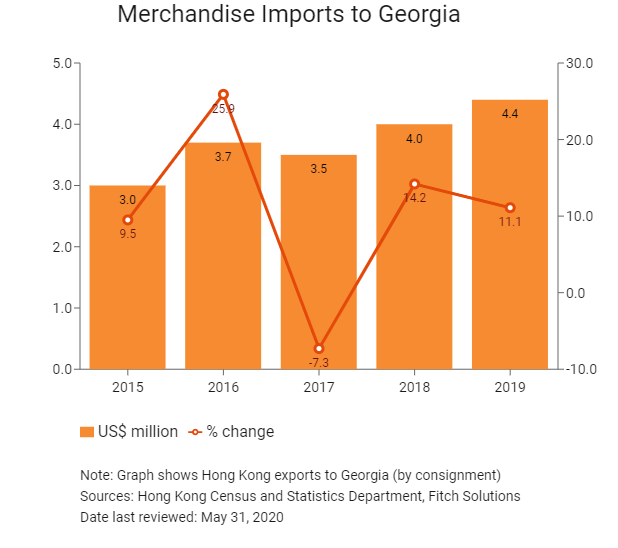 Treaties and Agreements between Hong Kong and Georgia

HKSAR passport holders need a visa to travel to Georgia. They can apply for an e-visa. An e-visa is an easy way to get a permit to enter into and travel within Georgia for the purpose of a short stay. An e-visa is applied for online and emailed to the recipient.