Austria has a well-developed market economy that welcomes foreign direct investment (FDI), particularly in technology and research and development (R&D). The country benefits from a skilled labour force and a high standard of living, with the capital, Vienna, consistently placing at the top of global quality-of-life rankings. Austria does fairly well in terms of business environment as it ranks 27th out of 190 countries in the World Bank's 2020 Ease of Doing Business Index. Austria's strengths are its stable economy, its location at the centre of Europe, and its skilled and highly productive workforce. Export incentives, political stability and low telecommunication costs also make the Austrian business climate favourable. Generally, the Austrian government favours FDI targeting the high-tech sector. Another attractive factor is Austria's accommodating commercial taxation system, which is one of the most favourable in Europe, as it does not have a wealth tax or a professional tax. The Austrian economy is well equipped to grow at a steady pace over the next 10 years with real GDP growth set to outperform relative to the eurozone. With more than 50% of its GDP attributed to exports, Austria's economy is closely tied to other European Union (EU) economies, especially that of Germany.

The European Investment Bank (EIB) sanctioned EUR2.4 billion in new financing to improve public services, upgrade infrastructure and strengthen private sector investment in various European countries. Of the total, the bank would provide EUR905 million for five transport projects in Austria, France, Germany, Latvia and the Netherlands. The EIB would also finance the expansion of the 8km cross border Karawanken tunnel between Austria and Slovenia.

Chancellor Sebastian Kurz was removed from his post following a no-confidence vote.

Legislative elections were held in Austria on September 29 to elect the 27th National Council, the lower house of Austria's bicameral parliament. The snap elections were called in the wake of the collapse of the ruling Austrian People's Party (ÖVP)-Freedom Party of Austria coalition and the announcement of then vice chancellor Heinz-Christian Strache's resignation in May 2019. ÖVP won the legislative election with 37.5% of the vote, winning 71 seats, while the second place SPÖ had 21.2% and 40 seats.

The EIB provided a EUR90 million (USD99.8 million) loan to support Energie Steiermark's power grid expansion measures to integrate renewable and other energy-efficiency projects in Austria, according to a press release from EIB. The financing would be directed towards sustainable investments in the 30,000km electricity grid in Styria.

Austrian Federal Railways announced plans to invest around EUR1.1 billion (USD1.2 billion) in railway infrastructure projects across the states of Styria, Tirol and Vorarlberg. Key focus areas would be the modernisation of railway lines, new stops and additional parking spaces; the construction of park and ride facilities at the train stations; and double-track route expansions.

On March 12, the European Central Bank (ECB) decided to provide monetary policy support through additional asset purchases of EUR120 billion until the end of 2020 under the existing asset purchase program (APP) as well as additional temporary auctions of the full-allotment fixed-rate temporary liquidity facility at the deposit facility rate and more favourable terms on existing targeted long-term refinancing operations between June 2020 and June 2021.

To mitigate the economic impact on Covid-19, on March 15 the Austrian government announced a total fiscal package amounting to EUR38 billion (about 9% of GDP). Financing includes EUR9 billion in guarantees to companies, including exporters and the tourism industry; and EUR10 billion for the deferral of personal and corporate income taxes (for 2020), social security contributions (three months) and VAT payments (until the end of September 2020).

On March 18, the ECB implemented further monetary policy measures which included an additional EUR750 billion APP of private and public sector securities (Pandemic Emergency Purchase Program) until the end of 2020, an expanded range of eligible assets under the corporate sector purchase program, and the relaxation of collateral standards for Eurosystem refinancing operations. 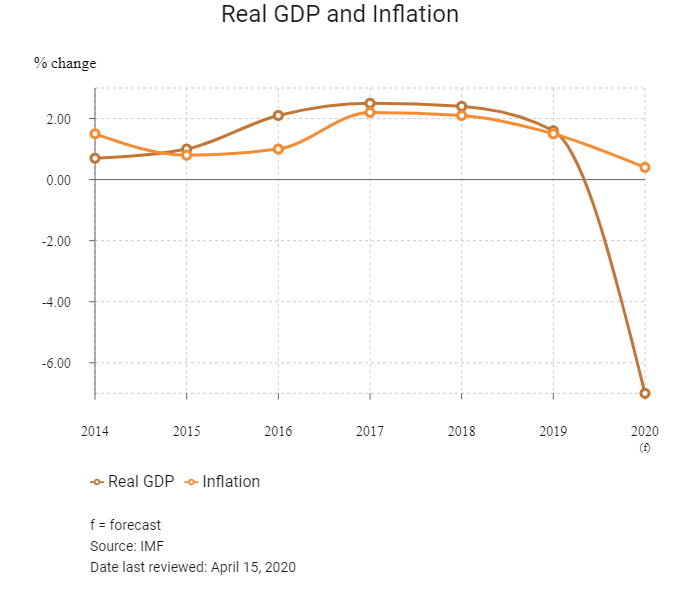 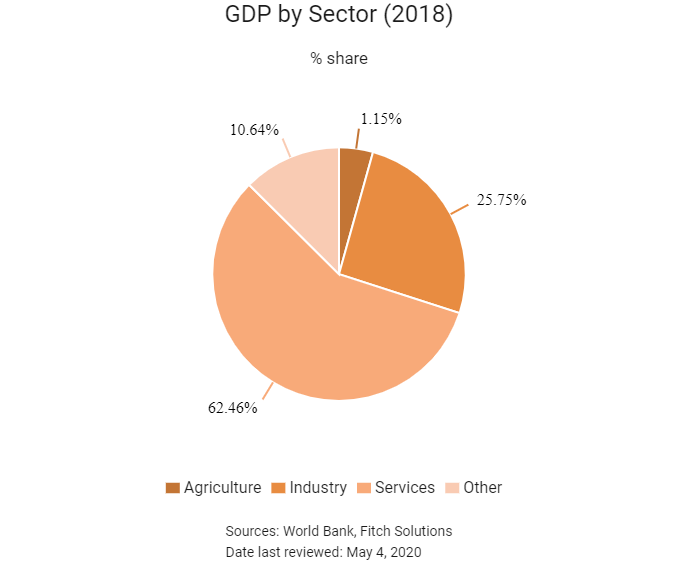 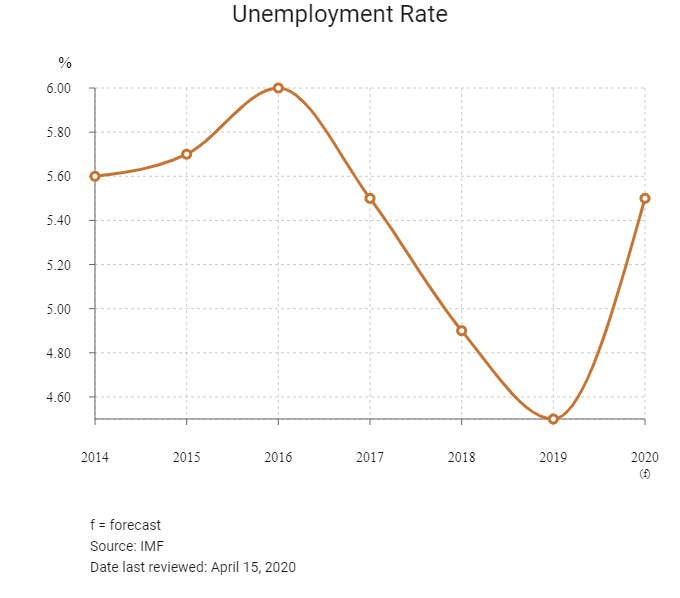 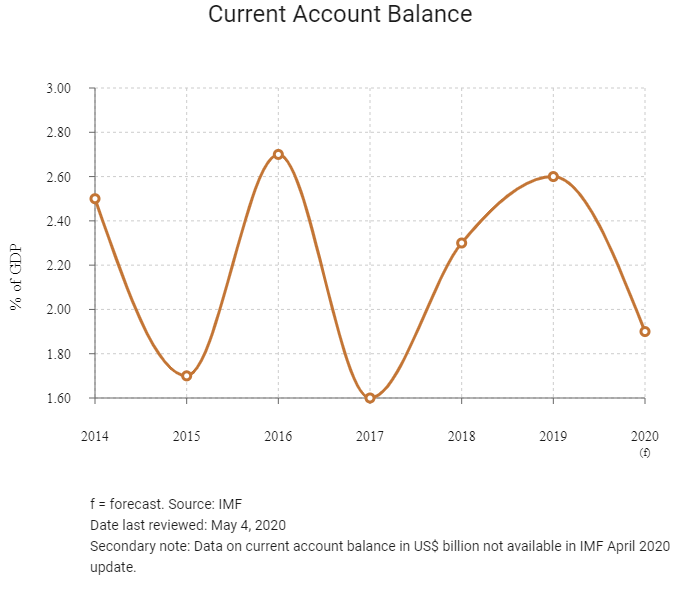 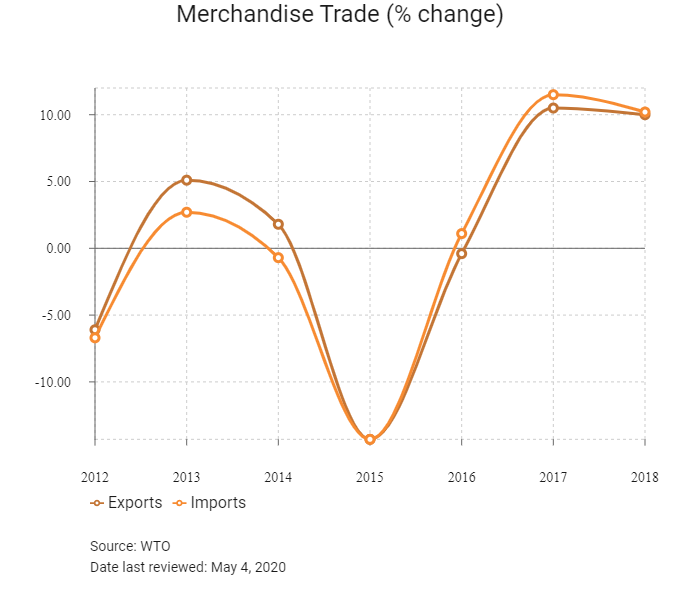 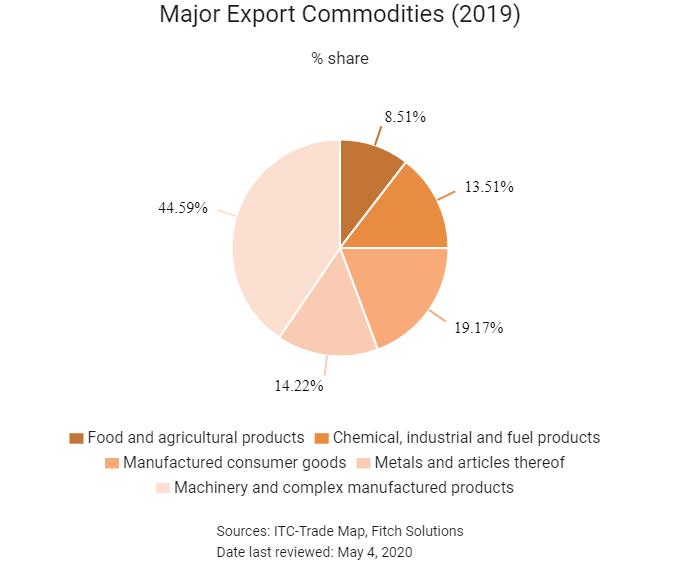 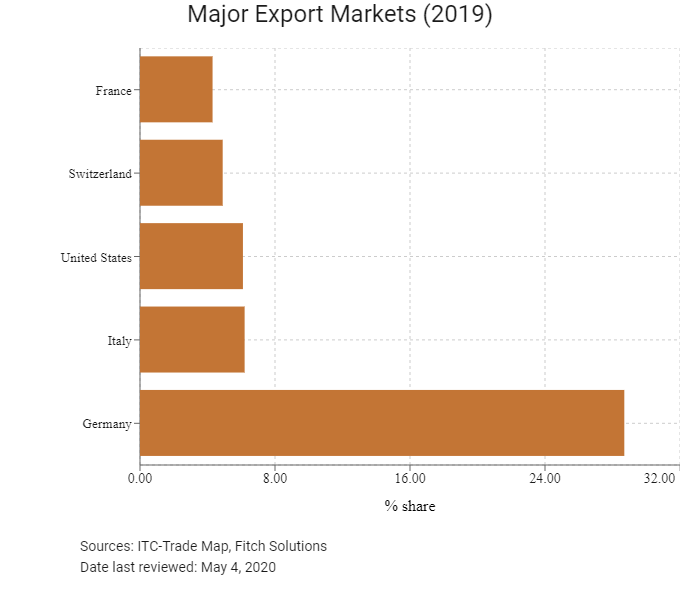 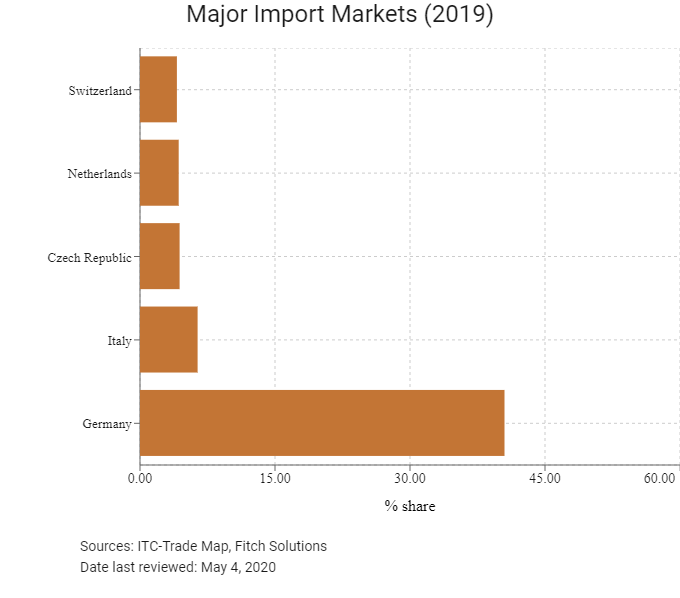 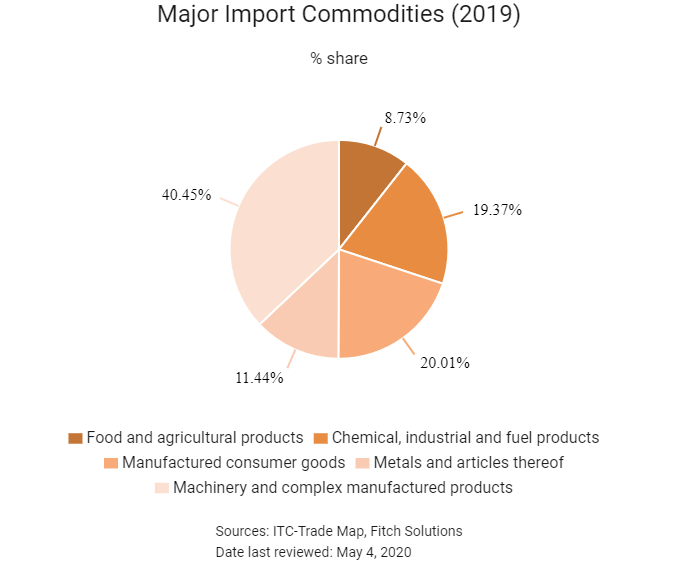 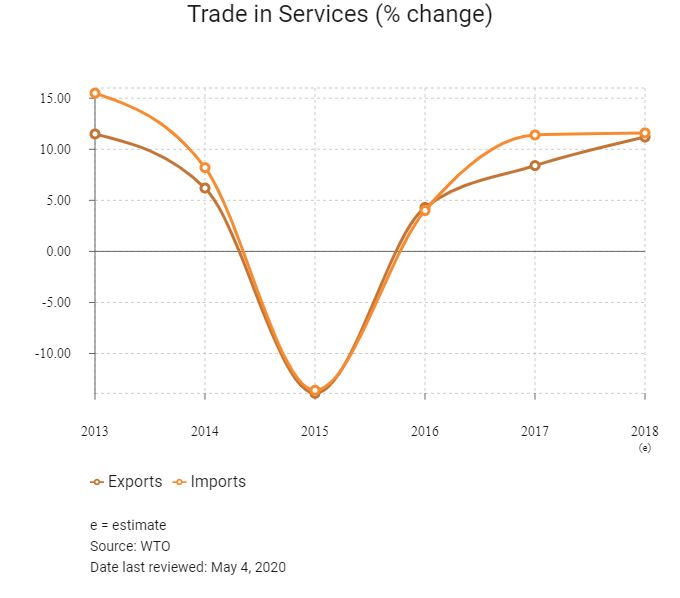 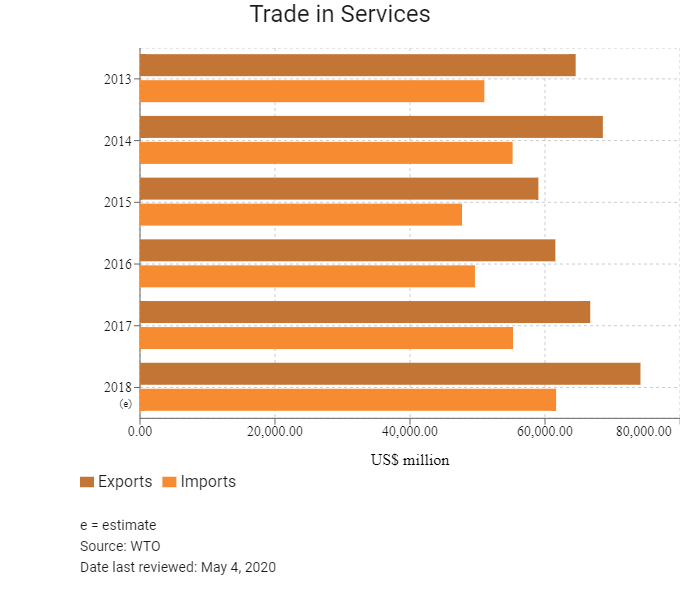 Comprehensive Economic and Trade Agreement (CETA): CETA is an agreement between the EU and Canada. CETA was signed in October 2016 and ratified by the Canadian House of Commons and European Parliament in February 2017. However, the agreement has not been ratified by every European state and has only provisionally entered into force. CETA is expected to strengthen trade ties between the two regions, having come into effect in 2016. Some 98% of trade between Canada and the EU will be duty free under CETA. The agreement is expected to boost trade between partners by more than 20%. CETA also opens up government procurement. Canadian companies will be able to bid on opportunities at all levels of the EU government procurement market and vice versa. CETA means that Canadian provinces, territories and municipalities are opening their procurement to foreign entities for the first time, albeit with some limitations regarding energy utilities and public transport. 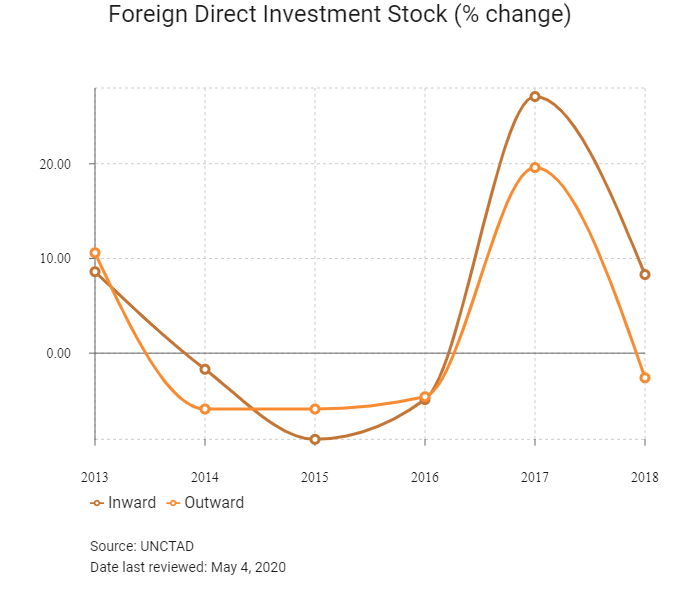 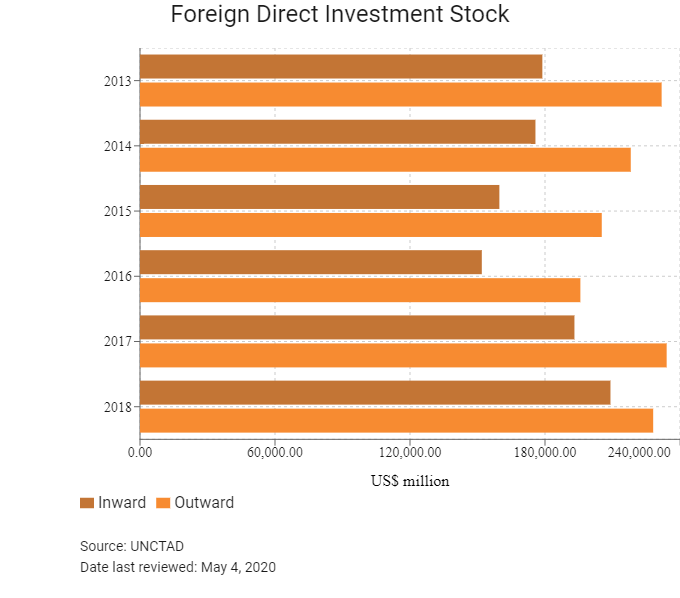 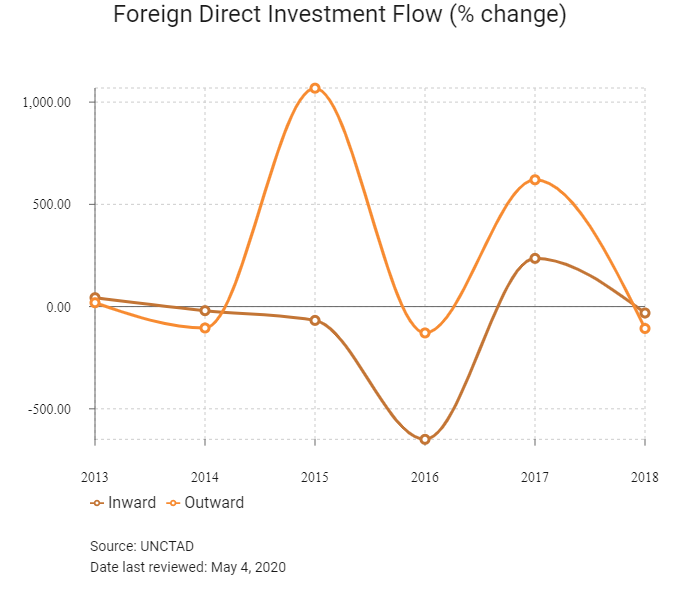 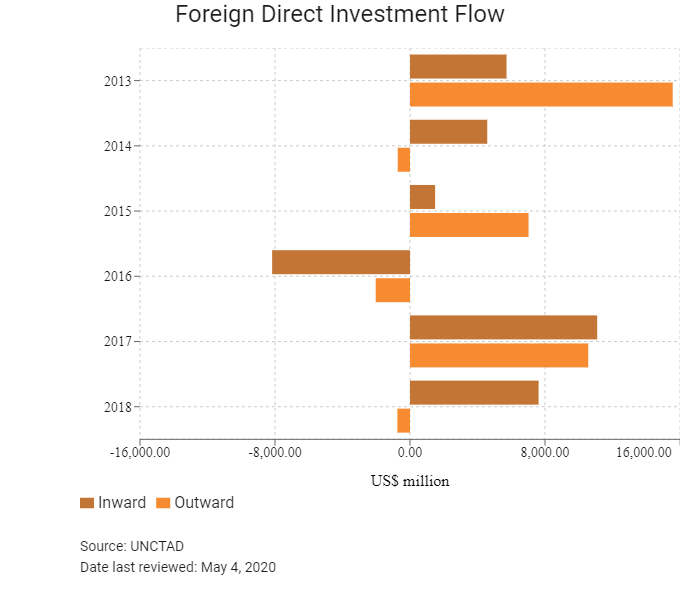 If investors want to employ foreign workers in Austria, they will need to apply for a work permit with the AMS. The AMS only grants that permission if there is no comparable person in the pool of registered unemployed persons. This does not apply to senior management positions.

Austria offers several non-immigrant business visa classifications, including intra-company transfers/rotational workers and employees on temporary duty. The recruitment of long-term overseas specialists or those with managerial duties is governed by a points-based immigration scheme to attract skilled workers and specialists in individual sectors (points are available for qualification, education, age and language skills). This Red-White-Red card (RWR) model has been designed to allow firms to react flexibly to rising demand for talent in different occupations. It is available to highly qualified individuals, qualified specialists/craftsmen in certain understaffed professions (qualified labour and registered nurse jobs) and key personnel or professionals. Applicants must have an offer of employment to apply for the RWR. Highly qualified individuals may apply locally in Austria or opt to find a potential employer from abroad and have the company apply in Austria on their behalf. Austrian immigration law requires those applying for residency permits to take German language courses and exams. In 2017 the Austrian government introduced a law that introduces a specific visa category under the RWR model for founders of start-up enterprises to support Austria's push to expand its innovation economy.

Social insurance is compulsory in Austria and comprises health insurance, old-age pension insurance, unemployment insurance and accident insurance. Employers and employees contribute a percentage of total monthly earnings to a compulsory social insurance fund. Austrian laws closely regulate terms of employment, including working hours, minimum vacation time, holidays, maternity leave, statutory separation notice, severance pay, dismissal and an option for part-time work for parents with children under the age of seven. Problematic areas include increased deficits in the pension and health insurance systems, the shortage of personnel to care for the increasing number of elderly people, and escalating costs for retirement and long-term care. Owing to employer contributions to social insurance for employees, paid leave, paid sick leave, fringe benefits and the like, additional wage costs in Austria add up to about 70% of gross pay.

No work permit is needed by foreigners from outside the EU if they have a permanent residence or family reunion permit, have been granted asylum, study in the country, or have Blue or Green Cards. Since the beginning of 2014, citizens of Romania and Bulgaria also enjoy free labour market access. For Croatian nationals, certain restrictions regarding work permits are still in place.

This type of residence and work permit allows highly qualified non-EU citizens to live and work in Austria for up to two years. It is tied to a confirmed job offer and will only be granted if the AMS is satisfied that no Austrian or EU citizen is available to do the work specified. A foreigner holding a Blue Card may reside in the country and work in the job for which the Blue Card was issued or change that job under the conditions defined.

Only applicants who have completed a university degree course of at least three years are eligible for a Blue Card. Their qualifications must match the job profile, and the salary specified in the work contract must be 1.5 times higher than the average yearly income of full-time employees in Austria. The figures are published regularly by Statistik Austria.

Non-EU citizens who qualify as 'key workers' can apply for a RWR Card, which allows them to work for a specified employer and live in Austria for a period of 12 months. In order to qualify as a key worker, one must be highly qualified, a skilled worker in a shortage occupation, a self-employed key worker or a graduate of an Austrian university. The RWR Card works on a points-based system.

The economy will cool in 2020 amid weakening global demand due to the Covid-19 pandemic and lingering external headwinds. Growth is expected to be broad based, with a tighter labour market in particular implying scope for a steady contribution of private consumption to headline growth figures in the coming years. As Austria remains highly integrated and reliant on external demand from the wider eurozone, a significant slowdown in eurozone economic activity has the potential to negatively impact Austrian growth. In terms of demographics, the influx of thousands of migrants in 2015-2016 and Austria's ageing population may present fiscal problems in the long term, with the possibility of shortfalls in the welfare and pension systems.

Austria's economy features a large service sector, a sound industrial sector and a small but highly developed agricultural sector. The Austrian economy has greatly benefitted from its strong commercial relations with the Central and Eastern Europe (CEE) region, specifically in the banking and insurance sectors. Austria has traditionally attracted a significant amount of foreign direct investment owing to its geographical location as an intersection of Eastern and Western Europe. The country's business environment ranks among the top 10th percentile globally owing to its strong logistics profile, solid legal and security environments, and investor-friendly trade and investment policies. Austria's large and competitive manufacturing sector as well as highly developed service industry equips the economy to grow at a robust pace over the coming decade. The main headwinds the country will face over the medium term arise from stalling reform momentum, a rigid labour market and rising competition from neighbouring CEE, while a weakened global outlook will drag on investment in the near term. 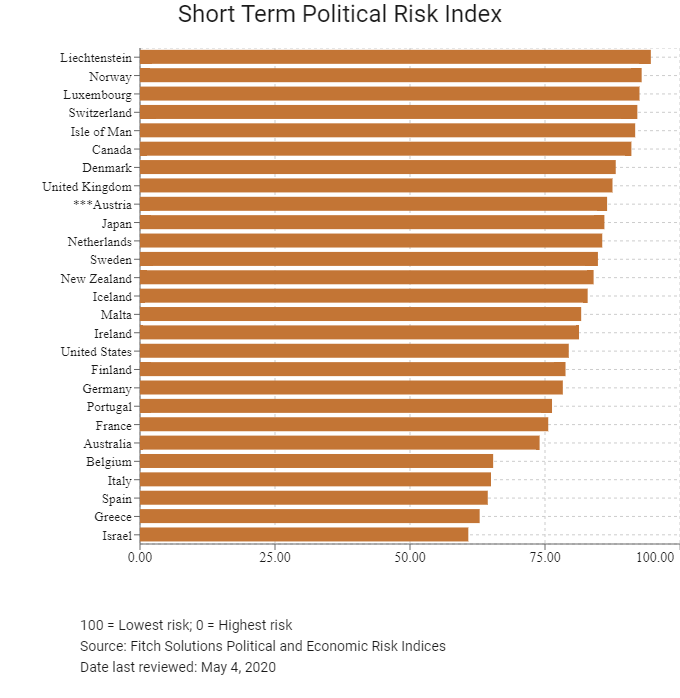 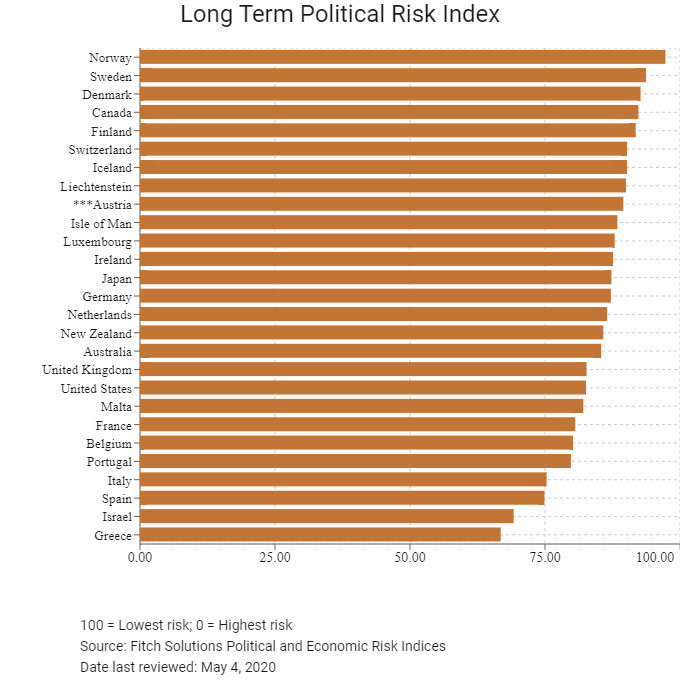 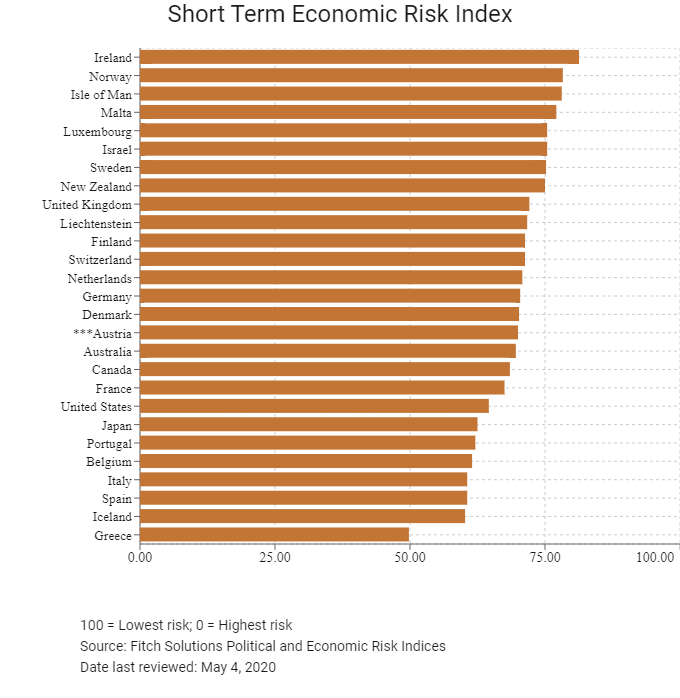 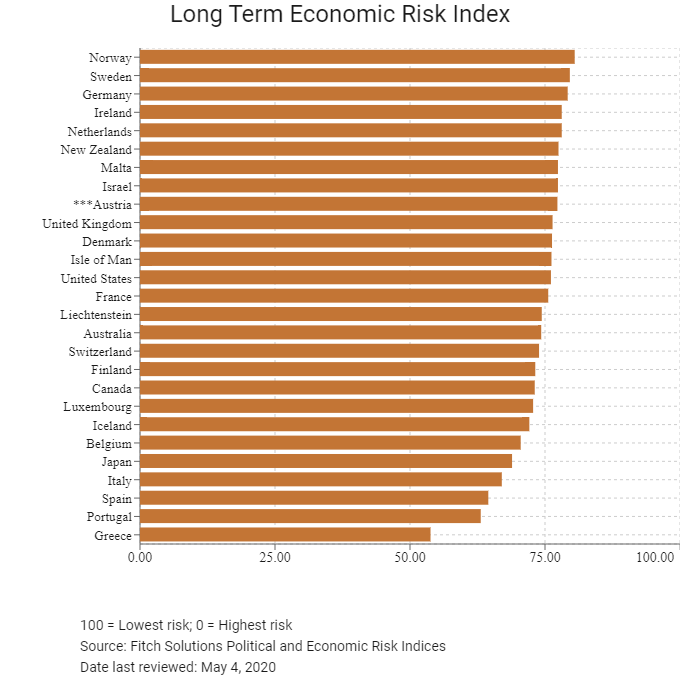 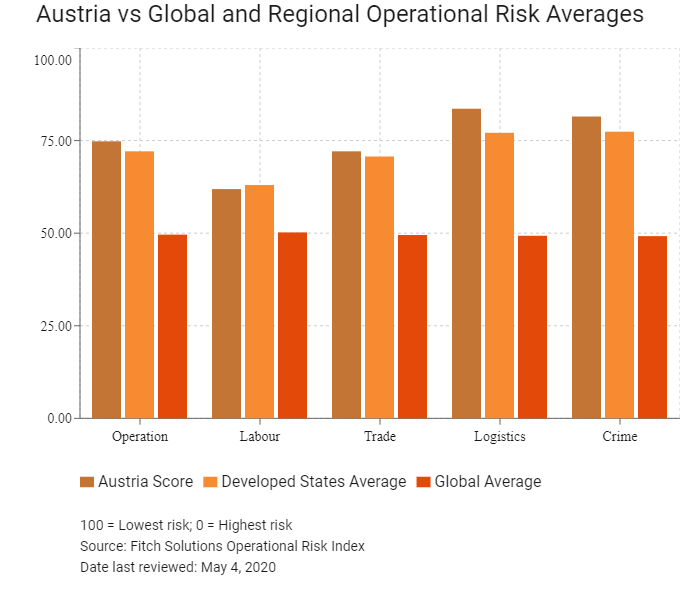 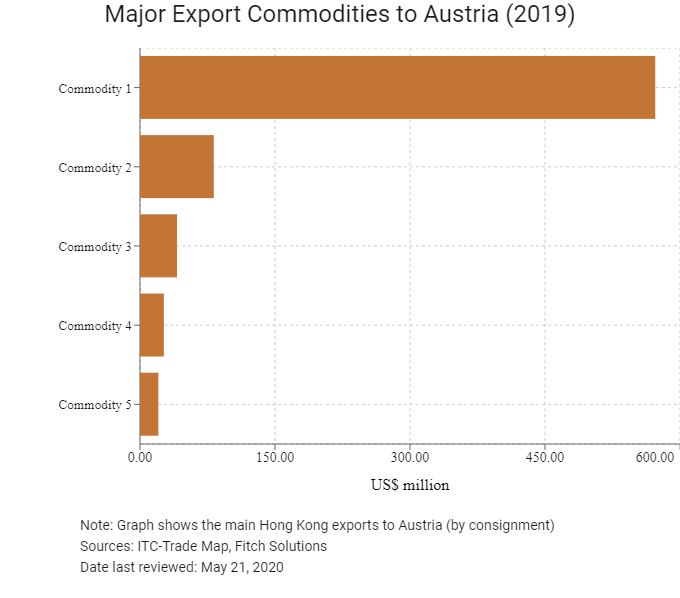 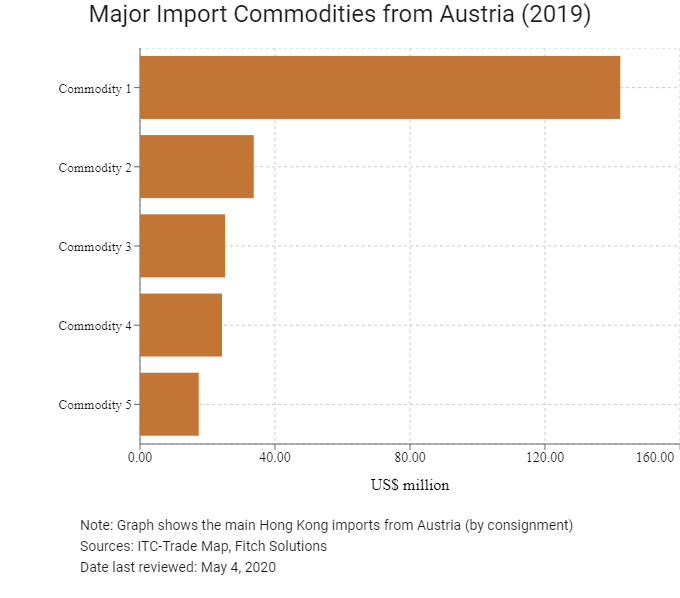 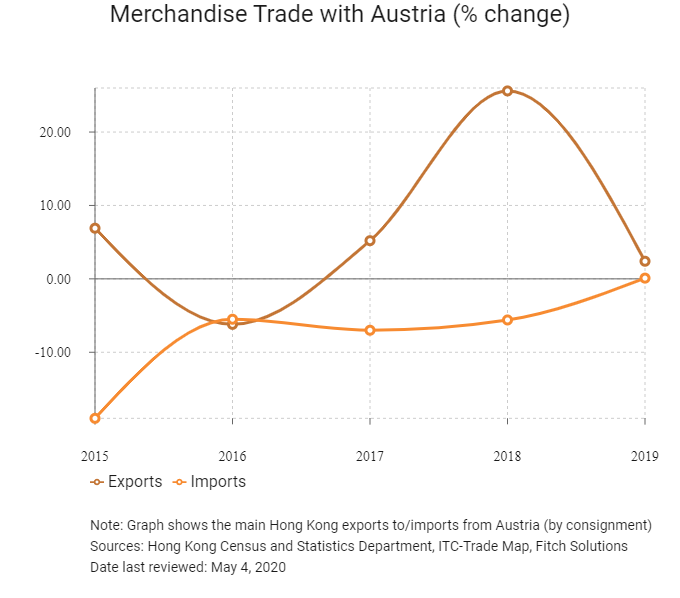 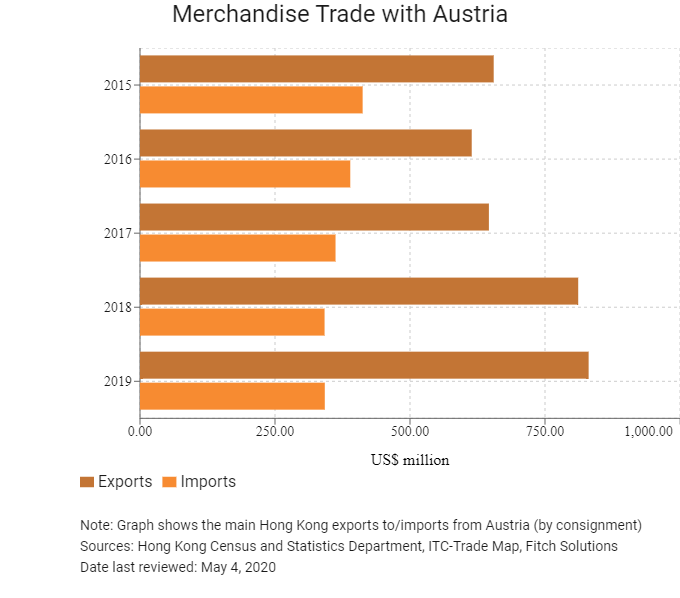 Treaties and agreements between Hong Kong and Austria

Austria and Hong Kong signed a comprehensive double tax agreement in May 2010, with the agreement effective from July 2013.

HKSAR passport holders can travel to the Schengen Zone without a visa. They can travel for tourism and business purposes and remain in the region for a period of up to 90 days.