October 2018
Novatek announced the discovery of a new gas field in the Ob Bay area, which was estimated to hold natural gas reserves of more than 300 billion cubic metres. The discovery was made via an exploration well in the North-Obsk license area.

December 2018
OPEC, Russia and other allies agreed to further limit oil production in an attempt to boost failing oil prices.

June 2019
The Russian Prime Minister Dmitry Medvedev approved the plans for the construction of a toll motorway that will cut cargo shipping time and ease trade between Mainland China and Europe. The USD9.3 billion 2,000km 4-lane highway project, termed the Meridian highway, would stretch from the Russia-Kazakhstan border to existing road networks near the Russia-Belarus border.

June 2019
On June 7, 2019 new legislation was passed in Russia requiring manufacturers of the 735 medicines on the country’s Vital and Essential Drugs List to re-register prices with the Russian Ministry of Health. As part of the re-registration process, prices would be reassessed using external reference pricing methodology. After re-registration, manufacturers will be obliged to reduce prices in line with downwards price changes in reference countries.

July 2019
Construction started on a cableway at the Mainland China-Russia border. The 972m-long cableway would span the Heilongjiang River, known in Russia as the Amur River, and would connect Heihe in northeast Mainland China's Heilongjiang Province with the Russian city of Blagoveshchensk. The project was designed for two-way traffic and each cable coach would have a capacity to carry 80 people. The system would be able to carry six million people annually, with each one-way ride expected to take less than 10 minutes. The cableway was slated to become operational in 2021.

December 2019
Russia's agriculture safety watchdog said it would lift the temporary restrictions on poultry supplies to Russia from a plant in Brazil.

January 2020
Russia's President Vladimir Putin accelerated a shake-up of the country's political system by submitting a constitutional reform blueprint to parliament that would create a new centre of power outside the presidency. In draft amendments submitted to the State Duma lower house, Putin offered a glimpse of how his reforms look on paper. Under his plan, some of the president's broad powers would be clipped and parliament's powers expanded.

March 2020
The government announced a comprehensive economic stimulus package worth USD18 billion to ease the challenges faced by business, consumers and the financial sector due to Covid-19.

Saudi Arabia and Russia, the world’s two largest oil exporters, failed to agree on production cuts to increase global oil prices. As a result, Saudi Arabia drastically decreased the price of its oil, causing the global oil price to drop by about 30%, below Russia’s breakeven level.
Covid-19 lockdowns across various countries resulted in the demand for oil decreasing by about a third. 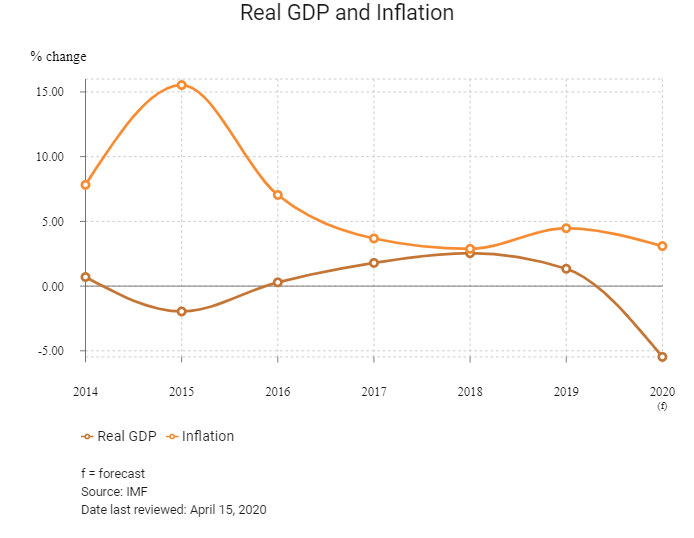 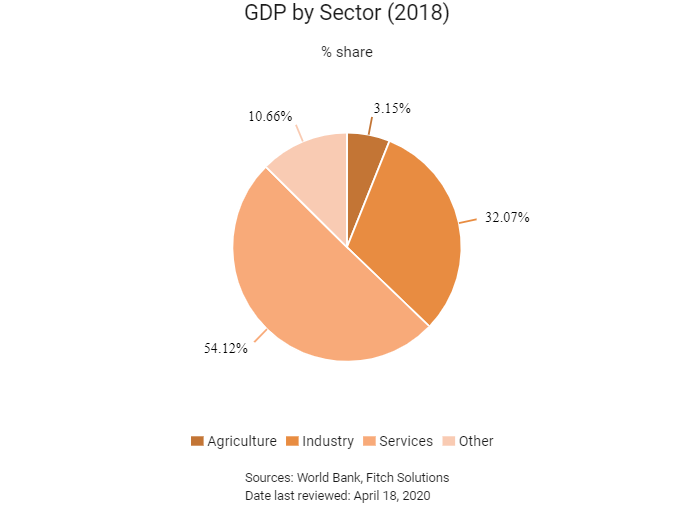 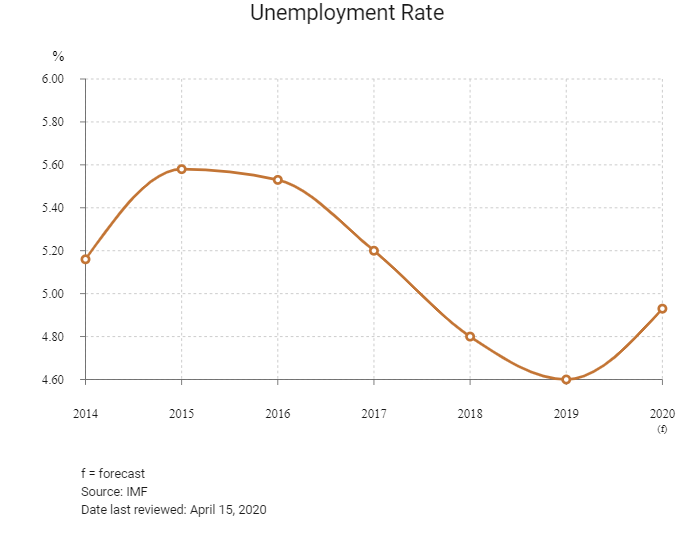 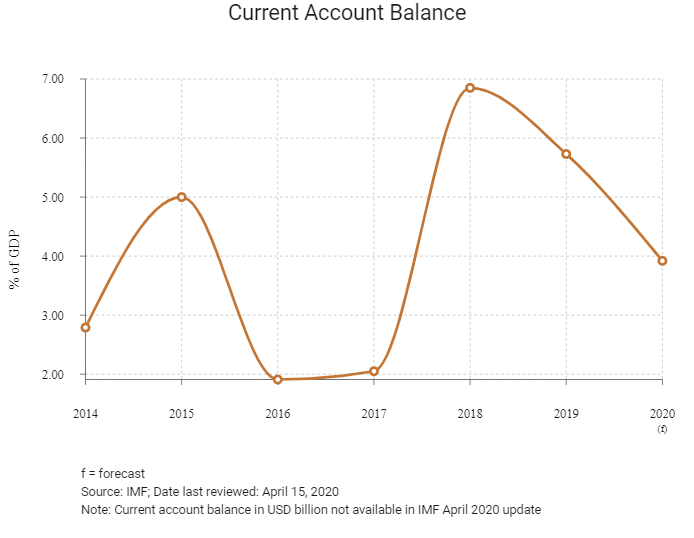 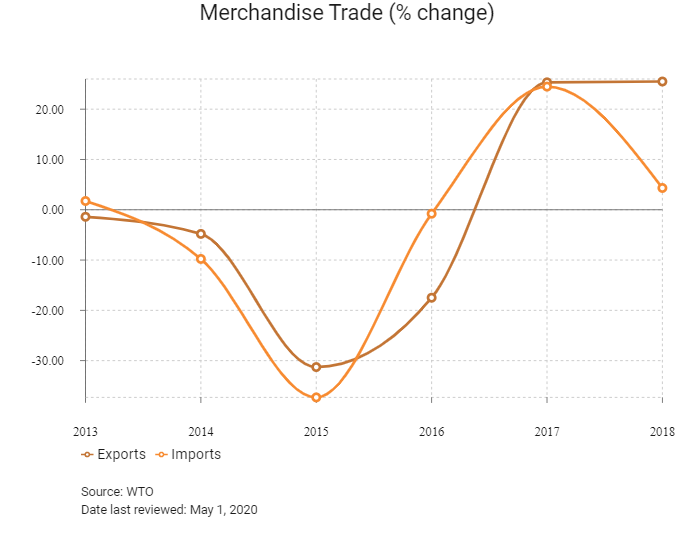 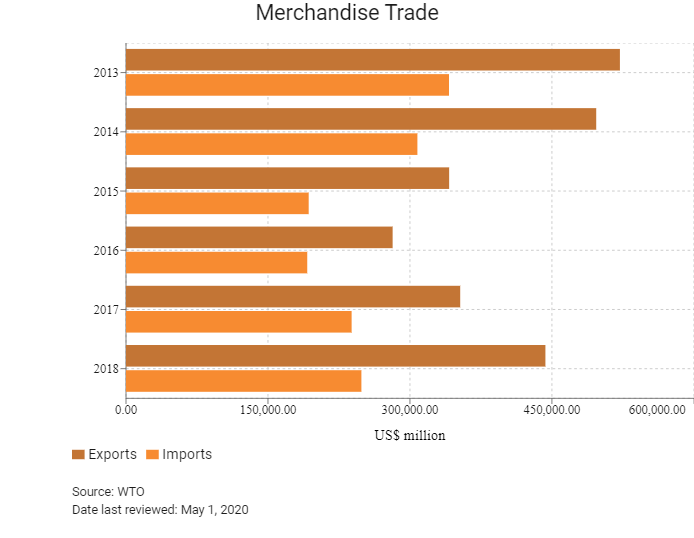 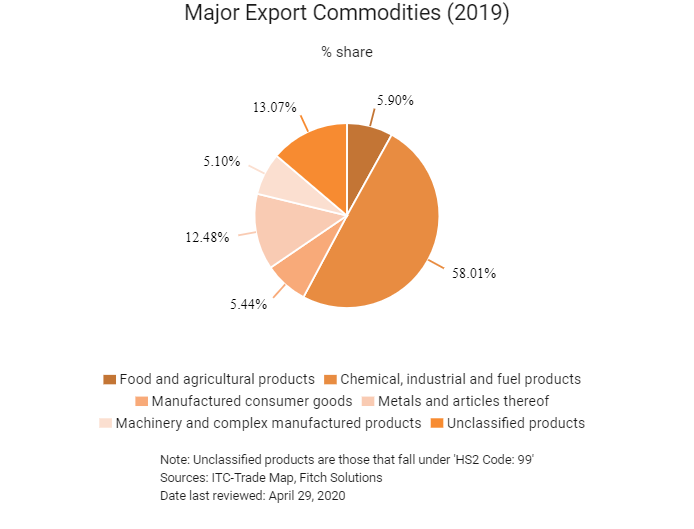 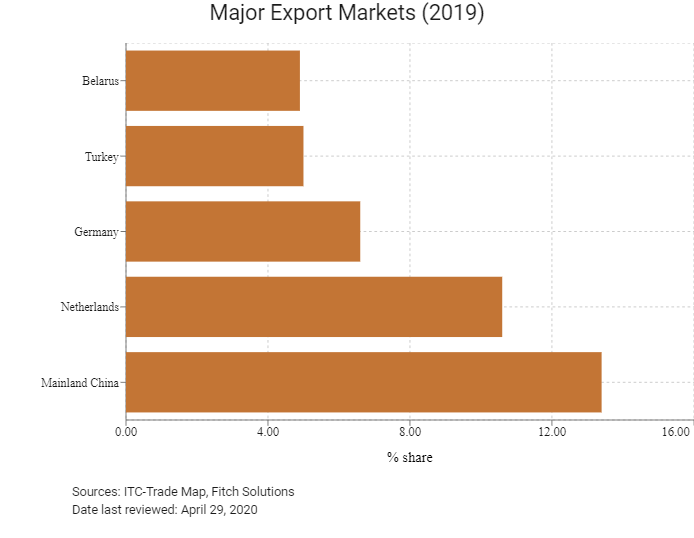 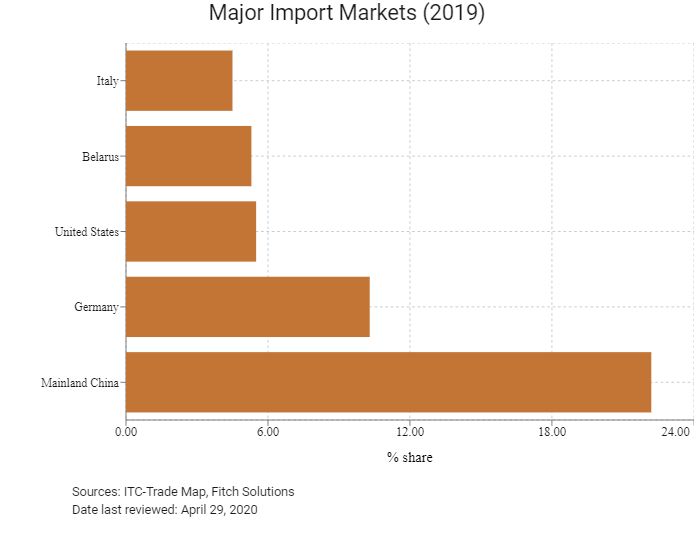 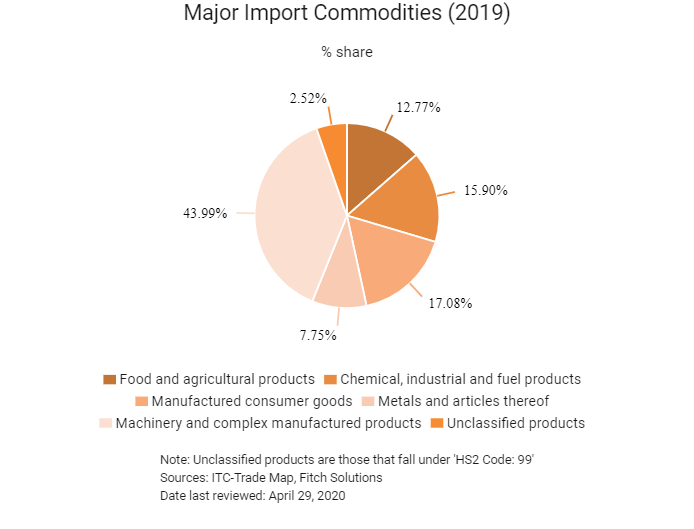 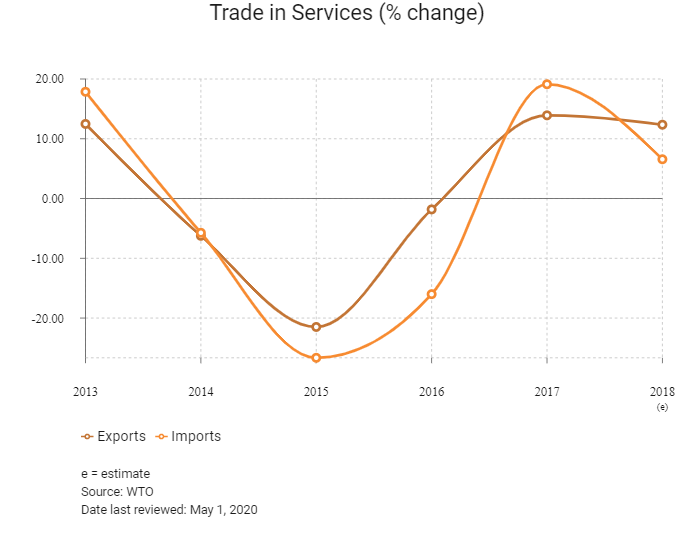 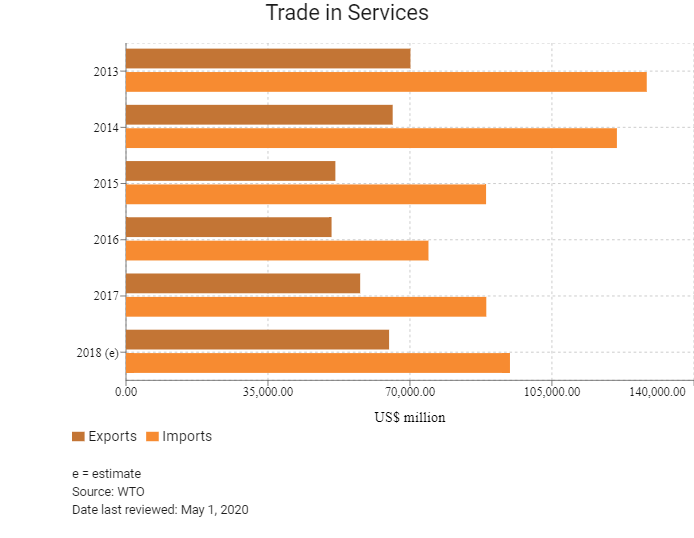 EEU: The EEU consists of Armenia, Belarus, Kazakhstan, Kyrgyzstan and Russia. The agreement, which is based on the Customs Union of Russia, Kazakhstan and Belarus, entered into force on January 1, 2015. It was later joined by Armenia and Kyrgyzstan. The union is designed to ensure the free movement of goods, services, capital and workers between member countries. However, trade between the various member states is limited and many customs disputes between member states remain unresolved. Most importantly, Ukraine's exit from discussions following the Euromaidan protests has significantly undermined the prospects for success by excluding what would have been the EEU's second-largest economy.

Commonwealth of Independent States FTA: The Commonwealth of Independent States (CIS) is comprised of Kyrgyzstan, Russia, Ukraine, Belarus, Uzbekistan, Moldova, Armenia and Kazakhstan. The first treaty entered into force on September 20, 2012. CIS states remain key trade partners, but Russia has suspended the application of the FTA for bilateral trade with Ukraine, meaning that barriers have been raised with Russia's largest trade partner within the group.

EEU-Serbia: The EEU and Serbia signed a FTA on October 25, 2019. The agreement replaces the existing agreements between Serbia and Russia, Belarus and Kazakhstan. Approximately 90% of Serbia’s exports to the EEU are destined for Russia. The FTA is expected to increase Serbia’s EEU exports by 50% within the first three years. 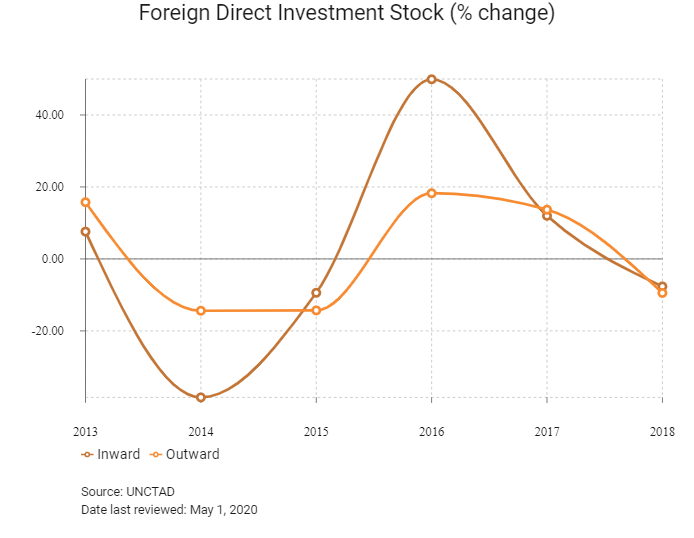 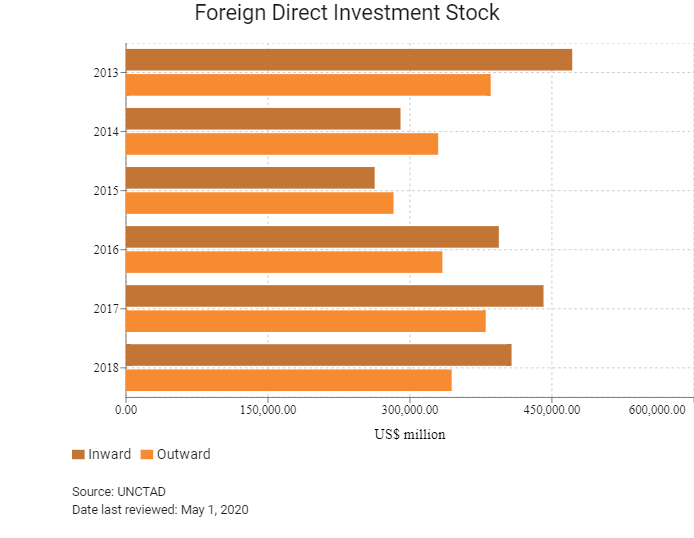 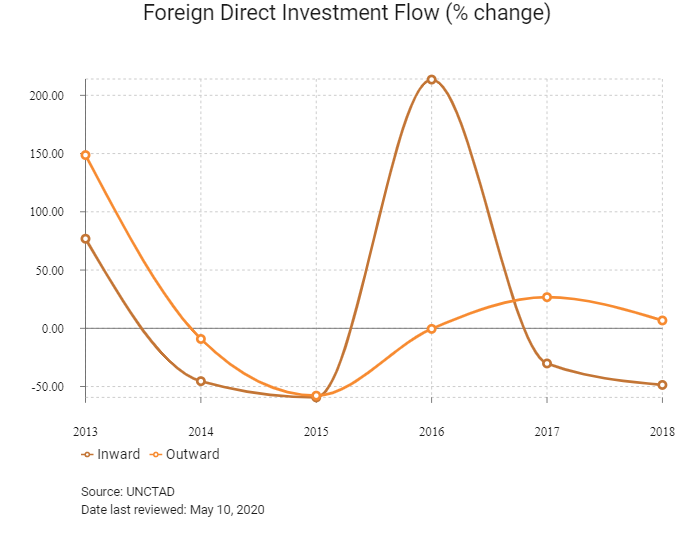 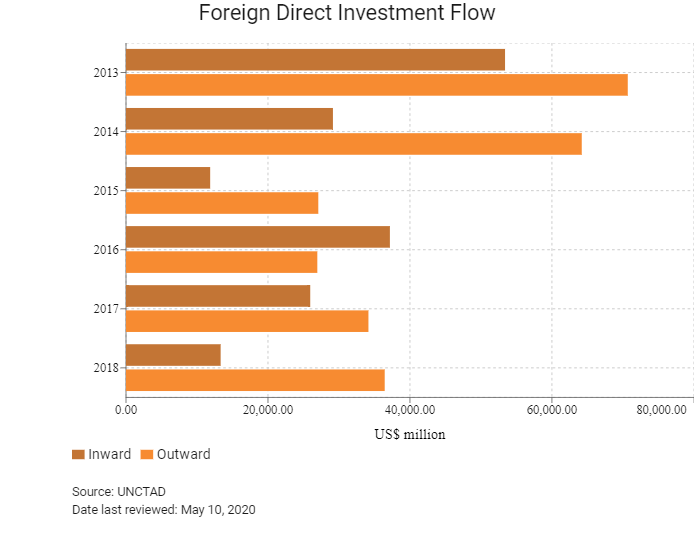 Performance requirements, such as job creation or investment minimums, can be imposed as a condition for establishing, maintaining or expanding an investment. Securing a work permit in Russia is the employer's responsibility and the deadline for the foreign labour requirement falls on May 1 annually.

There are three types of work visas in Russia: first, the single-entry visa, which lasts for 90 days and is issued by the Russian consulate on the basis of a work visa invitation; second, the multiple-entry visa, which is reissued on the basis of a single entry at a local branch of the Russian Federal Migration Service; third, the Highly Qualified Specialists (HQSs) visa for specialists who earn more RUB2 million per year.

The cost and duration taken to acquire a working visa in Russia varies according to the country of an individual's origin. If permits are required, the complicated and time-consuming application process raises costs for employers and there is considerable risk for the employer as the information given in the application is binding.

The application requires details of the position they intend to fill, as well as the nationality of the expat. The process can take up to a year and once granted a permit is valid only for the specific job it was issued for and cannot be transferred to different companies or subsidiaries of companies in other regions in Russia.

If the employer requires the employee to work in different parts of the country, the application must be completed for every region the employee will work in.

Any foreign citizen who works in Russia must hold a work permit or patent, and the employer or purchaser of work (services) of such foreign citizen must hold a valid employer permit. Effective from January 2015, foreign nationals who apply for a work permit, patent, temporary residence permit or permanent residence permit are required to present a certificate confirming their knowledge of Russian language, history and basics of Russian law.

Overall, securing a working visa in Russia is both complex and relatively expensive, presenting bureaucratic and cost burdens to investors looking to import foreign labour. Russian immigration authorities operate a visa quota system for foreign workers. Immigration authorities have been given powers to revoke quota allocations to employers if they are found to be in breach of Russian labour and tax laws.

A beneficial immigration regime is available for highly qualified foreign nationals working in Russia who are employed by Russian companies or Russian branches and representative offices of foreign companies. These individuals are referred to as HQSs. To qualify for this permit, foreign specialists must be compensated with no less than RUB2 million per year. The permit can be issued for up to three years. The Russian language requirement does not apply to the processing of work permits and permanent residence permits for highly-qualified professionals.

Visas are issued by diplomatic missions or consulates of Russia, the Ministry of Foreign Affairs or the Ministry of Internal Affairs (directly or by proxy). Visas can be single-entry, double-entry or multiple-entry. Ordinary visas are divided into private, business, tourist, study, work, humanitarian and entry visas for persons seeking asylum. Foreign citizens from most CIS countries and those who are permanent or temporary residents of Russia do not need entry visas.

ECONOMIC RISK
Russia's economic performance compares relatively well against other emerging market peers due to low public debt ratios, high FX reserves and a current account surplus. The government is expected to embark on a much looser fiscal trajectory over the coming months to cushion the Covid-19-induced economic fallout. Hit by the coronavirus outbreak and collapsing commodity prices, the Russian economy will contract in 2020. However, after years of fiscal consolidation and deleveraging, the country is now better placed to avoid a financial crisis and usher in a stronger recovery, with growth likely to rebound in 2021.

OPERATIONAL RISK
While access to a large labour market, strong urban transport links, vast natural resources and a robust financial sector are key factors that are supportive of economic activity in Russia's long-term outlook, the market remains hamstrung by structural challenges that highlight the slow pace of reform over the years. Businesses operating in Russia face risks stemming from high levels of government intervention in the economy, an infrastructure deficit in some areas and an ageing population. However, the development of the Asia-Europe land bridge will strengthen Russia's international trade links while need to reduce the burden of state-owned enterprises has ensured that privatisation climbs up the agenda. Looking ahead, further delays to the government's infrastructure investment programme, uncertainty over US sanctions, volatile commodity prices and global trade tensions signal key near-term risks. 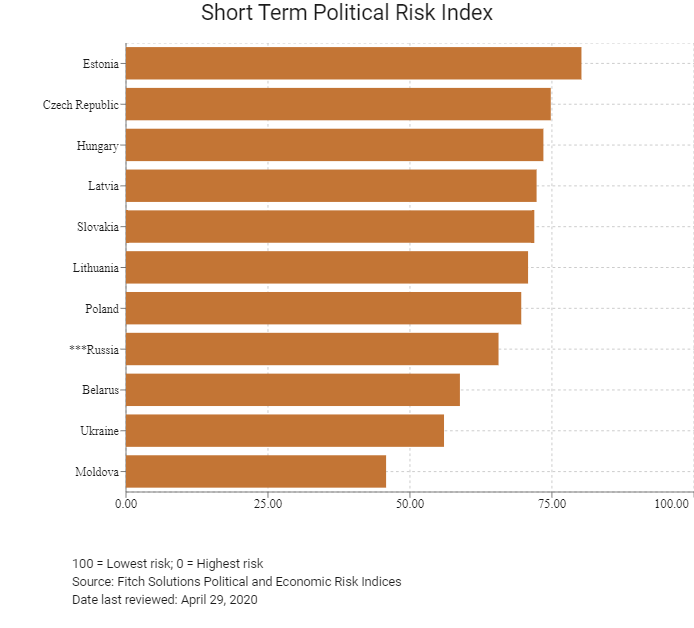 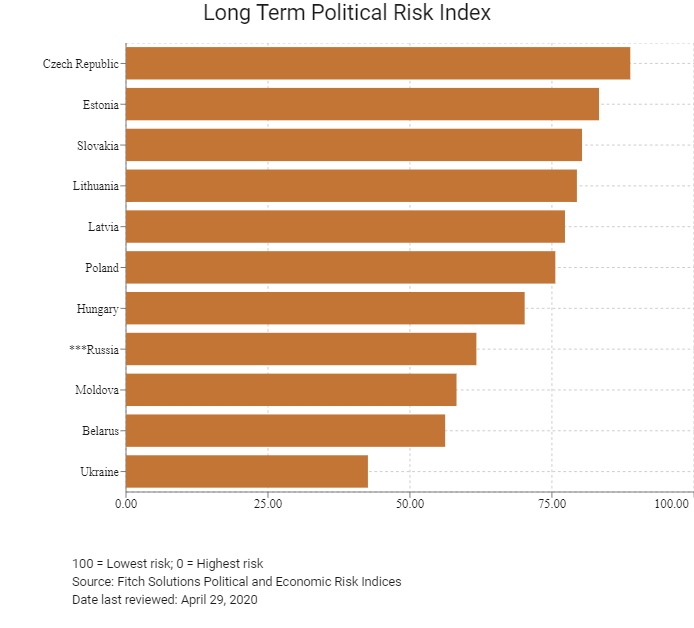 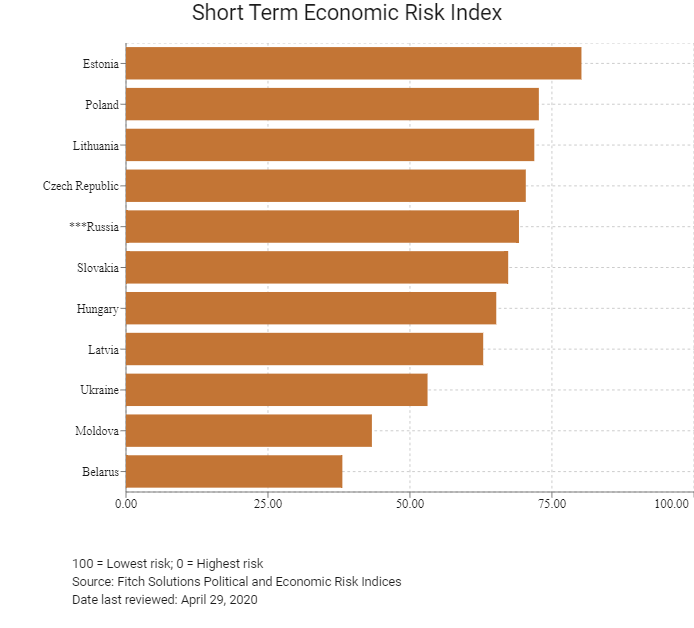 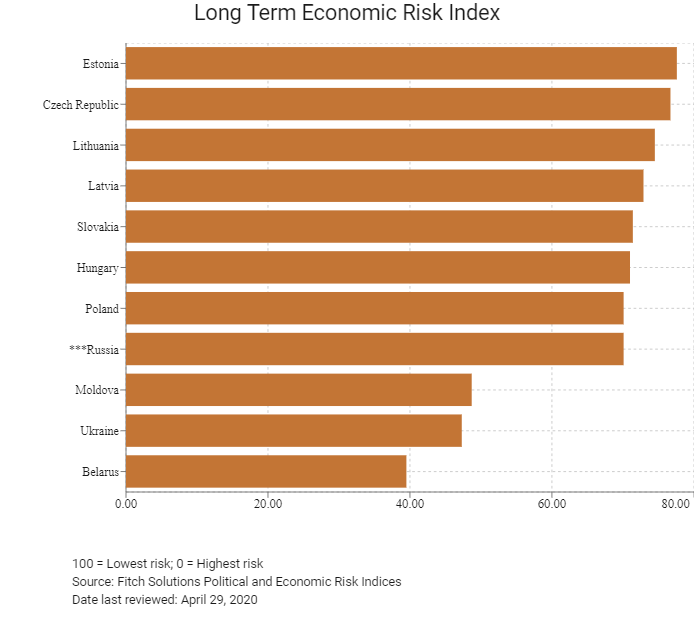 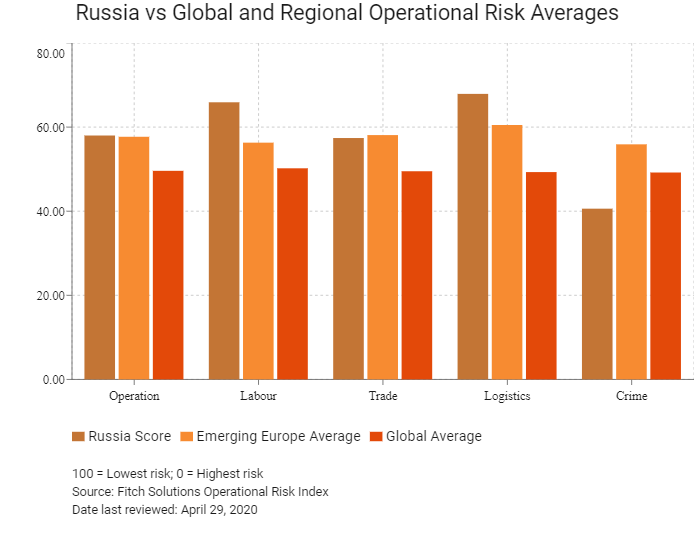 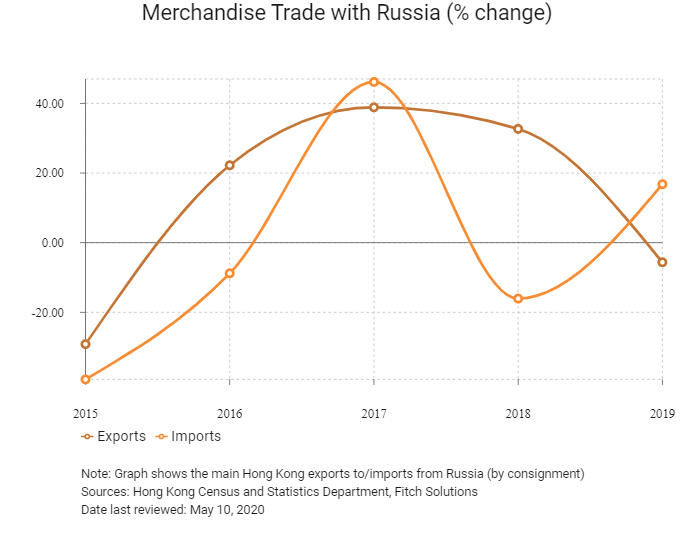 Treaties and agreements between Hong Kong and Russia

Source: Consulate General of the Russian Federation in Hong Kong 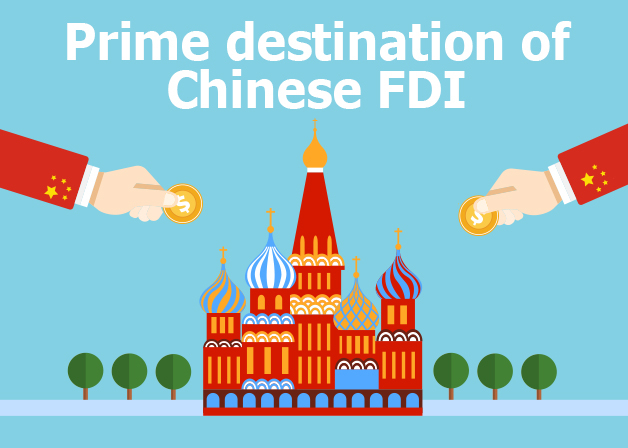 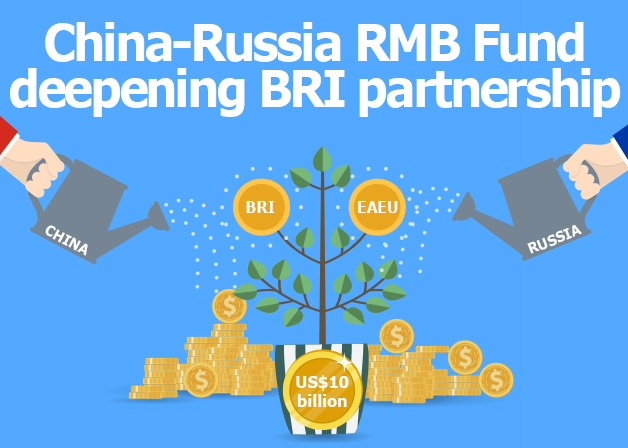 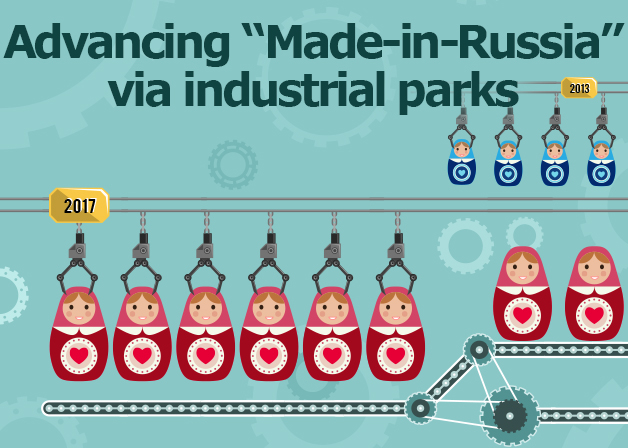 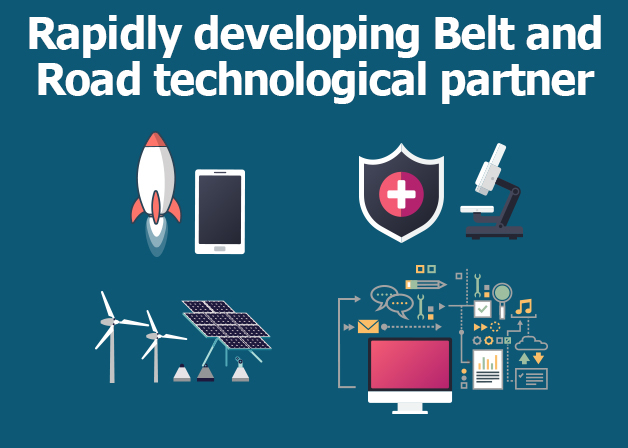 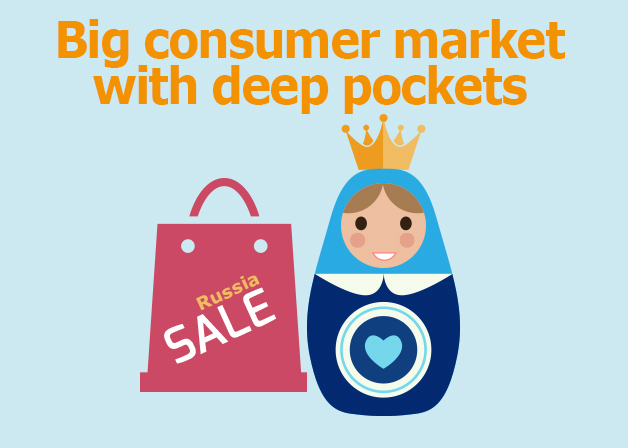 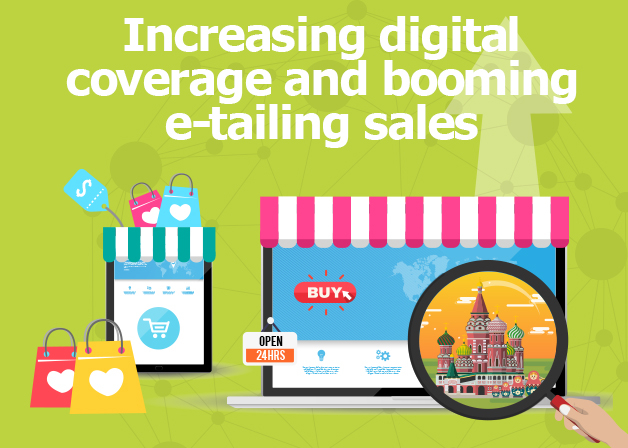