Maintaining an open investment climate has been a key element of the Czech Republic's transition to a functioning market economy. As a member of the European Union (EU), with an advantageous location in Europe, a relatively low-cost structure and a well-qualified labour force, the country is an attractive destination for foreign investment. Real GDP growth peaked in 2017, but will remain solid over the coming years and outperform the wider EU. On the back of strong household demand, the trade surplus will slightly narrow, but the country's current account will stay relatively balanced in the years ahead. However, in the absence of strong productivity gains, the country's tight labour market will put upward pressure on unit labour costs and begin to weigh on the country's competitiveness.

January 2018
Presidential elections were held over two rounds and Miloš Zeman was elected for a second term.

June 2018
Andrej Babiš was reappointed as the Prime Minister.

July 2018
A coalition government was formed.

September 2018
The railway infrastructure authority in the Czech Republic started building civil structures for the construction of the Prague-Zahradní Město and the Praha-Eden stations in the 10th Prague district. The stations would be built as part of a project to construct a four-rail track that was proposed to have a line speed of 120km/h. The project entailed an overall cost of CZK4.4 billion, of which CZK3 billion was funded by the EU.

June 2019
On June 27, 2019, Czech Prime Minister Andrej Babiš survived a vote of no confidence over alleged conflict of interest and EU subsidies fraud. The final count came in at 85 against and 85 for, while another 30 members of parliament abstained from the vote.

January 2020
The Czech Republic and the Republic of Somaliland were reportedly in talks to boost their bilateral trade relations. According to the Somaliland delegation, Czech Republic investors could enormously benefit from the existing, vast investment opportunities in the areas of agriculture, fisheries, tourism, infrastructure and livestock.

April 2020
The Czech Senate granted the central bank powers to buy a wider scope of assets in markets and adopted other measures giving businesses and people some relief from restrictions imposed to curb the coronavirus outbreak. 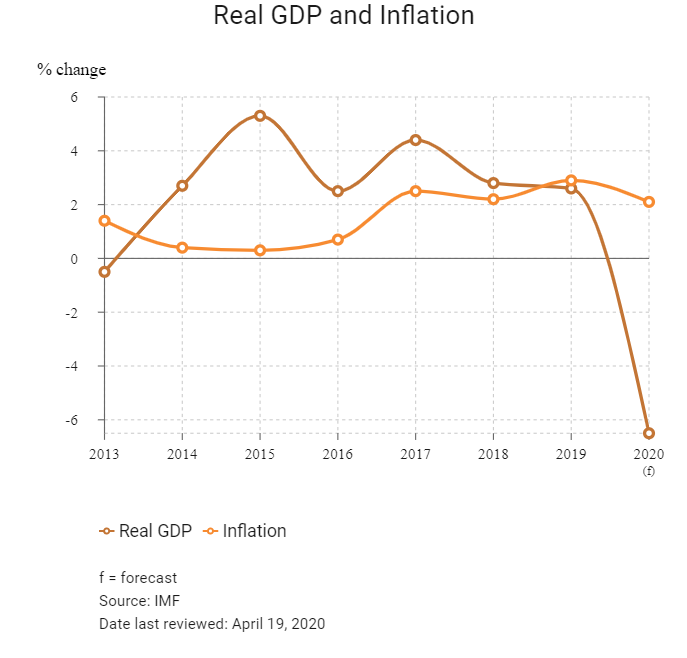 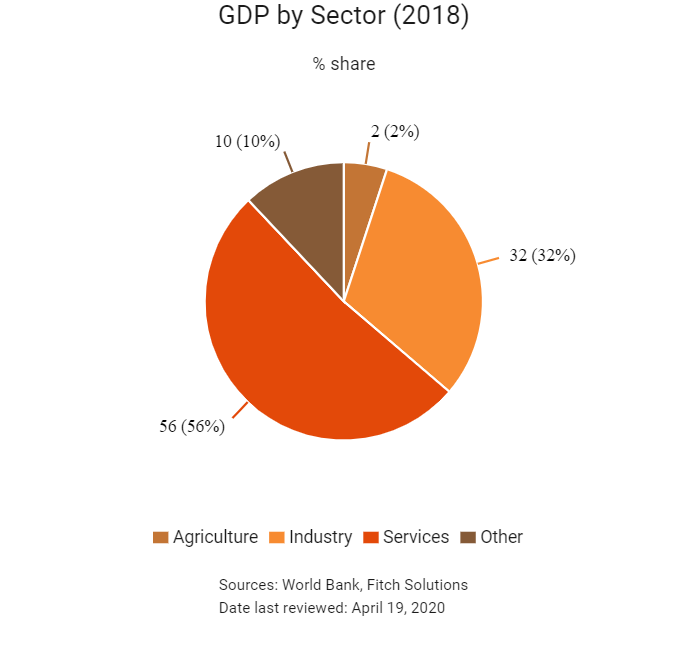 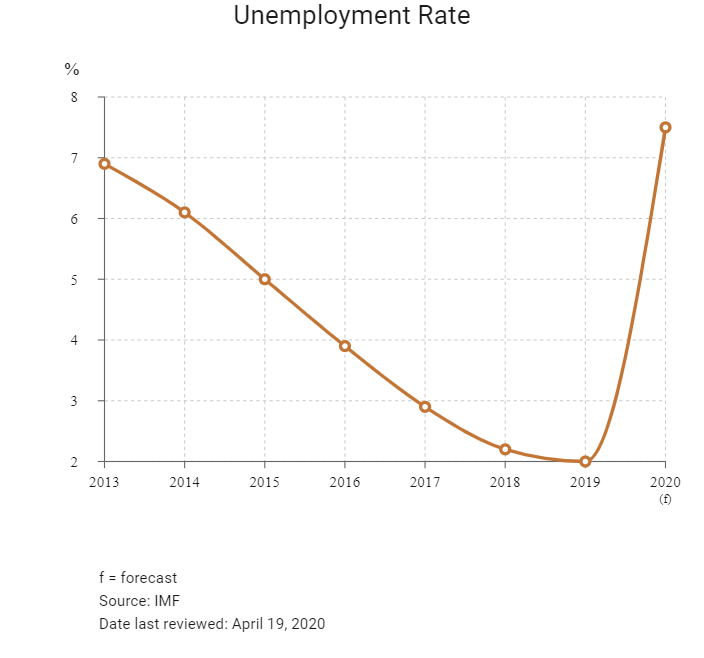 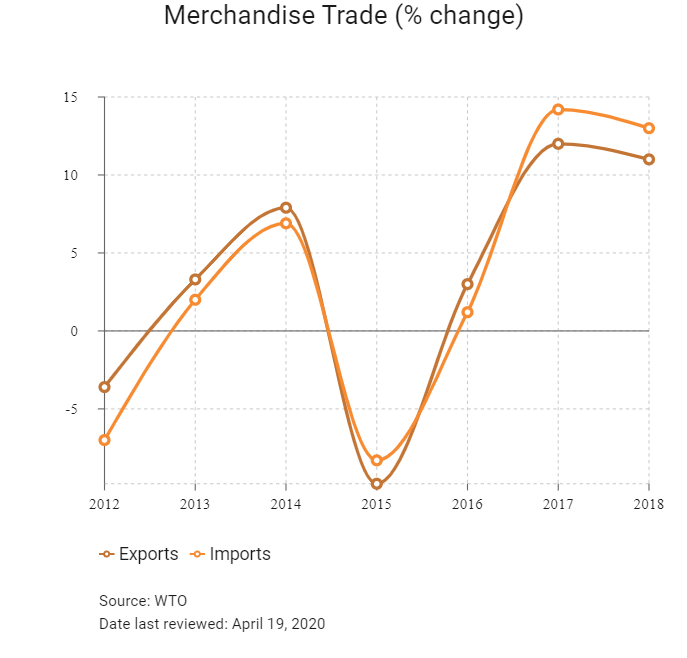 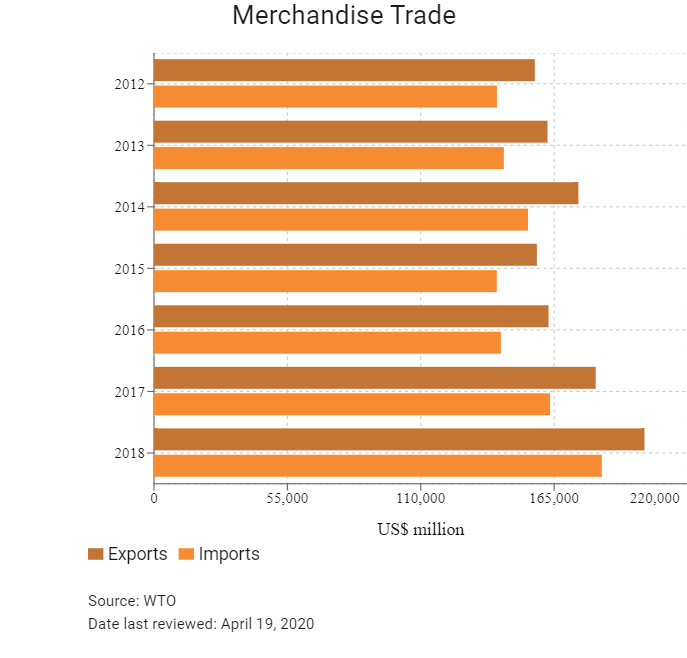 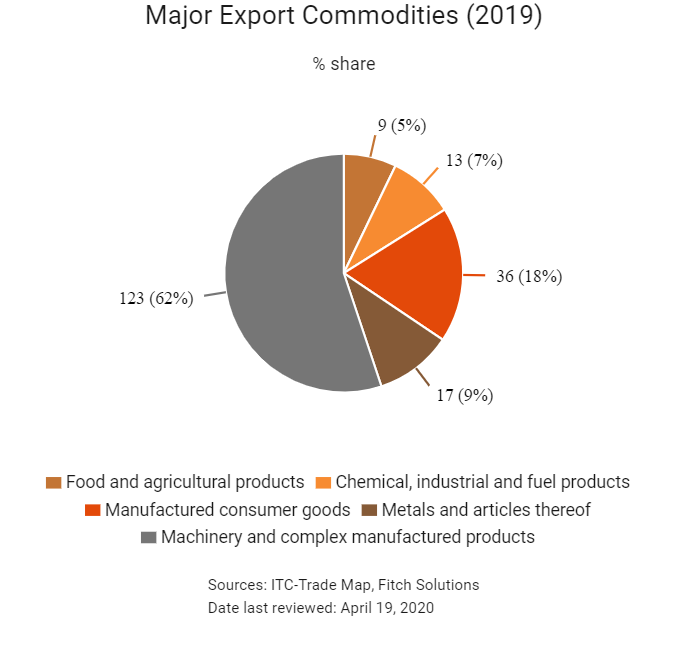 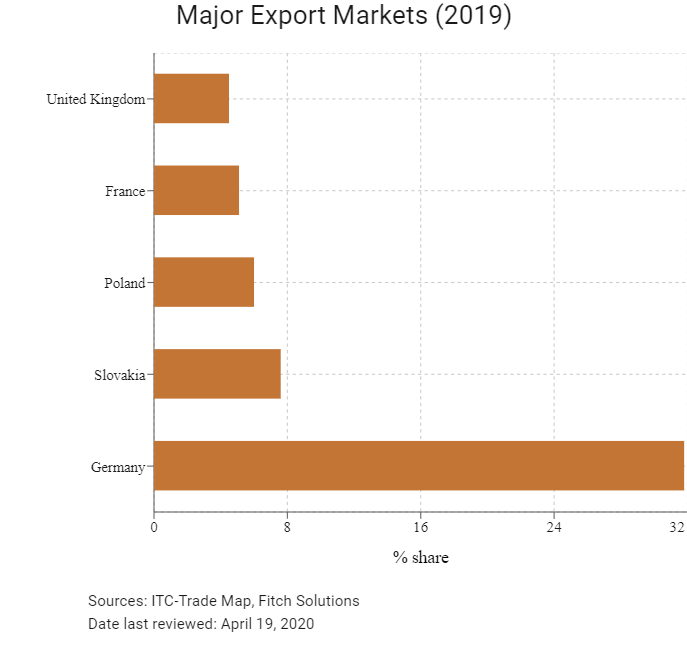 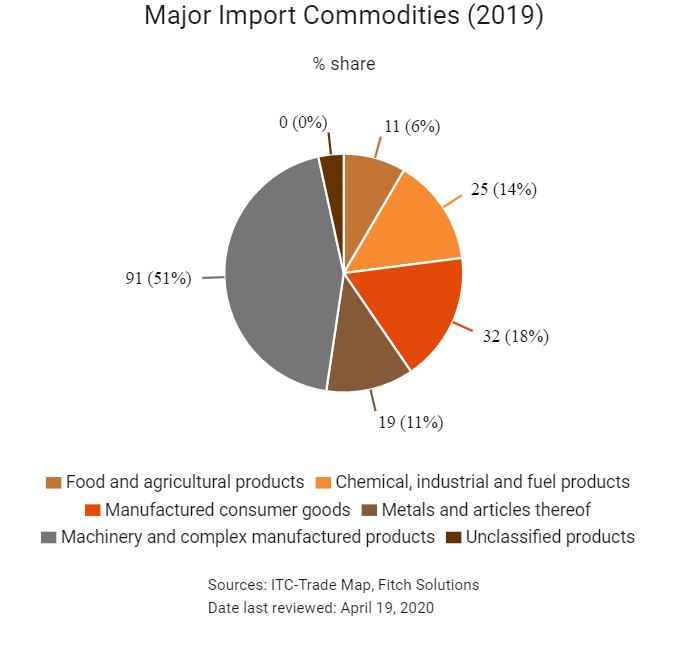 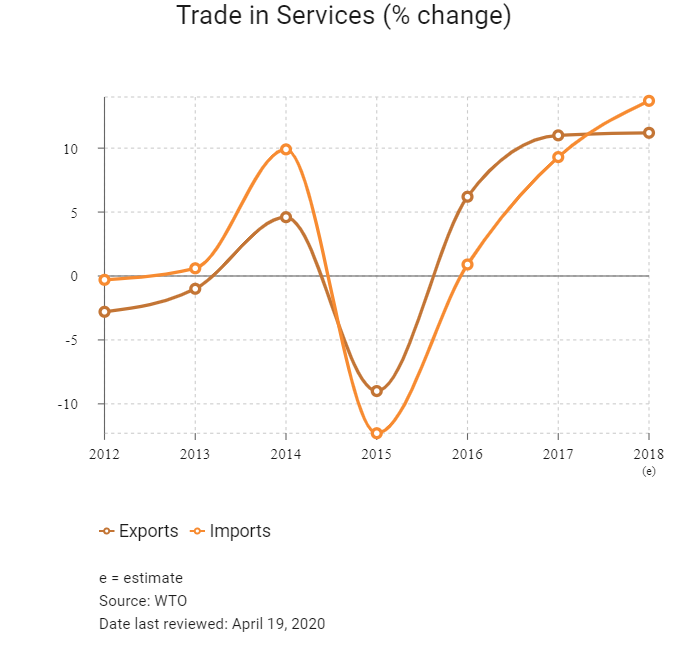 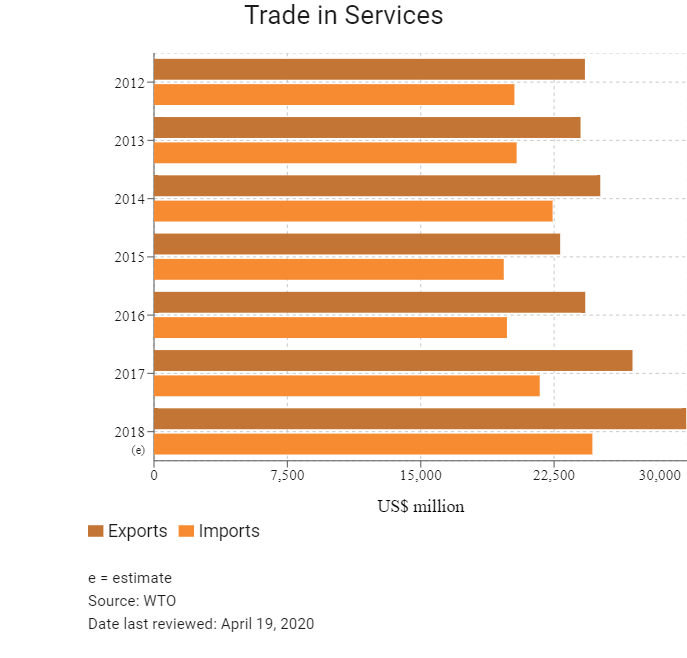 EU-Central America Association Agreement (Guatemala, El Salvador, Honduras, Nicaragua, Costa Rica, Panama, Belize and the Dominican Republic): An agreement between the parties was reached in 2012 and is awaiting ratification. The agreement has been provisionally applied since 2013. The EU and Central America meet annually to discuss issues and best practices related to the implementation of the agreement, and the most recent meeting of the Association Committee and sub-committees was held in Antigua, Guatemala between June 18, 2019, and June 27, 2019. 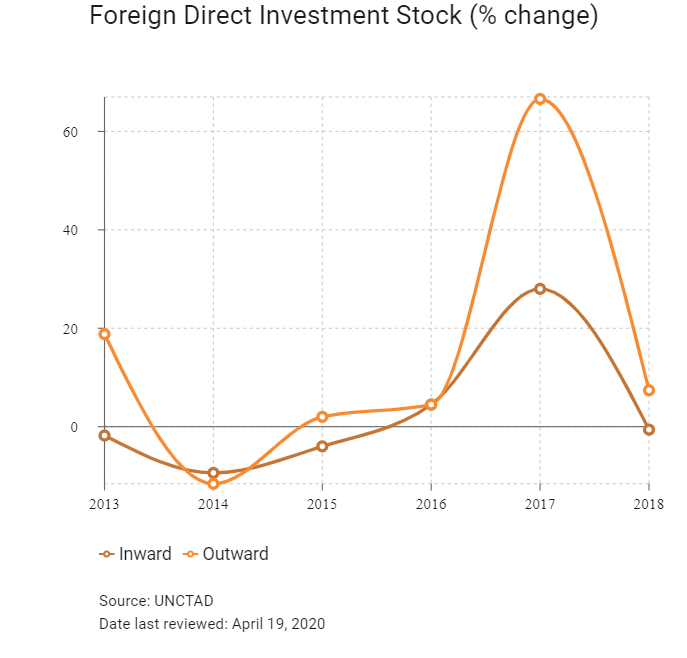 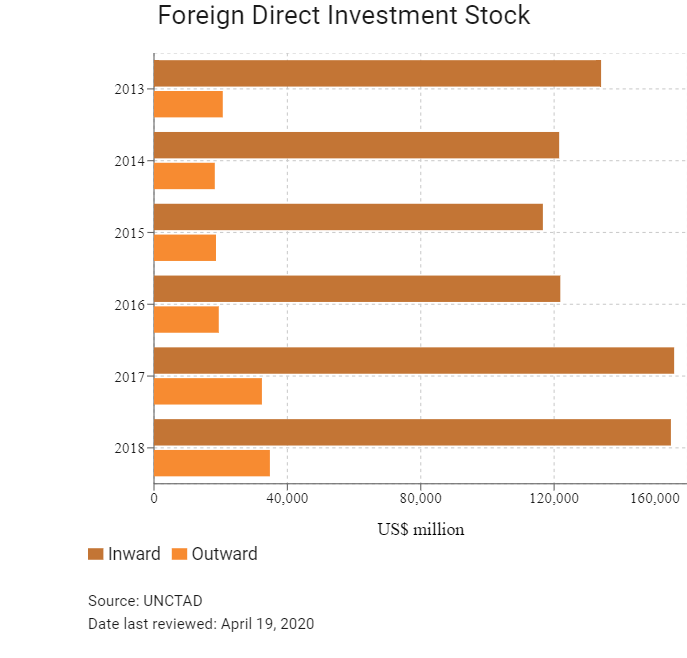 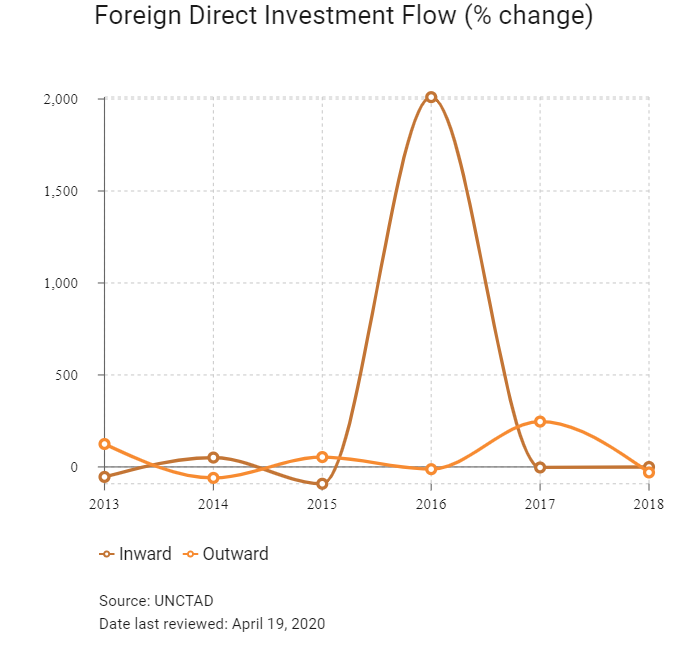 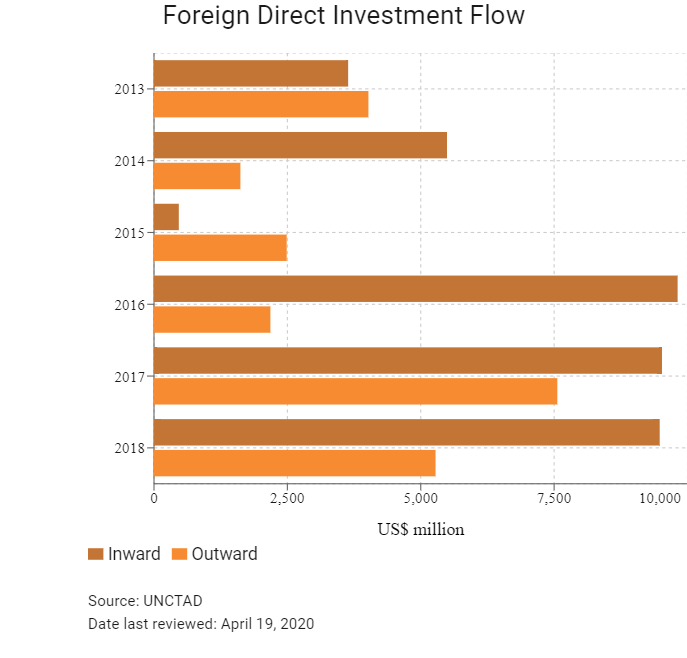 Sources: Ministry of Finance of the Czech Republic, Fitch Solutions

Citizens that are not from the EU require a work permit in order to work within the Czech Republic. EU member citizens do not require a work permit, but their employer must inform the job office about their employment. Citizens of the EEA (with EU member states, Iceland, Norway and Lichtenstein) and Switzerland do not require a visa to enter, reside and work in the country. No work permit is needed by foreigners from outside the EU if they have a permanent residence or a family reunion permit, have been granted asylum, study in the Czech Republic or have blue or green cards.

Employers must first apply for a permit to hire foreign workers. A permit is granted once no suitable candidate can be found in the Czech Republic or in other EU member states. The vacant position must be reported to the local district Labour Office and cannot be changed at a later stage to fit the profile of a potential employee. The candidate must then apply for a work permit. The government issues the permit for a maximum of 2 years, which can be repeatedly prolonged always for maximum of 2 years and may be renewed as many times as needed. The permit process takes an average of one month.

The Blue Card is intended for the stay of a highly qualified employee. A foreigner holding a Blue Card may reside in the Czech Republic and work in the job for which the Blue Card was issued or change that job under the conditions defined. High qualification means a duly completed university education or higher professional education which lasted for at least three years. The Blue Card is issued with a term of validity three months longer than the term for which the employment contract has been concluded; however, this is for a maximum period of two years. The Blue Card can be extended. One of the conditions for issuing the Blue Card is a wage criterion – the employment contract must contain gross monthly or yearly wage at least 1.5 times the gross average annual wage.

A short-term work visa can be granted by a Czech embassy upon on application for a maximum period of 90 days to be used within 180 days. The visa must be for the purpose of employment and the application must be submitted, beside general requirements, with a work permit, employment contract and proof of securing accommodation.

ECONOMIC RISK
The Czech Republic is one of the most stable economies in emerging Europe. However, it is highly exposed to the eurozone, particularly to Germany, via trade and financial links. Slowdown in the eurozone presents major headwinds to the Czech economy, disadvantaging its large export-oriented manufacturing sector. Economic growth in the Czech Republic will slow over the coming years. This slowdown comes on the back of fading external sector resilience, as ongoing weakness in Germany’s manufacturing sector will increasingly weigh on Czech export and domestic demand growth. Risks to this outlook remain titled to the downside, as negative knock on effects related to the novel Covid-19 outbreak could dent Czech growth significantly. Nonetheless, the recent uptick in fixed investment growth in the Czech Republic and relatively high spending on research and development will prevent the tight labour market and high wage growth from impeding the country's competitiveness going forward.

OPERATIONAL RISK
The Czech Republic's regionally competitive operating environment is supported by a low crime and security risk profile, a well-developed transport network, a well-educated labour force and its membership of the EU, all of which have attracted high levels of foreign investment. Key downside risks to investors are the high cost of fuel which elevates operating costs, and the tightening labour market which is adding upward pressure to labour costs. 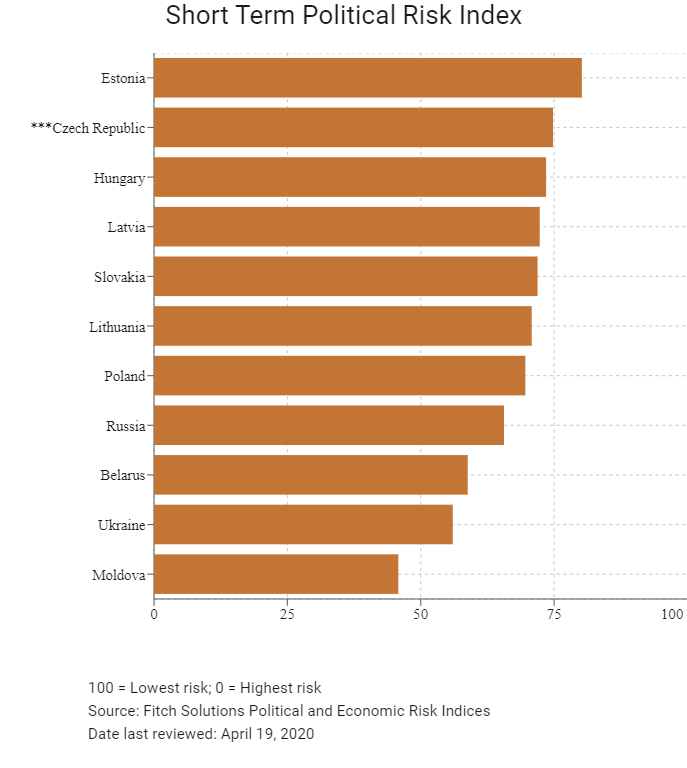 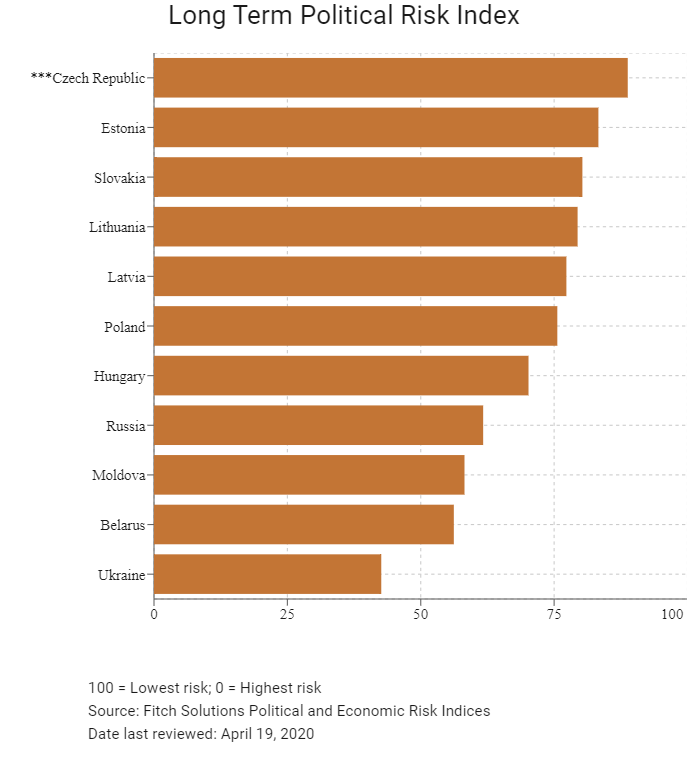 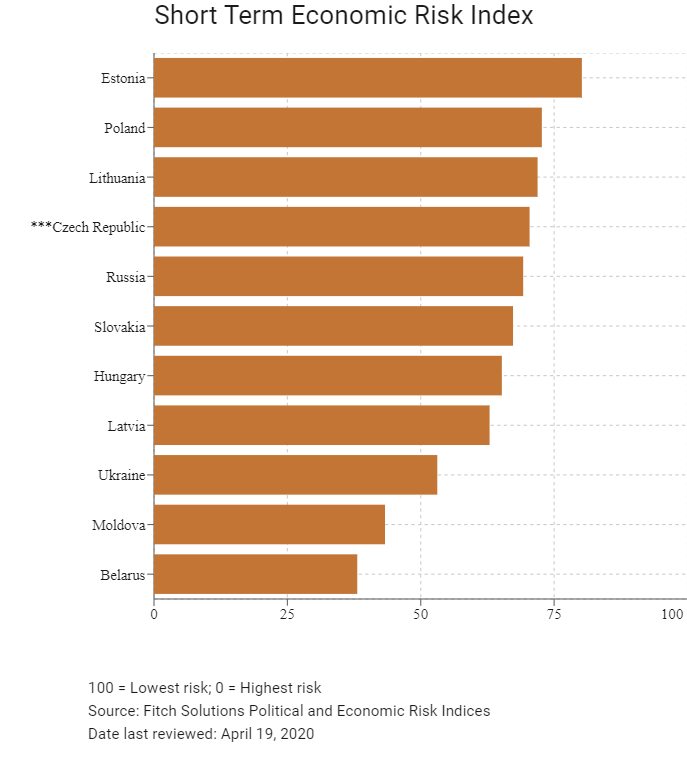 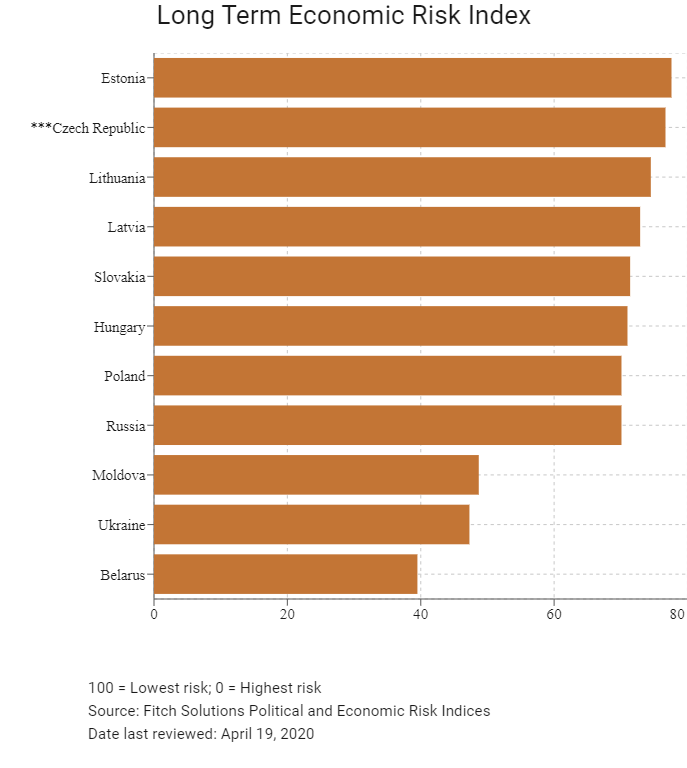 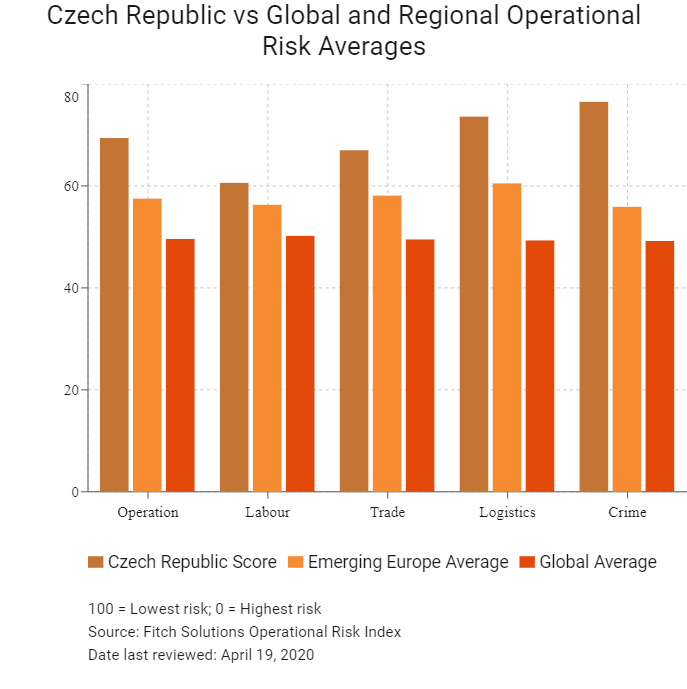 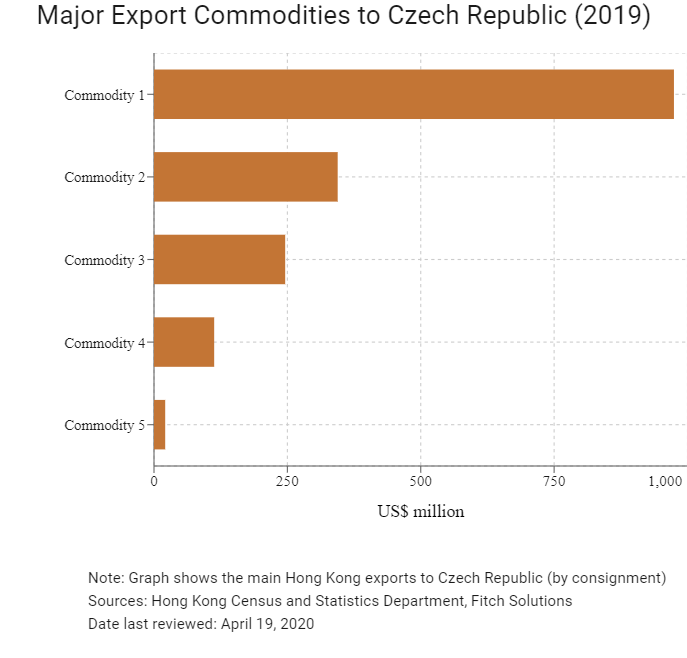 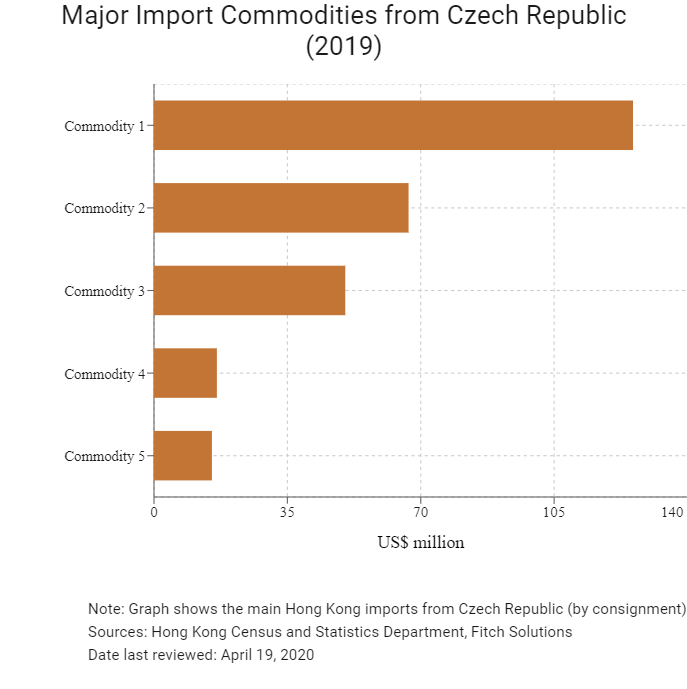 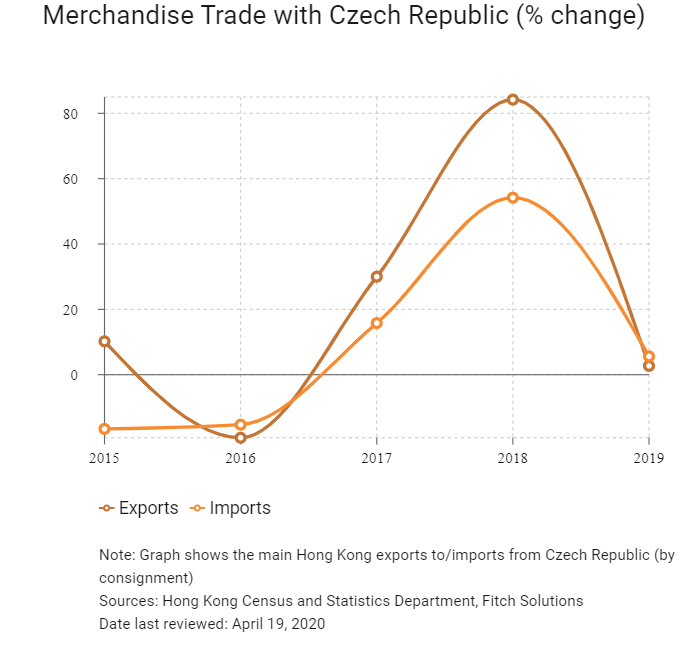 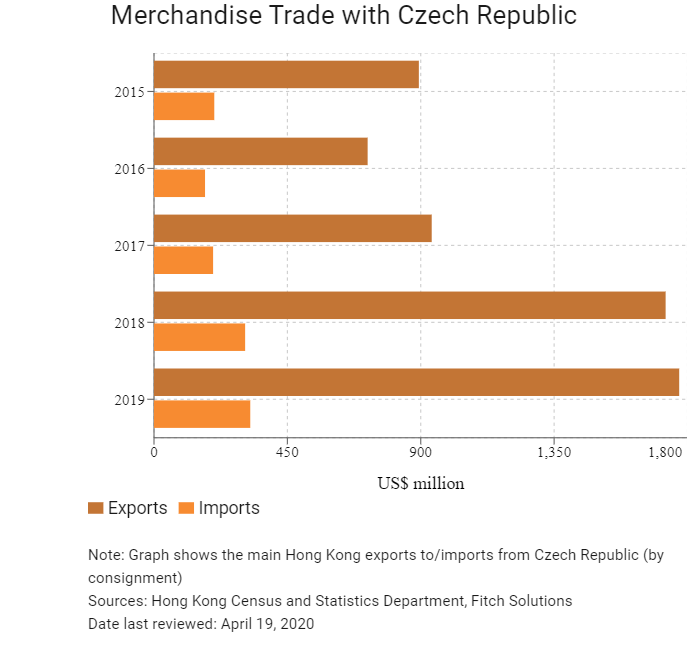 Treaties and agreements between Hong Kong and Czech Republic

The European Chamber of Commerce

HKSAR passport holders do not need a visa to the Schengen area for a stay of up to 90 days in any 180-day period. 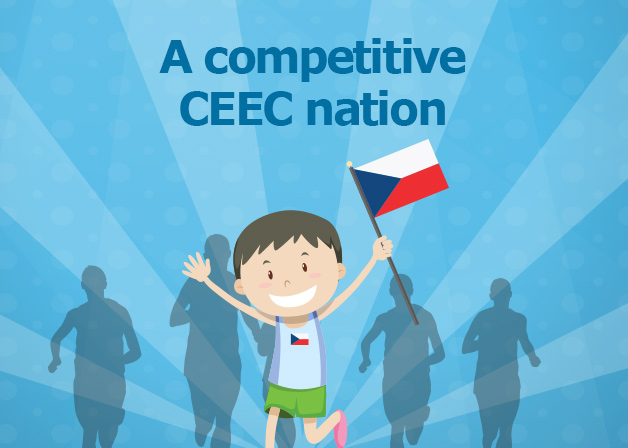 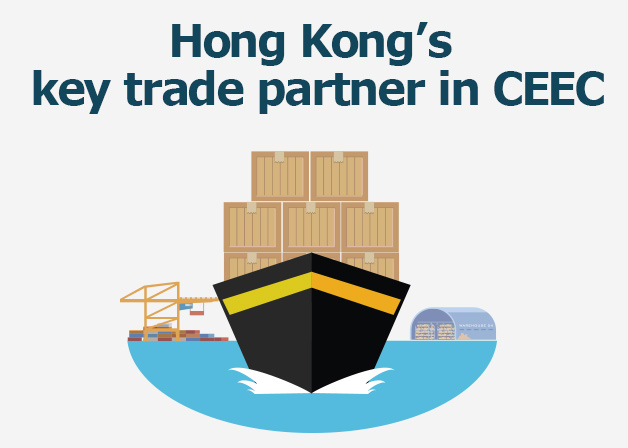