Economic growth in Belarus has been accompanied by a substantial decrease in the number of households below the poverty line and an increase in household income among the bottom 40% over the past few decades. However, the factors that enabled Belarus' past achievements are no longer in play. Limited structural reforms and a modest expansion of the private sector have weighed on Belarus' economic transition. The capacity of capital accumulation to drive economic growth is waning, energy subsidies stemming from bilateral agreements with Russia are smaller and public debt ratios to gross domestic product are rising, all against a backdrop of weakened foreign exchange reserves. A sustainable improvement in living standards will, therefore, require economic, social and institutional transformation, with an enhanced role for private enterprise – among others. While closer relations with the European Union (EU) will bode well for much-needed political reforms and greater transparency at state level, this is unlikely to significantly reduce the country's economic reliance on Russia.

December 2018
Lukashenko voiced concerns over Russia's planned introduction in 2019 of a new tax regime for oil that would potentially cost Belarus billions of dollars because of its re-exports of refined oil to the EU and the Commonwealth of Independent States.

April 2019
The Export-Import Bank of China and Belarusian Railway entered into a USD65.7 million loan agreement for the electrification of two sections of the country's rail system. The project was scheduled to be completed in 2020.

June 2019
Following protests by residents, the city of Brest's regional executive committee suspended the opening of a recently built lead-acid battery plant recently. The IPower project, a joint venture between investors from Mainland China and the United States, still needed the necessary permissions to begin operating.

July 2019
Renewable energy company RECOM Solar announced that it would build a photovoltaic (PV) module factory in the country. The factory would be based near Minsk international airport and is expected to be commissioned in late 2019.

September 2019
The newspaper Kommersant published details of a Russia-Belarus economic integration agreement said to have been signed on September 6 by the two countries' prime ministers. According to the report, there would be a partial unification of the two economies after 2021, including a single tax code.

October 2019
Serbia signed a free trade agreement (FTA) with the Eurasian Economic Union (EAEU), replacing Serbia's current trade arrangements with Belarus dating from 2008, albeit not yet confirmed at the World Trade Organization (WTO).

It was reported in Moscow that an agreement on trade and economic cooperation had come into force between the EAEU and Mainland China, all parties having ratified the document signed in May 2018. The agreement did not lower duties and was instead designed to increase the transparency of regulatory systems, simplify trade procedures and bolster economic links.

May 2020
Belarus has implemented a number of measures to curb the spread of Covid-19, such as travel restrictions and social distancing. The government has also announced a package of fiscal measures, which include additional resources for the healthcare sector and tax relief and tax deferral measures to support businesses.

August 2020
The presidential election will be held no later than the end of August 2020, with parliamentary elections due on September 10, 2020. 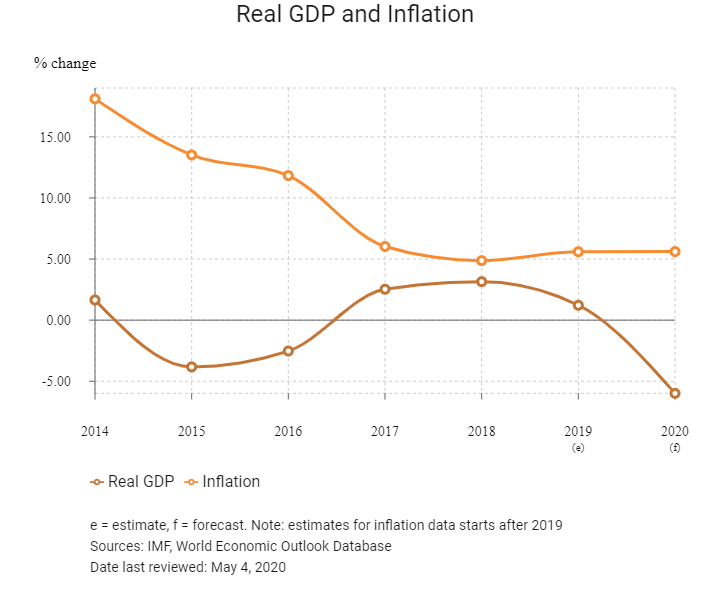 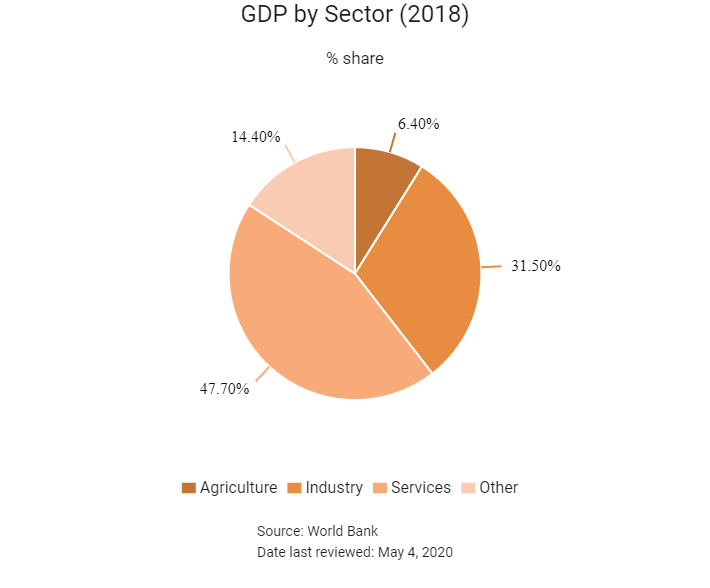 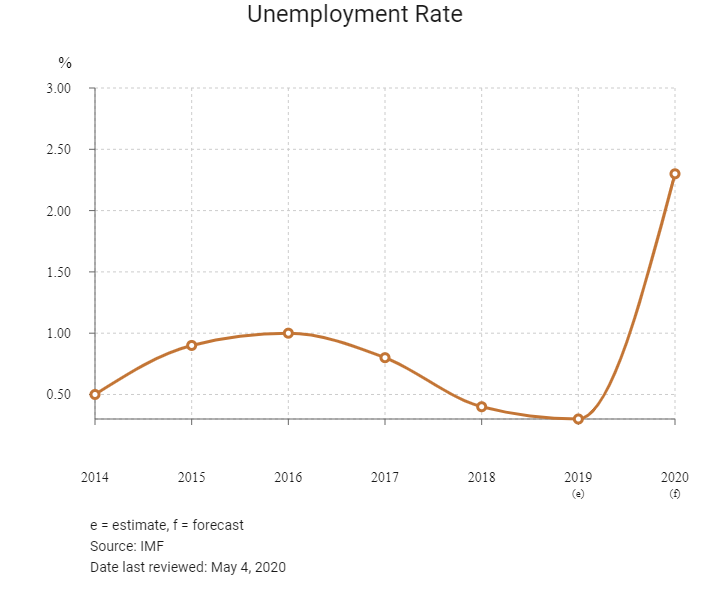 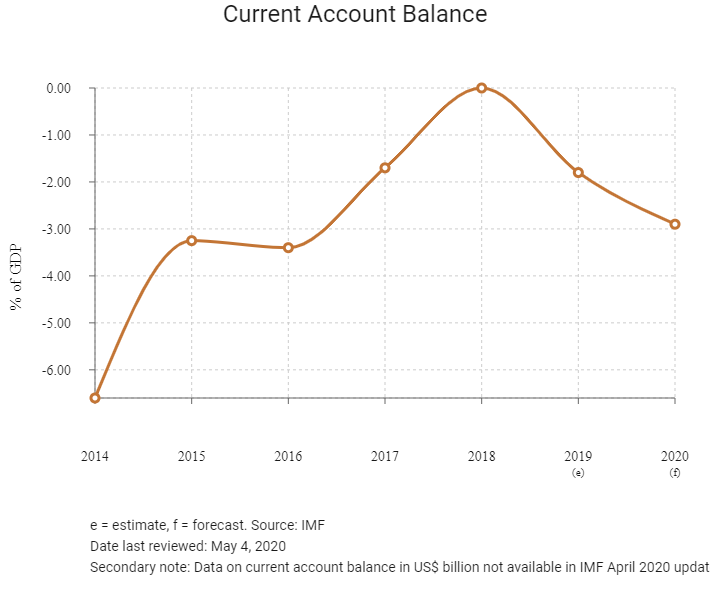 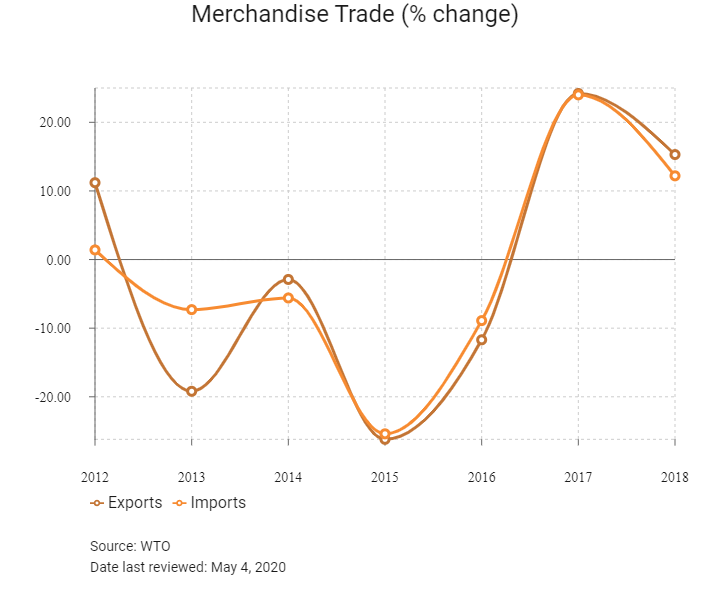 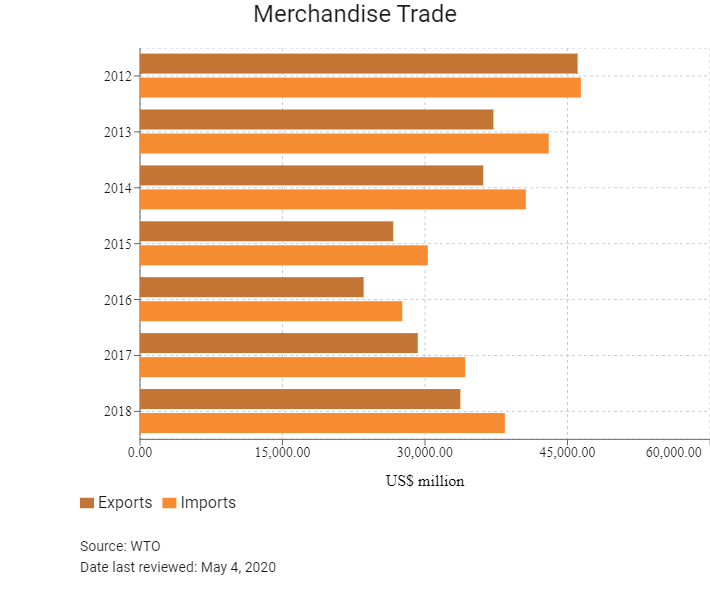 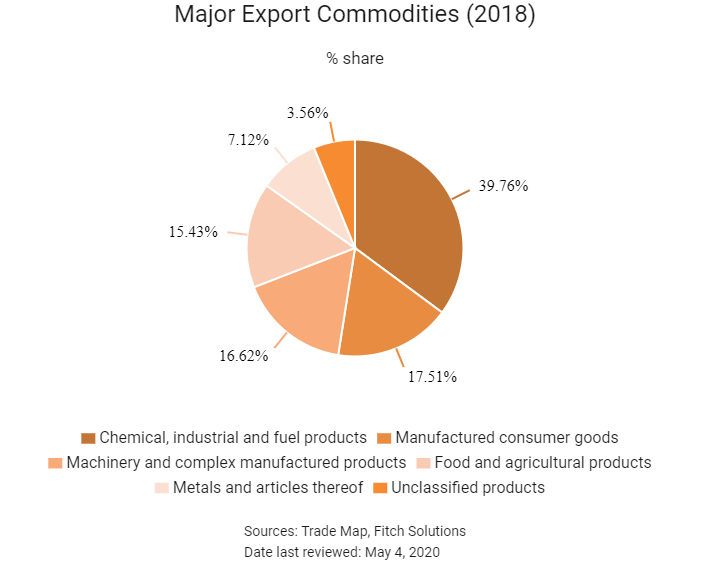 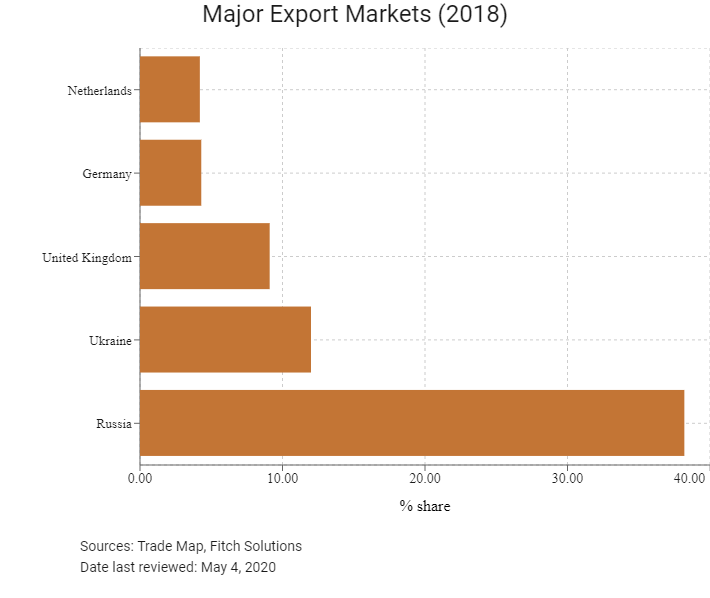 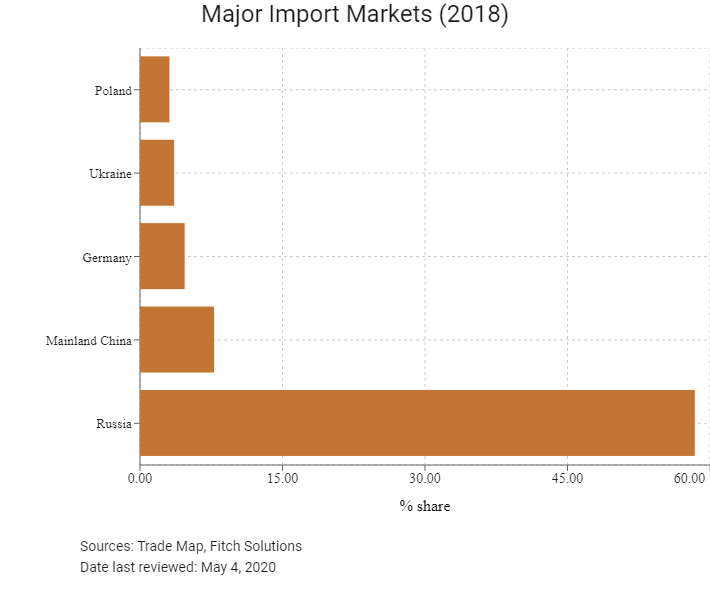 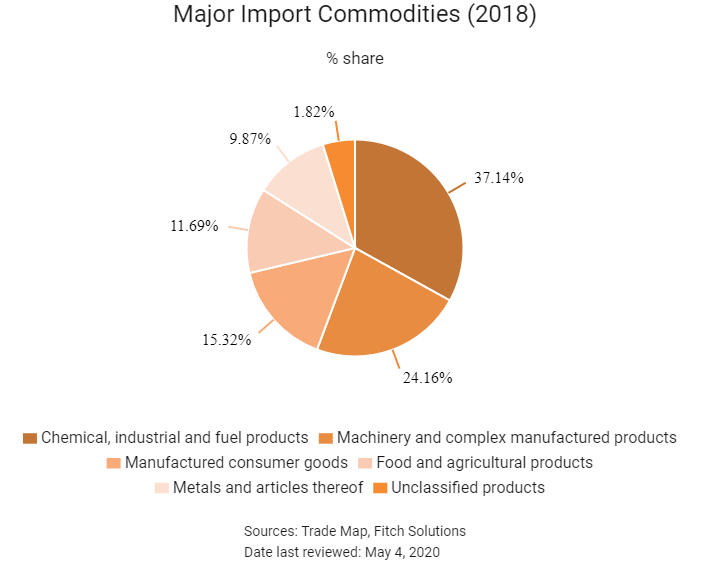 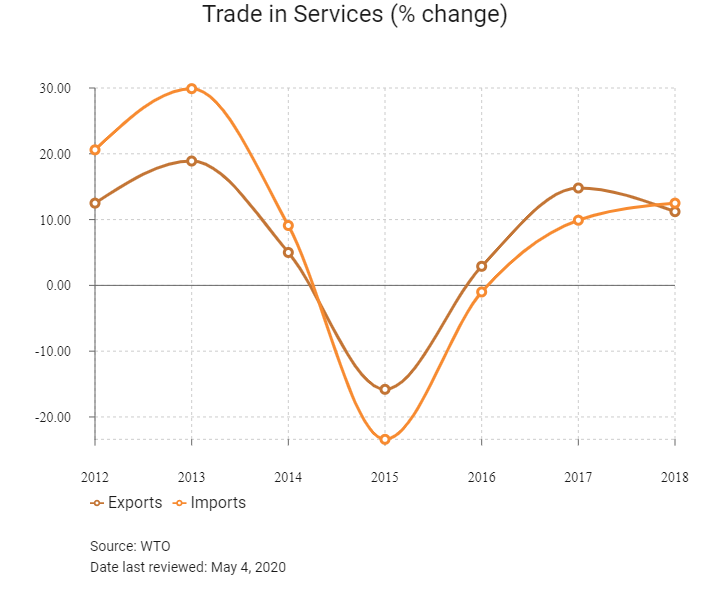 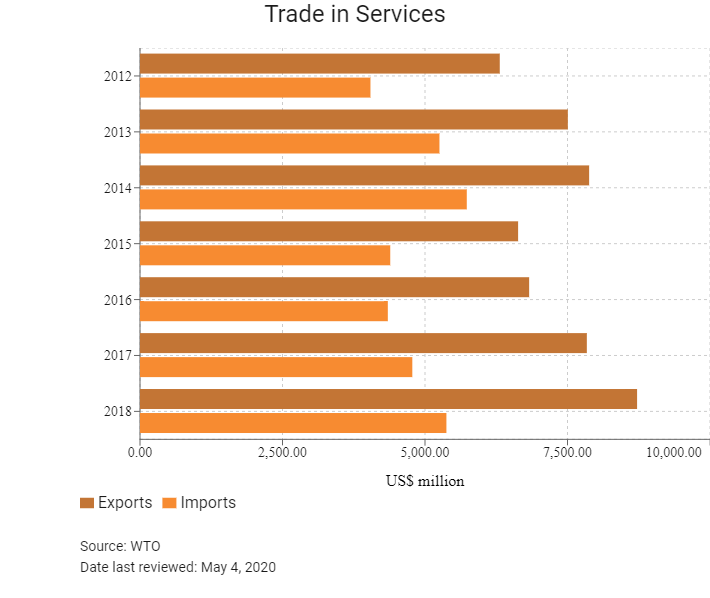 The Association of Southeast Asian Nations (ASEAN)-EAEU: ASEAN and the EAEU are negotiating to strengthen trade ties. As the ASEAN Economic Community moves closer to completion, it is likely that the EAEU's efforts to liberalise trade with ASEAN will intensify. Firms in the EAEU can take advantage of the opportunities that this presents to boost trade with the more-advanced economies in ASEAN. Companies will have the opportunity to expand into these markets and service a large consumer base. Asian fuel demand remains high and this will be of great benefit to Belarus. The two parties signed a memorandum of understanding in September 2018 on the framework for talks over the coming years. 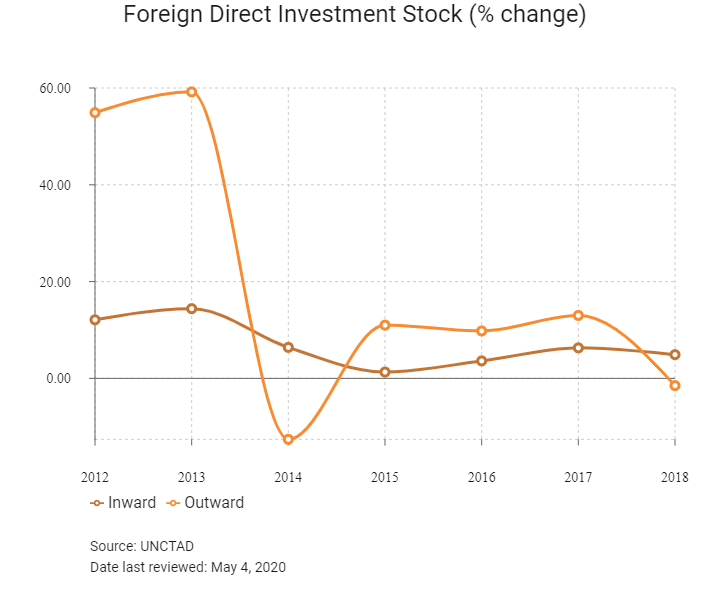 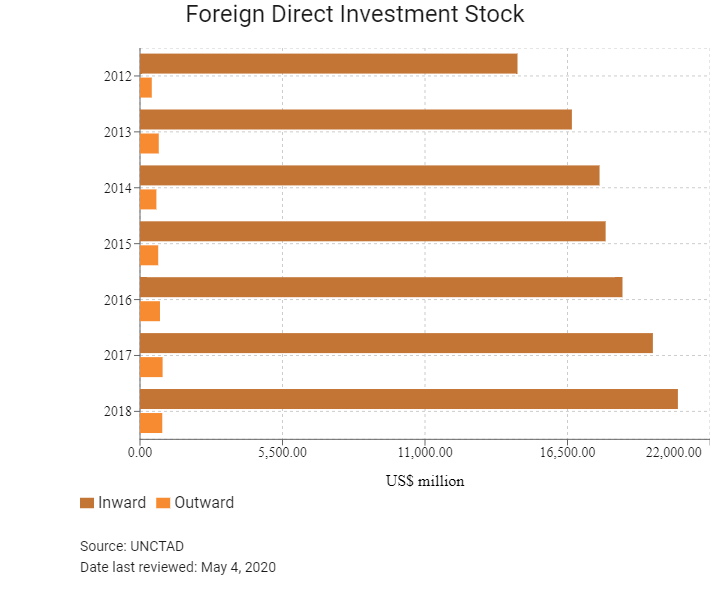 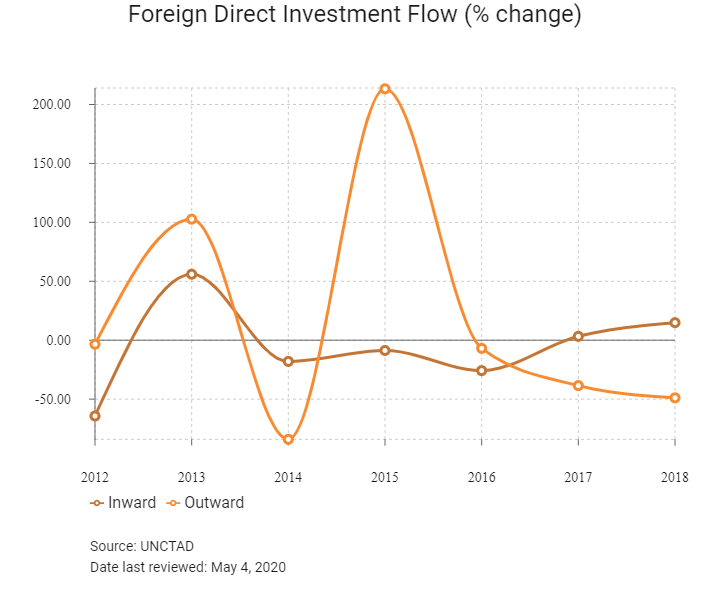 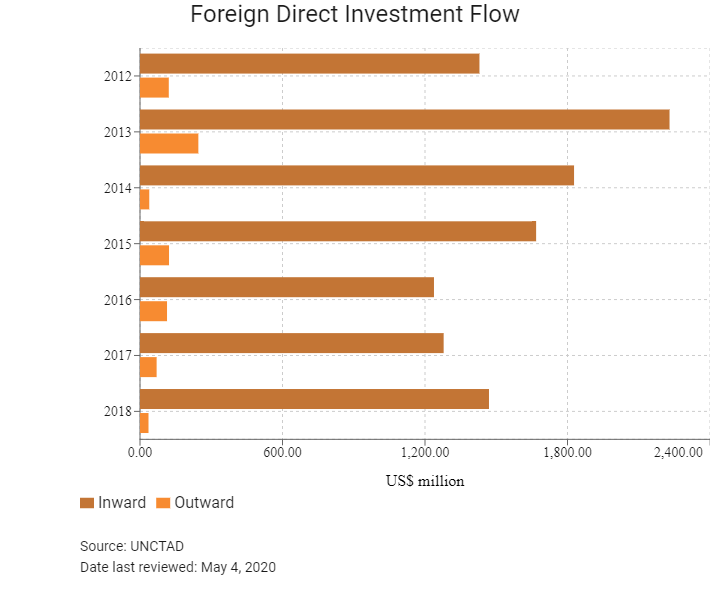 Sources: Tax and Duties Ministry of the Republic of Belarus, National Agency of Investment and Privatization, Fitch Solutions

On January 1, 2019, Belarus introduced its new Tax Code aimed at upholding state budget revenue while simplifying taxation and tax reporting in order to have a beneficial effect on business activity. Various simplification measures were introduced, including an increase in the revenue tax period from one month to one quarter for foreign companies.

Sources: Tax and Duties Ministry of the Republic of Belarus, National Agency of Investment and Privatization, Fitch Solutions

Sources: Tax and Duties Ministry of the Republic of Belarus, National Agency of Investment and Privatization, Fitch Solutions
Date last reviewed: May 4, 2020

If an employer wants to hire 10 foreign workers or more (excluding, for example, the CEO of a foreign company or highly skilled workers), they must apply for a special type of work permit from the Belarusian Ministry of Labour. The permit is valid for one year and such permits may be granted for two years for highly skilled workers. The Belarusian government does not apply any strict caps on the number of foreign workers that can be hired and does not impose any strict hiring quotas (in terms of employing Belarusian citizens) that must be met. Only Eurasian Economic Union citizens and citizens of certain members in the Commonwealth of Independent States may work in Belarus without having to obtain a work permit. Citizens of all other states require an offer of employment beforehand and there are various processes that must be completed before the work permit can be granted, which can be time consuming. The employer must first apply for a permit to be able to engage in hiring foreign workers from the Belarusian Ministry of Labour. Once this is obtained, various documents must be submitted to the Ministry of Labour for approval for the work permit to be granted.

Foreigners temporarily staying in Belarus must register with the local unit of the Ministry of Internal Affairs within five days from the date of arrival.

Visa/Travel Restrictions
A presidential decree effective from July 27, 2018, introduced visa-free travel to Belarus for citizens of 74 countries for stays of up to 30 days when entering and exiting through Minsk National Airport. Key markets include all EU member states, Australia, Brazil, Indonesia, the United States and Japan. As an important step in encouraging greater synergy between Hong Kong and Belarus, Hong Kong citizens have been allowed to visit Belarus visa-free for 14 days from February 13, 2018, onwards, after the Comprehensive Agreement for the Avoidance of Double Taxation between Hong Kong and Belarus came into force on November 30, 2017.

Sources: Ministry of Foreign Affairs of the Republic of Belarus, Fitch Solutions

ECONOMIC RISK
Belarus is heavily reliant on Russia for concessional loans and hydrocarbon exports. The state-dominated economy is the primary driver of employment and economic output, making Belarus dependent on external support in order to provide it with much-needed foreign exchange reserves. The build-up of debt at the country's state-owned enterprises and the continued misallocation of resources as a result of policy-driven lending practices will ensure that growth remains weak over the coming years. We believe that Belarusian real GDP growth will fall into negative territory in 2020 owing to an ongoing dispute with Russia over the supply of crude oil to Belarusian refineries and an uncertain global outlook due to Covid-19. The lack of meaningful structural reform, essential for long-term growth, also poses a near-term risk to economic stability. On the upside, the country benefits from a comparative advantage in relatively high-skilled areas, including heavy manufacturing, chemicals and refined fuel products, which could help to boost export growth.

OPERATIONAL RISK
Belarus’ highly educated and urbanised labour force partly improve the country’s operating environment. Businesses that operate in the city will not have difficulty in acquiring technically skilled labour. The logistics sector in Belarus will be attractive to investors as the country boasts inexpensive utilities particularly fuel and electricity. A downside to the labour market in Belarus is that, labour laws afford more protection to workers than employers, which stems from the Soviet Union era labour market system and has resulted in businesses being exposed to rigid labour regulations in Belarus. In the medium-to-long term the judicial system will remain under the influence of the president. Belarus’ continued reliance on Russia for trade and economic assistance as well as the significant role of state-owned enterprises across multiple sectors in the economy will continue to negatively weigh down on Belarus as an attractive investment destination. 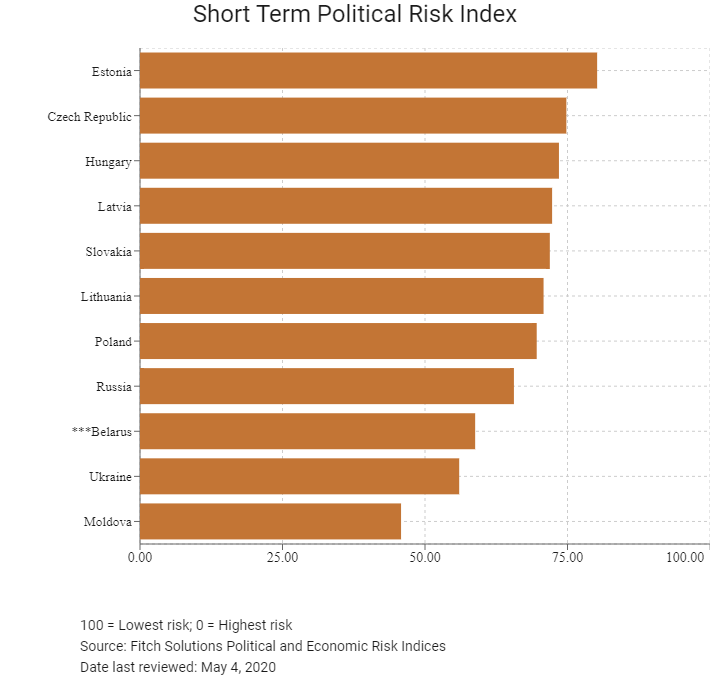 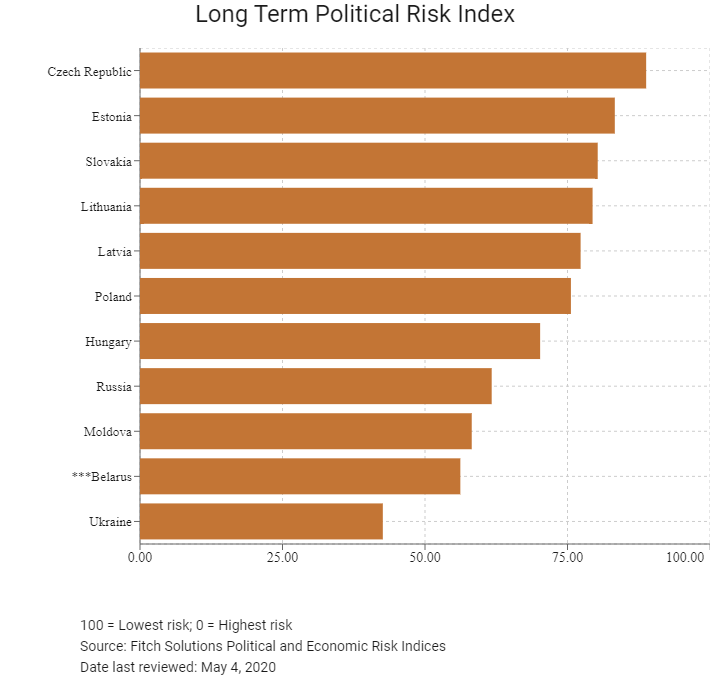 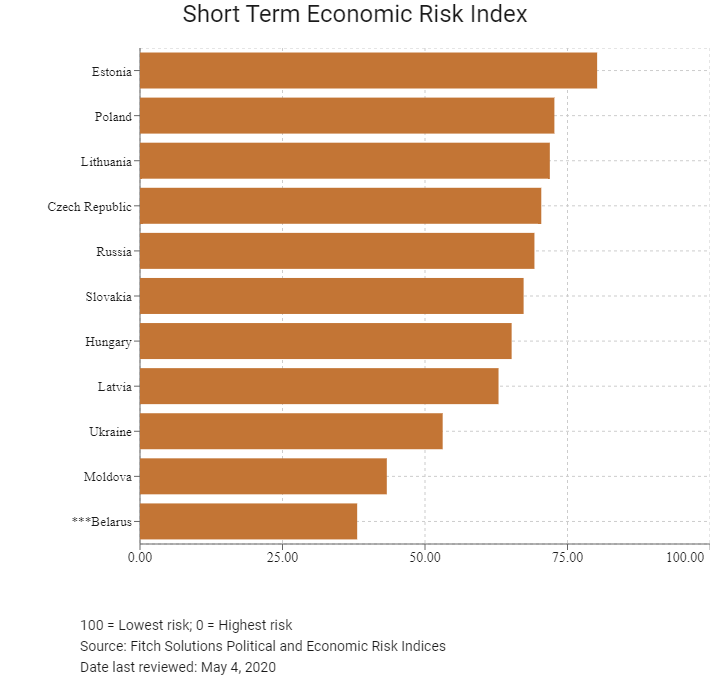 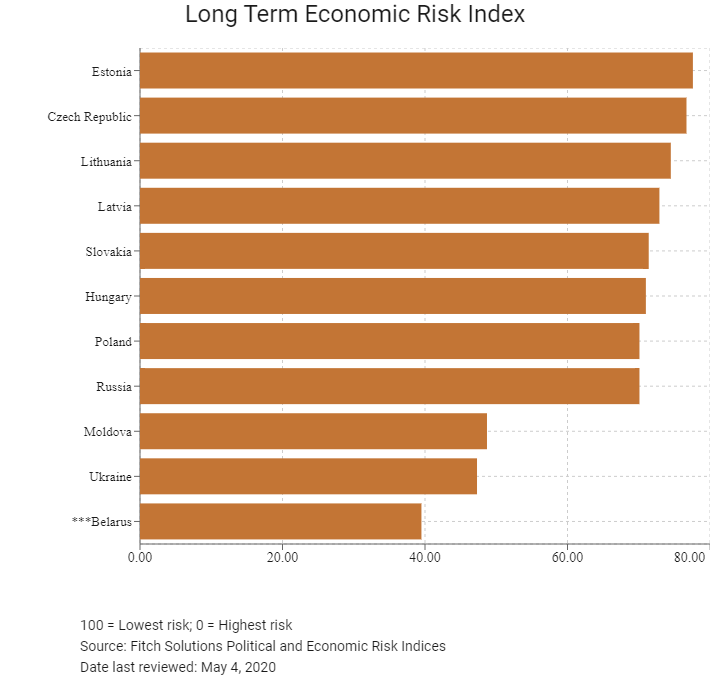 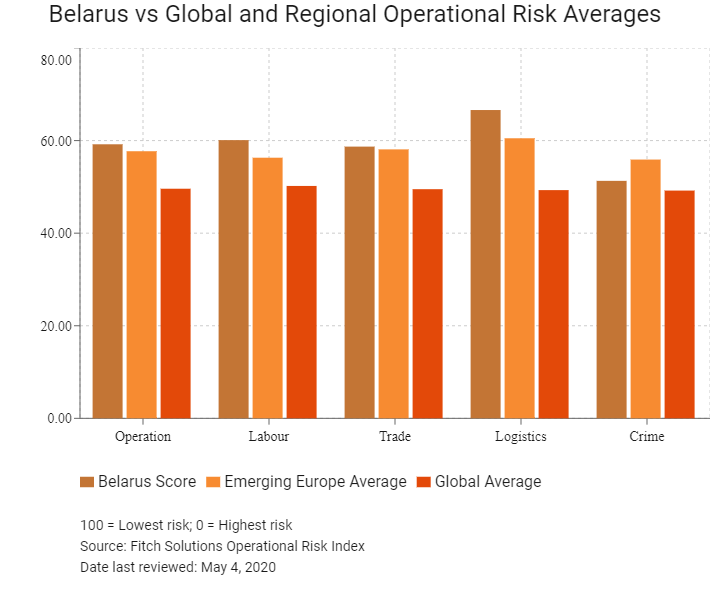 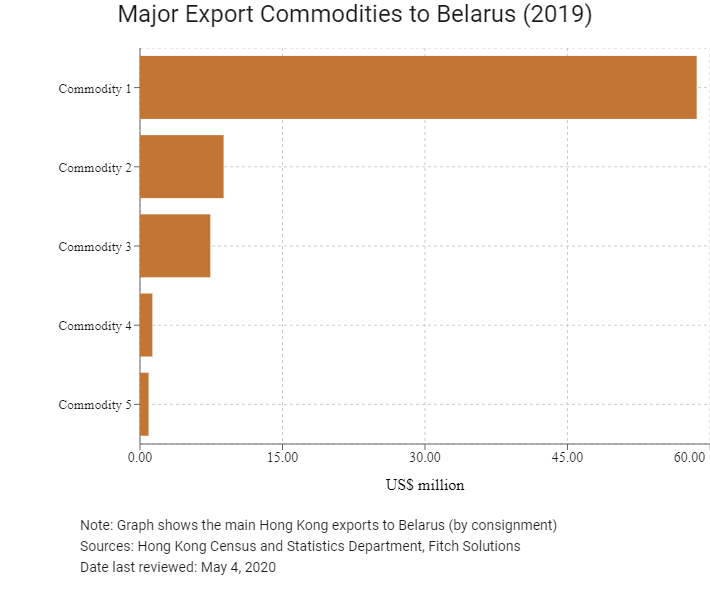 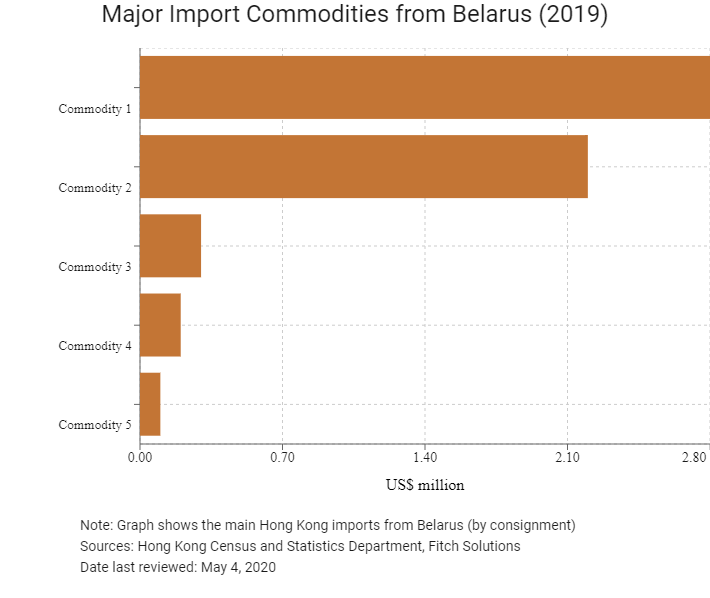 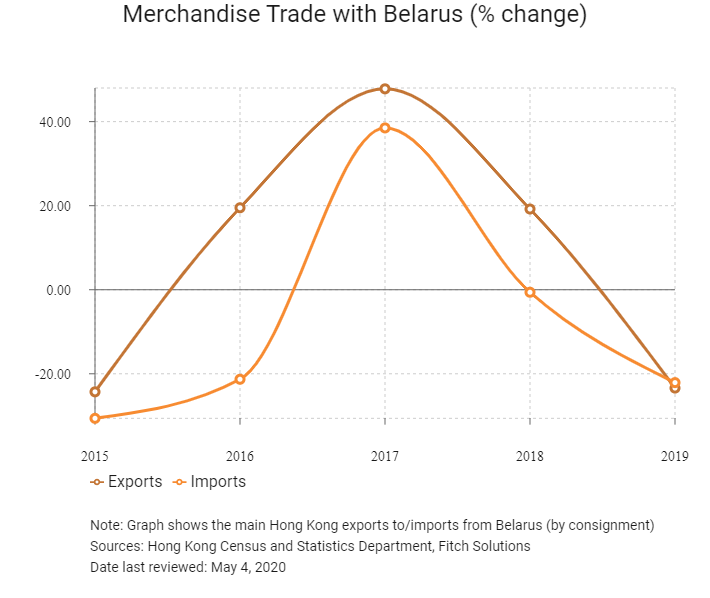 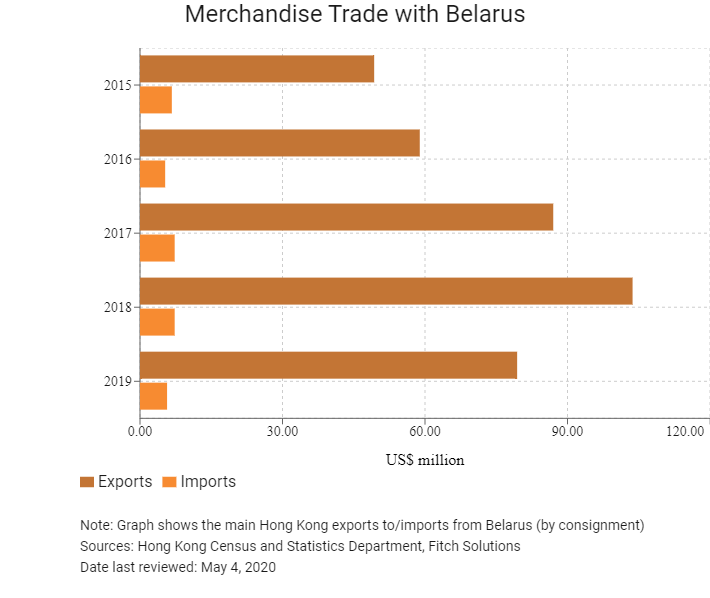 Treaties and agreements between Hong Kong, Mainland China and Belarus

The Belarusian Chamber of Commerce and Industry

The Belarusian Chamber of Commerce and Industry has been a member of the Silk Road Chamber of International Commerce since September 2016.

No visa is required for HKSAR passport holders for short stays (up to 14 days as per the January 2018 mutual agreement). However the Immigration Department of Hong Kong announced a mutual extension of visa-free period with Belarus in April 2019.

The period of mutual visa-free entry will be extended from up to 14 days to 30 days with effect from April 10, 2019. This is aimed to foster cooperation and exchanges between Hong Kong and the Belt and Road countries.

Belarus - To build a flax factory in Olsha, Belarus