Since the country's privatisation programme, started in 1993 and the liberalisation of its markets, Morocco has increasingly attracted foreign investments. Foreign investments in Morocco have expanded from the traditional domains of textiles, fishing and agriculture to those presenting greater value addition, such as automotive, energy, infrastructure, transport, telecommunications, financial services and others. Over the medium term, Morocco's economic outlook will remain broadly positive, enabled by sound fiscal and monetary policies, a diversified economy and a conducive investment environment supporting competitiveness gains. The current account deficit is set for a pronounced widening in 2020 on the back of deteriorating global economic conditions leading to a drop in goods exports, tourist arrivals and remittance inflows. The government will likely continue to implement deep and comprehensive reforms to boost job creation and skills development.

November 2018
Africa's fastest train started operating in Morocco, halving the time it takes to travel between Casablanca and Tangier. It took seven years and USD2.4 billion – funded by the governments of Morocco, France, Saudi Arabia, Kuwait and the United Arab Emirates - to build the high-speed railway line.

June 2019
French automotive manufacturer PSA Group inaugurated the new USD630 million Kentira plant in Morocco in June 2019. The plant aims to produce 200,000 vehicles by 2020. Approximately 90% of production will be destined for export markets.

August 2019
BMCE Bank of Africa agreed to co-finance the Cité Mohammed VI Tangier Tech project, which is coming up outside the Moroccan city of Tangier. The bank will help develop the nearly USD 11 billion project in collaboration with China Communications Construction Company and its subsidiary China Road and Bridge Corporation. Tangier Tech Development Company signed a memorandum of understanding with the two Chinese firms for the project in April. The tech city will have an area of more than 20sq km and will be connected to railway and motorway networks. It will house 300,000 people. The first development phase of the project has already been completed and industrial investors are likely to receive the first plots later in 2019. The project is part of Morocco's strategy to boost cooperation with Mainland China and to improve business development in the country. The project, launched in 2017, is due to be completed in 10 years. In addition, phase one of the Zenata ecological city in Morocco is reportedly expected to be completed by 2020.

October 2019
A cabinet reshuffle reduced the number of ministers to 24 from 38 previously.

November 2019
The Moroccan agency for Sustainable Energy and the National Office of Electricity and Drinking Water have signed a contract with a consortium comprising Nareva Holding and Enel Green Power for the construction of a MAD4 billion (USD414.8 million) wind farm in Boujdour province, Morocco. The wind farm will have an installed capacity of 300MW. Construction on the plant is expected to start in 2021. The scheme is part of the 850MW integrated wind energy project, which has a budget of more than USD1.2 billion. Other wind farms under the project are the 180MW Midelt, the 200MW Jbel Lahdid in Essaouira, the 100MW Tiskrad in Tarfaya and the 70MW Tangier II.

May 2020
In light of the Covid-19 pandemic, the authorities declared a state of health emergency, adopted containment measures, including quarantine; suspended all international passenger flights; forbade all public gatherings; and closed mosques, schools, universities, restaurants, cafes and hammams. The authorities have created a special fund dedicated to the management of the pandemic, of about 2.7% of GDP.

2020
Morocco’s expansionary 2020 budget will, to some extent, help boost social welfare. Reports on the 2020 budget indicate a substantial planned increase in government spending, with a focus on boosting households’ welfare. For instance, the authorities envision a MAD6 billion increase in the public sector wage bill – a move consistent with the MAD300-500 raise in monthly public sector wages agreed upon earlier in 2019. The budget also intends to create 20,000 jobs just in the healthcare, education and scientific research sectors while also expanding the health insurance system to cover students. The expansionary nature of budget and the focus on tackling social inequalities and improving living standards.

2021
Legislative elections are scheduled for 2021. 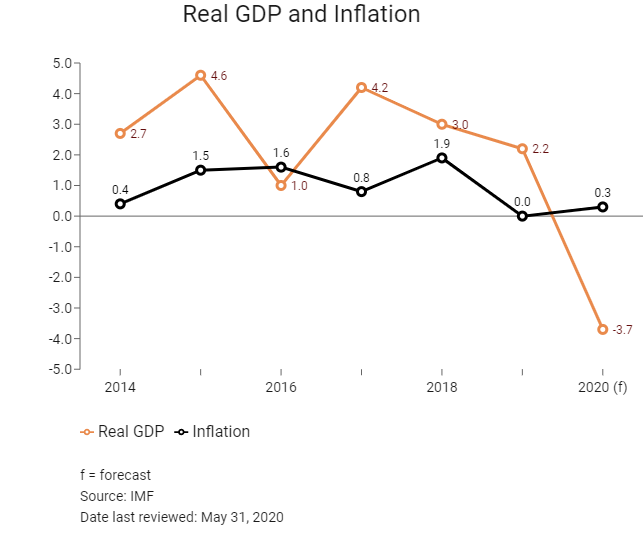 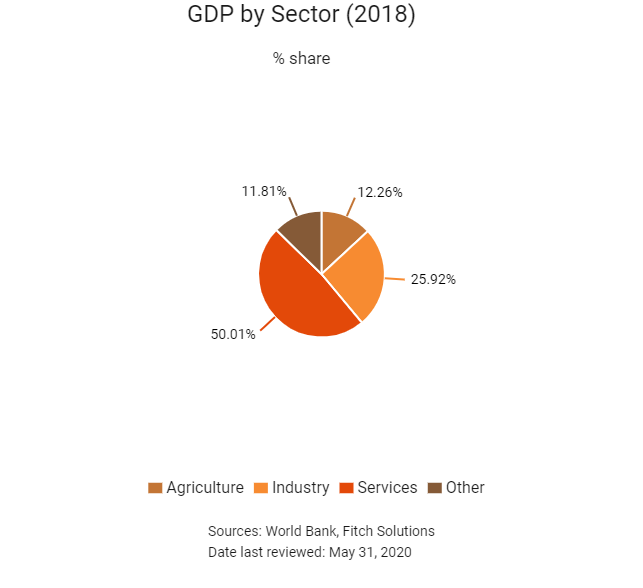 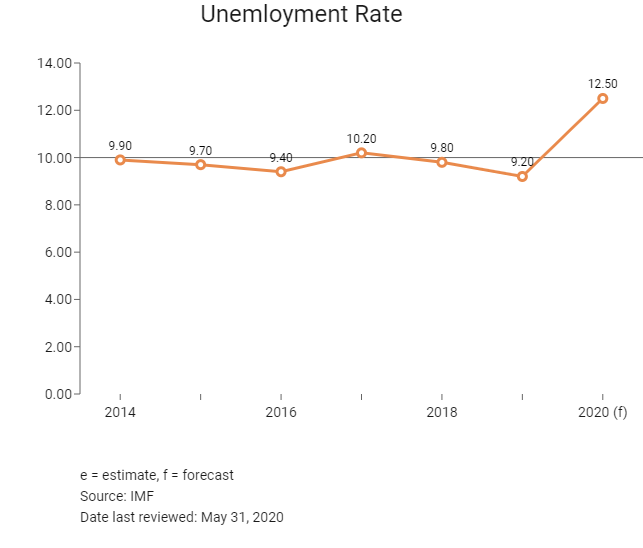 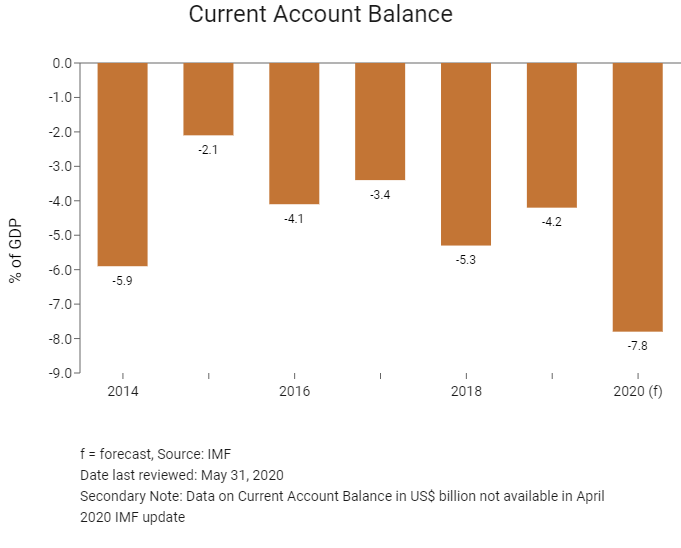 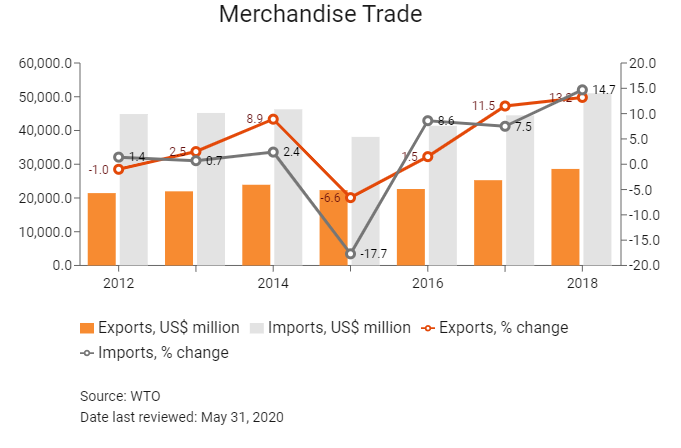 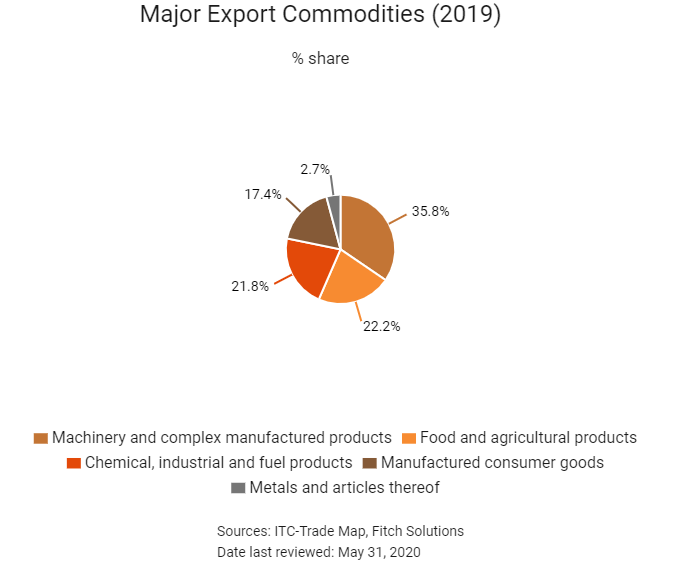 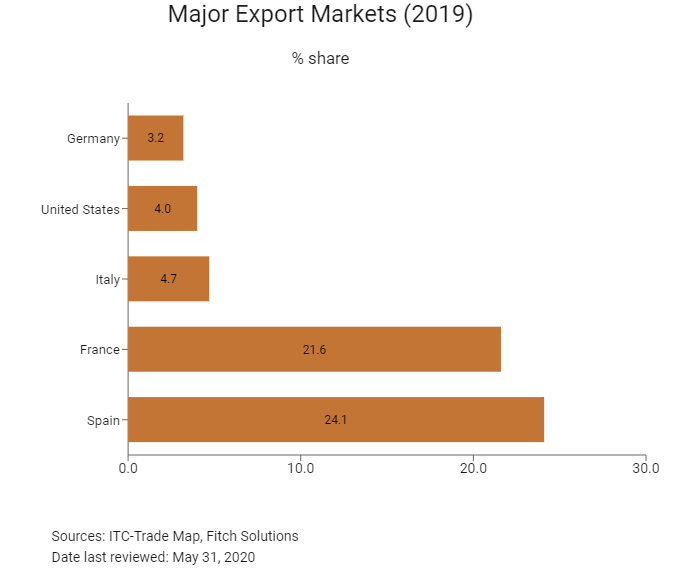 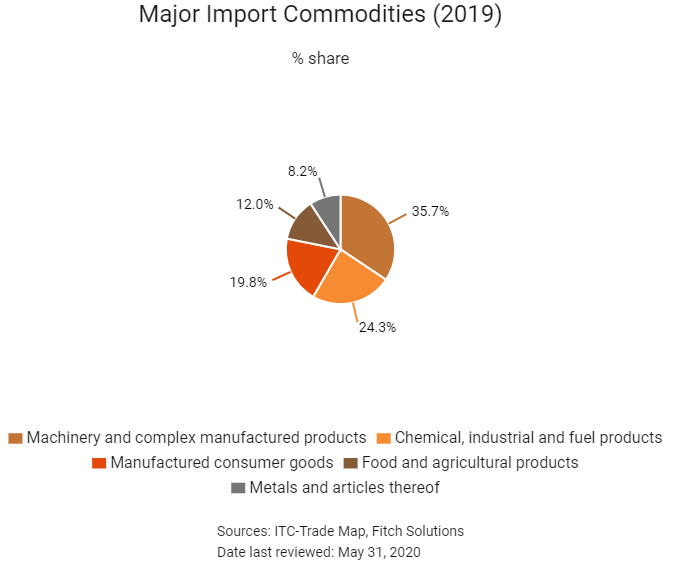 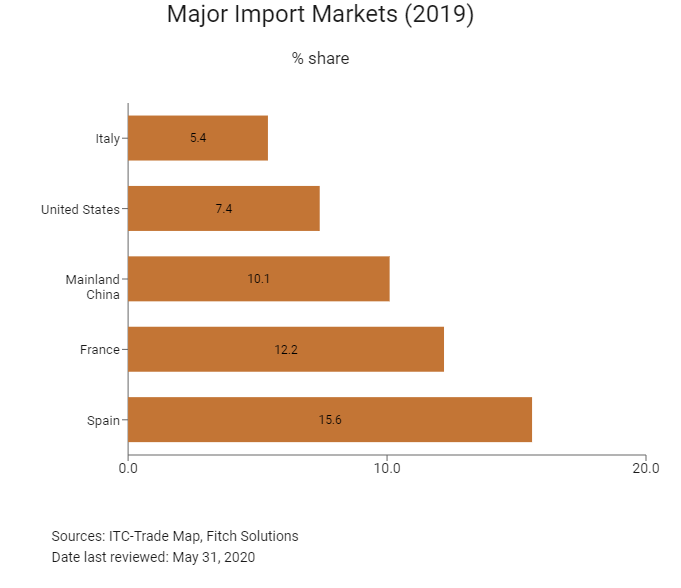 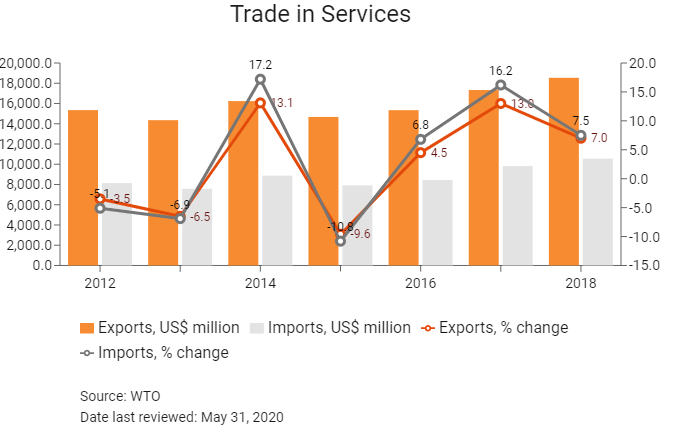 Morocco re-joined the African Union in January 2017. Its application in June 2017 to join the Economic Community of West African States has also been accepted. Morocco's improving diplomatic relations with a number of Sub-Saharan African states will help diversify its mix of trade partners in the medium-to-long term. 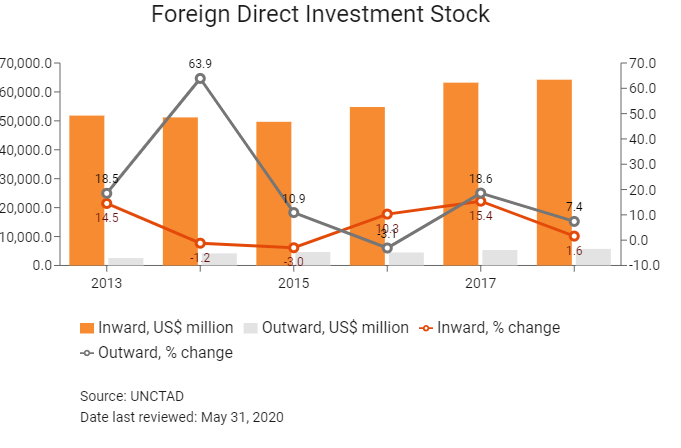 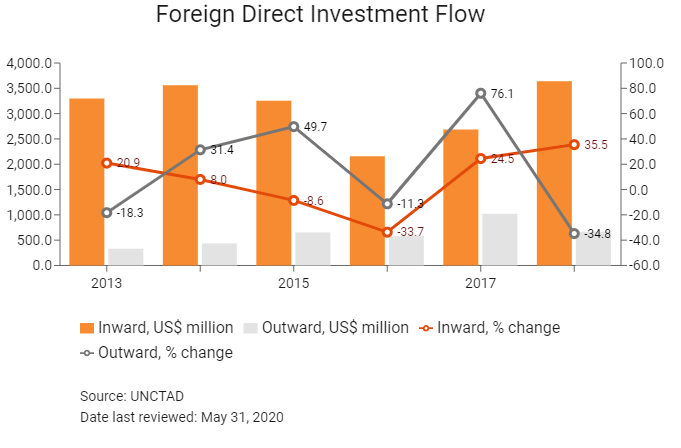 Sources: US Department of Commerce, Invest in Morocco, Fitch Solutions

Companies wishing to employ foreign workers in Morocco for more skilled positions must apply for work permits (attestation de travail) from the National Agency for the Promotion and Employment of Skills (Agence Nationale de Promotion de l'Emploi et des Compétences). Required documents to obtain a permit are relatively standard: an employment contract, copies of degrees and copies of passport and application forms. The process is free, but can take several weeks and Moroccan bureaucracy can be complicated to navigate for foreigners.

Citizens from 68 countries (including many European and Middle East and North Africa countries, but not Algeria) do not need visas for stays up to 90 days. Foreigners from countries that require a visa to enter Morocco as visitors must apply in person at the Moroccan consular post where they currently reside. Business visas for 90-day stays cost USD27 for one entry and USD40 for two entries.

ECONOMIC RISK
High trade exposure to the eurozone market poses a medium-term risk to Morocco's growth in the event of a significant drawdown in demand. Approximately two-thirds of the country's goods exports are absorbed by its northern neighbours. As a consequence, the export sector is highly vulnerable to any economic downturn in the eurozone, particularly in light of global trade tensions. The tourism industry also relies extensively on visitors from France, Spain, the Benelux countries and the UK, and any downturn in the security situation would harm growth. Over the long term, the economy will benefit from greater exposure to emerging markets in the Middle East and North Africa and in Sub-Saharan Africa. Weather-induced volatility in agricultural output will continue to constitute a risk to real GDP growth, given that the sector employs over a third of the workforce. Real GDP is expecting to contract on the back of Covid-19-related disruptions to economic activity and the incoming drought in the agricultural sector. Regional political tensions and weak activity in the eurozone pose the main downside risks to the outlook.

OPERATIONAL RISK
Morocco offers a number of strategic advantages across its operational risk profile which make it a more attractive location for investment than many of its regional peers. In particular, relatively high levels of security, an integrated supply chain network, openness to foreign investment and well developed financial markets contribute to an environment conducive to business. However, key risks are present in the country's labour market, including low levels of educational attainment, which dampen the competitiveness of the workforce. As a result, businesses may face elevated labour costs and limited availability of skilled workers. Morocco also has one of the highest income and personal tax rates in the Middle East and North African region, representing a notable drawback to the country's appeal for businesses. The newly expanded port of Tanger-Med is a global transhipment hub, and consequently export and import supply chains benefit from strong connections to international trade routes. Furthermore, the country is making great strides in terms of e-government readiness, improving the ease with which businesses can complete administrative procedures. 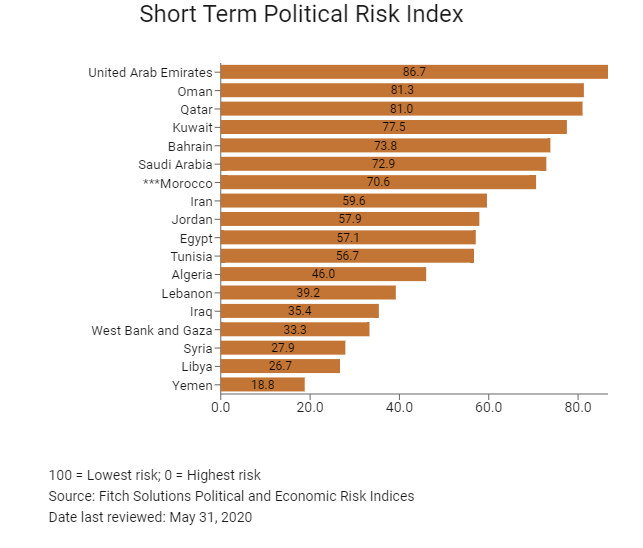 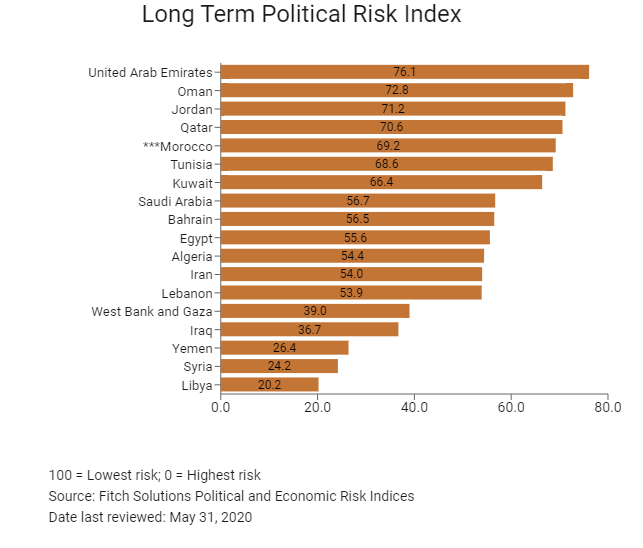 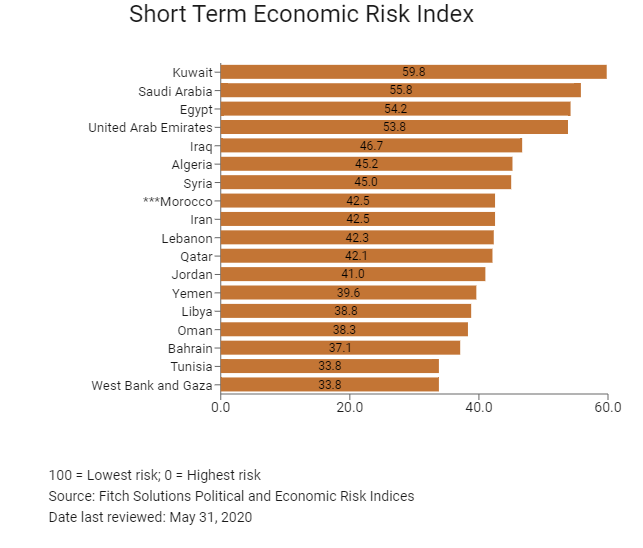 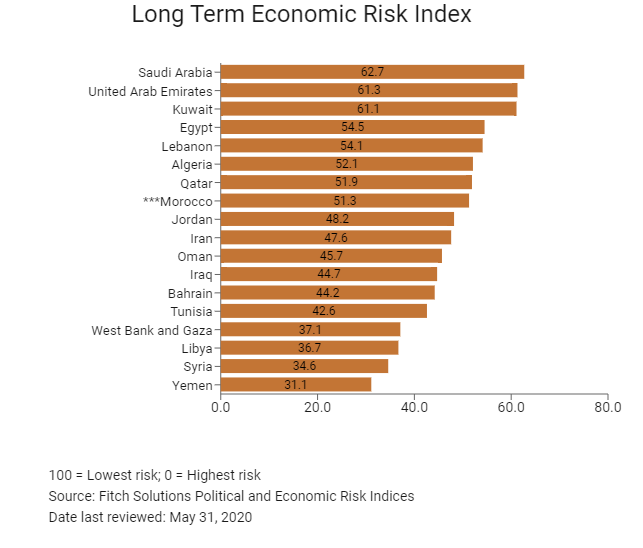 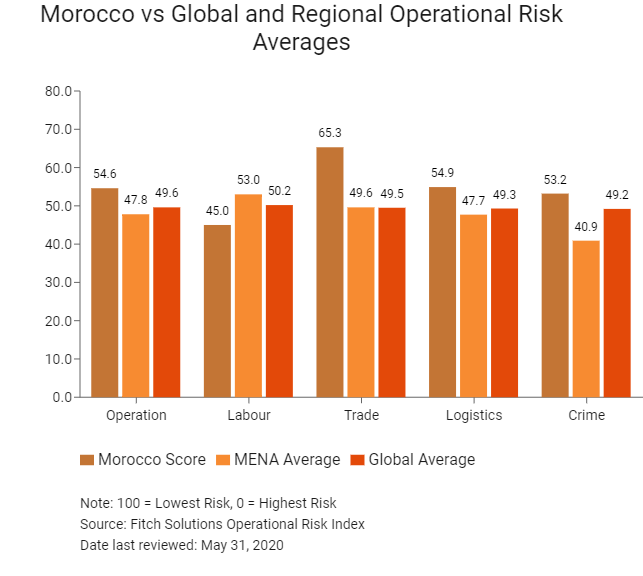 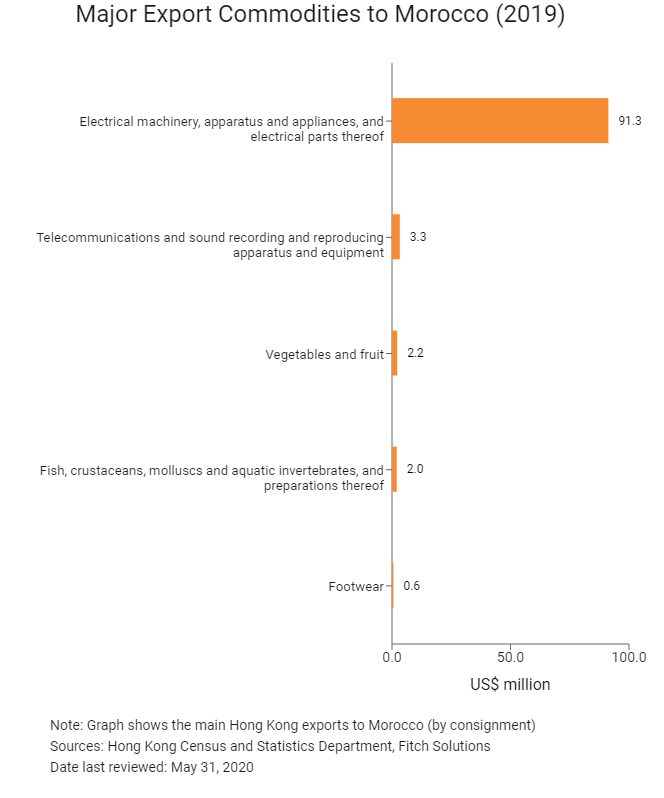 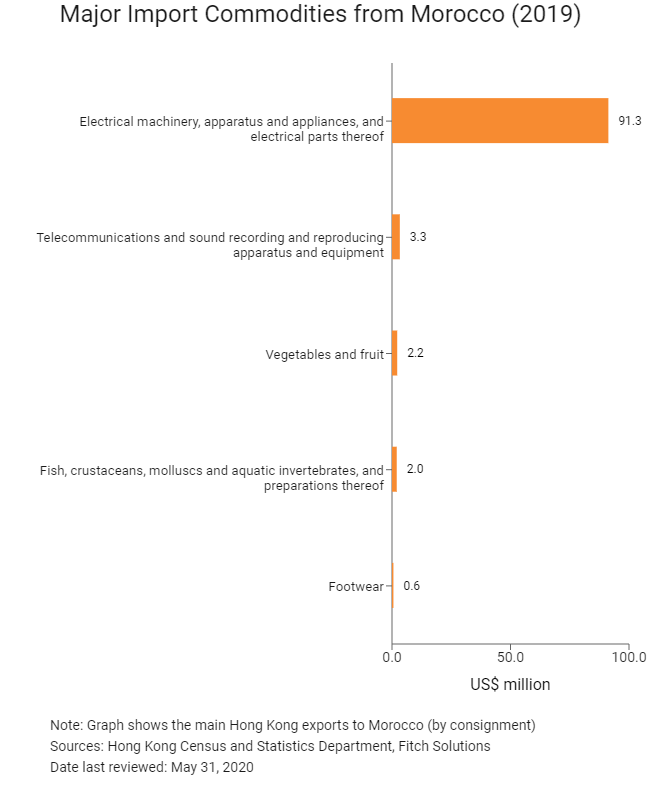 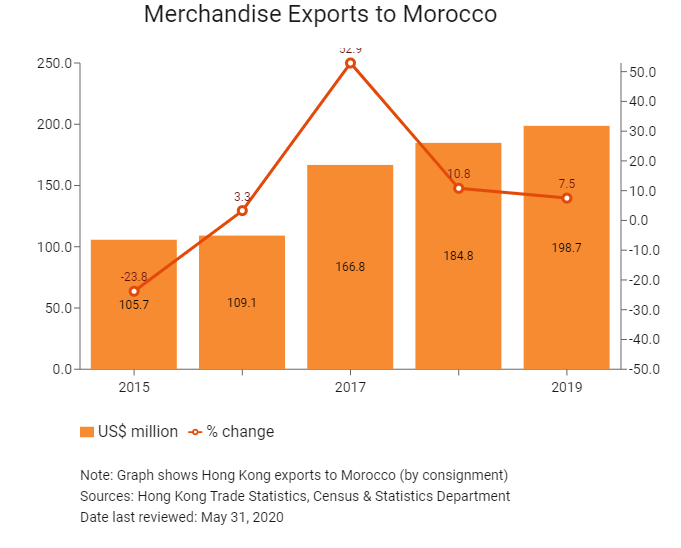 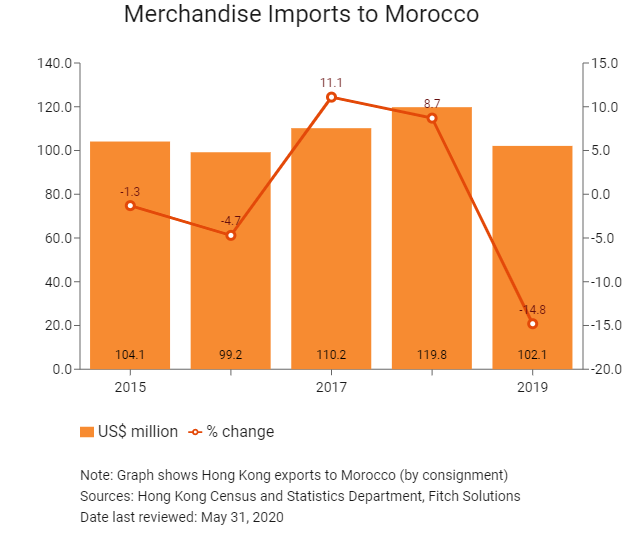 Treaties and Agreements between Hong Kong and Morocco

1. Morocco and Mainland China have a bilateral investment treaty which came into force in November 1999.

2. Morocco and Mainland China signed a Double Taxation Avoidance agreement which entered into force in August 2006.

The Arab Chamber of Commerce & Industry (ARABCCI) was established in Hong Kong in 2006 as a leading organisation at promoting commercial tied between Hong Kong/mainland China and the Arab World.