Over the past 25 years, Mongolia has transformed into a vibrant democracy, tripling its GDP per capita since 1991. With vast agricultural and mineral resources and an increasingly educated population, Mongolia’s long-term development prospects are promising. Since its transition to a free market economy, the country has pursued an open trade regime that remains largely dependent on the exports of its mining sector. Although the government has tried to promote the development of other key exports, notably machinery and textiles, the country's economic diversification process has been somewhat slow to unravel. Mongolia is geographically landlocked between Mainland China and Russia, which not only limits its international connectivity for exports, but also makes it overly reliant on Mainland China and Russia for imports of crucial products - such as manufactured goods and energy. This raises the risk for Mongolia from external shocks such as a sustained rise in oil prices or a slowdown in Mainland China.

September 2018
Mongolia's government extended a ban on migration from rural areas to Ulaanbaatar, introduced in 2017, until 2020 to try to reduce high levels of air pollution in the capital city. Officials were trying to design a programme to encourage migration back to the provinces.

December 2018
Mining company Rio Tinto signed a deal with Mongolia for the supply of power to Rio Tinto's giant copper mine extension at Oyu Tolgoi by 2023. Construction of a 300MW plant close to the Tavan Tolgoi coalfields will start in 2020.

March 2019
Representatives from Mainland China, South Korea, North Korea, Russia and Japan attended a strategy meeting, the North East Asia Regional Power System Interconnection, which was co-organised by the Mongolian Ministry of Energy and the Asian Development Bank. Mongolia has enough renewable energy potential to become an important supplier of energy to the regional market, where demand for energy is expected nearly to double by 2040.

October 2019
ADB, International Finance Corporation and the Municipality of Ulaanbaatar City in Mongolia have signed a memorandum of understanding for the construction of 10,000 energy efficient houses under the Ulaanbaatar Green Affordable Housing and Resilient Urban Renewal Sector Project. The houses, to be built in 20 new environmentally friendly districts, include 1,500 units for social housing, 5,500 for affordable housing and remaining to be sold at market rate. The USD570.2 million project will be financed using grants and some funding from private lenders.

October 2019
The government of Mongolia signed loan agreements worth USD103 million with the ADB for three projects in the country. Financing worth USD60 million will be used for the Regional Road Development and Maintenance Project, which includes revamp of the 118km Darkhan-Altanbulag and 58km Khuiten Valley-Arvaikheer road sections. Work will also be carried out on the 204km Ulaanbaatar-Darkhan section. USD27 million will go towards the Regional Improvement of Border Services Project, which is currently under way. The scheme will modernise border-crossing points in Bichigt and Borshoo, which border China and Russia, respectively. The remaining loan amount will support the ongoing Fourth Health Sector Development Project. The scheme includes construction of Songinokhairkhan district hospital, which is likely to be completed in December, according to a press release from the ADB.

May 2020
The ADB has approved a USD100 million loan to the Government of Mongolia to mitigate the severe health and economic impacts of the Covid-19 pandemic.

May 2020
Minister of Finance Ch.Khurelbaatar and Ambassador of South Korea to Mongolia Lee Yeo-hong signed an exchange of letters on the extension of the General Agreement between the Governments of Mongolia and the Republic of Korea on loan from the Economic Development Cooperation Fund  until the end of 2020. Under the general agreement that was established on January 16, 2018, the Mongolian government is receiving a soft loan of KRW equalling to USD700 million that has an annual interest of 0.2% and 30 years of repayment term with a 10-year grace period.

May 2020
The European Commission was considering to create a new authority to police financial crime and monitor banks more strictly. In an action plan sent to the EU’s 27 governments, the Commission, the EU executive, said the Union needed a system to tackle money laundering and financial crime with an EU-level supervisor. The Commission also published a new list of countries where it says more needs to be done to curb money-laundering. The revised list is set to take effect from October 2020. Companies in any of the listed states are banned from receiving new EU funding. The Commission added the Bahamas, Barbados, Botswana, Cambodia, Ghana, Jamaica, Mauritius, Mongolia, Myanmar, Nicaragua, Panama and Zimbabwe. 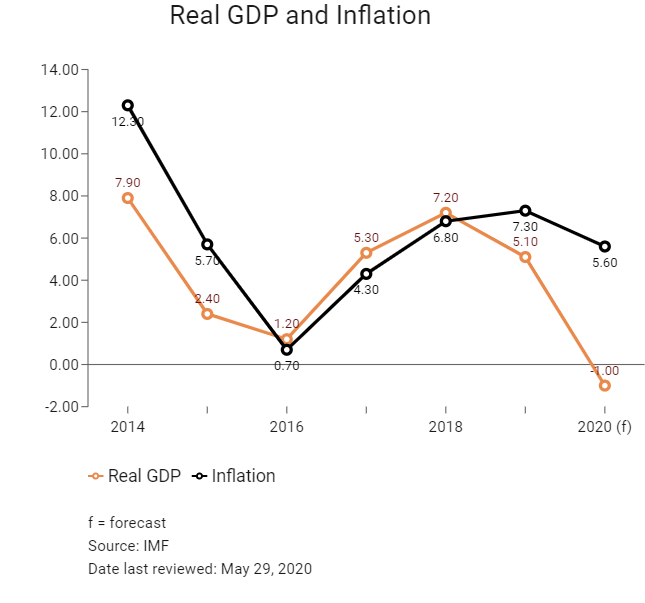 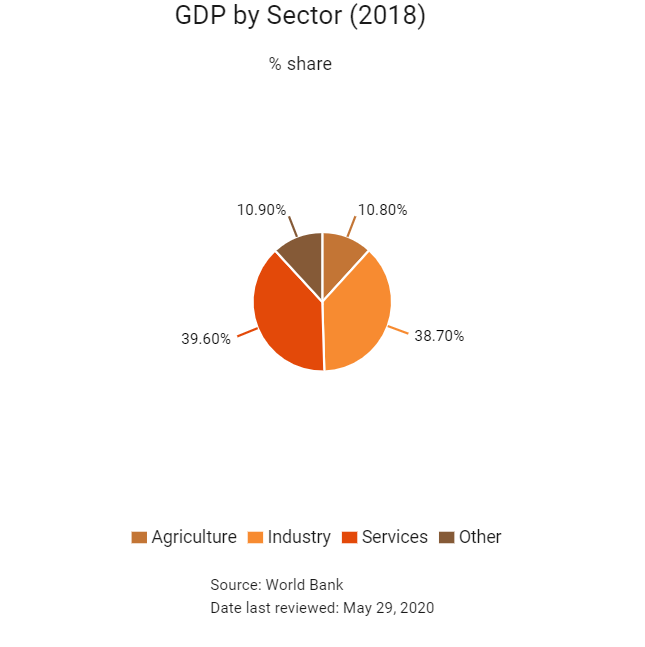 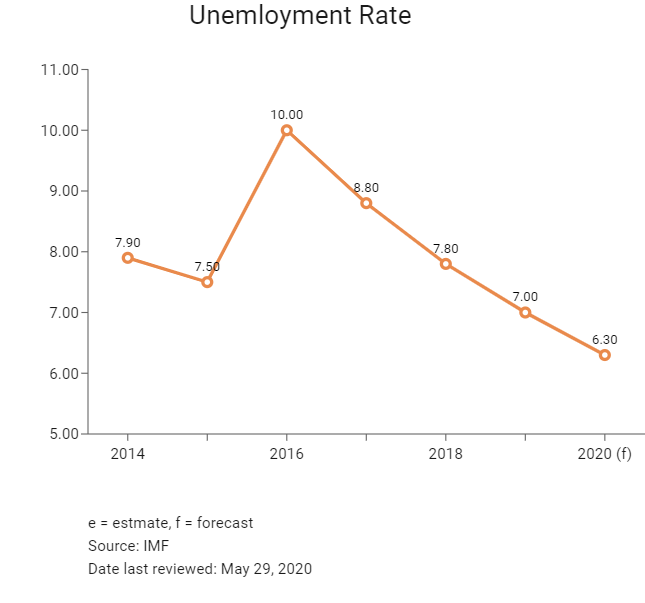 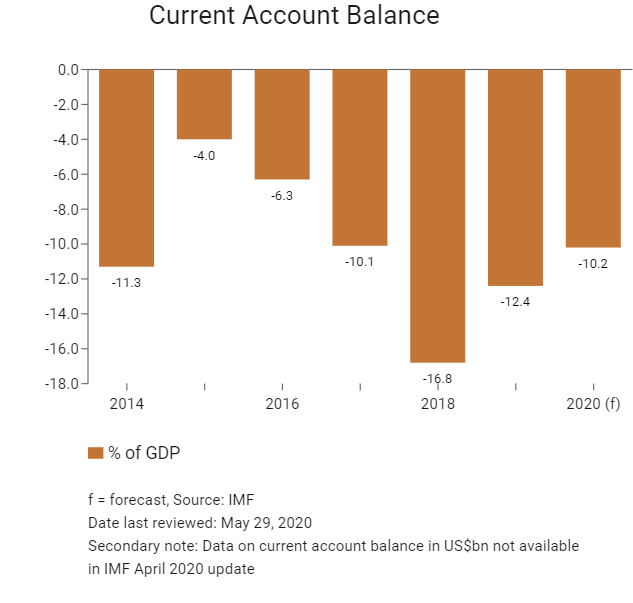 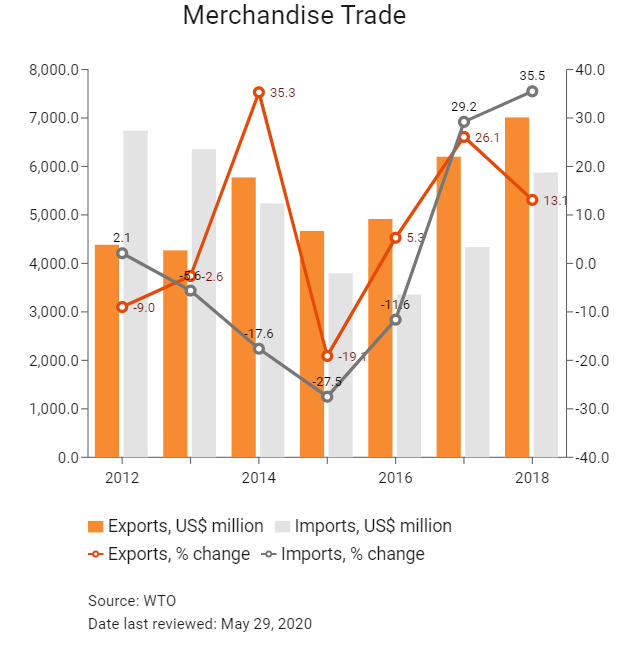 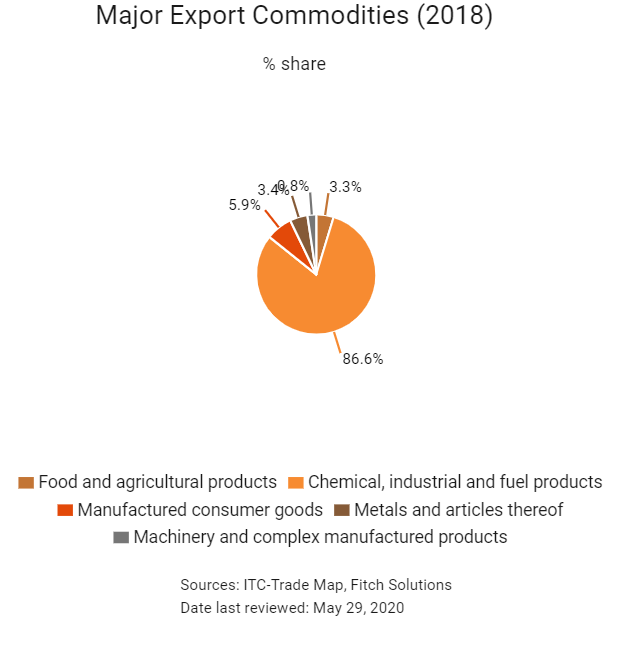 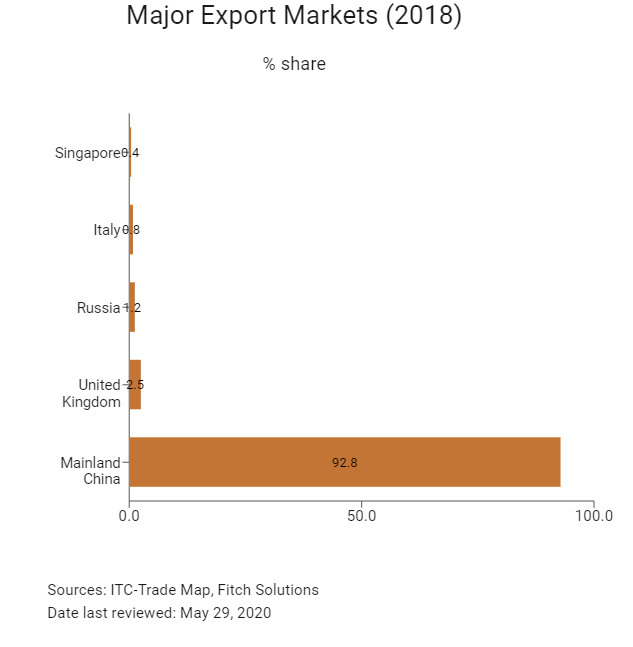 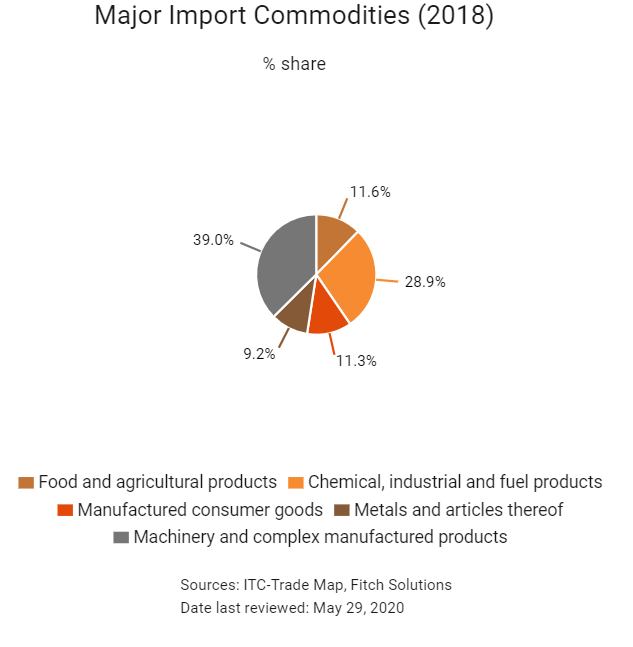 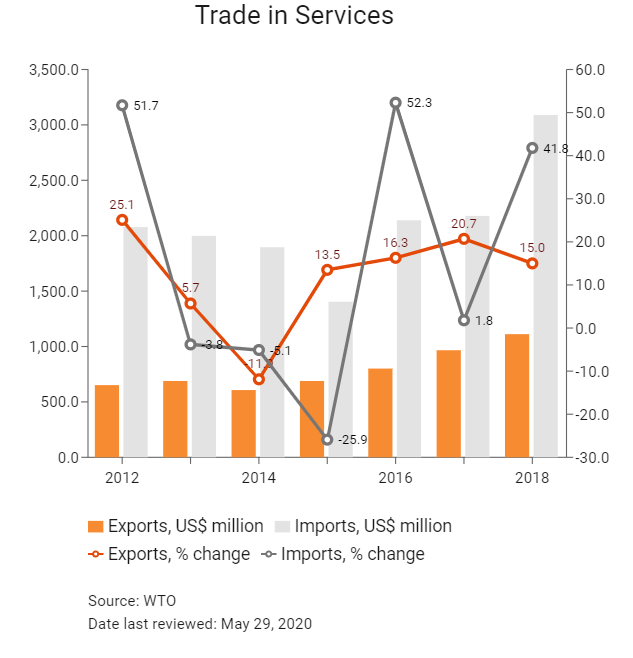 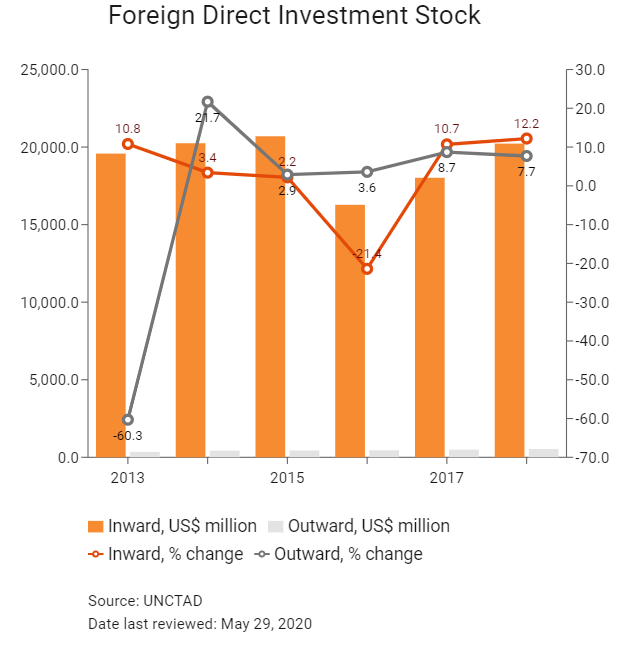 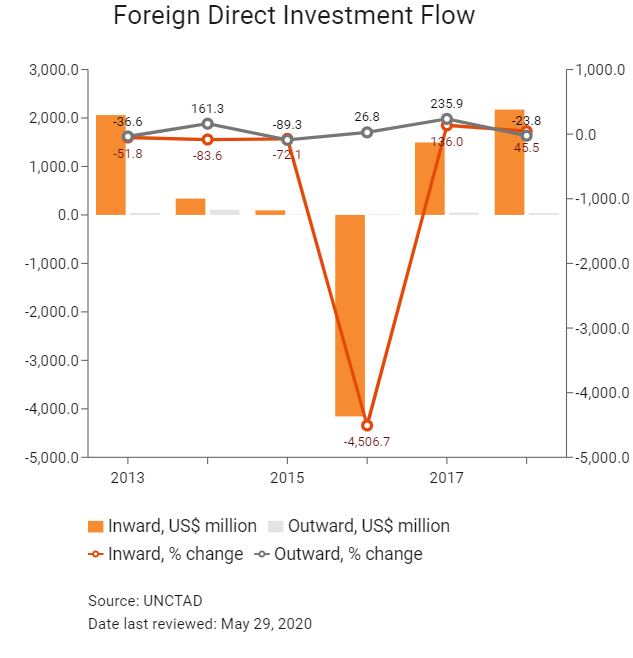 The government of Mongolia sets a foreign worker quota (updated annually), for both locally owned and foreign invested companies operating in Mongolia. In 2019, the quota ranged from 10% to 60% depending on the industry sector and number of employees. For some sectors that are not directly mentioned in the Resolution, the total number of foreign employees should not exceed 5% of the total headcount. In general, the quota is high for businesses seeking to import skilled labour as well as for businesses in the construction industry, whereas it is low for low-skilled occupations, such as agriculture, fishing and hunting.

Foreigners are required to have a Mongolian visa to enter the country. However, the Mongolian government has an open policy towards outside investment and the requirements for a work permit are comparatively less strict and the cost is relatively not high.

An organisation employing workers and specialists from abroad is required to pay a fee for employing a foreigner. Unless otherwise noted in trade agreements with specific countries, the fee must be paid on a monthly basis. The fee is linked to a minimum concentration amount that is periodically updated and approved by the government. The revenue generated from this fee is used to fund government programmes designed to combat unemployment in Mongolia.

Nationals from many countries around the world can generally access Mongolia visa free, especially for stays less than 30 days. Business visitors must generally limit their activities, such as attending business meetings, negotiations, participating in exchange programmes, conferences, seminars or congresses and taking part in workshops on trade and economic questions.

Foreign employees must be sponsored by a local Mongolian company in order to obtain permits for the country and work legally.

There are different types of visas in Mongolia. Expatriates wishing to enter employment in Mongolia require a work permit from the Labour Office, an HG visa and a long-term residency permit. HG visas will be issued for as long as the work permit has been issued, up to a maximum of 12 months, with the possibility to extend each year.

A T visa is a special visa given to either an investor or a foreign executive director of a foreign company. A maximum of three may be issued per company ­­­­– ­­­two for individual investors in a company and one for the executive director of the company. Like an HG visa holder, a T visa holder will need to register with immigration within seven days of arrival or face stiff penalties. T visas are valid for a year and can be renewed annually. The advantage of a T visa is that the holder does not need to have a work permit to work (or pay the associated workplace fee), and the T visa holder does not count against a company's quota of foreign workers. If the foreign invested Mongolian company has a corporate shareholder, that company is limited to a single T visa for the executive director.

ECONOMIC RISK
Despite Mongolia's enormous current account deficit and large net negative international investment position, the country's overall balance of payments position will remain sustainable over the coming years. While the mining sector output capacity is likely to grow over the coming years, there are increasing downside risks due to a resurgence of resource nationalism in Mongolia. The ruling MPP government has moved to renegotiate agreements governing the Oyu Tolgoi mine run by Rio Tinto, which has resulted in greater costs for the latter. Should this trend persist, the country's long-term economic outlook would be at risk. The economy is expected to contract slightly in 2020, as the external sector suffers from low global commodity demand and constrained spending weighs on domestic activity. Uncertainty in commodity markets, rising political tensions and a slower pace of reforms to the banking sector are the key downside risks going forward.

OPERATIONAL RISK
Mongolia offers an attractive proposition for investors, with an impressive growth rate, a booming mining sector and a reasonably well-educated labour force. The key areas of concern for businesses looking to operate in the country are its logistics and trade and investment environments. Despite being rich in natural resources, the country is still heavily reliant on Russia for electricity imports. Additionally, insufficient and poor road and rail networks, as well as high levels of trade bureaucracy, mean that getting goods into and out of Mongolia is both timely and costly. The local economy is heavily centred around commodities production and, with a poor businesses environment, has struggled to attract foreign investment in other areas. The country's security and labour environments are more attractive as Mongolia is considered politically stable and has a fairly large, young labour pool. Education levels are considered adequate by global standards, and trends in migration from rural to urban centres mean that the skills base is developing away from agriculture towards more technical roles. 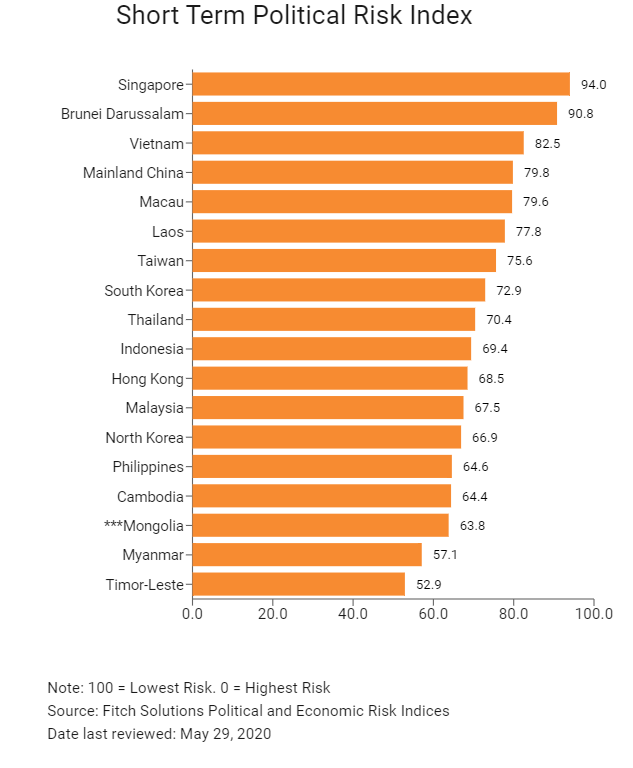 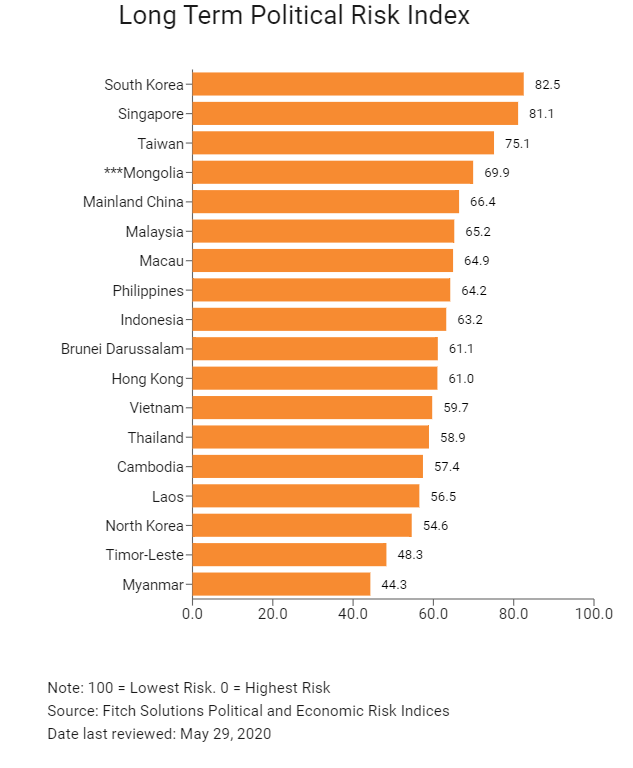 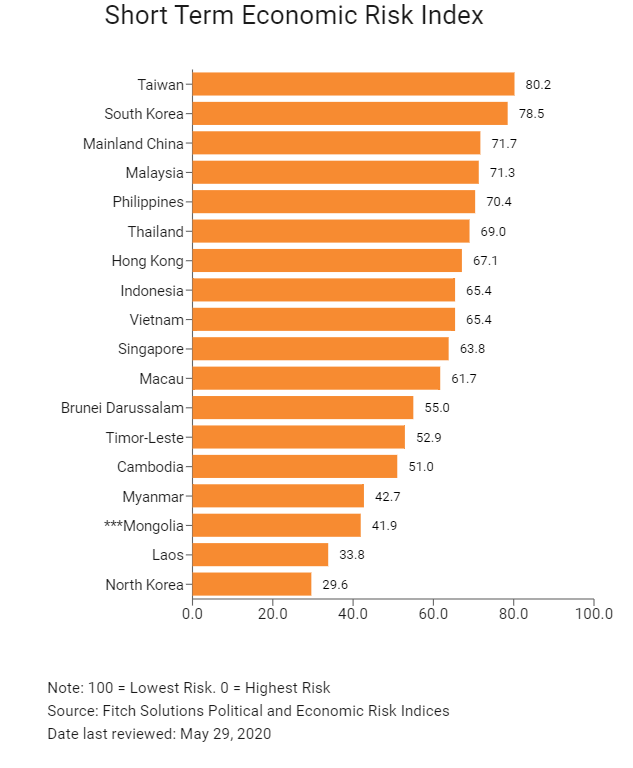 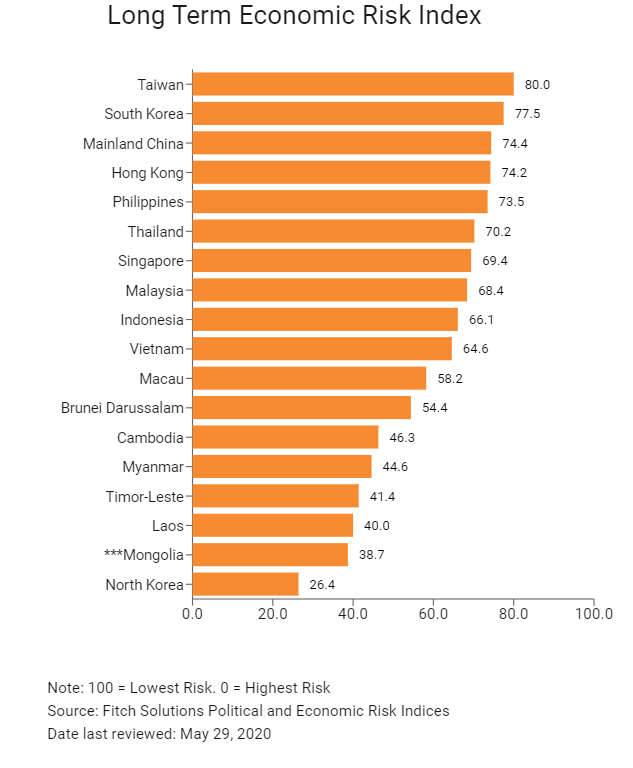 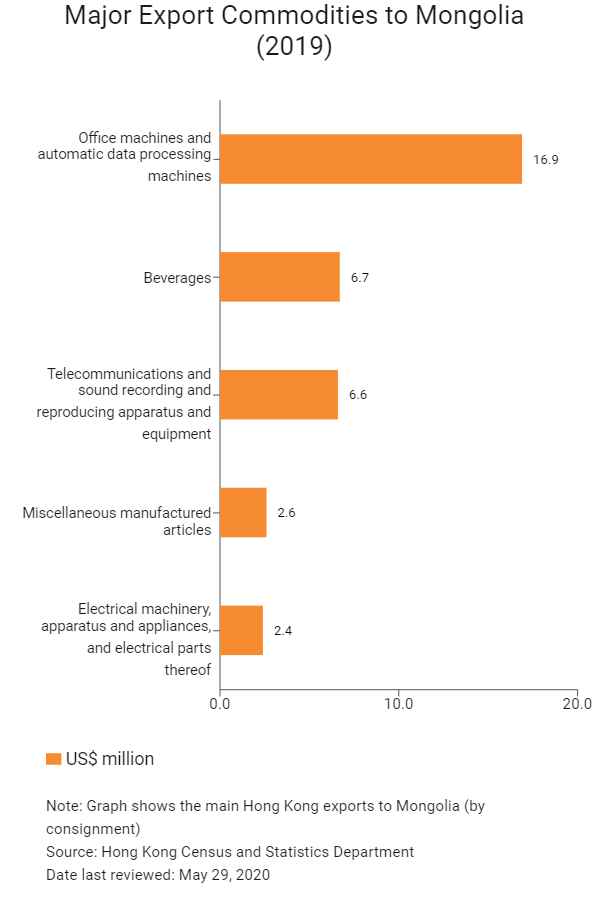 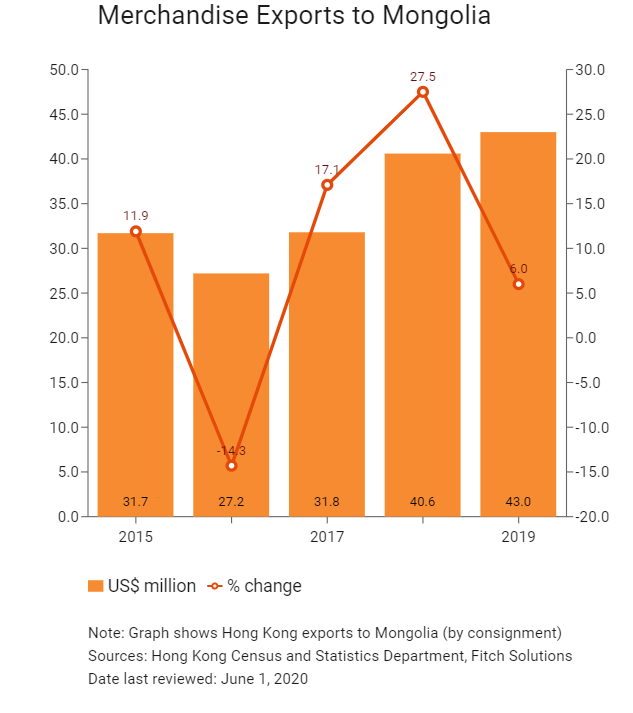 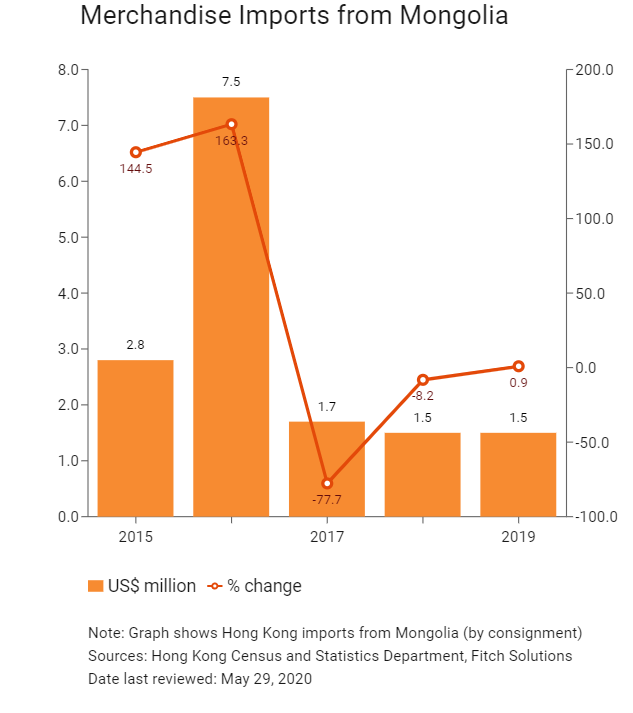 Treaties and Agreements between Hong Kong and Mongolia

Mongolia and Mainland China have a Bilateral Investment Treaty, which came into force in November 1993.