Laos is one of the fastest-growing economies in East Asia and the Pacific, underpinned by improving access to electricity, education and roads, as well as the implementation of structural reforms aimed at improving the business environment. However, it still lags behind its regional peers. The country’s economic performance will cool somewhat over the medium term as the recent accumulation of public debt places increased pressure on its growth potential. The government is seeking to maintain macroeconomic stability by taking steps to improve domestic revenue collection, control expenditure and strengthen public debt management.

April 2016
At its five-year congress, the National Assembly appointed Bounnhang Vorachith as president and leader of the ruling Lao People's Revolutionary Party (LPRP), succeeding Choummaly Sayasone who, served as the ruling party's general secretary and president of Laos from 2006 to 2016.

December 2016
The governments of Laos and Mainland China announced the joint construction of a high speed rail line between Mainland China and Thailand to link Laos with the transport hubs in these countries.

July 2018
The collapse of a dam in July triggered a pause in the approvals of new hydropower projects and an official review of all existing ones in the country.

August 2018
A consultation process (scheduled to last six months) began for the proposed 770MW Pak Lay hydropower project on the Mekong mainstream in Laos. The consultation involved two regional stakeholder forums and a field visit to the Pak Lay project. The power plant was estimated to require a USD2.13 billion investment. Construction is likely to begin in 2022.

August 2018
Mainland China Southern Power Grid Co signed a memorandum of understanding with the Government of Laos to carry out a feasibility study to explore the possibilities of developing a national power grid in Laos.

December 2018
The Chinese government approved a special fund at the 4th Mekong-Lancang Cooperation Foreign Ministers’ Meeting. The fund would enable Mekong countries to carry out 138 projects, with Laos receiving about USD4.5 million to implement 21 projects.

June 2019
New 500kV and 230kV transmission lines would be installed in the capital city, Vientiane, as a joint project between Électricité du Laos and Mainland China Electric Power Equipment and Technology, an affiliate of State Grid Corporation. The project would provide a sustainable supply of electricity for the development of the capital city.

June 2019
Mainland China and Thailand announced that they had  banned the direct and indirect import of pigs, wild boars and related products from Laos owing to the first African swine fever outbreak reported by the country.

July 2019
Souliyapon Intertrade Co selected China Machinery Engineering Co (CMEC) to serve as the general contractor for a 230MWp solar photovoltaic  project in Laos's Borikhamxay Province. Under the USD345 million contract, CMEC will be responsible for the power plant's design, supply, civil engineering, construction, installation, commissioning and other works. The deal was subject to certain conditions. The construction of the facility is expected to be completed over a period of two years.

September 2019
Tropical storm Podul and tropical depression Kajiki caused flooding in Laos' southern provinces, which caused more than 580,000 people to be displaced and damaged infrastructure and crops in the region.

October 2019
The Government of Laos signed a memorandum of understanding with Petroleum Trading Lao to carry out a feasibility study and complete detailed design for the Laos-Vietnam railway Project. The rail line would start from Thakhaek district in Khammuan province of Laos to Vung Ang seaport in Vietnam's central Hà Tinh province. The single-track railway line would cover around 150km in Laos and another 120km on the Vietnamese side. It would be used for both freight and passenger transport. The study was expected to be completed between eight and 12 months. Construction was expected to start by the end of 2021, with completion expected by 2024.

February 2020
Laos and Thailand held a meeting from February 25-26, 2020, aimed at boosting bilateral trade and investment.

March 2020
Construction started on the power supply project for Laos-Mainland China railway scheme. The power supply project, running along the railway line through five provincial administrative regions in northern Laos, involved the construction of 20 circuits of 115kV transmission lines, totalling 268km, as well as 635 power towers. The project would extend 11 bays in 10 substations to supply power from Electricite du Laos (EDL) grid to 10 railway traction substations. The project was being executed by a joint venture between China Southern Power Grid Yunnan International Co and EDL on a build-operate-transfer model. The project is due to become operational in March 2021. The 414km railway line will run from the Boten border gate at the Laos-Mainland China border to Vientiane and is due to be operational in December 2021.

April 2020
A proposed 13-measure economic stimulus package was endorsed by the cabinet. Measures included establishing a separate task force to address the economic impact of Covid-19. A new electricity tariff to ensure the supply of electricity, in effect from May 1, 2020, through December 31, 2025, had been approved. Other policies included duty fee exemption for imports of goods to be used specifically for the outbreak, exemption of profit tax (PT) for businesses earning between LAK50 million and LAK400 million for the June quarter of 2020, deferring tax collection from tourism-related businesses for three months; postponing mandatory contribution to social security by affected businesses for three months, and extending the road tax payment by three months. 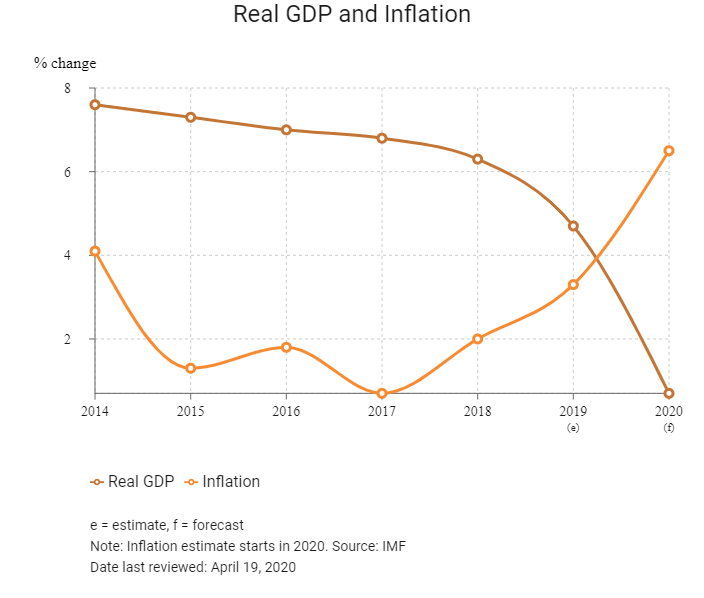 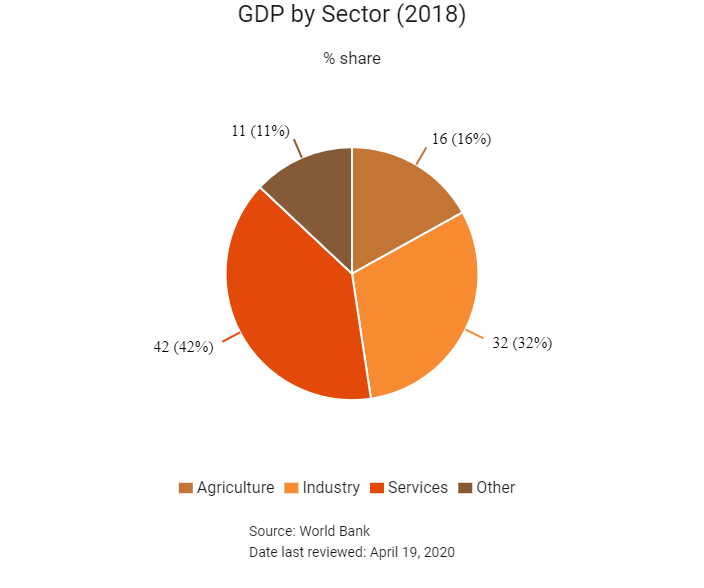 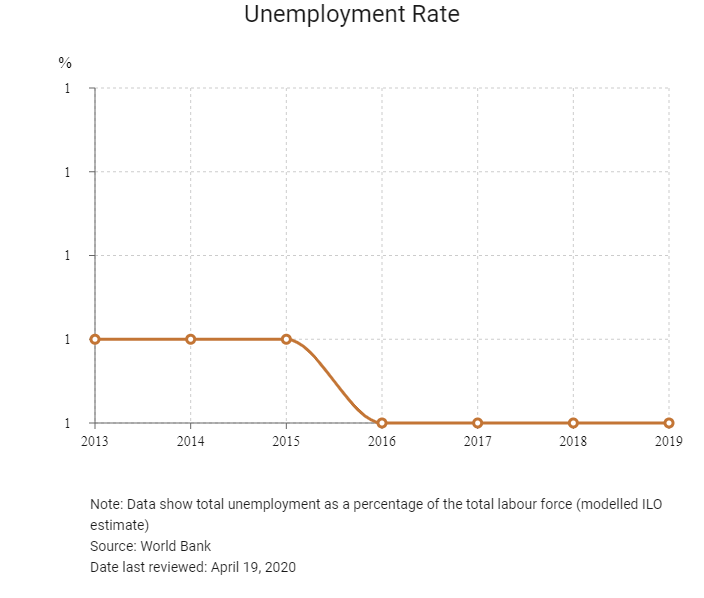 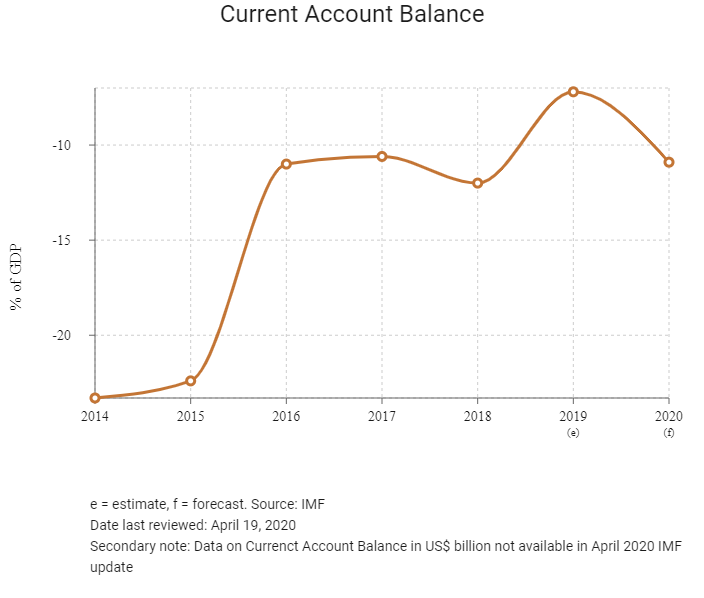 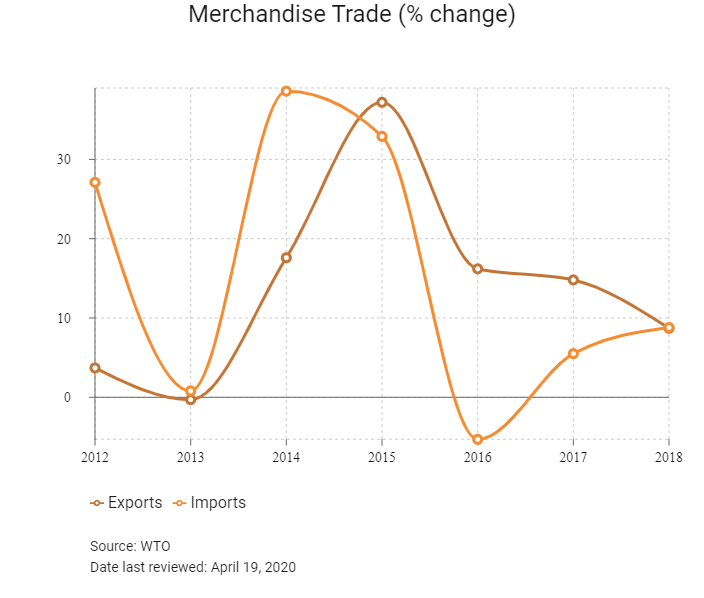 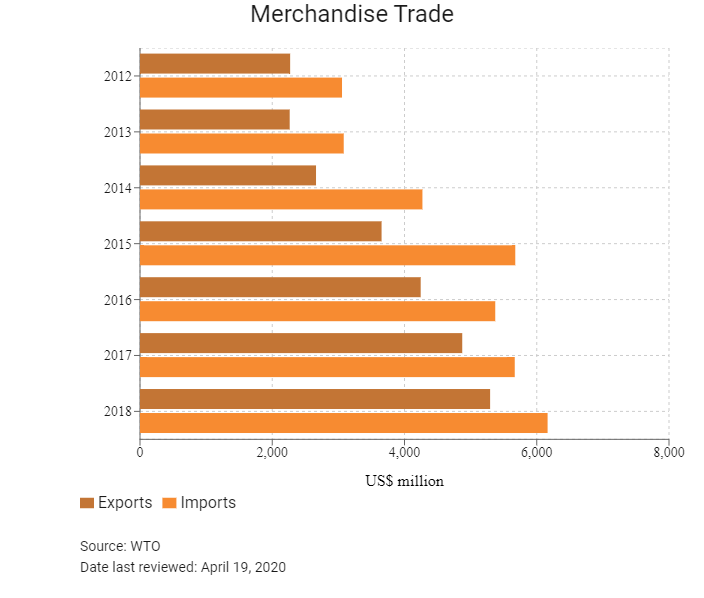 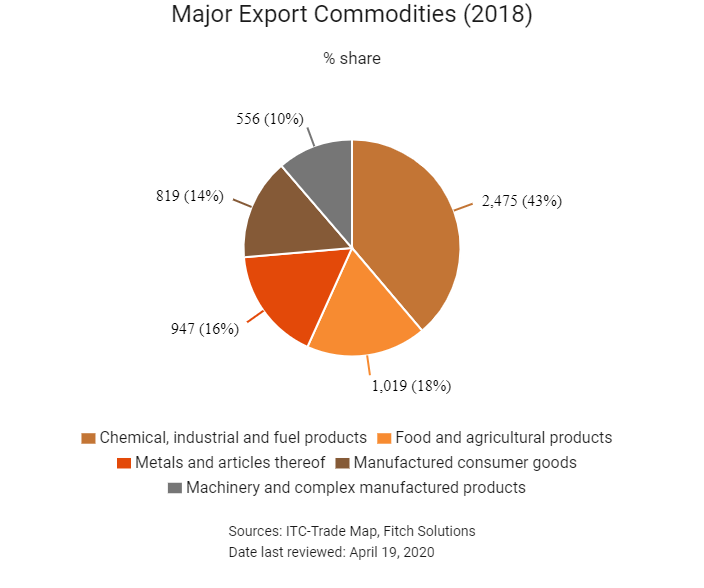 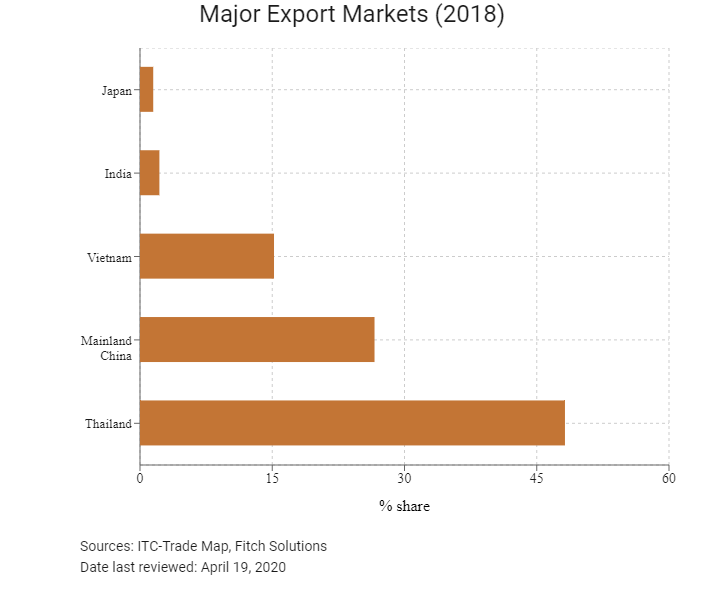 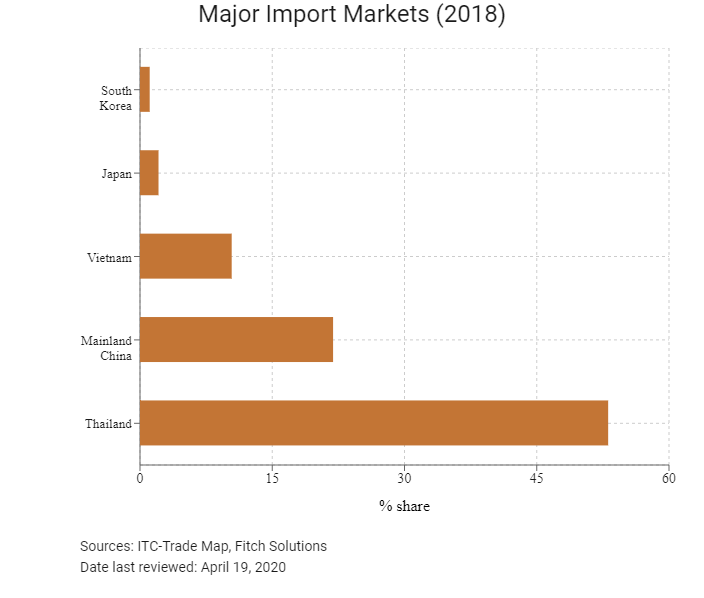 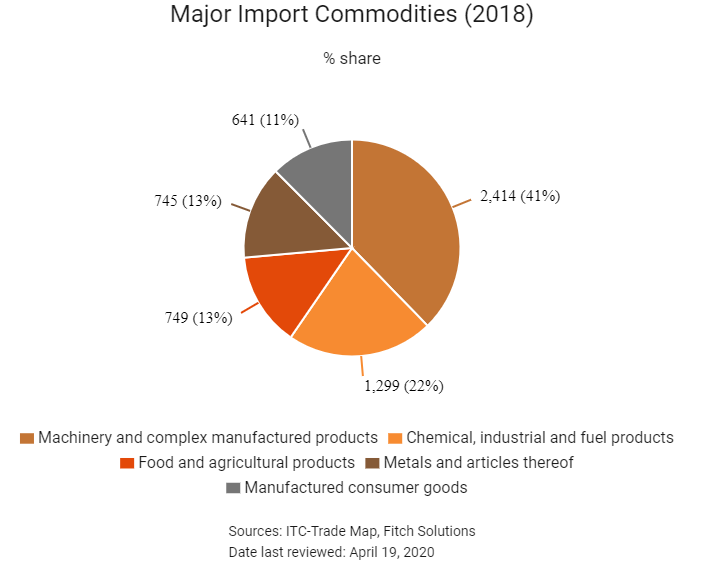 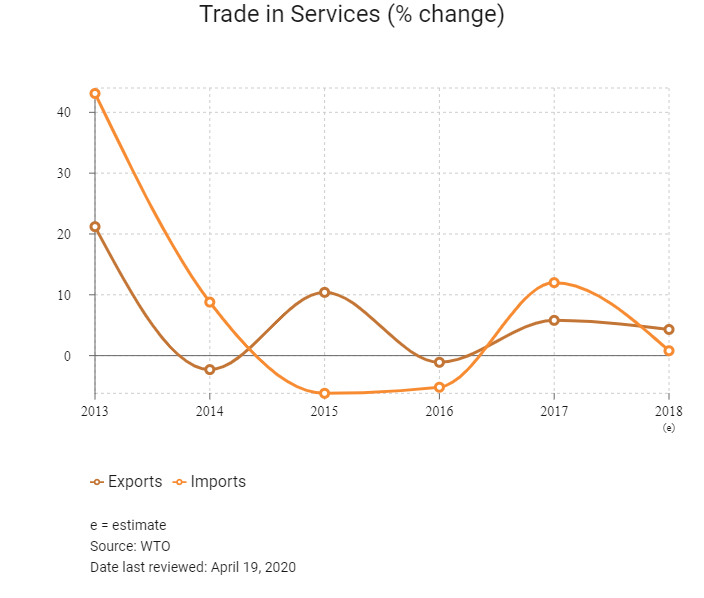 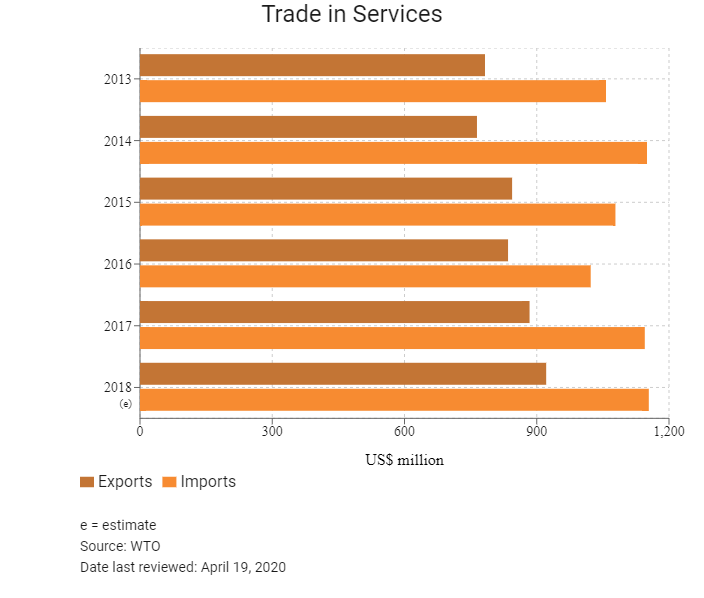 Regional Comprehensive Economic Partnership (RCEP): Negotiations on a framework agreement for RCEP stalled after India announced its withdrawal from the trade pact at a RCEP summit held in Bangkok in November 2019. Expectations had been for negotiations to conclude in 2019, paving the way for the agreement to enter into force by late 2020. RCEP negotiations without India may now be concluded in 2020, but the withdrawal of India represents a setback to attempts to counter the growing wave of protectionism in the US and other parts of the world. RCEP will have broader and deeper engagement with significant improvements over existing regional FTAs and agreement will need to be reached on politically sensitive issues, including trade in services, investment rules and protection for intellectual property rights, as well as tariffs, where the target is to remove trade barriers on at least 92% of products within ten years. Formally launched in 2012, RCEP is a Mainland China and ASEAN-led project which, before the withdrawal of India, involved 16 countries, namely the  ten ASEAN countries and the ASEAN Free Trade Partners (Australia, Mainland China, India, Japan, South Korea and New Zealand). It would have been the world’s largest trade pact covering nearly half the world’s population, one third of global GDP and around 29% of global trade. 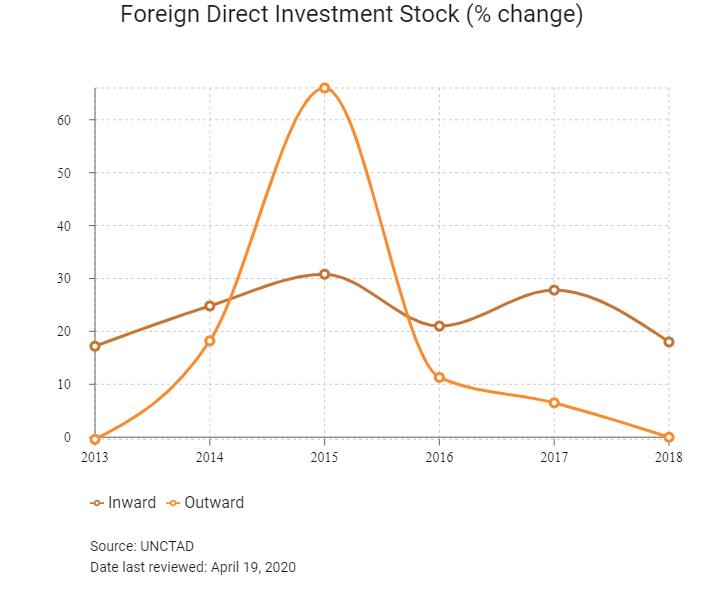 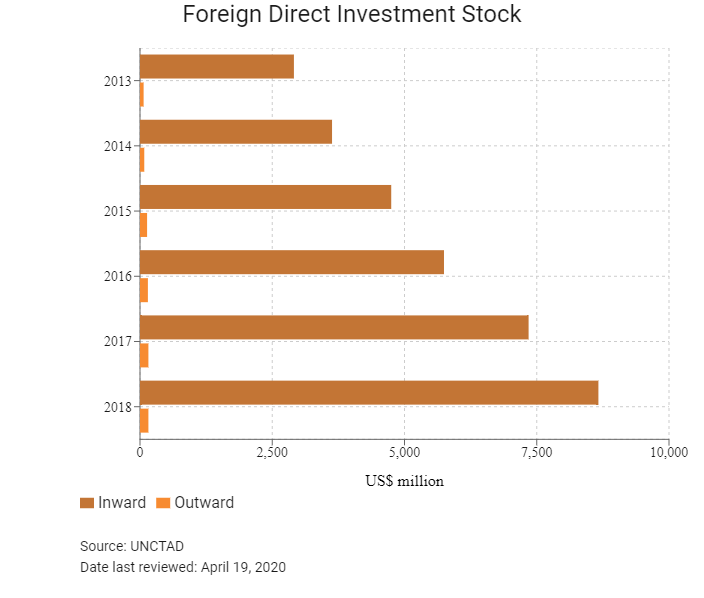 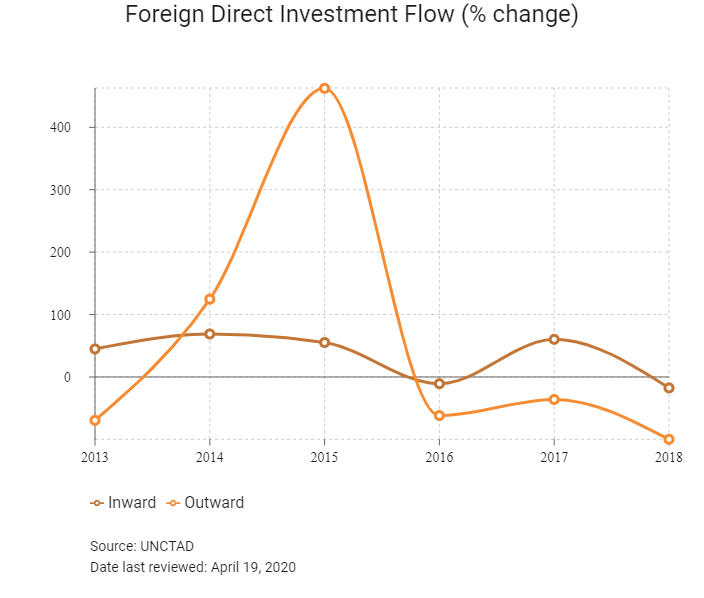 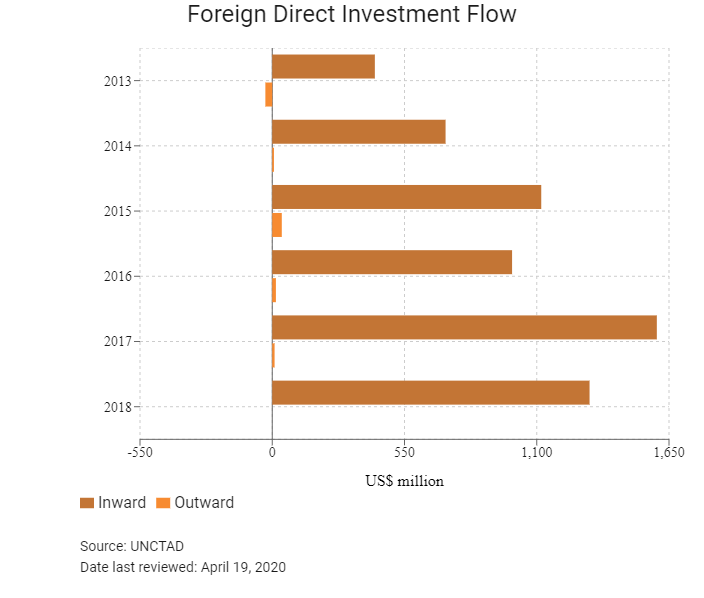 The passage of the revised State Budget Law (SBL) in December 2015 should help to strengthen public financial management in Laos over the coming years. According to the Ministry of Finance, the revised law, which became effective in 2017, will help to strengthen the authority of the National Assembly in budget oversight, as well as enhance the capacity of the Ministry of Finance in budget management. Greater fiscal discipline and monitoring, as well as improving regional integration, will have positive implications for the tax burden that firms and individuals in the country face.

Employers are required to give priority to Lao nationals. To employ foreign nationals, approval must be obtained from the Ministry of Labour and Social Welfare. Foreign workers also need to possess a skill that is in short supply in the country. Companies must make a proposal through the Skills Development and Employment Department of the Ministry of Labour and Social Welfare or through the labour sections of provinces or municipalities in order to hire foreign employees. The total percentage of foreign workers as a proportion of the total workforce is capped at 10% for foreign workers undertaking menial labour and 20% for professionals with specialised skills. Foreign workers are allowed to enter into employment agreements for an initial period of 12 months, renewable for another 12 months. The period of employment for a foreign worker in Laos cannot exceed 5 years in total. Depending on the expertise of the employee and the requirements of the business, employers can request from the Labour Administration Authority that a foreign worker continues working for another additional period, which cannot exceed 5 years.

Foreign workers are legally required to have a valid employment visa and work permit before commencing work in Laos. A sponsor is required from a locally licensed and incorporated entity in order to apply for work permits. There are different types of work visas issued in Laos. A labour visa (LA-B2) is the most common type held for the purposes of living and working in Laos. Work visas may be valid for a period of 3, 6 or 12 months and are be renewable for a total period not exceeding 5 years.

Laos has an open visa policy. Nationals from member states of the ASEAN do not require a visa to enter Laos for a limited stay of between 14 and 90 days, depending on the country and type of passport held. Nationals of many countries can be issued a visa on arrival; however, nationals of certain countries are not eligible for a visa on arrival and must secure one in advance. On July 11, 2019, Laos launched its e-visa service to streamline the application and approval process. However, the e-visa system can currently only be used at three international ports: Wattay International Airport, Lao-Thai Friendship Bridge 1 and Luang Prabang International Airport.

ECONOMIC RISK
Benefits to the economy stem from growth in the power sector, ASEAN regional growth and a robust infrastructure project pipeline. However, downside risks to the country's long-term economic outlook are widespread poverty, weak public finances, elevated external debt stock, low import cover, and an underdeveloped financial system. These factors leave the country vulnerable to shocks, particularly as economic activity cools. At the same time, a narrow economic base and heavy dependency on just a handful of regional trade partners also pose risks to the country's ability to sustain its economic growth momentum. In 2020 private consumption will come under strong headwinds due to the Covid-19 pandemic as a general aversion to travel due to virus concerns globally is taking a heavy toll on tourism-related services in Laos - a sector that accounts for 12.0% of GDP (both directly and indirectly) and 10.5% of employment in the country.

OPERATIONAL RISK
The major industries in Laos include mining, hydropower, agriculture and light manufacturing. As a developing state that is still in the process of implementing investor-friendly reforms and regional economic integration, Laos poses a number of pertinent operational risks to businesses. The small and largely undiversified labour market suffers from limited skills development, particularly in rural areas. The transport network is underdeveloped and relies heavily on a poor-quality road system and limited alternative freight options, increasing logistics costs that are already elevated owing to burdensome trade bureaucracy and high fuel costs. 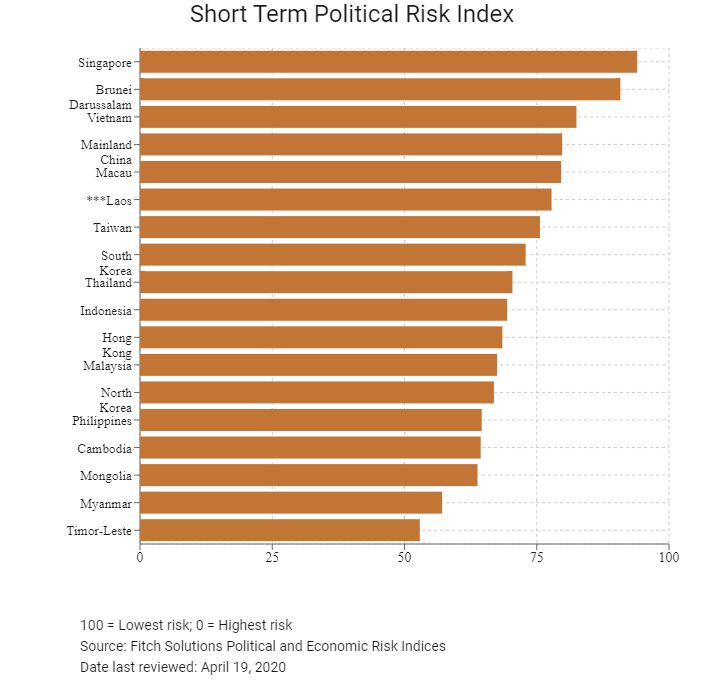 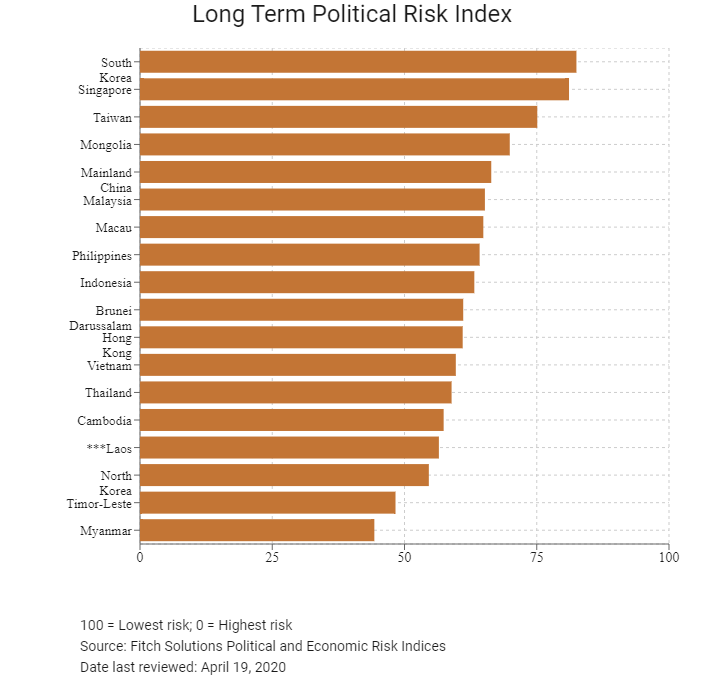 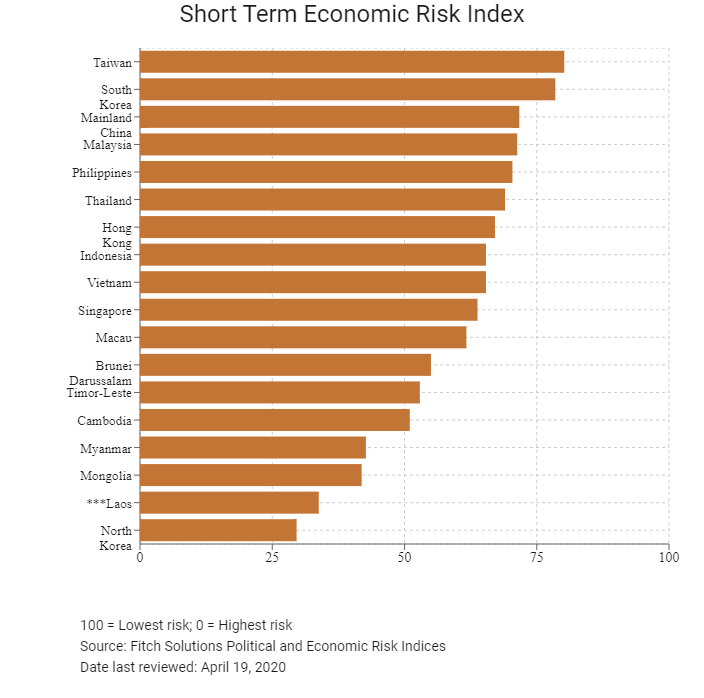 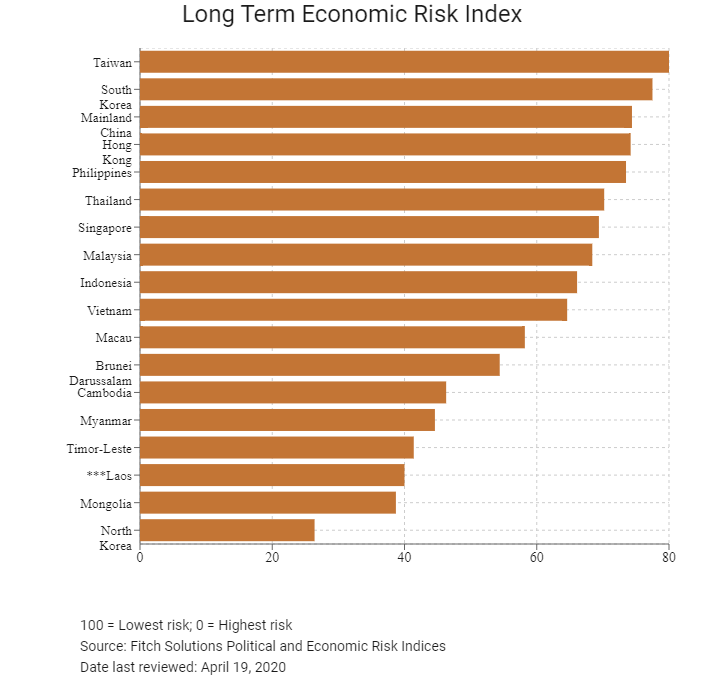 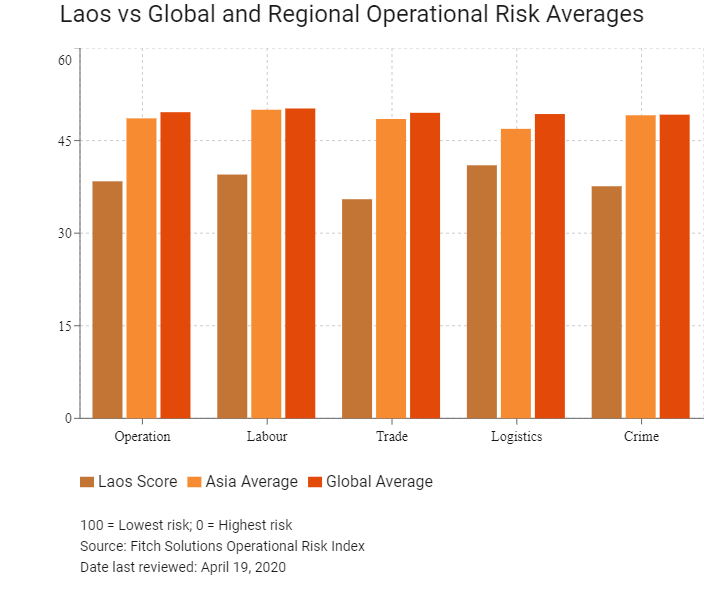 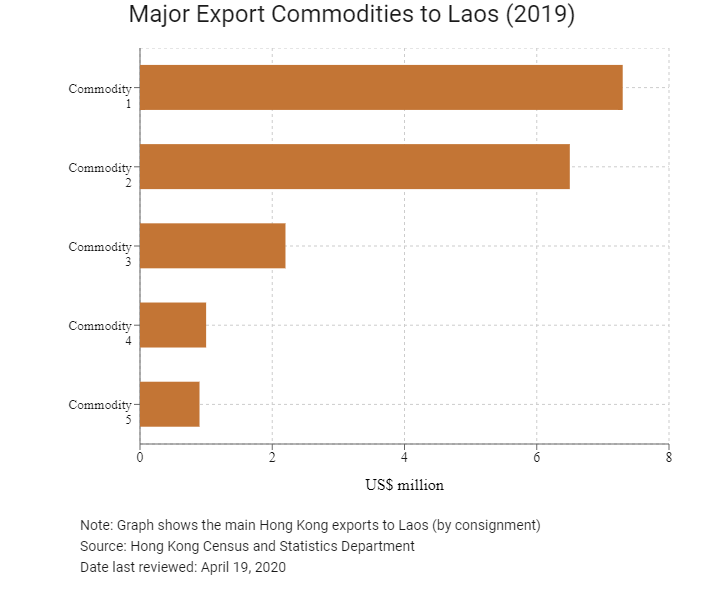 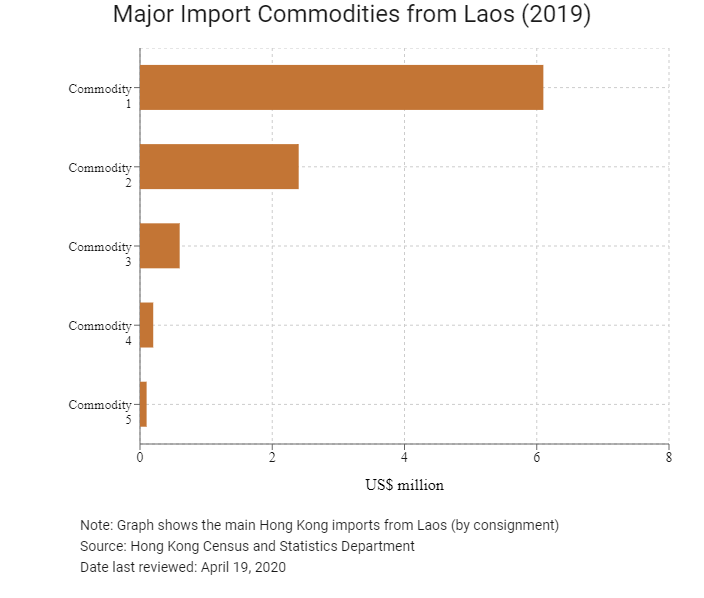 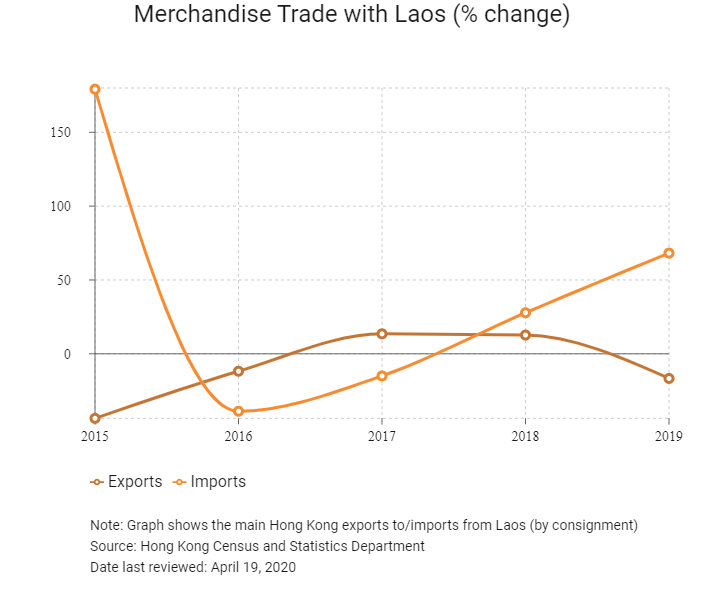 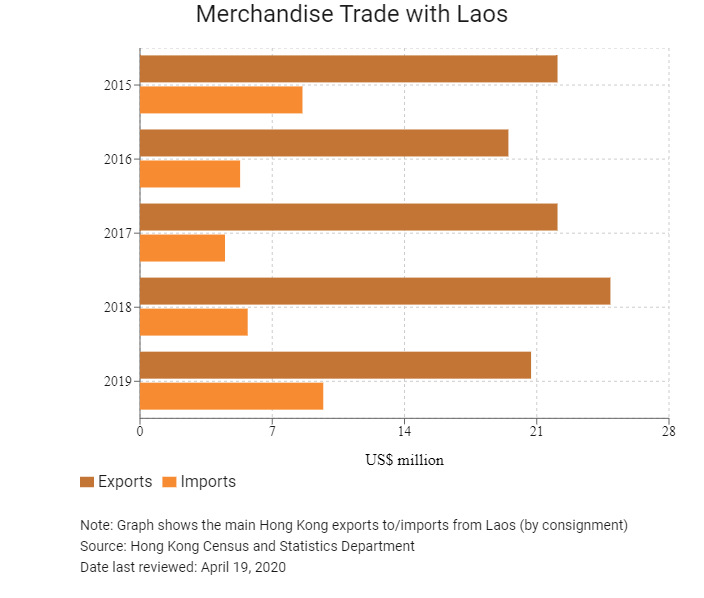 Treaties and Agreements between Hong Kong and Laos

Hong Kong-ASEAN Economic Cooperation Foundation (HKAECF)
The main activities of HKAECF are to contribute to the fostering, promotion and facilitation of economic cooperation between Hong Kong and the 10 member countries of ASEAN ('1+10'), and between the ASEAN region and Mainland China ('10+1') with Hong Kong serving as a high value-adding and facilitating key international hub, bridge, connector, promotor and investor.