Italy's economy, which ranks among the top 10 largest in the world, is largely diversified and dominated by small- and medium-sized firms which comprise 99% of Italian businesses. Economic growth has been driven by exports, tourism, private consumption and investment. However, the economy's exporting sector, which has been shifting towards higher value-added products, has underperformed compared with its eurozone competitors, and this is expected to continue owing to long-standing competitiveness issues and Italy's rigid labour market. Government policies, such as the Industry 4.0 programme, and labour market and education reforms, have begun to address these problems. Italy's relatively affluent domestic market, access to the European Common Market, proximity to emerging economies in the Middle East and North Africa, and assorted centres of excellence in scientific and information technology research remain attractive to many investors. The impact on Italy's economy of the Covid-19 pandemic has been so severe that the government has taken action in response to fears that good but distressed Italian companies – especially the small- and medium-sized businesses that are the lifeline of the national economy – could be acquired at temporarily low prices.

December 2018
The Government was forced to scale back budget spending plans after EU objections.

January 2019
The Italian economy slipped into recession in the last quarter of 2018.

February 2019
The port of Trieste officially opened its new FREEeste free trade zone (FTZ) area, which was linked to the railway station at Aquilinia.

February 2019
The Italian parliament's 18-month moratorium on oil and gas exploration permits, intended to assist with the transition to a low-carbon future, affected 70 pending permits and was a blow to an already struggling industry. The ban increased Italy's reliance on hydrocarbon imports.

The government introduced generous subsidies to stimulate the electric vehicle market, with a total budget of EUR60 million. However, accessed to charging station infrastructure remains limited.

April 2019
The economy edged out of recession in the first quarter of 2019 after two successive quarters of contraction. The expansion, although low (at 0.2%), was supported by the external sector, while domestic demand dragged on growth.

The European Commission (EC) approved, under EU state aid rules, a scheme with an estimated budget of EUR5.4 billion to support electricity production from renewable sources in Italy.

July 2019
The EC decided that the Italian government's mid-year budget of July 1 meant that Italy had made an additional fiscal effort to ensure compliance with the Stability and Growth Pact and that progress with structural reforms should ensure higher growth and a decreased debt-to-GDP ratio. That effort meant it was not necessary to open an Excessive Deficit Procedure against the country.

August 2019
League party leader Matteo Salvini withdrew from the government in the hope of triggering early elections. However, the Five Star Movement and centre-left Democratic Party agreed a new coalition without the League party.

September 2019
The new coalition government between Five Star Movement and the Democratic Party was sworn in. Giuseppe Conte retained his position as Prime Minister.

January 2020
The governments of Israel, Greece and Cyprus signed an agreement for the construction of the USD7 billion Eastern Mediterranean (EastMed) natural gas pipeline connecting East Mediterranean resources to Greece via Cyprus and Crete.  Initially, the pipeline was expected to transport 10 billion cubic metres of gas annually, which was projected to double in the future. A final investment decision on the project was expected by 2022 and the pipeline was expected to be completed by 2025.

Italy declared a state of emergency for six months in response to the severe effects being felt in the country of the Covid-19 global pandemic.

A bacterial infection caused by spittlebug insects had been causing widespread damage to olive trees in Italy, wiping out some ancient groves. To avert significant losses action is needed that would probably result in a rise in olive oil prices.

The Renzo Piano-designed replacement bridge in Genoa for the Morandi bridge that collapsed in August 2018 was inaugurated and was expected to open to traffic in July. The new bridge restores an important route for commercial trade between Italy and France.

Milan announced an ambitious scheme to reduce car use after the Covid-19 lockdown by giving over 35 kilometres of city streets to pedestrians and cyclists.

May 2020
Italy began cautiously to ease the lockdown enacted to tackle the Covid-19 pandemic, restarting the economy by reopening some businesses and workplaces. Italian bonds had dropped the most in the eurozone.

Venice announced it was postponing the introduction of its day visitor tourist tax until July 1, 2021.

The Italian government announced plans to inject EUR3 billion into Alitalia to save the national airline from collapse. 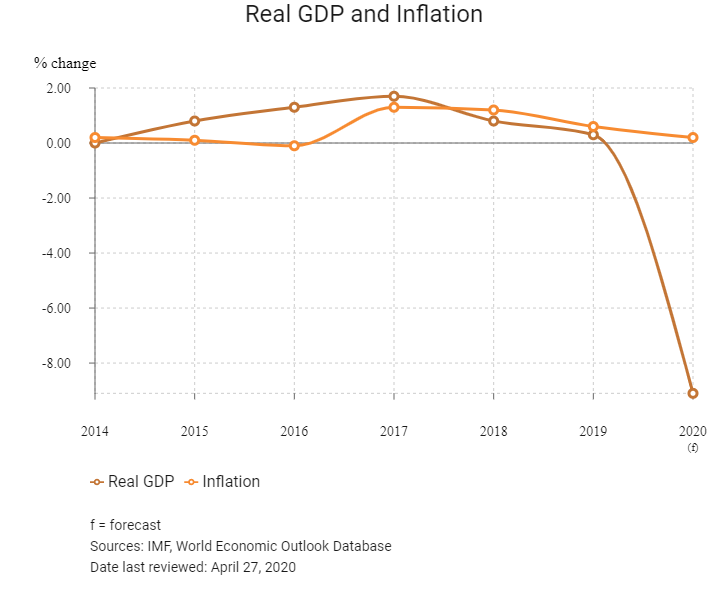 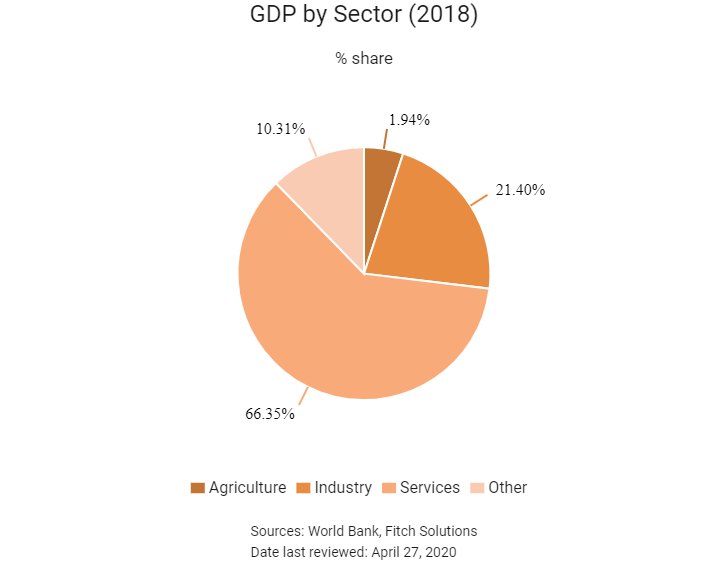 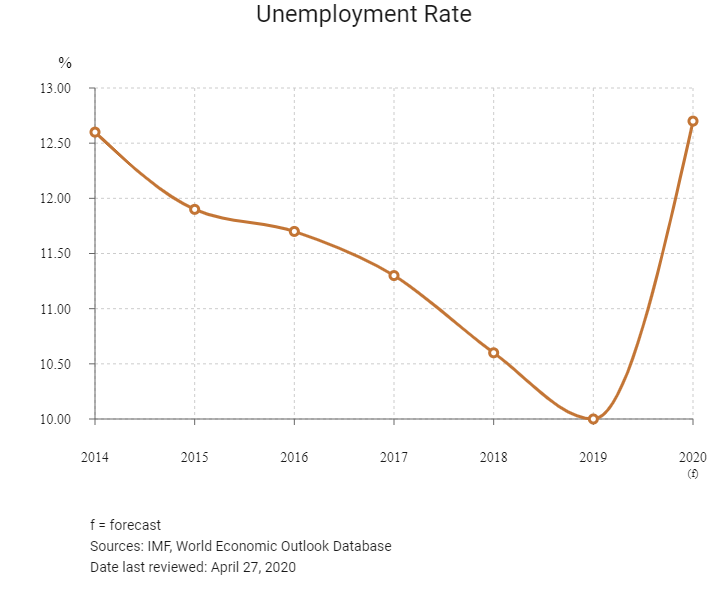 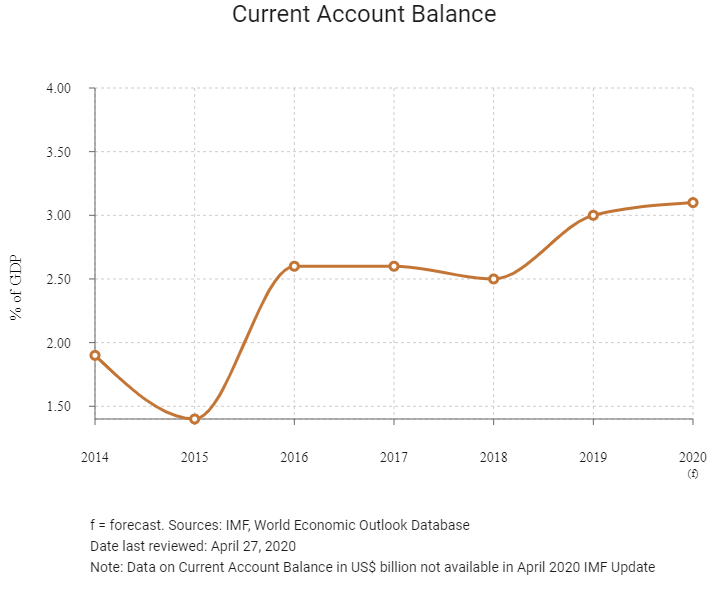 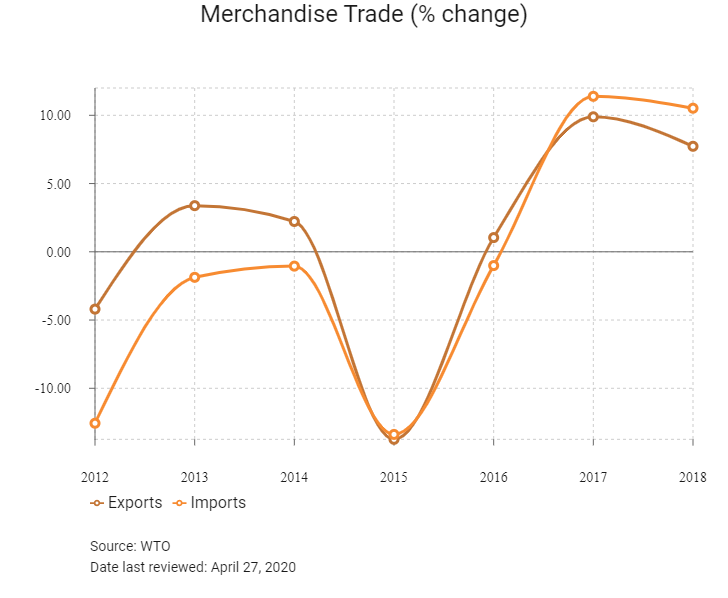 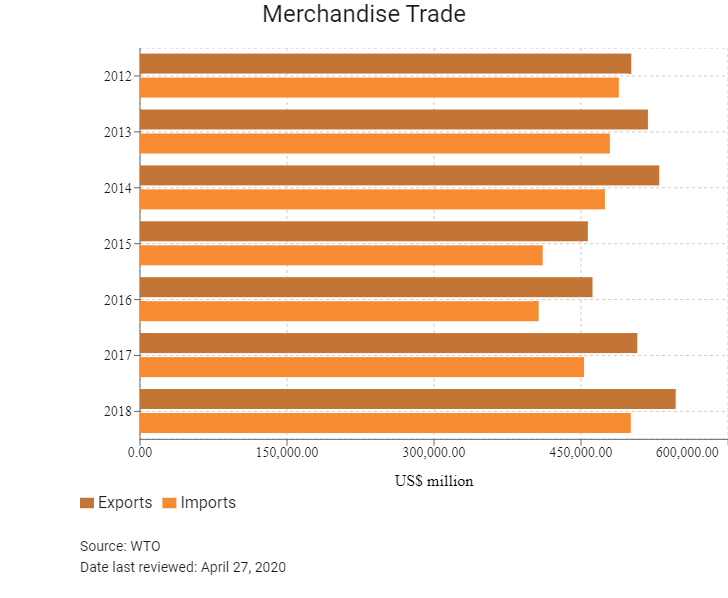 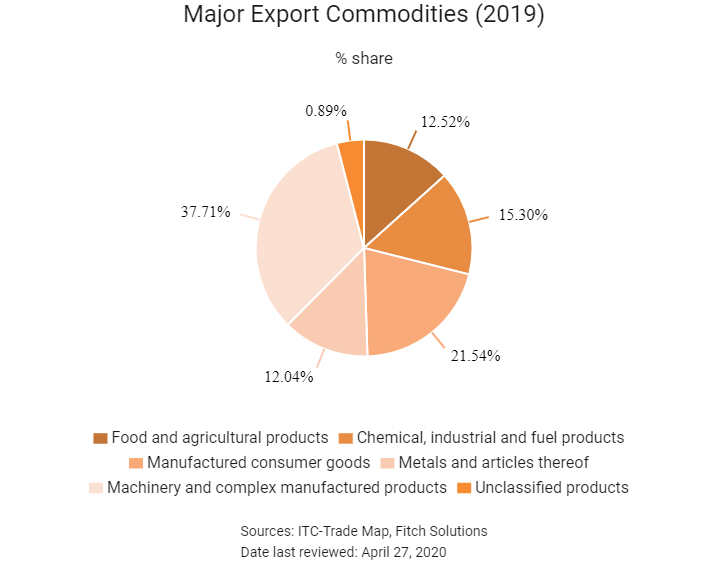 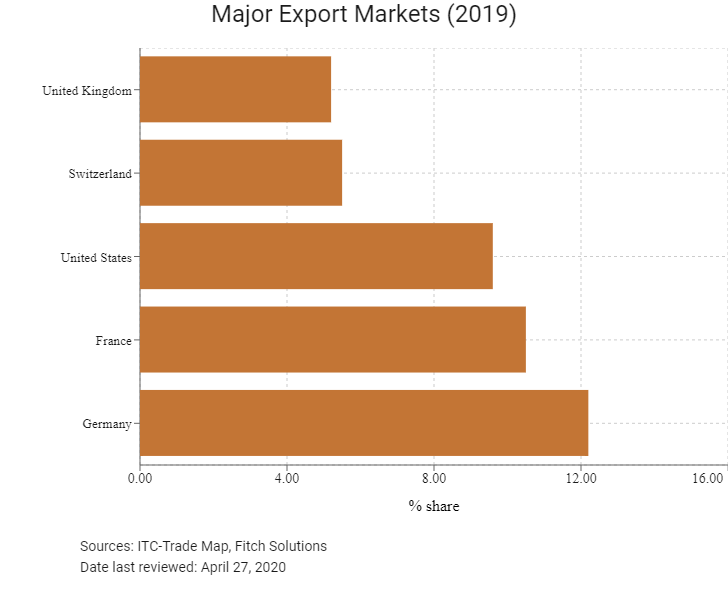 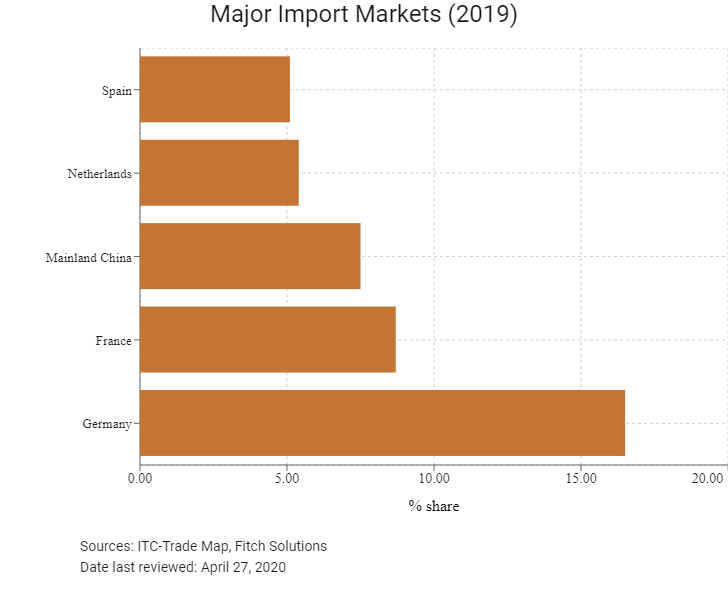 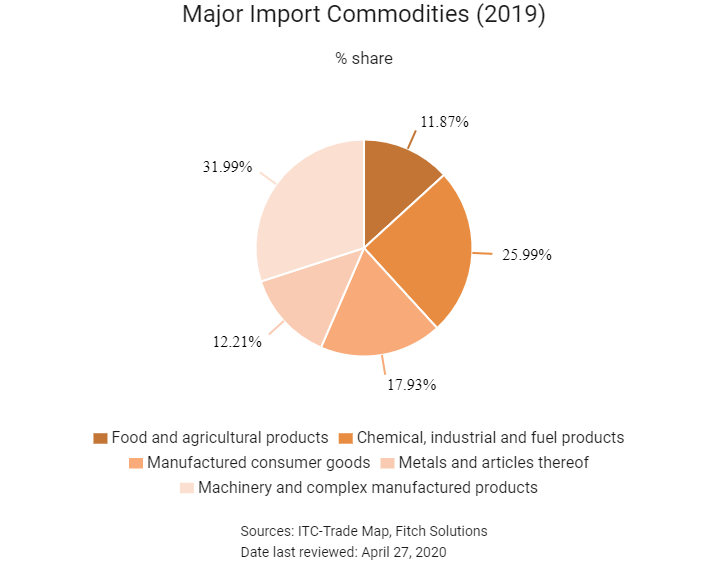 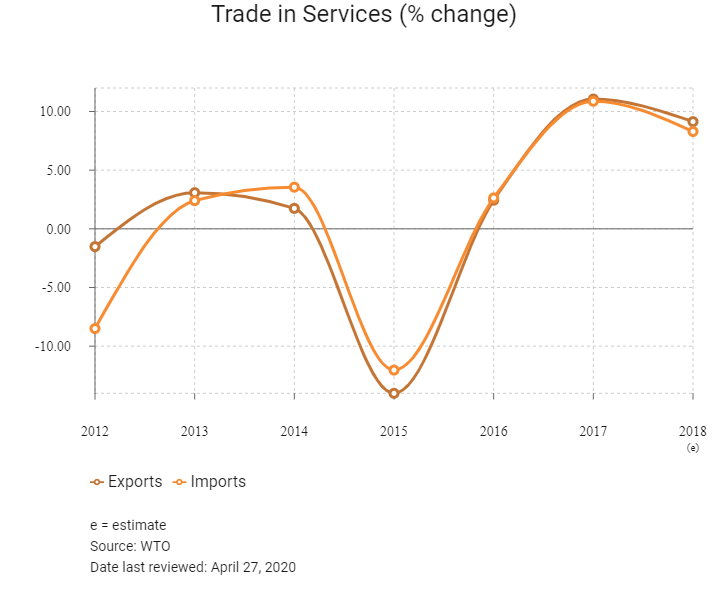 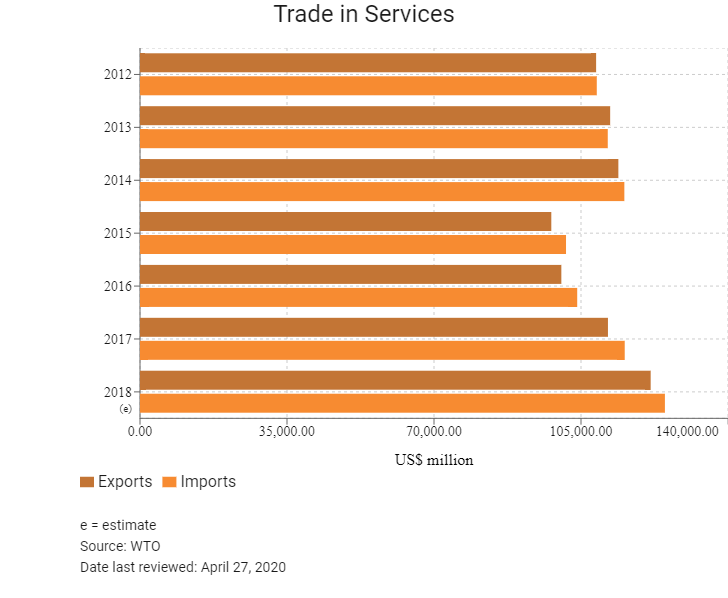 As a member of the EU, Italy is party to the same trade agreements as its 26 peer states. The region negotiates and enters into trade agreements as a collective owing to the single-market nature of the union. In total, the EU has approximately 70 preferential trade agreements in place. It is expected that membership of the eurozone will lead to further convergence towards EU economic policymaking norms. 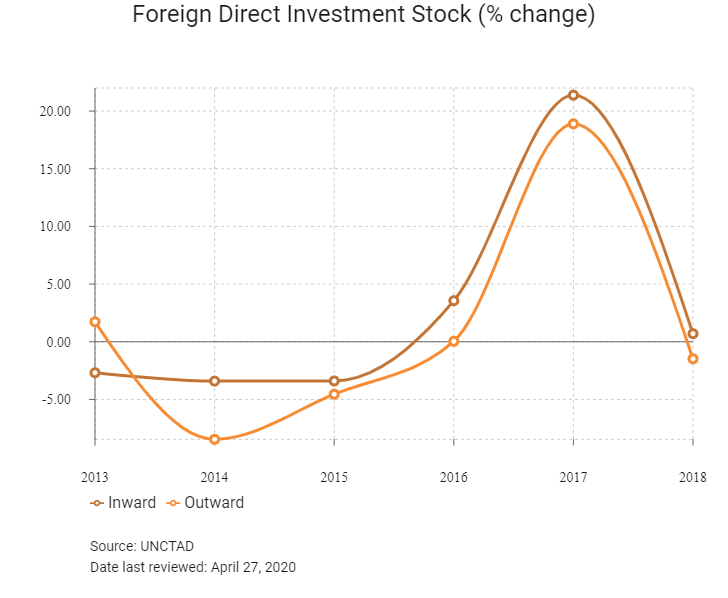 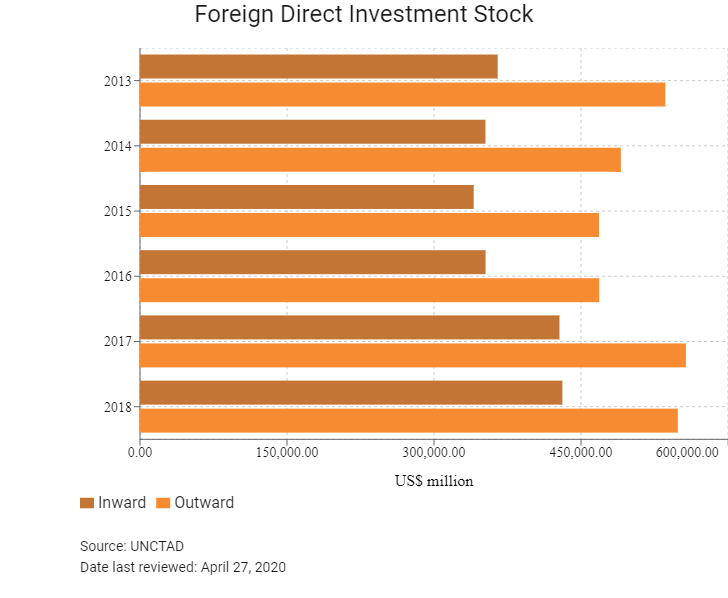 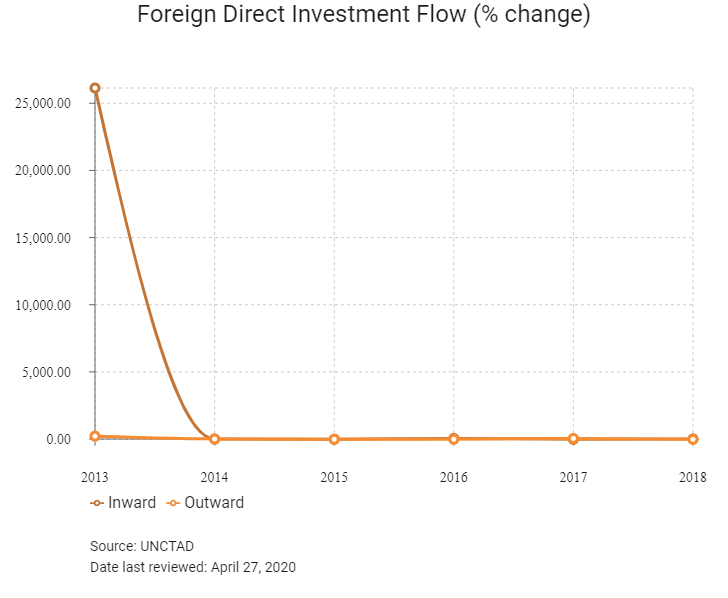 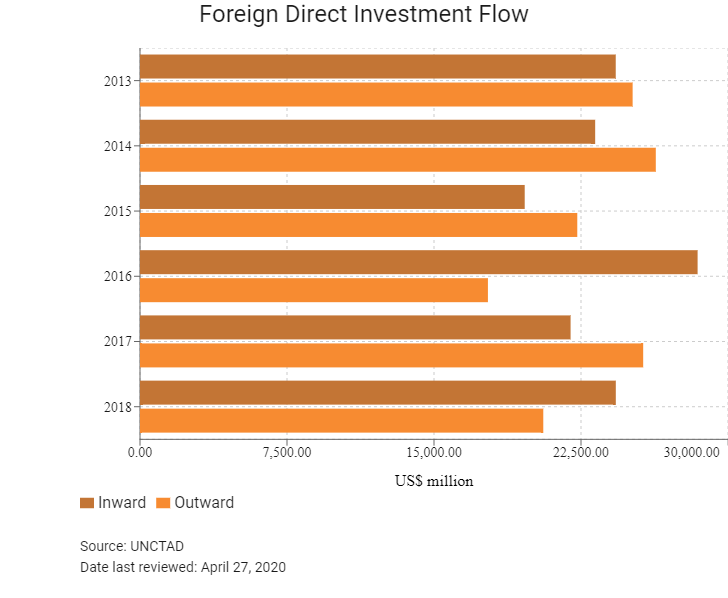 Non-EU member citizens require a work permit in order to work in the country; EU member citizens do not require a work permit, but their employer must inform the local Labour Immigration Office about their employment. Once the permit has been obtained by the employer, within four months the would-be employee must apply for the work visa at the consulate where they live. If the work visa is granted (approval usually takes place within 30 days), the employee has six months to collect it. The employee must sign anemployment contract at the Labour Immigration Office within eight days of their arrival in Italy. Citizens of the EEA (the EU member states plus Iceland, Norway and Lichtenstein) and Switzerland do not require a visa to enter, reside and work in Italy. No work permit is needed by foreigners from outside the EU if they have a permanent residence or family reunion permit, have been granted asylum, study in Italy or have a Blue Card.

Employers must first apply for a permit to hire foreign workers. A permit is granted once no suitable candidate can be found in Italy or in other EU member states. The vacant position must be reported to the local district labour office and cannot be changed at a later stage to fit the profile of a potential employee. The candidate must then apply for a work permit. The government issues the permit for a maximum of two years, which can be repeatedly prolonged but always for a maximum of two years, and may be renewed as many times as needed. The permit process takes an average of one month. In April 2019, Italy published its 2019 Immigration Quota Decree, issued annually, which allows non-EU nationals who qualify to obtain a work permit. The total quota level for 2019 was 30,850 permits allocated among three categories: non-seasonal workers (3,000 permits), conversion of existing permits (9,850 permits) and seasonal workers (18,000 permits). Employers were instructed to evaluate their need for work permits for non-EU nationals in the appropriate categories and apply as soon as possible. As of May 8 the 2020 level had not yet been announced.

The Blue Card is intended for a highly qualified employee. A foreigner holding a Blue Card may reside in Italy and work in the job for which the card was issued or change that job under the conditions defined. A high qualification means a duly completed university education or higher professional education which has lasted for at least three years. Alternatively, a minimum of five years' relevant professional experience relating to the activity for which the work permit is being granted is required. The Blue Card is issued with a term of validity three months longer than the term for which the employment contract has been concluded, for a maximum period of two years. The Blue Card can be extended. One of the conditions for issuing the card is a wage criterion – the employment contract must stipulate a gross monthly or yearly wage that is at least 1.5 times the gross average annual wage.

These can be granted by the embassy on application for a maximum period of 90 days and must be used within 180 days. The visa must be for the purpose of employment and the application must be submitted along with general requirements, such as a work permit, an employment contract and proof of securing accommodation.

Italy is one of 26 countries in the Schengen Area, which means that there is one common visa and no border controls. All non-EU, EEA and Swiss nationals who wish to stay in Italy for longer than 90 days need to apply for a long-term visa.

ECONOMIC RISK
Despite its challenges, Italy remains among the world's top 10 largest economies, with a comparative advantage in a number of areas, including industrial design and innovation, fashion, and clothing. Relative to some other eurozone economies, Italy did not utilise the global financial crisis and eurozone debt crisis to expedite the enactment of structural reforms aimed at addressing the country's cumbersome operating environment, massive public debt load and long-term decline in productivity growth. Italy remains firmly on a low growth trajectory, and the domestic political situation will ensure that progress tackling Italy's long-standing competitiveness issues remains sluggish at best in the coming years. Italy's business environment remains bogged down by bureaucratic inefficiencies and structural rigidities, which impede competition and investment and weigh on external competitiveness. The public debt pile is expected to remain a significant weight on the economy and the need to stimulate the economy has seldom been greater in the wake of the shock caused by shutting down activity in response to the Covid-19 pandemic, making technical recession inevitable and presenting the government with some major macroeconomic challenges because the government has limited capacity to provide fiscal stimulus to the economy.

OPERATIONAL RISK
The government remains open to foreign investment in shares of Italian companies – albeit with a temporarily expanded Golden Power Law in response to the economic shock caused by the Covid-19 pandemic – and continues to make information available online to prospective investors. Italy's economy is struggling to emerge from its longest recession in recent history, and the current government has been making slow progress on improving Italy's investment climate. However, comprehensive reforms of the labour market, the education system, competition policy and a general simplification of bureaucracy could induce a reversal of trend in the brain drain that has characterised the country over the past 30 years. Although Italy's manufacturing sector has suffered owing to competition from Mainland China and other low-cost centres, the country has the human capital and capital resources to move higher up the value-added chain. Doing so would open up new markets, especially in emerging countries. 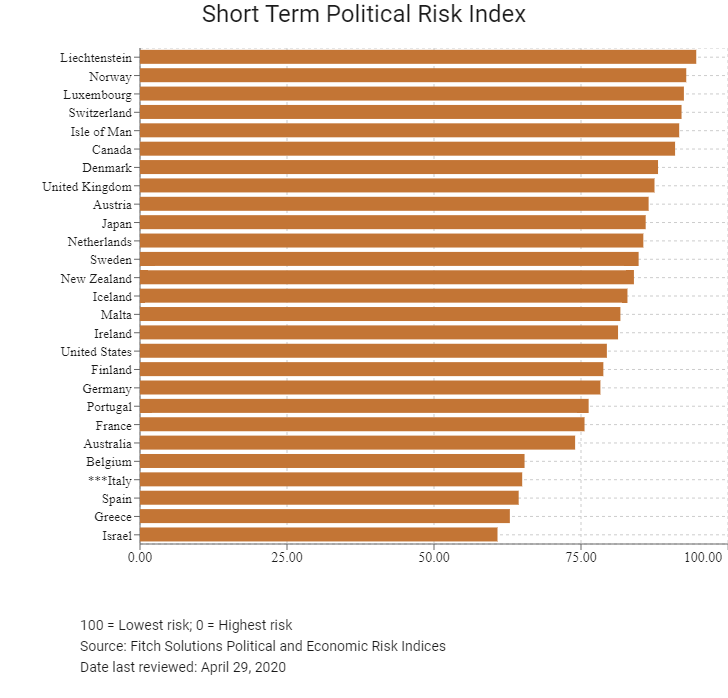 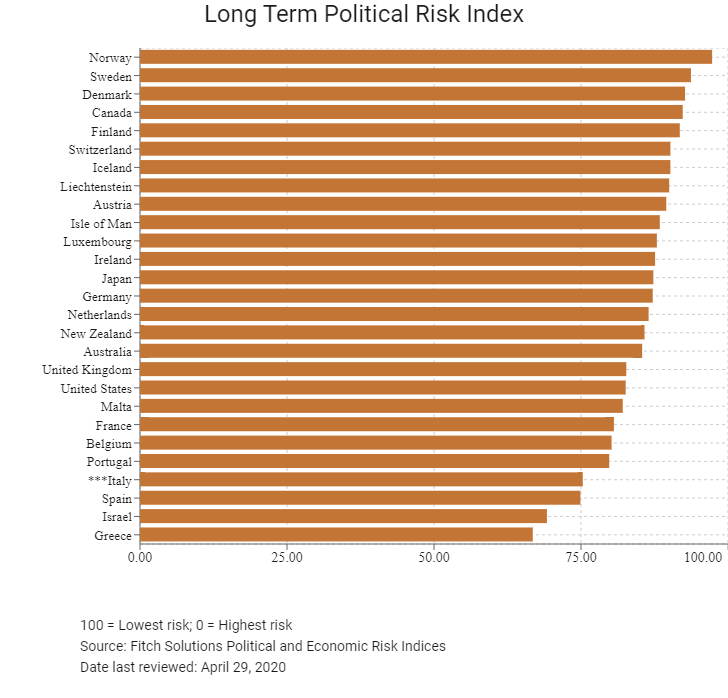 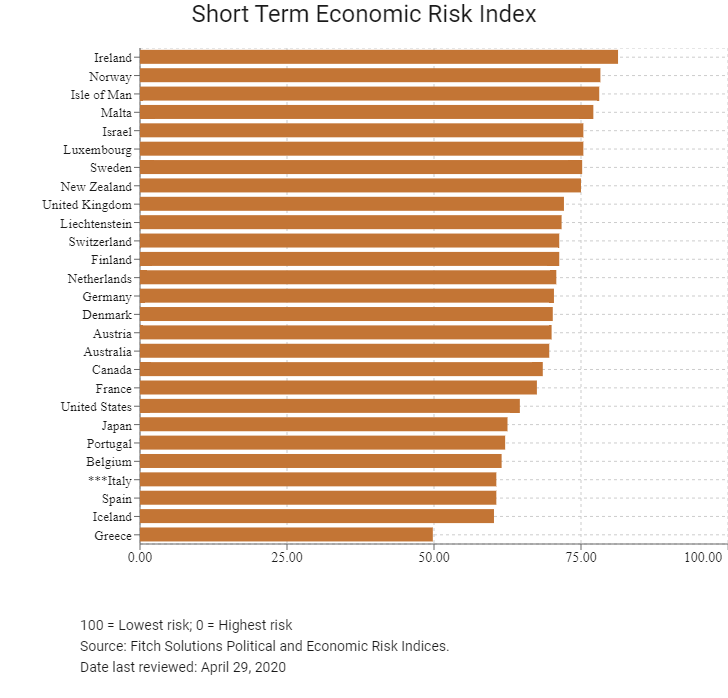 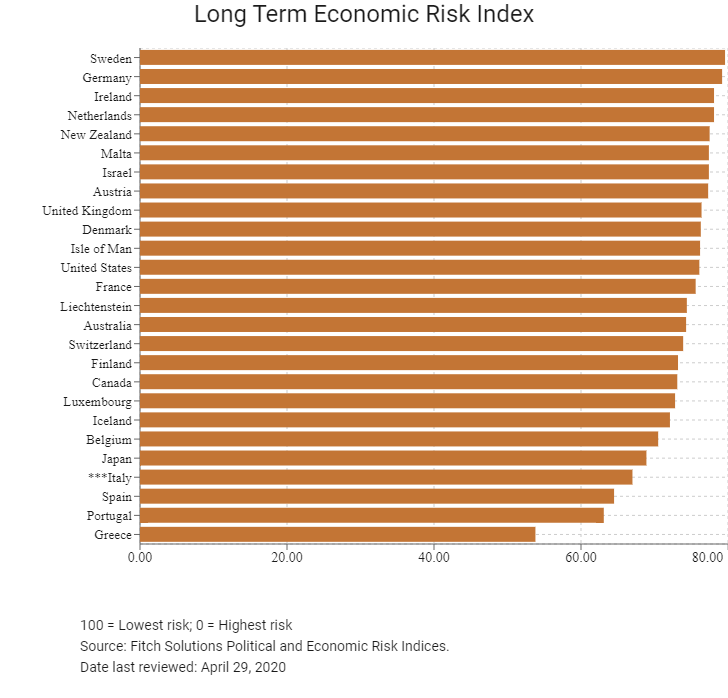 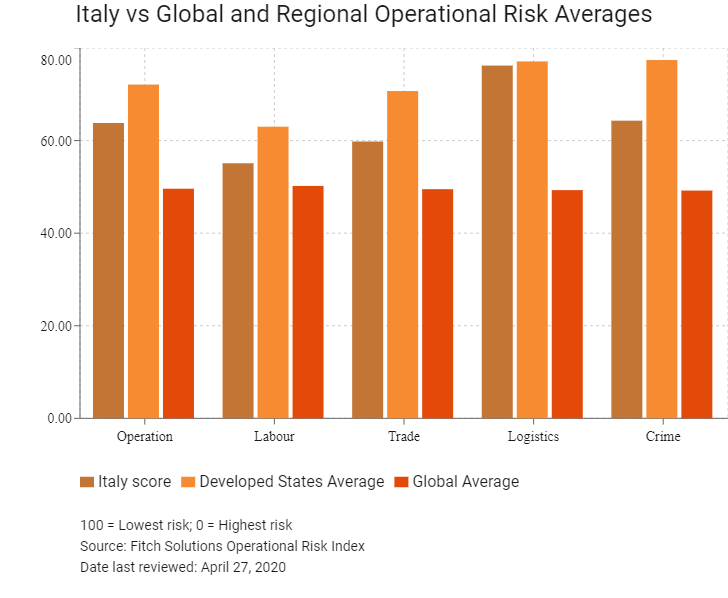 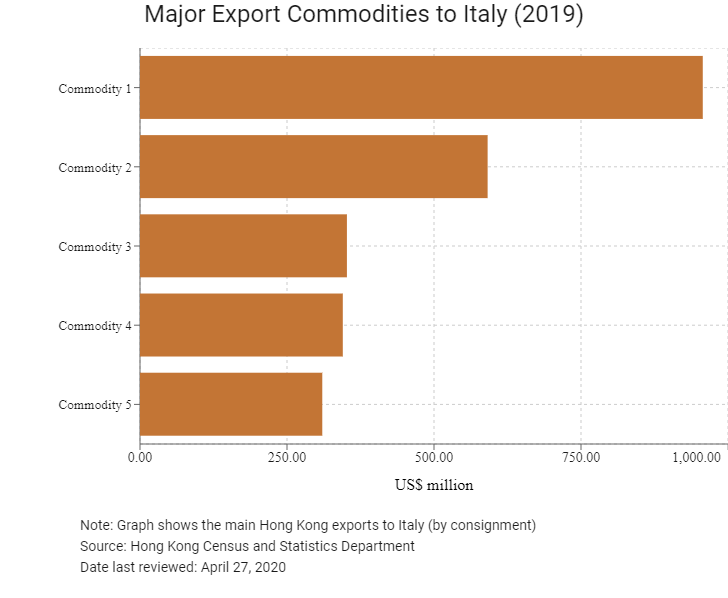 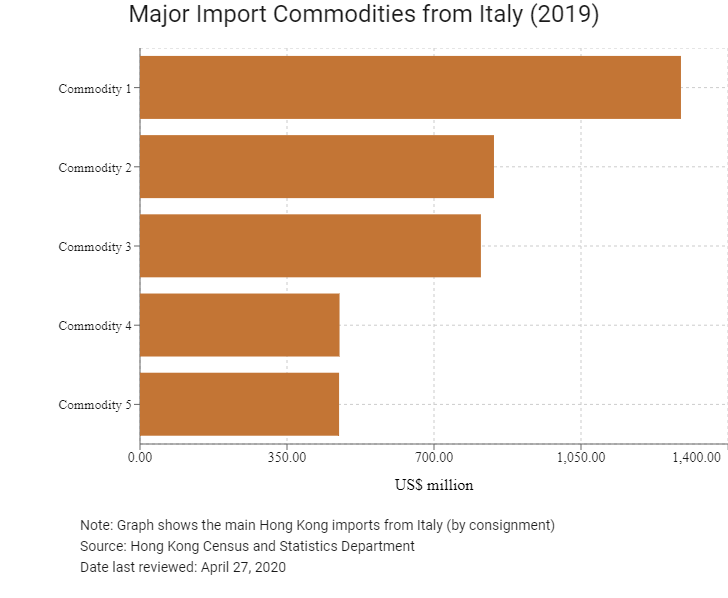 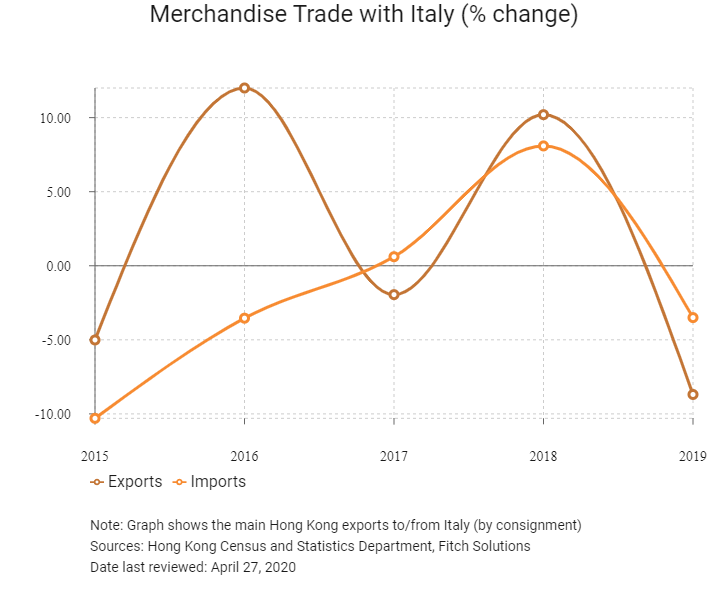 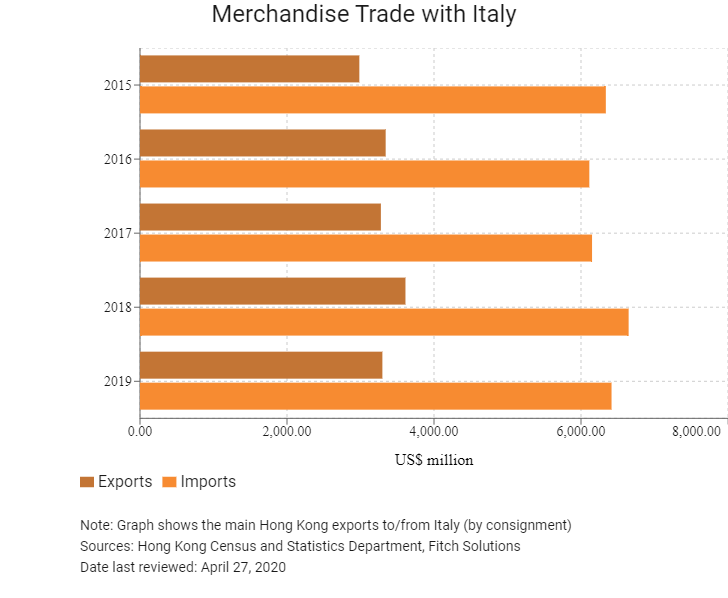 Treaties and agreements between Hong Kong, Mainland China and Italy

Source: Italian Chamber of Commerce in Hong Kong and Macau

HKSAR passport holders do not need a visa to the Schengen area for a stay up to 90 days in any 180-day period. For information on the stay period in the Schengen area, please visit the European Commission website.