Iraq's economy is dominated by the oil sector, which provides more than 90% of government revenue and 80% of foreign exchange earnings. While Iraq's recent contracts with major oil companies have the potential to greatly expand oil revenues, the country will need to upgrade its refinery and export infrastructure to enable these deals to reach their potential. Following the reclamation of Iraqi territory from Islamic State (IS) in December 2017, the Government of Iraq is putting in place a comprehensive reconstruction package linking immediate stabilisation to a long-term vision and initiating a recovery and reconstruction process. That said, sustained increases in the standard of living of Iraq still depend on the government passing major policy reforms, improving the internal security profile and developing Iraq's massive oil reserves.

March 2019
The Pearl Petroleum consortium, led by United Arab Emirates-based Dana Gas, committed to investing AED2.6 billion in order to expand Kurdistan's Khor Mor gas complex under a 20-year sales deal with the Kurdistan Regional Government for the Kurdistan Gas Project. Expansion works would include the construction of two production trains at Khor Mor and drilling wells to boost production capacity by 63%.

China Petroleum Engineering and Construction Corporation signed a contract with Basra Gas Company (BGC) to build a natural gas liquids (NGL) plant in southern Iraq. The NGL facility would be built in the Ar Ratawi area in the province of Basra. The facility would boost BGC's current gas production capacity by 40%. The plant, scheduled to be completed at the end of 2020, would also reduce gas flaring and increase BGC's dry gas supply and NGL export capabilities.

June 2019
The Japan International Cooperation Agency (JICA) signed an official development assistance loan agreement with Iraq to provide up to JPY110 billion (equivalent to over USD1 billion) for the Basrah Refinery Upgrading Project (II). The project included the installation of a new fluid catalytic cracking complex in the refinery. Japanese technology would be used in the project. The scheme, to be implemented by Iraqi Ministry of Oil, aimed to boost the quality and productivity of petroleum products, reduce the supply-demand gap, decrease the environmental load and transfer related technologies between Japan and Iraq. The new complex was scheduled to start commercial operations in April 2024.

August 2019
Construction Third Engineering Bureau Co signed a construction contract with Iraq to carry out various civil engineering and infrastructure projects in the south of the country. Under the USD1.4 billion contract, the firm would build housing, education and medical care centres, a visitors' serving complex, and ancillary facility projects in the Najaf, Karbala and Basra governorates. The projects would be completed over a period of three years.

The 32km Shalamcheh-Basra railway project connecting Iran and Iraq would begin in the coming months and would be completed within a year. A 700m movable bridge would also be built over the Arvand River as part of the Shalamcheh-Basra project. The project would effectively link the Iranian cities of Khorramshahr and Abadan along with the Imam Khomeini Port to the Iraqi city. Iran's Mostazafan Foundation was set to fund the project as the Iranian party of the agreement. The project was part of Iran, Iraq and Syria's efforts to expand transportation cooperation among the three countries. It would link Iran to Syria via Iraq. Iran was waiting for the Iraqi side to assign the land needed for the implementation.

September 2019
Iraq's president Barham Salih pledged that his office would draft a new electoral law and overhaul the country's election commission. The president stated that if the new electoral law was passed by parliament, he would agree to early elections. Iraq signed a deal with Gulf Cooperation Council Interconnection Authority (GCCIA) for the construction of a 300km transmission line that would run from Kuwait to Al Faw Port in Iraq. The construction work would require an investment of around USD220 million, which would be provided by GCC. The transmission line was expected to import 500MW of power from Gulf countries to Iraq's grid by 2020.

February 2020
The government of Iraq, under assistance from a joint fund with Mainland China, planned to execute development projects in Kurdistan. The schemes included construction of an oil refinery, a railway line connecting Zakho city in Kurdistan with the Southern port of Basra, an oil pipeline as well as schools and hospitals. The schemes, which would be executed by Mainland Chinese firms, are part of an oil-for-project agreement signed between Iraq and Mainland China in September 2019.

Iraq's Faw Grant Port was expected to be completed by 2023. A major part of the scheme in South Iraq was completed in 2019 and new contracts include additional wharfs as well as roads and rail networks connecting the port with the Southern Basra oil hub and other cities. The final stages of the USD3.3 billion project would be financed via annual state budgets and a new oil-for-projects fund agreement signed with Mainland China in September 2019. The port, which would have a 39km container quay and 2km of berths along with a container warehouse and hinterland covering more than 1sq km, would be able to handle 99 million tonnes of cargo each year.

Iraq was set to sign a deal with France-based Alstom and South Korea's Hyundai for the elevated Baghdad Metro project in the country. The proposed rapid transit network runs between Baghdad Central Station and Dora. Phase 1 of the project, to cost nearly IQD3 trillion (USD2.5 billion), involved construction of 21km railway and 14 stations. To be executed in stages, the first phase was expected to be launched in 2020. Nearly 15% of the project would be funded by Iraq while the remaining would be financed by an oil-for-project fund created by Iraq and Mainland China.

April 2020
The Government of Iraq postponed the bid submission deadline for five road and bridge projects due to the Covid-19 pandemic. The projects include the reconstruction and rehabilitation of two bridges in Mosul and major roads in Diayla in East Iraq and Saladin. Tenders for the World Bank-funded projects opened in early March.

May 2020
To support the Ministry of Health's efforts to fight the Covid-19 pandemic, the Central Bank of Iraq (CBI) established a fund to collect donations from financial institutions with initial donations of USD20 million from the CBI itself and USD5 million from the Trade Bank of Iraq. The authorities have reduced spending in non-essential areas and have safeguarded budgetary allocations to the Ministry of Health. The Supreme Committee for Health and National Safety was introducing a cash transfer scheme, targeting workers in the private sector that do not receive salaries or benefits from the government. Each eligible individual is expected to receive DIN30,000 each month, with an expected cost of around DIN600 billion over two months.

On May 6 Iraqi lawmakers approved President Barham Salih’s nomination of former intelligence chief Mostafa al-Khadimi to the post of prime minister. The majority of Salih’s ministerial nominees were also confirmed on the same day. 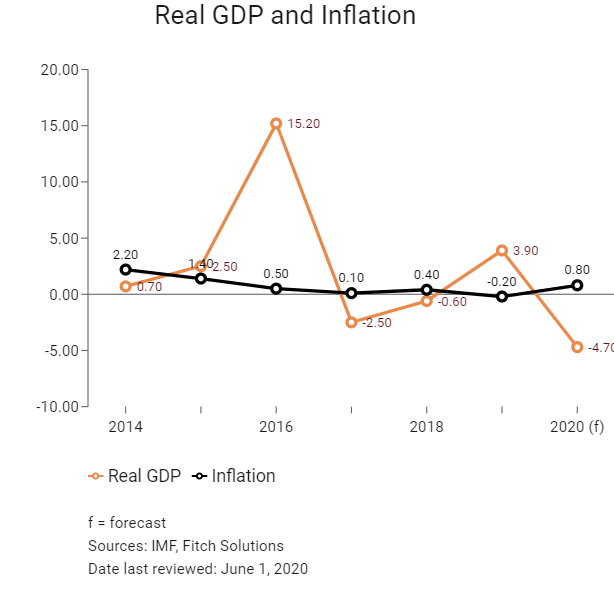 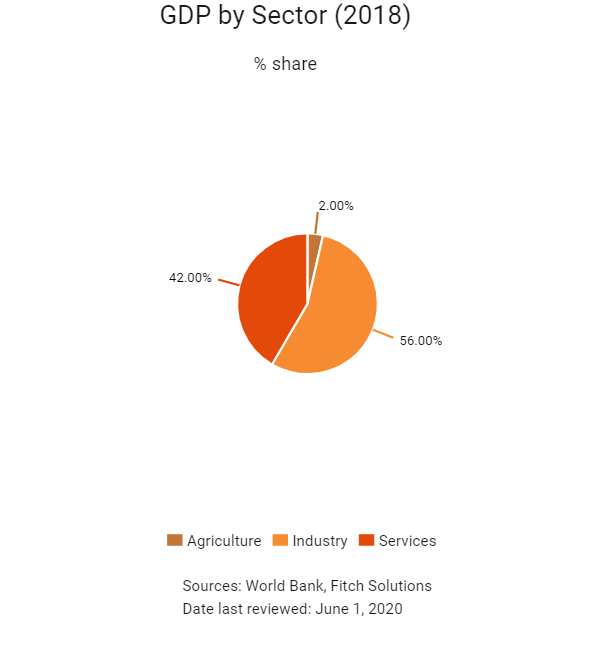 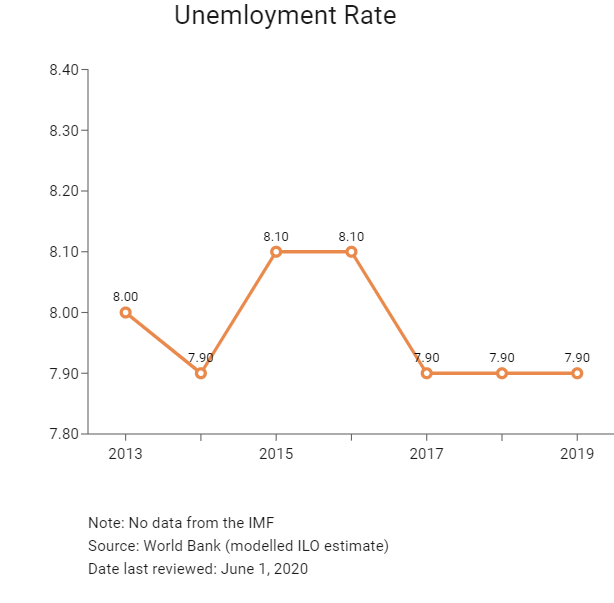 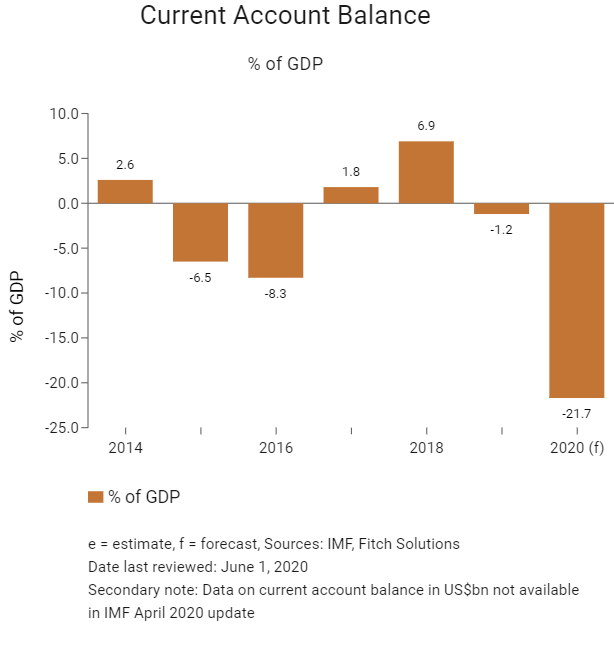 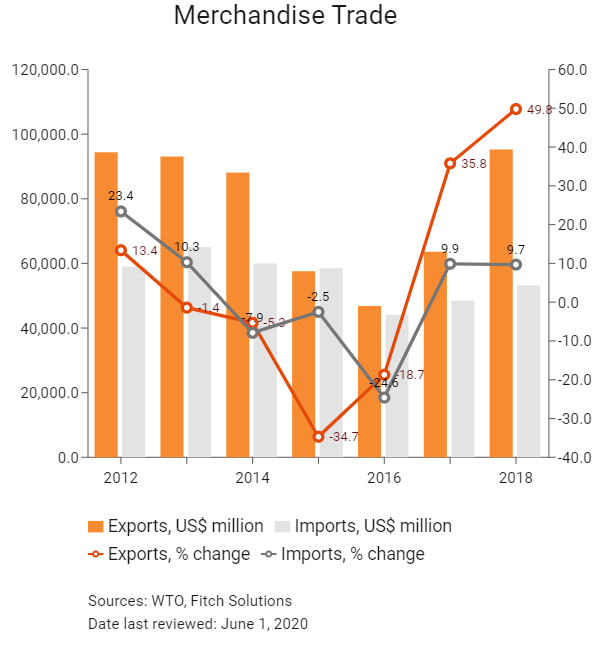 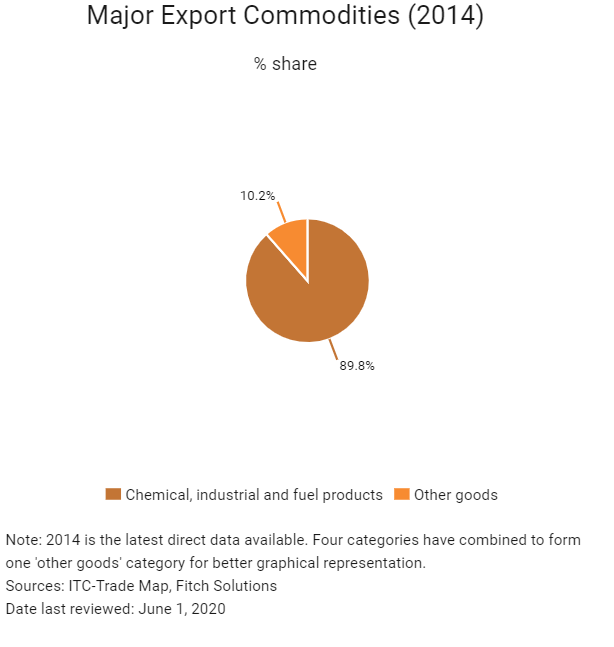 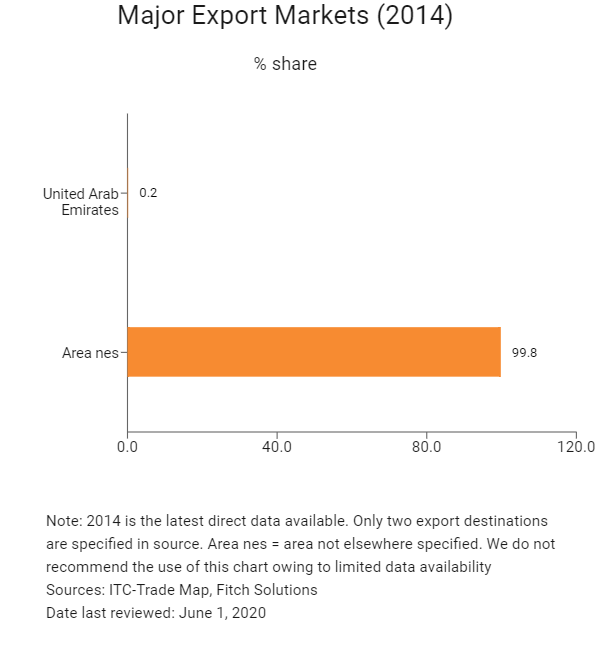 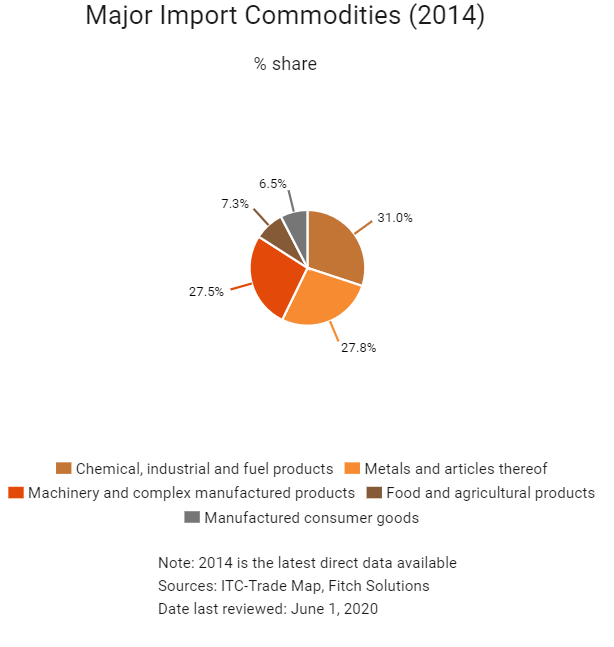 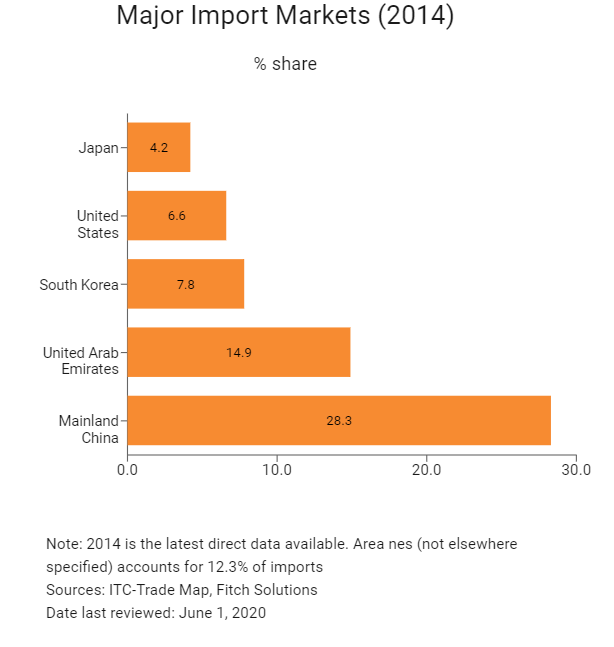 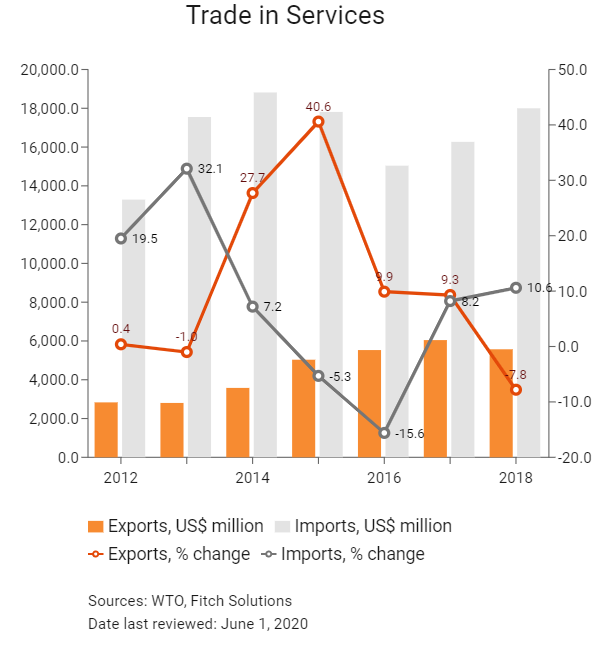 In January 2019 Iraq and Iran announced intentions to sign a zero-tariff trade agreement. Iraq faces fears of potential sanctions from the United States. However, on February 12, 2020, the United States granted Iraq a 45-day sanction waiver, on condition that Iraq provide a timeline detailing a plan to reduce its dependence on Iranian gas. Iraq remains dependent on Iranian gas and electricity, making any zero-tariff agreement a potential boon for Baghdad going forward. 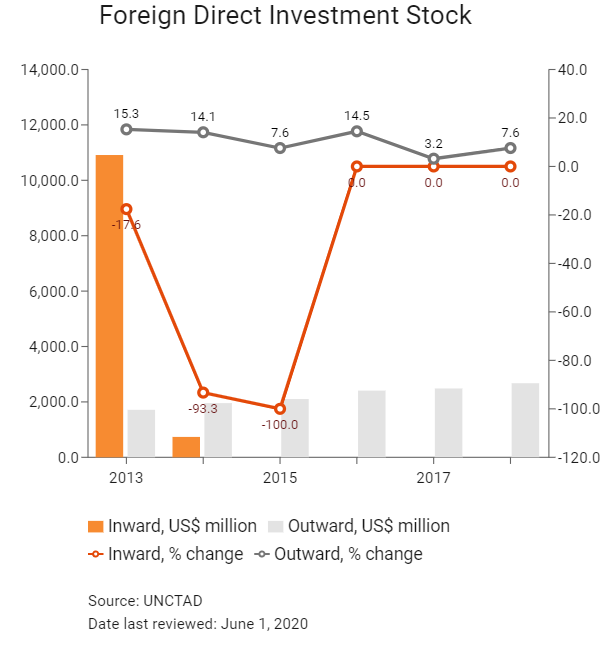 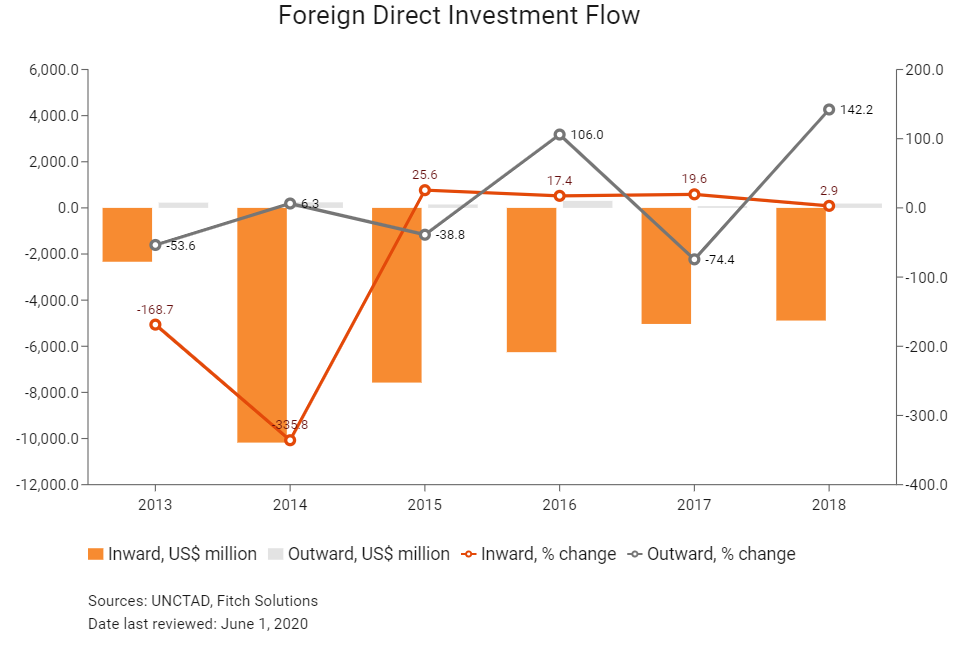 An employee must complete a blood test on entry to Iraq, and the employer must submit an application for a work permit to the relevant government authority with which they are normally affiliated – for example, the Ministry of Oil. The lack of centralised or streamlined application procedures for work permits, which are normally processed through a labour or immigration ministry, means that the process is often slow and mired in bureaucratic inefficiency, with companies experiencing long delays when attempting to obtain residency permits.

Although priority for employment is awarded to Iraqi nationals by law, in practice the shortage of high-skilled labour means that there are limited legal obstacles to bringing in foreign workers.

Employers are obligated to pay high insurance premiums for foreign staff and may be required to offer substantial hardship and danger pay premiums.

ECONOMIC RISK
Iraq remains heavily reliant on its hydrocarbons sector – which accounts for nine-tenths of both fiscal and current account revenues as well as just under two-thirds of total GDP – leaving it exposed to fluctuations in oil prices. Iraq will enter into a recession in 2020 owing to the oil price collapse. This coupled with Covid-19-related travel disruptions and popular protests – will weigh heavily on business confidence and non-oil activity in the quarters ahead.

OPERATIONAL RISK
Iraq is highly dependent on the performance of the oil sector for economic growth. An improvement in the political security environment could also create a platform for stronger efforts to rebuild the country's damaged infrastructure network. That said, the country still faces significant infrastructure gaps, legal risks and security challenges that raise the cost of doing business and will likely take years to resolve. Overall, Iraq remains one of the most risky locations in the world in which to do business. 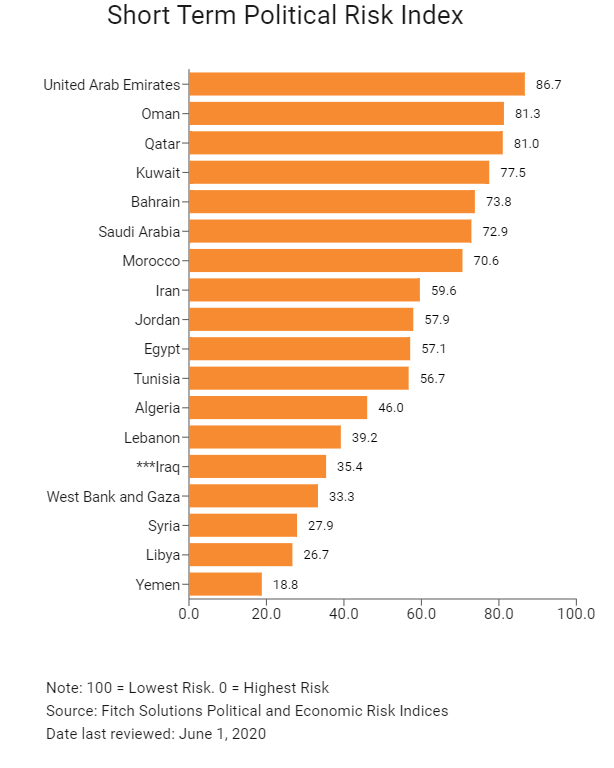 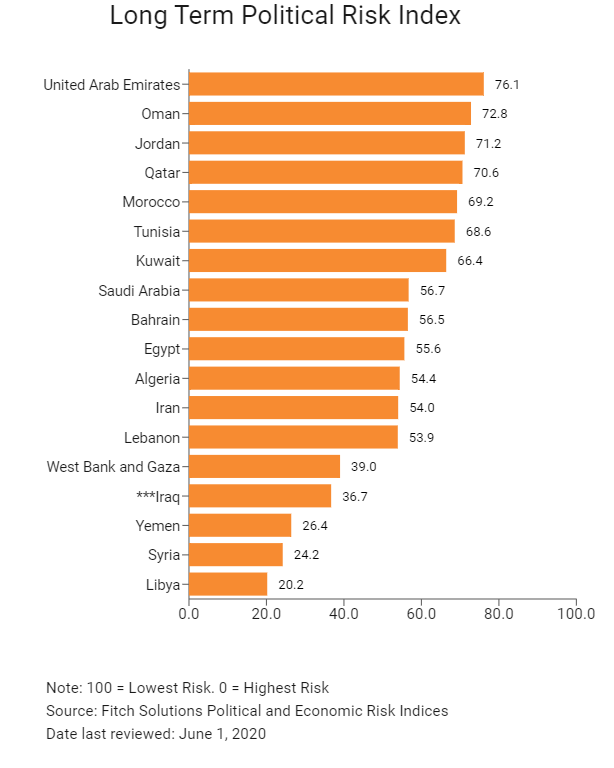 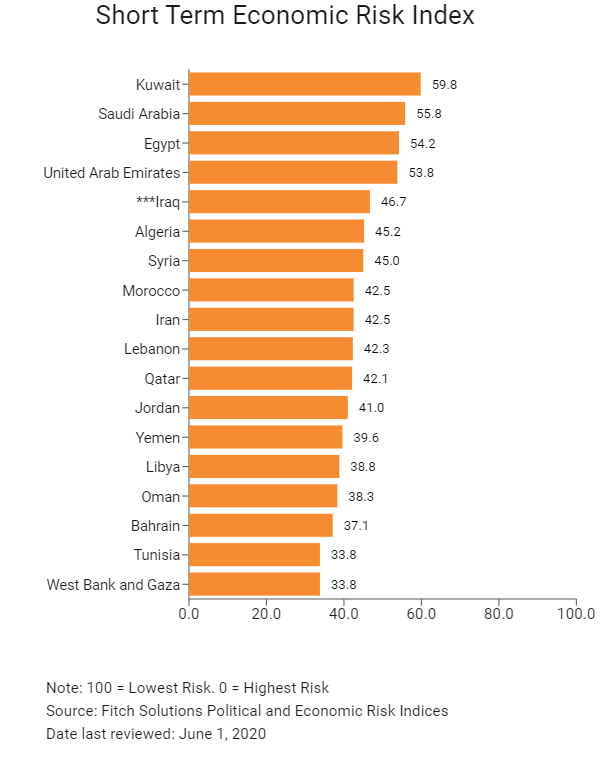 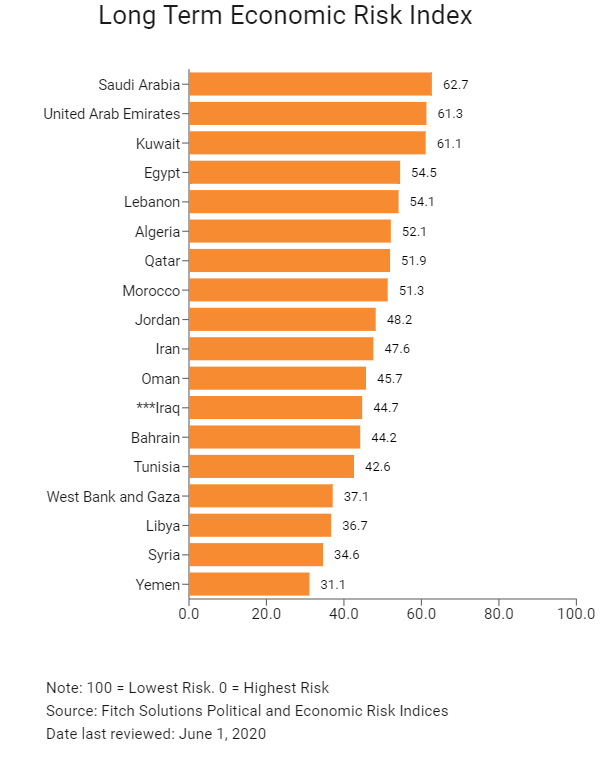 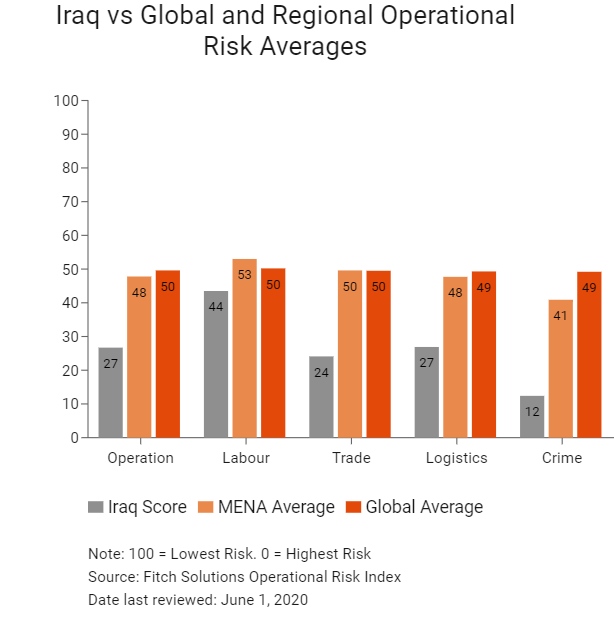 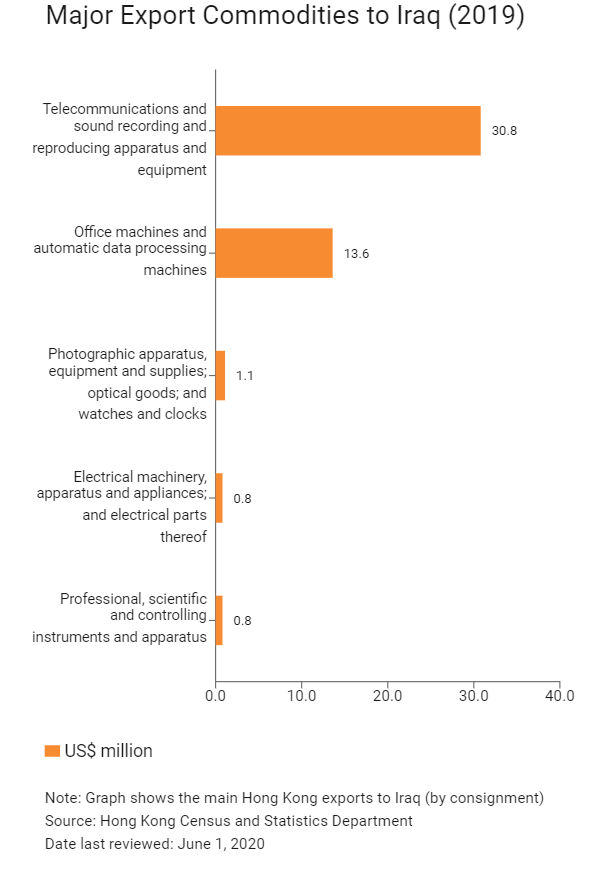 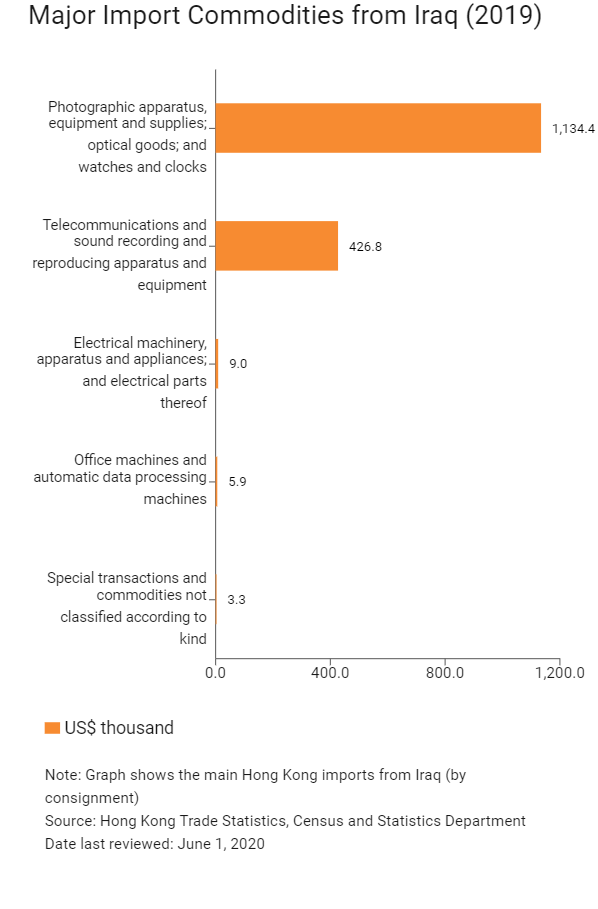 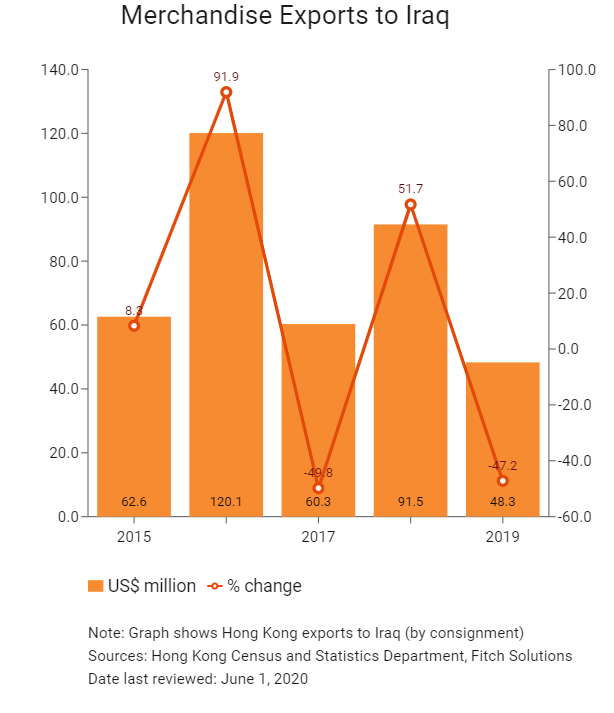 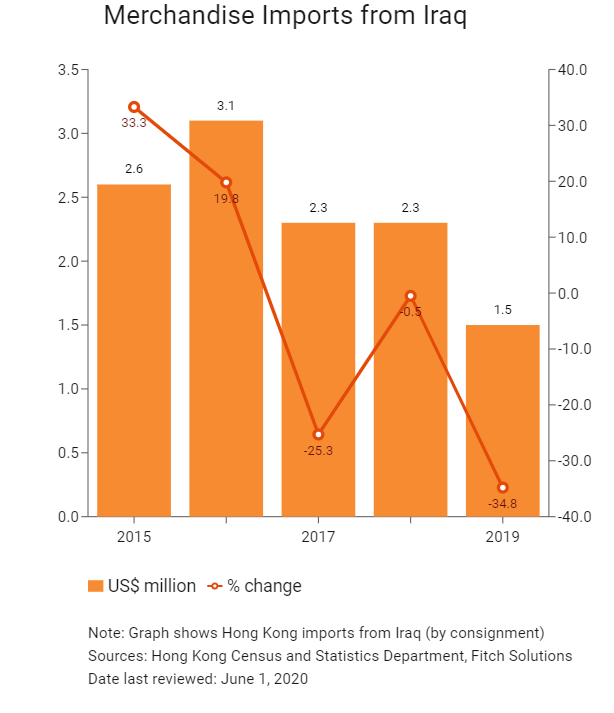 HKSAR passport holders require an Iraqi tourist visa. The tourist visa allows the holder to enter Iraq once during the three months from the date of grant and stay in it for a period of one month, for the purpose of visiting tourist and relic sites.

Visa is not required for holders of a signed and stamped letter issued by the Ministry of Interior of Iraq, provided arriving at Baghdad, Basra or Najaf.

Visa is not required for holders of a signed and stamped letter issued by the Ministry of Interior of the Kurdistan Regional Government, provided arriving at Erbil and Sulaymaniyah.