Estonia's political environment is characterised by consensus among major political parties towards liberal economic policy, conservative fiscal management and European Union (EU) convergence. This has helped to substantially mitigate policy risks through recession, preventing any major breakdown in leadership. In 2020, slower economic growth will be the result of an increasingly challenging external backdrop, amid the Covid-19 outbreak and sluggish eurozone demand. That said, Estonia looks well positioned to cope with a potential slowdown in eurozone growth caused by the pandemic in 2020, as Estonia will continue operating with one of the most solid fiscal profiles of any eurozone country, implying the country has ample firepower to offset the negative effects of the virus on economic activity.

February 2019
The government of Estonia cleared the Rail Infrastructure Fund Action Plan for 2019-2024, which calls for investments worth EUR431 million (USD490.3 million).

March 2019
The opposition Reform Party won the parliamentary election but fell short of a majority and was unable to put together a government.

The proposed high-speed rail-link tunnel between Finland and Estonia received EUR15 billion in funding. The 100km-long tunnel is to run between Helsinki (Finland) and Tallinn (Estonia) under the Gulf of Finland.

April 2019
A coalition between the Centre Party, Pro Patria and the Conservative People's Party was sworn into government on April 29, 2019. Jüri Ratas of the Centre Party remained as prime minister.

The European Investment Bank announced a EUR20 million framework loan to the municipality of Tartu to support its educational development plan for 2018-2025.

May 2019
According to the Digital Life Abroad Report from the online expatriate network InterNations, Estonia was ranked first out of 68 countries in which to live a connected life abroad.

Switzerland-based Larkwater Group announced plans to build Europe's largest methanol plant in Paldiski, which at EUR1 billion will be the biggest-ever industrial investment in Estonia.

September 2019
The government launched a thorough review of the state budget in order to assess whether the current expenditure was justified and taxpayer money is being used as efficiently as possible.

October 2019
The Bank of Estonia issued a press release identifying three factors as having impacted the labour market in 2019: loss of momentum in growth in the economy, loss of competitiveness in the oil shale sector and a large number of foreign workers coming to Estonia for the short term.

Swedbank replaced the top management of its Estonian business following a money laundering incident. In June, the state regulator pledged to tighten controls after a scandal in 2018 involving USD228 billion of suspicious transactions at the Estonian branch of Denmark's largest bank, Danske Bank.

March 2020
The European Commission amended the temporary export licensing requirement imposed on certain personal protective equipment, allowing exports to member countries of the European Free Trade Association and other territories without a licence. On the other hand, an export ban on certain pharmaceutical drugs following the Covid-19 outbreak was imposed.

April 2020
In addressing the socio-economic impact of the Covid-19 health crisis, the parliament approved a supplementary budget, where the government is considering a support package of about EUR2 billion (7% of GDP). The package included support to the Unemployment Insurance Fund to cover for wage reduction (EUR250 million); health insurance fund (EUR213 million); business loans to rural companies through the rural development fund (EUR200 million); guarantees/collateral for bank loans to allow for the rescheduling of payments (EUR1 billion); business loans earmarked for liquidity support to companies (EUR500 million); support to local authorities (EUR130 million); investment loans to companies (EUR50 million); and compensation for the direct costs of cancelled cultural and sporting events (EUR3 million). The government had also suspended payments to the Pillar II pension fund. The government signed an order raising the maximum volume of short-term notes that Estonia can issue by EUR600 million, from EUR400 million previously, bringing the total to EUR1 billion. The government signed a 15-year loan of EUR750 million with the Nordic Investment Bank, and further plans to issue EUR1 billion Eurobonds to finance the increased spending needs due to the Covid-19 pandemic.

April 2020
The European Commission temporary eliminated the value-added tax on imports and import duty on goods needed during the Covid-19 outbreak.

May 2020
Rail Baltic Estonia launched a tender for the design of the Muuga multimodal freight terminal in Estonia. The winning bidder will be responsible for the freight station's design, the terminal connections and the infrastructure directly related, such as a railway tunnel, catenary, traffic control systems, control centre and maintenance depot. The last date for the submission of bids is June 19. Once the Rail Baltica starts operations, the terminal will handle 4-5 million tonnes of goods. 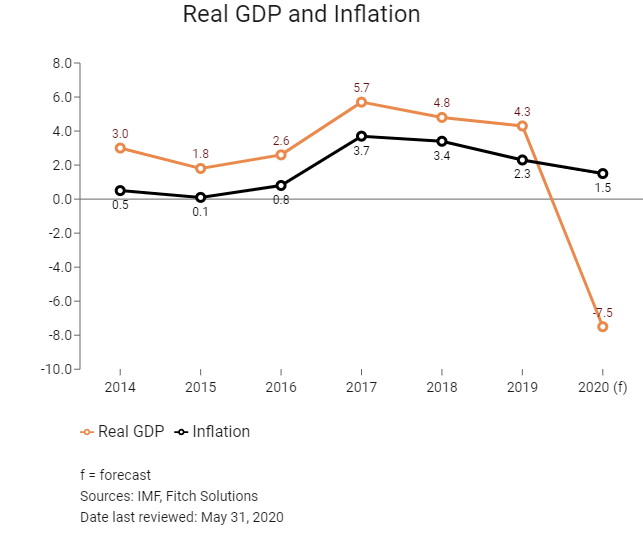 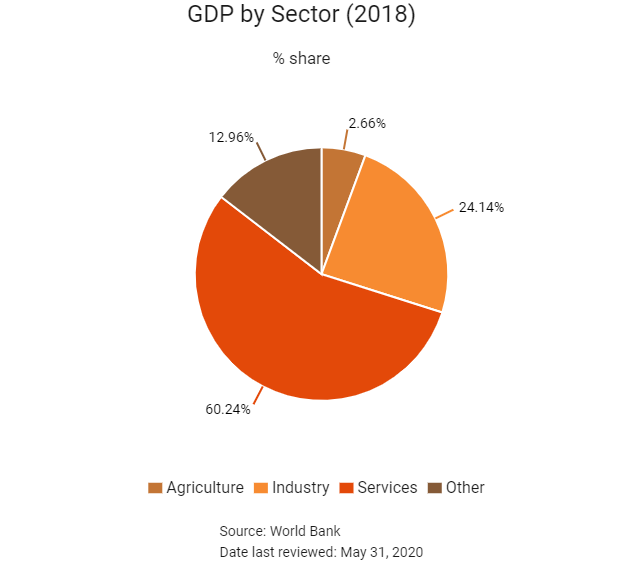 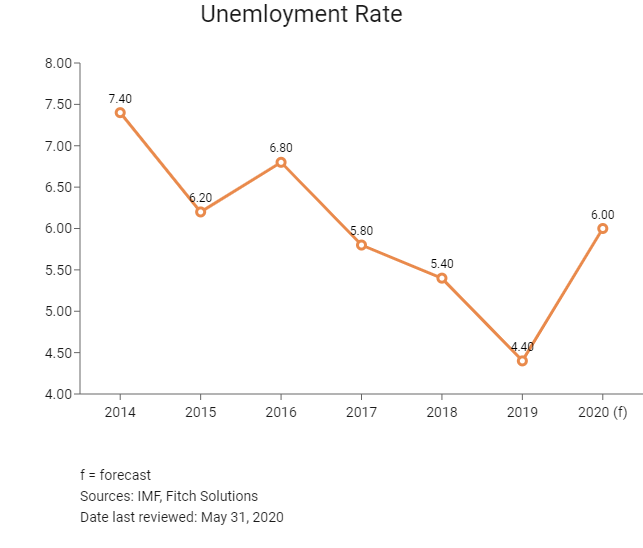 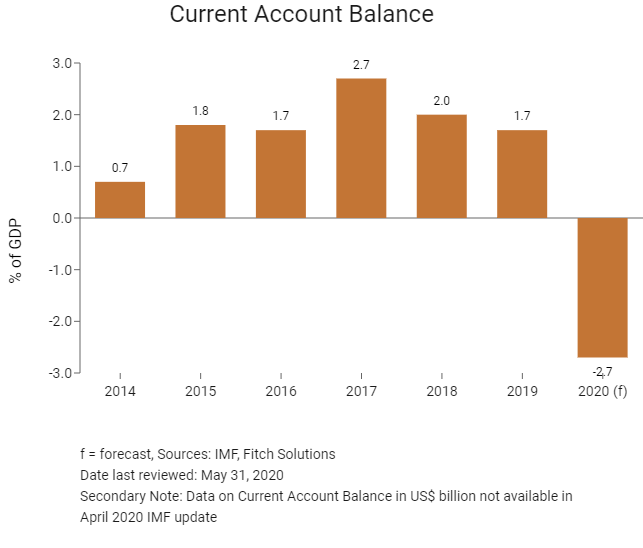 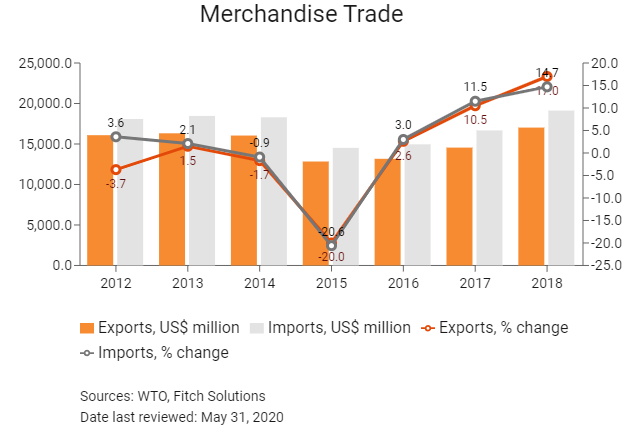 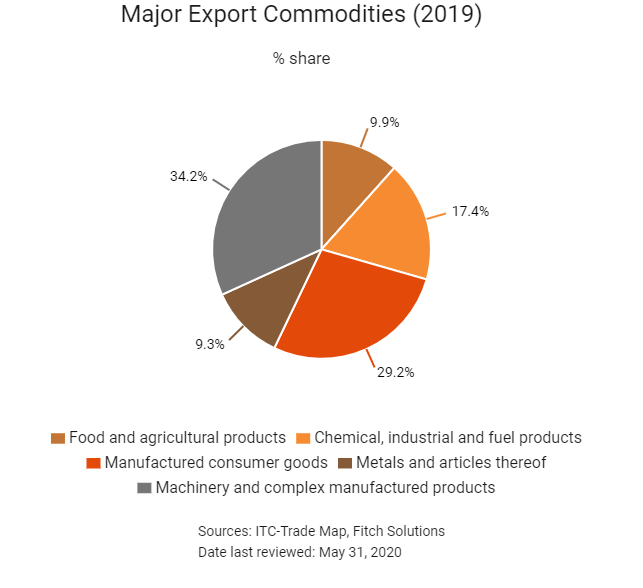 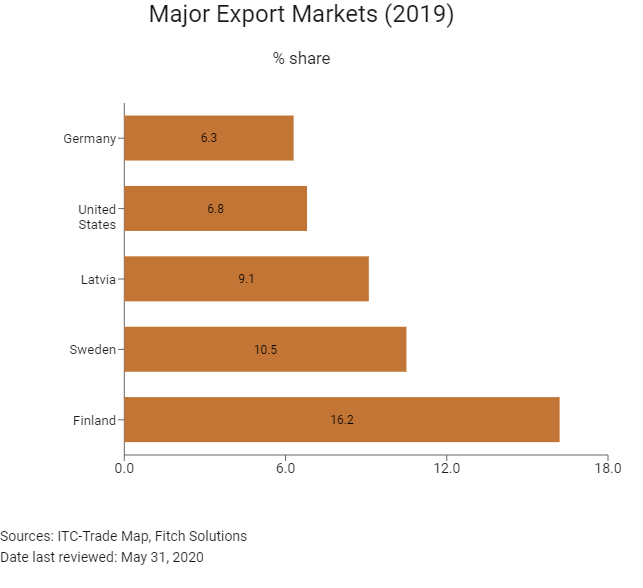 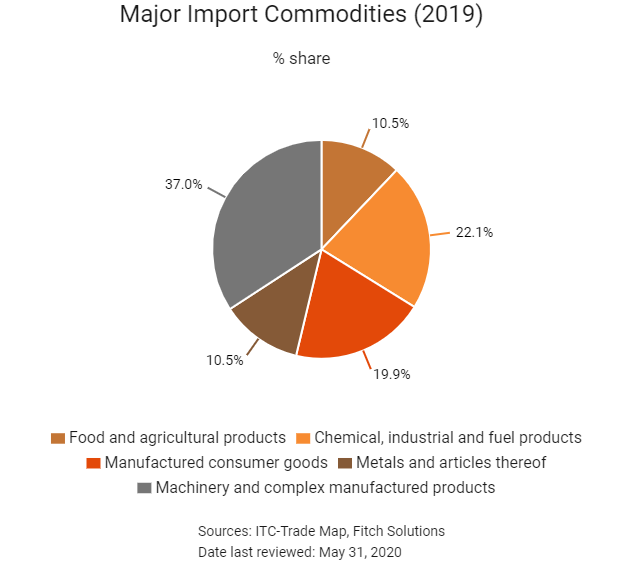 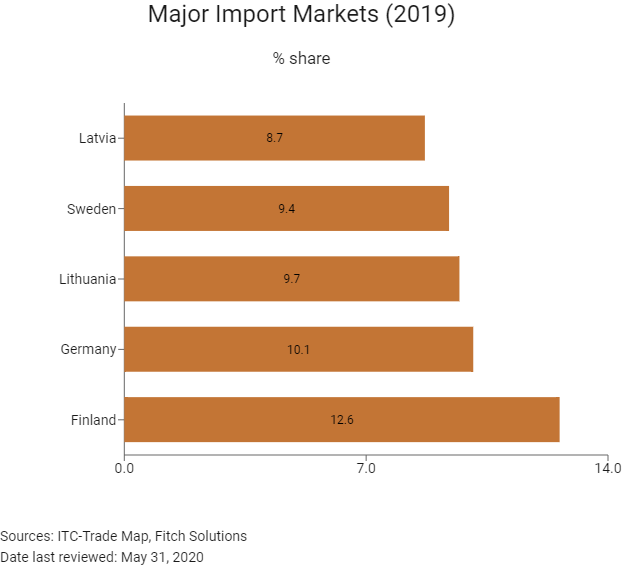 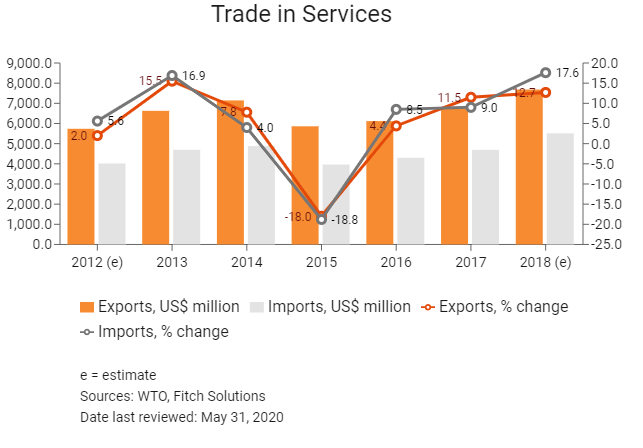 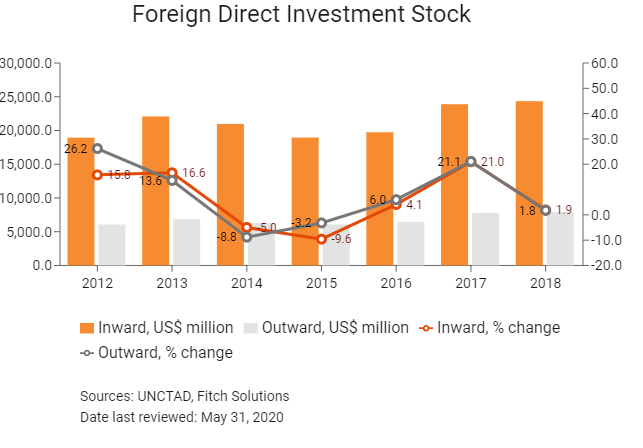 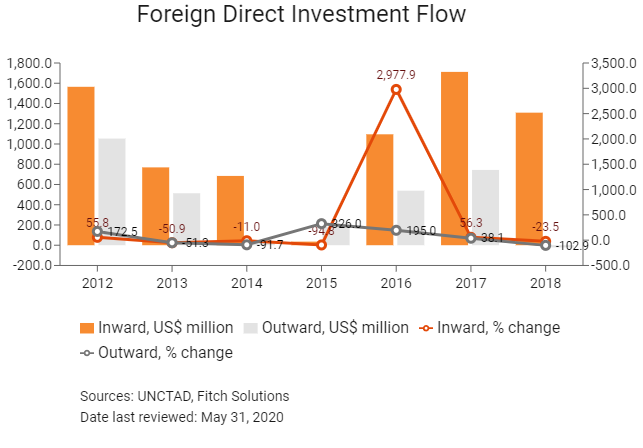 Sources: US Department of Commerce, Invest in Estonia, Fitch Solutions

Source: Ministry of Finance, Estonia, Tax and Customs Board
Date last reviewed: May 31, 2020

EU nationals, citizens of the member states of the EEA and citizens of Switzerland do not require a visa to enter, reside and work in the country. EU citizens can stay in Estonia for up to three months, after which they are required to register their place of residence.

Employers are required to apply for permission from the Estonian Unemployment Insurance Fund to hire foreign workers.

Intended for the stay of a highly qualified employee. A foreigner holding a blue card may reside in the country and work in the job for which the blue card was issued, or change that job under the conditions defined. High qualification means a duly completed university education or higher professional education which has lasted for at least three years. The blue card is issued with the term of validity three months longer than the term for which the employment contract has been concluded, however, for the maximum period of two years. The blue card can be extended. One of the conditions for issuing the blue card is a wage criterion - the employment contract must contain gross monthly or yearly wage at least at the rate of 1.5 multiple of the gross average annual wage.

Permission to hire a foreigner will only be granted by the Unemployment Insurance Fund on the condition that the position cannot be filled by an Estonian citizen, EU citizen or foreign national already living in Estonia.

Estonia is one of 26 countries in the Schengen Area, which means that there is one common visa and no border controls for all nationals of the EU, the EEA or a third country national holding a residence permit of a Schengen state. Other than EU passport holders, Estonia waives visas for 62 other countries globally, including Hong Kong and Macau, but all non-EU/EEA/Swiss nationals who wish to stay for longer than 90 days need to apply for a long-term visa.

ECONOMIC RISK
The economy is expected to shrink significantly in 2020, due to the impact of the Covid-19 pandemic. Contracting investment activity and sliding private consumption are set to erode domestic demand, while a collapse in foreign demand and nosediving tourist arrivals will likely hamper the external sector. A jump in public spending should cushion the overall downturn somewhat, however. . Furthermore, in the medium term, the Estonian economy remains on a path of sustainable growth, although competition in the labour market became tighter during 2019. Although Estonia's rapid recovery from severe recession following the global economic downturn in 2008 was characterised by export-led growth, economic activity will be increasingly driven by domestic demand in the coming years. Estonia will aim to increase its share of global trade on the back of strong competitiveness gains since 2010. In addition to a diversified manufacturing sector, the high value-added services sector will increase its presence in the economy.

OPERATIONAL RISK
While the broad consensus among political parties for responsible economic management and market liberalism is likely to remain in play, the potential for change in policies exists given the new coalition government. 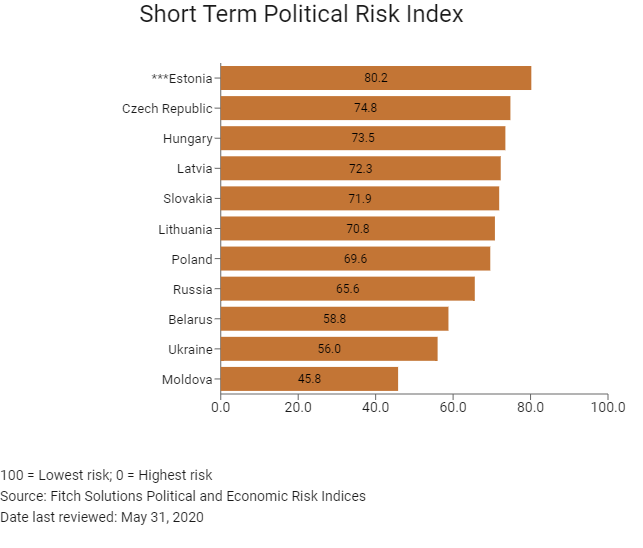 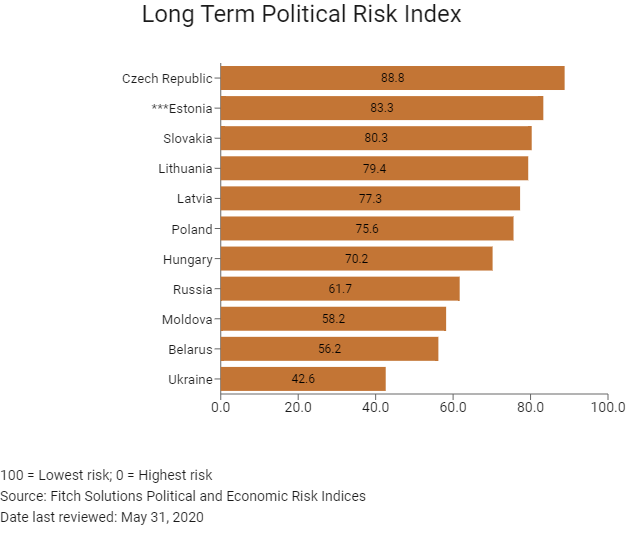 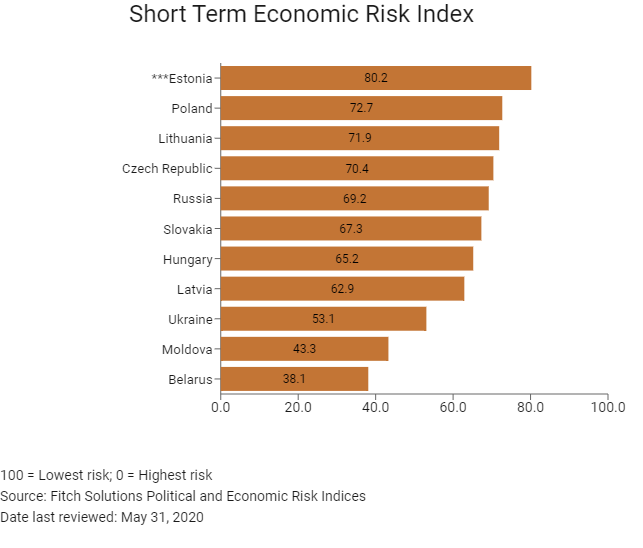 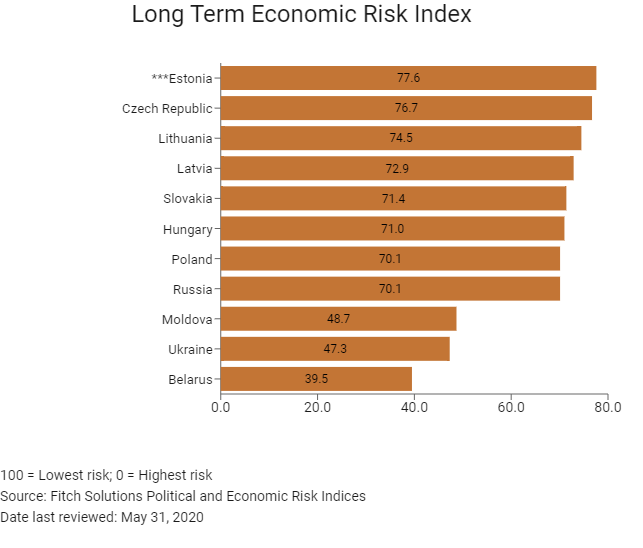 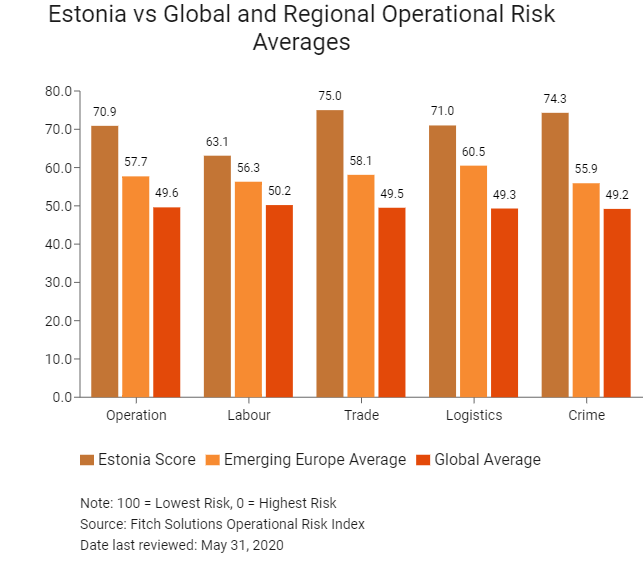 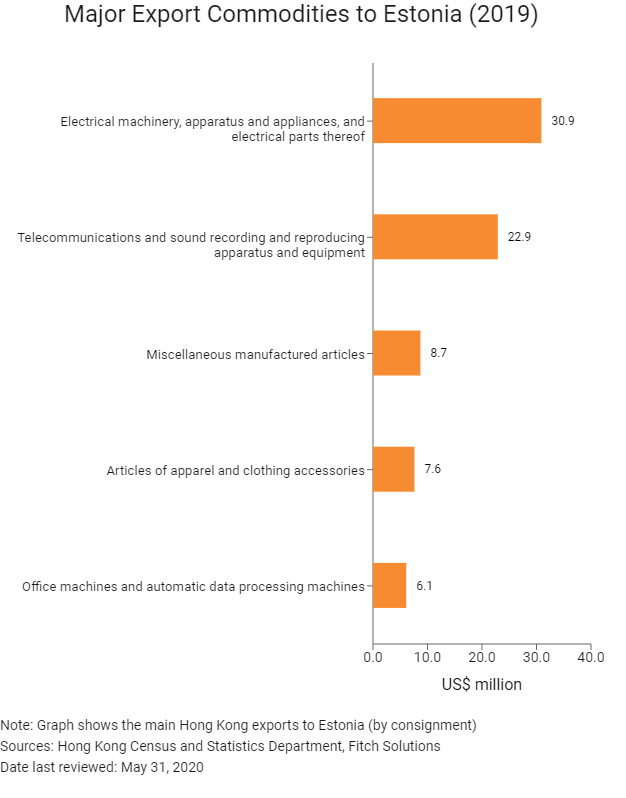 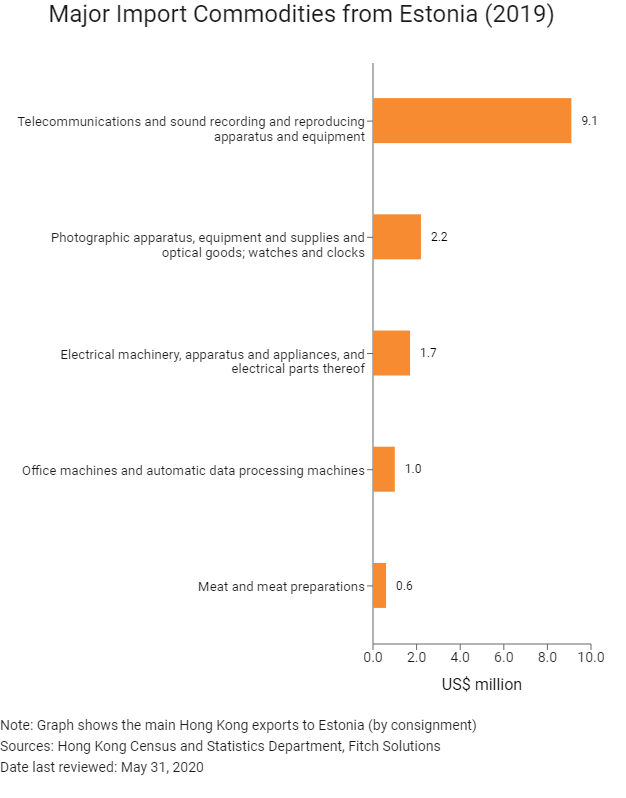 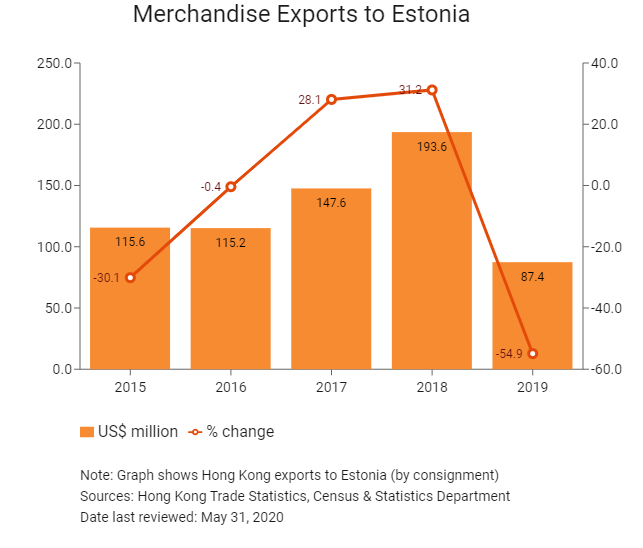 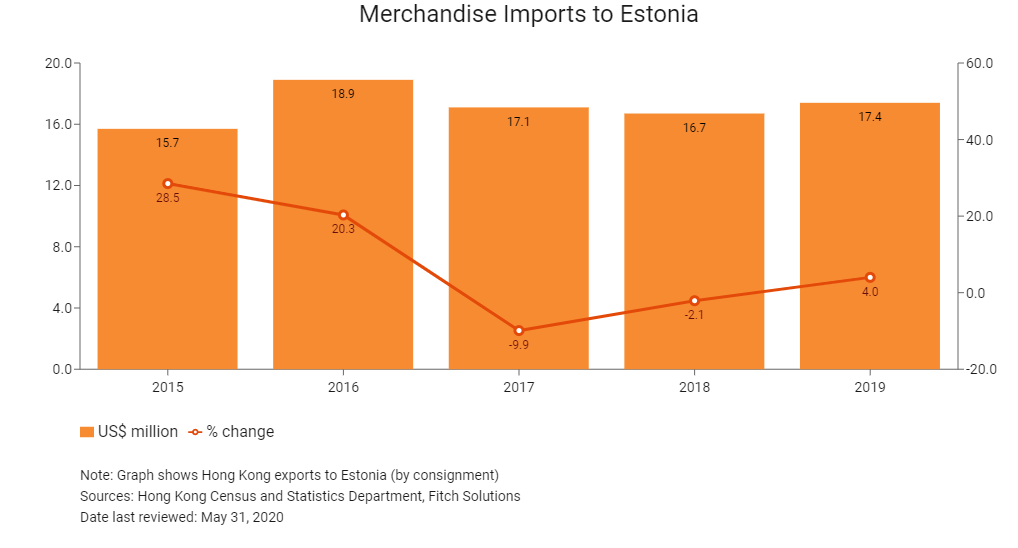 Note: The EU-located companies are from Belgium, France, Germany, Italy, the Netherlands, Sweden and the United Kingdom.
Source: Business Expectation Statistics Section of the Hong Kong Census and Statistics Department

Treaties and agreements between Hong Kong and Estonia

Hong Kong residents do not need a visa for Estonia for a period of up to 90 days.