Sound economic policies, maintained consistently since the 1980s, have contributed to steady economic growth, poverty reduction and a rise in foreign investment. The Chilean government conducts a rule-based countercyclical fiscal policy, accumulating surpluses in sovereign wealth funds during periods of high copper prices and economic growth and allowing deficit spending only during periods of low copper prices and growth. Chile has a market-oriented economy characterised by a high level of foreign trade and a reputation for strong financial institutions and sound policy that have given it the strongest sovereign bond rating in South America. Exports account for more than a quarter of the economy, with commodities making up some around 75% of total exports. Over the last several years, Chile has signed free trade agreements (FTAs) with the European Union (EU), South Korea, Mainland China and Japan, among other countries. In May 2010, Chile became a full member of the Organisation for Economic Co-operation and Development (OECD) after a two-year period of compliance with the organisation’s mandates. Encouraging innovation, improving the links between education and the labour market, and promoting the participation of women in the labour market will be essential for improving long-term growth prospects.

December 2018
The Comprehensive and Progressive Agreement for TPP – also known as TPP11 – was ratified by the required number of states on November 15, 2018 and came into force on December 30, 2018. The CPTPP encompasses 11 states (Australia, Brunei, Canada, Chile, Japan, Malaysia, Mexico, New Zealand, Peru, Singapore and Vietnam) and supersedes a number of existing FTAs that are in place (Chilean FTAs with Japan and Canada, for example). The CPTPP was beneficial for businesses as this gave them tariff-free access to a wider consumer base that would enable them to expand their sales.

July 2019
Chilean authorities unveiled plans to open an international tender for Austral Network, which includes the Carlos Ibáñez del Campo Airport in Punta Arenas. Considering the end of the current concession of the Punta Arenas airport complex, the Airports Directorate of the Ministry of Public Works has developed the Referential Extension and Improvement Project for the airport. The Carlos Ibáñez del Campo Airport had seen a growth rate of more than 7% in the last 20 years. The current airport had an area of 6,700sq m and the new works would increase the area to 16,000square metres. In the new 15-year concession period to 2037, the airport is likely to receive 2.3 million passengers. The works are part of Piñera's Airports Plan.

November 2019
Construction was progressing on the expansion of Arturo Merino Benítez International Airport in Santiago, with completion due in 2021, according to the Ministry Of Public Works, which was executing the project. The USD700 million project included the construction of a new international passenger terminal, the upgrade of the existing passenger terminal and other installations. The project would increase the airport's capacity to accommodate 30 million passengers annually by 2030.

November 2019
Mainstream Renewable Power had reached financial close on the first phase of the USD1.7 billion Andes Renovables wind and solar power project in Chile. The 1.3GW Andes Renovables was a three phase wind and solar generation platform, comprising seven wind and three solar photovoltaic (PV) power plants. All the plants in phase one were expected to become operational in 2021.

March 2020
On March 19 the government presented a package of fiscal measures in response to the Covid-19 pandemic of up to USD11.8 billion (about 4.7% of GDP), focused on supporting employment and firms’ liquidity. The set of measures included higher healthcare spending; enhanced subsidies and unemployment benefits; a set of tax deferrals; liquidity provision to small- and medium-sized enterprises (SMEs), including through state-owned Banco del Estado; and accelerated disbursements for public procurement contracts.

April 2020
On April 8 the government announced additional support in response to the Covid-19 pandemic for the most vulnerable and independent workers of about USD2 billion and a credit-guarantee scheme (of USD3 billion) that could apply to credits of up to USD24 billion to facilitate firms’ financing.

April 2020
The BCC undertook key Covid-19 response measures, including: two policy rate cuts by cumulative 125 basis points to 0.5%; the introduction of a new funding facility for banks conditional on them increasing credit; the inclusion of corporate securities as collateral for the BCC's liquidity operations and the inclusion of high-rated commercial loans as collateral for the funding facility operations; the initiation of a programme for the purchase of bank bonds (up to USD8 billion); the expansion of eligible currencies for meeting reserve requirements in foreign currencies; flexibility of BCC regulations for bank liquidity; and the expansion of the programme for providing liquidity in pesos and US dollars through repo operations and swaps.

The Financial Market Commission unveiled a package of measures to facilitate the flow of credit to businesses and households, which includes special treatment in the establishment of provisions for deferred loans; the use of mortgage guarantees to safeguard SME loans; adjustments in the treatment of assets received as payment and margins in derivative transactions; and the revision of the timetable for the implementation of Basel III standards.

May 2020
The Ministry of Public Works unveiled a schedule for 14 infrastructure concessions worth USD3.6 billion for the period between April 2020 and March 2021. The Q220 projects included the construction of hospitals in the Biobío region at a cost of USD360 million and the USD300 million Coquimbo hospital. In Q320 theUSD180 million Valdivia health network and USD40 million Digital Bus Stop concession will be tendered. The Ruta 78 Highway Second Concession (USD536 million), the Santiago Airport Road Access Third Concession (USD42 million), the Ruta 5 Highway-Chiloé Longitudinal Road (USD503 million) and La Serena Hospital (USD300 million) will be tendered in Q420. The remaining four projects, worth USD700 million, would be tendered in Q121. 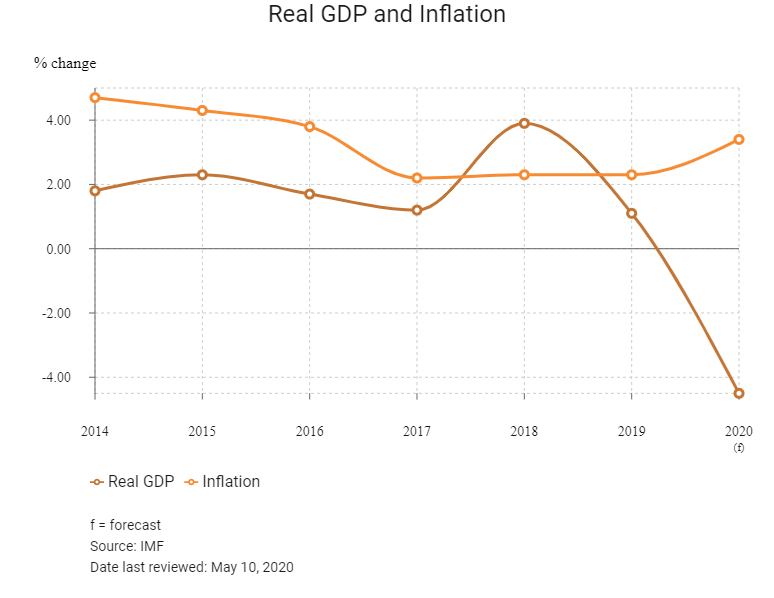 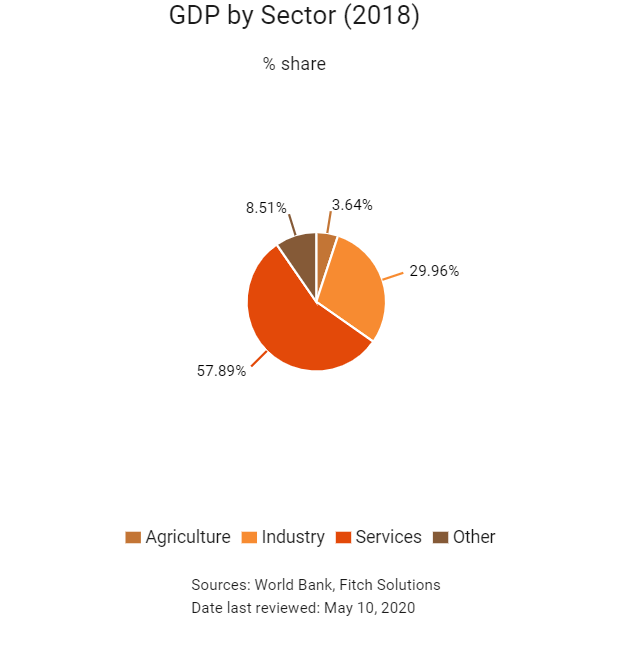 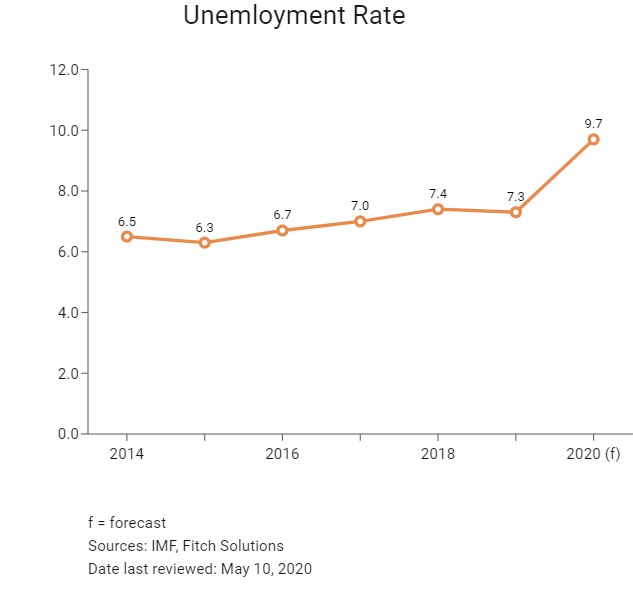 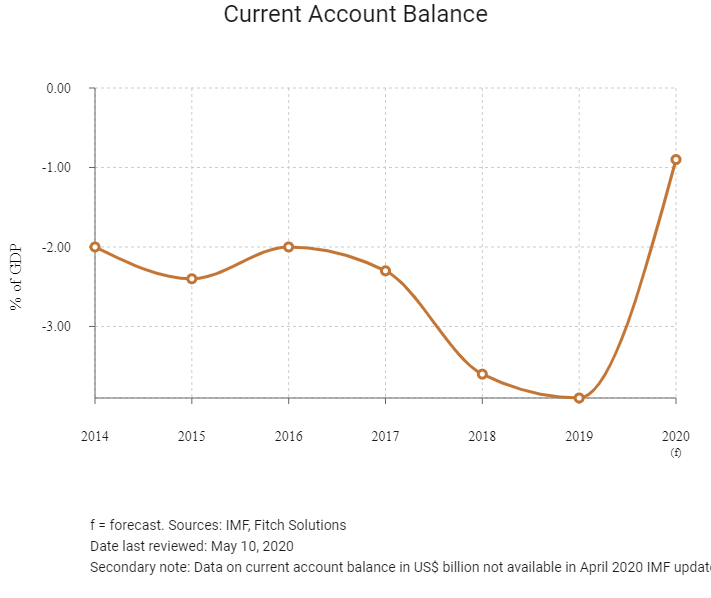 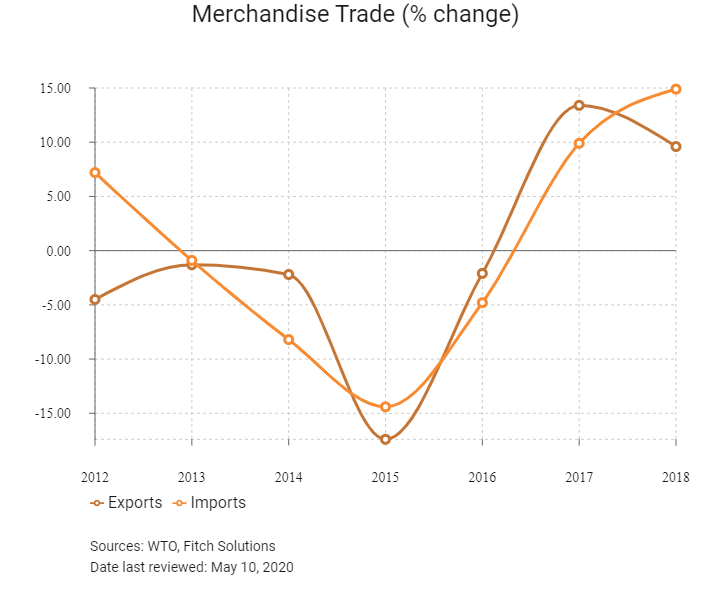 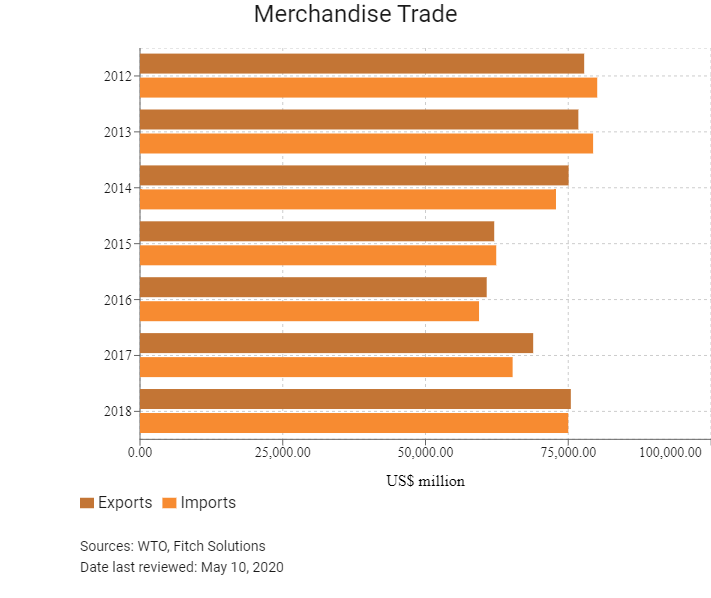 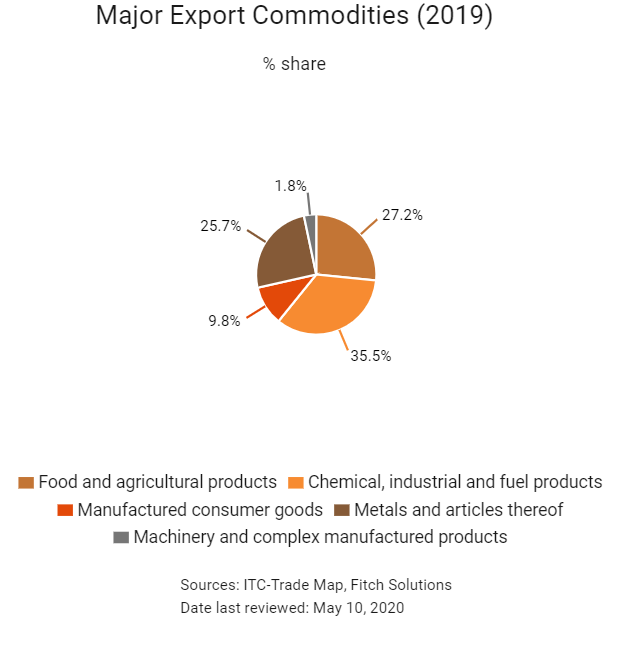 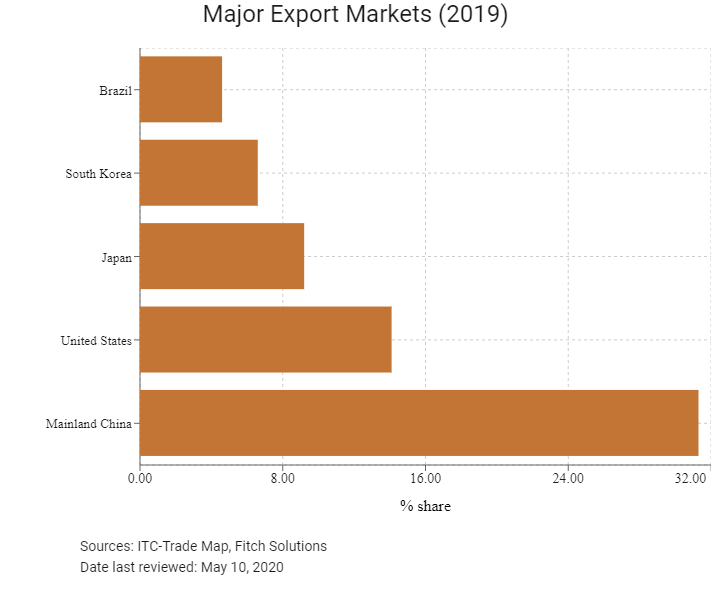 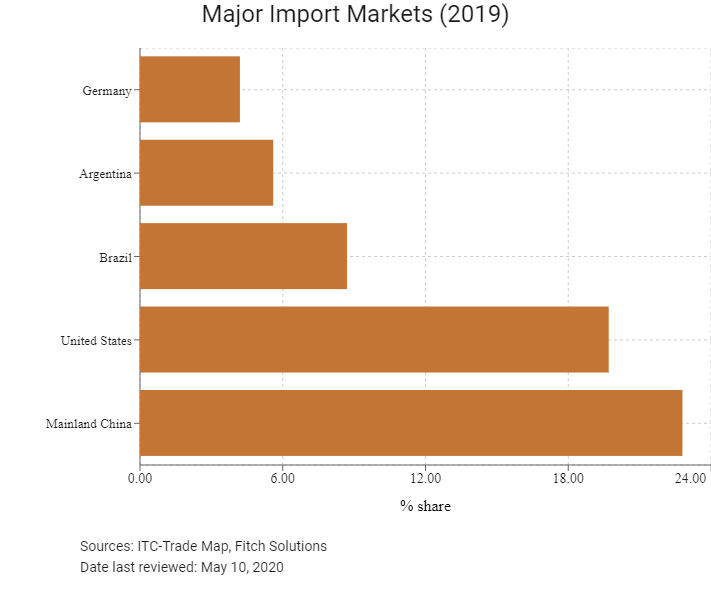 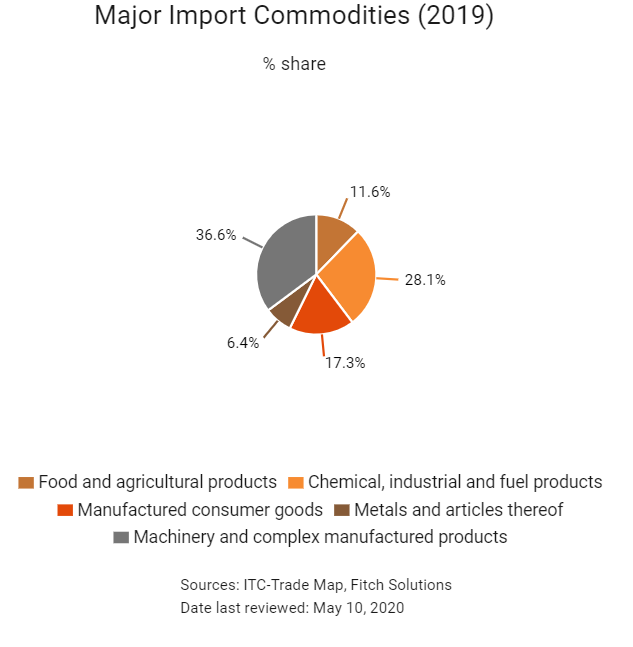 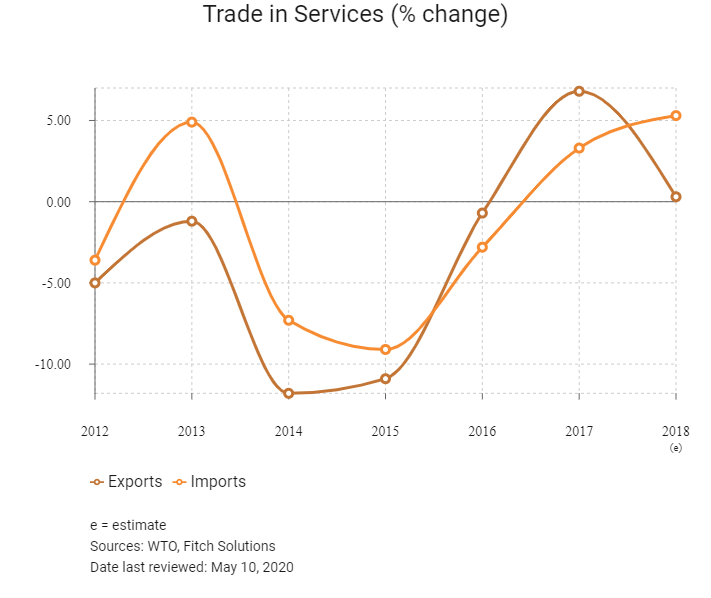 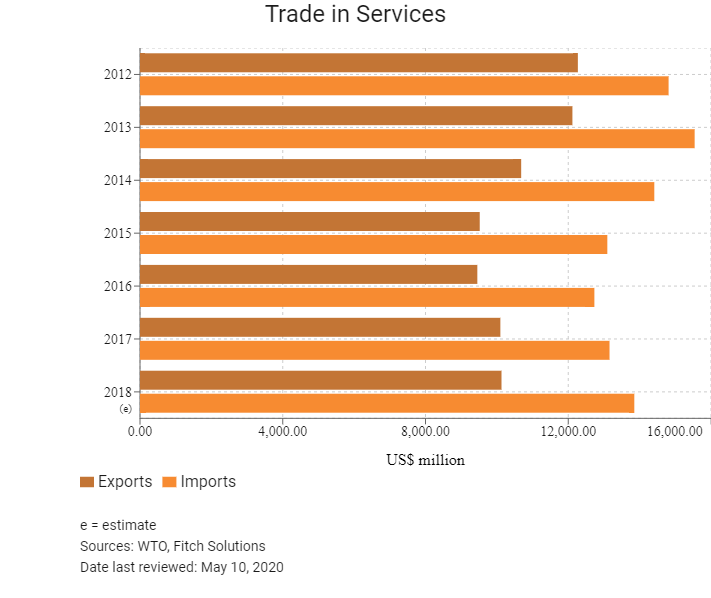 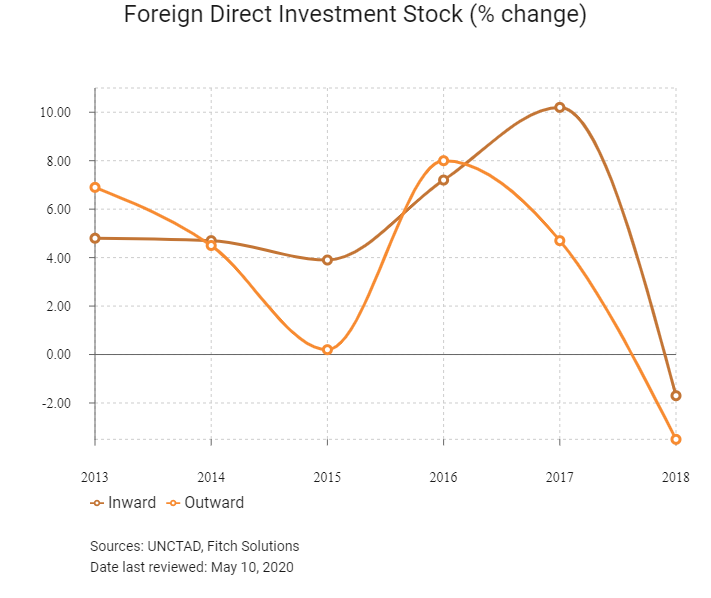 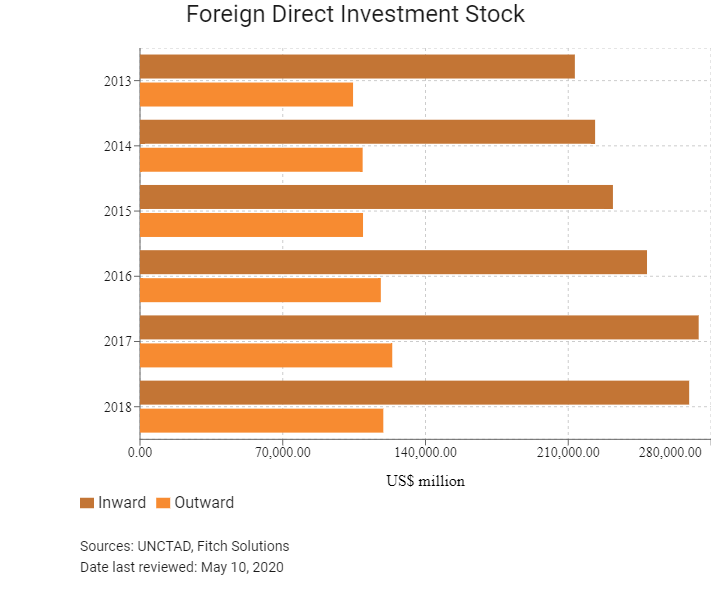 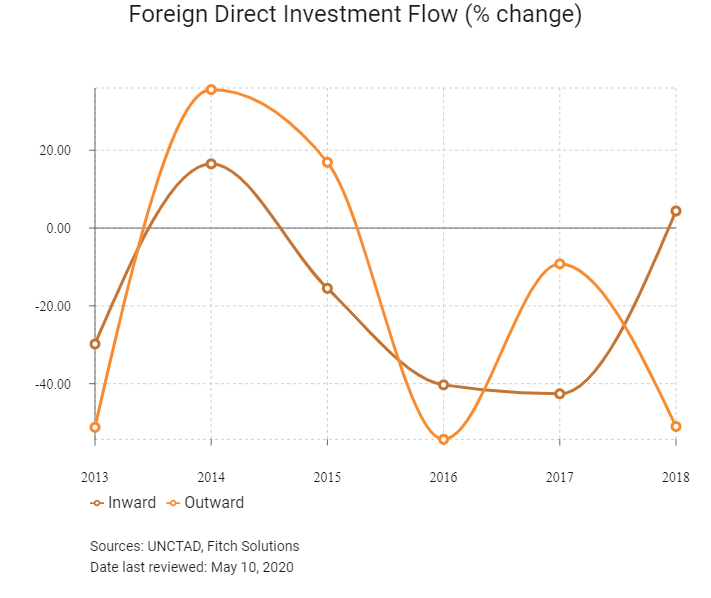 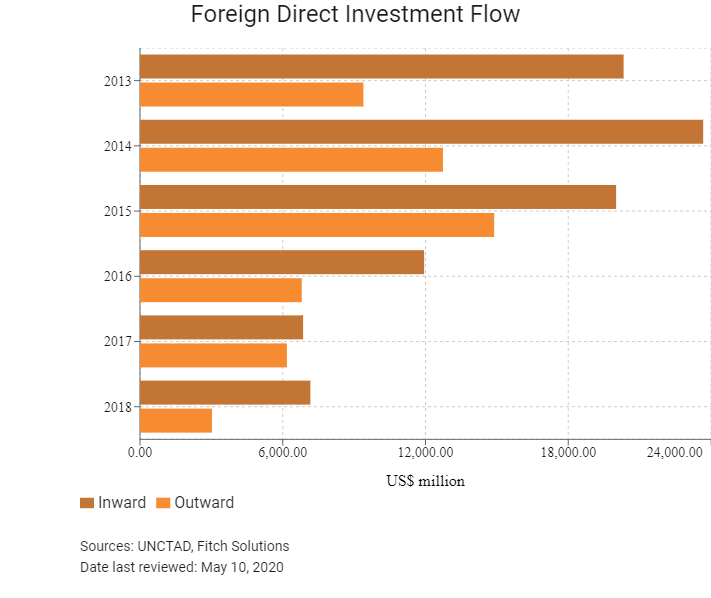 Note: In addition to the regime-specific set of tax rates, all businesses will still need to pay a standard set of taxes.

In addition to the regime-specific set of tax rates, all businesses will still need to pay a standard set of taxes.

Labour regulations continue to restrict the employment of foreign nationals, preventing a large increase in the country's migrant population. The labour law stipulates that at least 85% of a company's workforce must be Chilean, if the business employs more than 25 workers.

Chilean work visas are regulated by the need for a contract prior to application. The bureaucratic process to obtain work permits and residence visas for foreign nationals in Chile is, nonetheless, relatively simple. Eligibility is generally dependent on skills and education, which facilitates the flow of highly skilled workers. The visa process is easier when the applicant is outside the country, as making changes to the visa status once in the country can be an arduous process and is subject to delays.

Visas, such as the work contract visa and the temporary resident visa, offer provisions for dependents and entitle holders to apply for permanent residency after two years. Foreign employees and their dependents can also gain entry based on FATs that Chile holds with numerous countries. The permitted length of stay varies from six months to one year depending on the profession and position of the applicant. This offers a larger variety of options for companies wishing to hire foreign workers.

Chile differentiates between resident and non-resident individuals for tax purposes. Residents (those in Chile for longer than six months in a calendar year) are taxed on their worldwide income, and non-residents are only taxed on Chile-sourced income. Foreign residents are taxed on Chile-sourced income for the first three years, after which they are taxed on worldwide income. Individual income tax is paid based on the accrual of monthly taxable units (MTUs), which may be adjusted on a month-by-month basis in accordance with inflation. In December 2018, one MTU was worth around USD74.46. The tax regime on individuals in Chile is relatively unfavourable, with tax rates charged progressively from 0% to 35%. The top rate is among the highest levied in any Latin American state and will cause difficulties for businesses attempting to attract well-paid foreign workers as they may require higher salaries to offset this tax burden. In accordance with the tax reform approved in 2014, the highest marginal rate was reduced to 35% (effective from January 1, 2017), down from 40%.

Sources: Ministry of the Interior and Public Security, Fitch Solutions

ECONOMIC RISK
Chile’s economy is highly reliant on commodity exports, and the risk of a sharper than expected slowdown in key export markets such as Mainland China as well as risk of subdued copper prices, poses risks to Chile’s trade balance. Capital investment may remain suppressed owing to policy uncertainties stemming from the drafting of a new constitution. A sharp fall in global demand, the growing domestic Covid-19 outbreak and tightening financial conditions pose significant downside risks to economic activity in Chile in 2020.

OPERATIONAL RISK
Chile's open economy and strong democratic institutions make it one of the most stable countries for doing business in the region. Much of its appeal lies in the low risks that businesses face from regional criminal activity, which translates to lower security costs and reduced risk of implication in financial crime. The country boasts a wealth of natural resources, and the strong rule of law has provided a basis for economic growth and significant inflows of foreign direct investment, which has been further encouraged by the signing of numerous free trade deals with key regional and global partners. Logistics infrastructure is well developed and more reliable than elsewhere in Central and South America, and while the labour force is somewhat smaller than in countries such as Brazil, Chile benefits from a better-educated workforce and less regulation in comparison with regional peers. 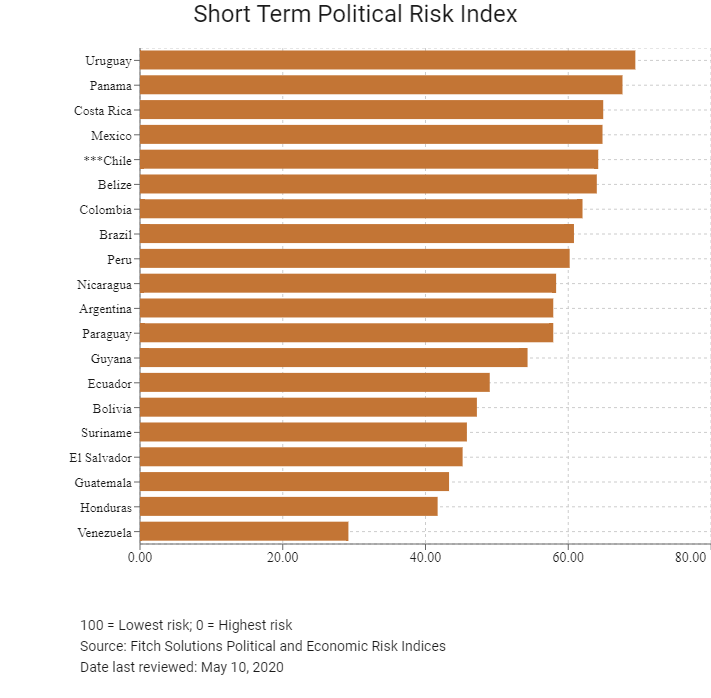 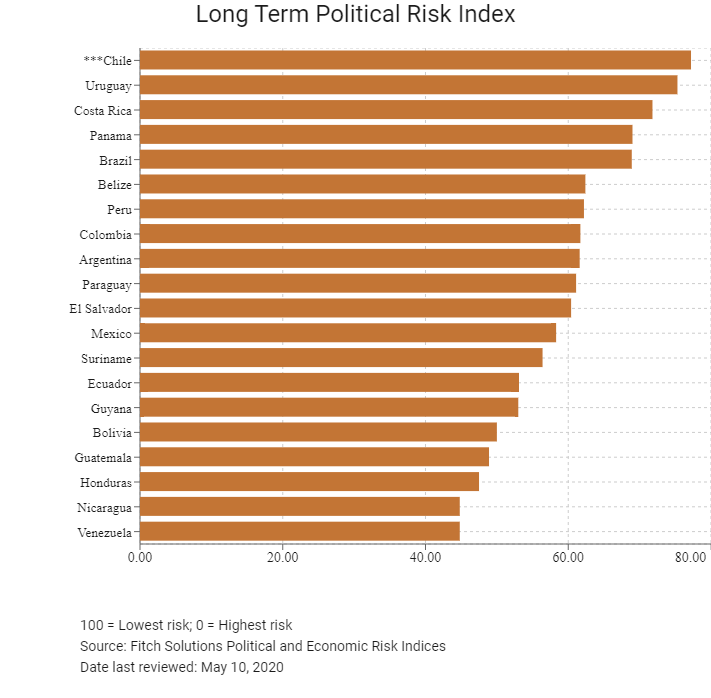 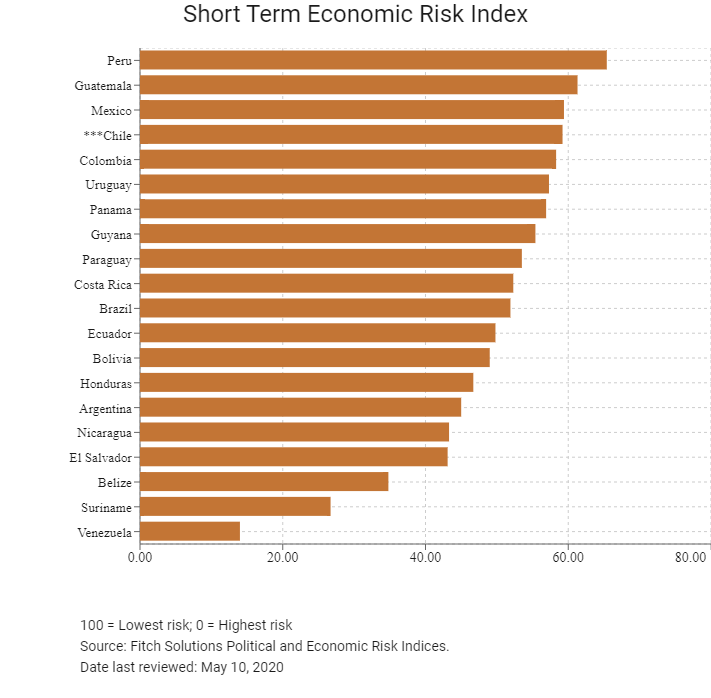 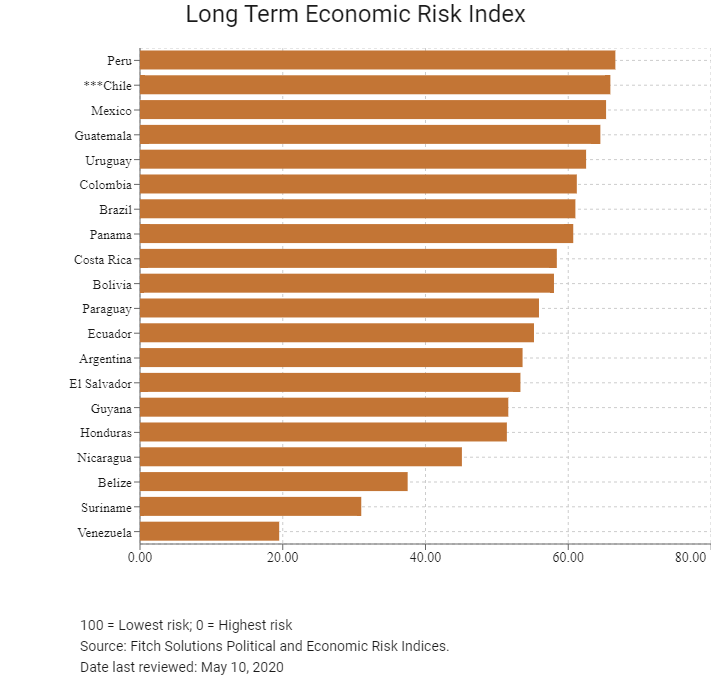 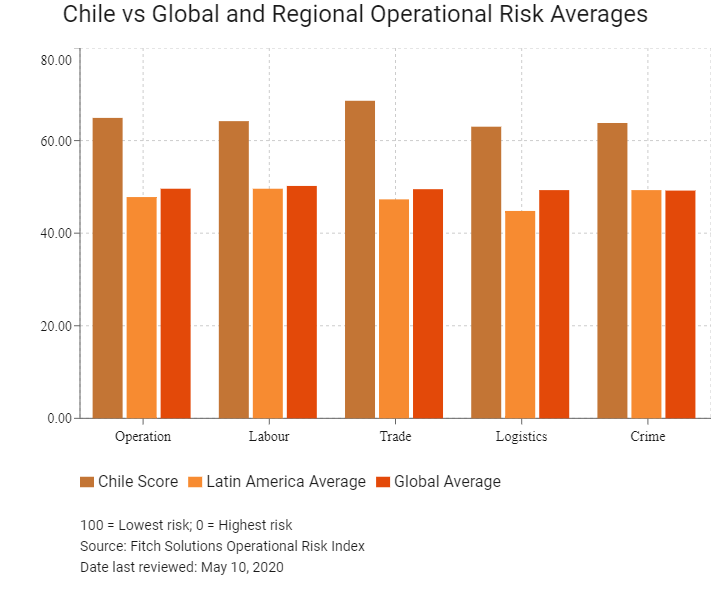 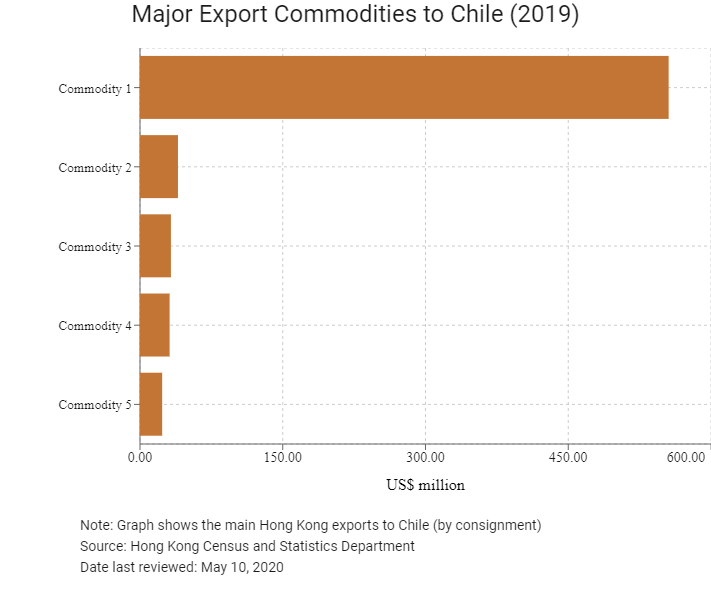 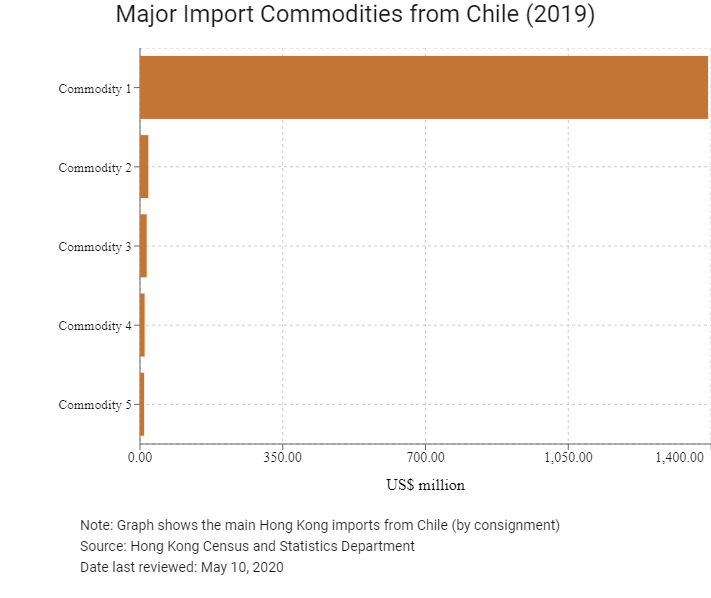 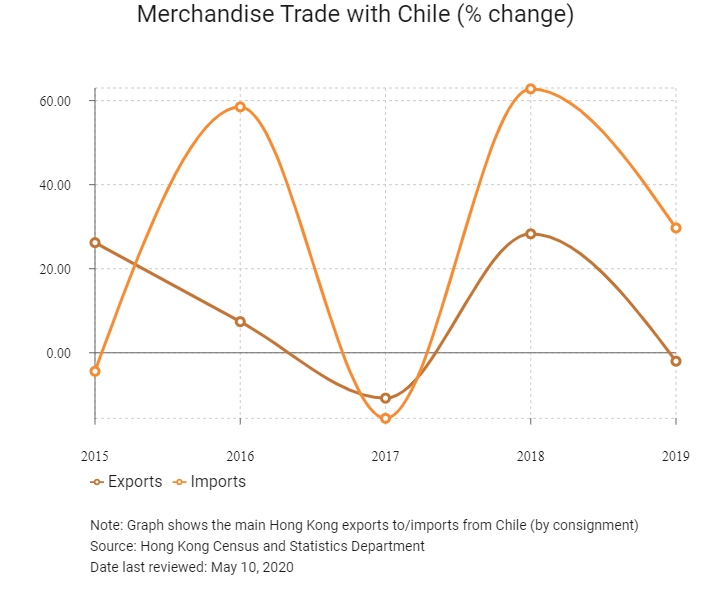 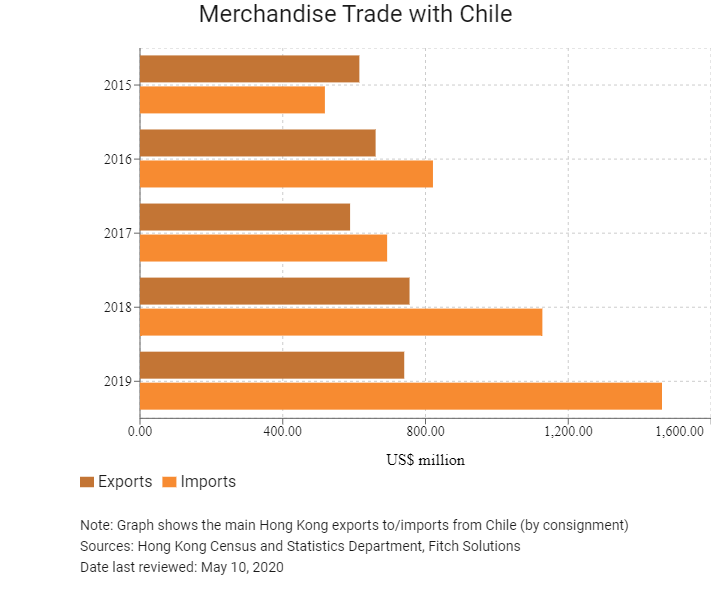 Note: Growth rate for resident data is from 2015 to 2019. No UN data available for intermediate years
Source: Hong Kong Tourism Board
Date last reviewed: May 10, 2020

Treaties and agreements between Hong Kong and Chile

As an important step in accommodating greater synergies, Hong Kong signed a FTA with Chile on September 7, 2012, which came into force on October 9, 2014. Moreover, Hong Kong and Chile signed an investment promotion and protection agreement on November 18, 2016 – an investment agreement under the FTA between Hong Kong, Mainland China and Chile – which is now pending entry into force.

Entry is visa-free for up to 90 days.