Since the presidential election in April 2018, the government of Azerbaijan has undergone significant changes. These include the nomination of a new Prime Minister and the appointment of several key ministers in charge of education, tax reforms, agriculture and rural development, the environment and energy. The new government has been tasked with continuing reforms in key sectors to recover economic growth. Supported by stable oil production and a modest acceleration in domestic demand, economic growth remains sluggish but in positive territory. Since economic prospects will largely rely on rising gas exports in the near term, broader-based sustainable long-term growth will need to be bolstered by the implementation of structural reforms to boost private sector investment, reduce fiscal imbalances, tackle issues of competitiveness and develop human capital.

August 2018
Officials from the five littoral Caspian Sea nations – Azerbaijan, Russia, Kazakhstan, Turkmenistan and Iran – agreed upon a legal framework to share the world's largest inland body of water, which bridges Asia and Europe and has reserves of oil and gas.

February 2019
BP announced plans to ramp up production at the Shah Deniz gas field while maintaining flat output at the Azeri-Chirag-Guneshli oil field in 2019.

February 2019
Formula One announced the renewal of the Azerbaijan Grand Prix in Baku until at least 2023. Baku also hosted the EUFA Europa league final in May 2019. The events signify additional engagement with Europe and international bodies.

February 2019
Azerbaijan's Energy Minister Parviz Shahbazov announced that Balkan countries may wish to connect to the SGC (which incorporates the South Caucasus Pipeline, the Trans-Anatolian Pipeline and the Trans-Adriatic Pipeline). He also suggested that Turkmenistan was interested in joining the project, the aim of which is to transport gas from the Caspian region to Europe via Georgia and Turkey.

April 2019
BP and its partners have approved the Azeri Central East (ACE) project, the next stage of development of the Azeri-Chirag-Deepwater Gunashli (ACG) oilfield complex in Azerbaijani waters in Caspian Sea. The USD6 billion development included a new offshore platform and facilities designed to process up to 100,000 barrels of oil per day. The project is likely to start production in 2023 and produce up to 300 million barrels over its lifetime. The development would include new infield pipelines to transfer oil and gas from the ACE platform to the existing ACG Phase 2 oil and gas export pipelines for transportation to the onshore Sangachal Terminal.

2019
The Laki-Gabala railway line in Azerbaijan is expected to be ready by the end of 2019, according to Azerbaijan Railways. The 43km line would connect the Laki station with the Gabala International Airport. The project also included the construction of 103 drainage systems, 16 tunnels and bridges along the railway line. It also included building a station in Garagan-Shikhlar in Agdash district, as well as a train station near the Gabala airport. The route included a 20km mountainous stretch from Laki station to Gabala.

October 2019
Italy-based oil and gas contractor Saipem and its consortium partners Boshelf and Start Gulf FZCO won three contracts from BP for the development of the Azeri-Chirag-Gunashli (ACG) offshore oil and gas field in the Caspian Sea off Azerbaijan's coast, according to a press release from Saipem. Of the three contracts, two are for pipeline design, pipelay and associated works, and the third is for the transport and installation of four jacket pin piles, subsea structure and spools. Saipem's share of the overall contract value is around USD145 million and the ACG complex spans an area of more than 4,000sq km.

May 2020
As of May 21, the government implemented measures in response to the Covid-19 outbreak in the country. The authorities increased spending on public health (AZN8.3 million) and created a Covid Response Fund, to which it has transferred AZN20 million, with additional contributions from the public and private sectors. The government also announced support to the affected businesses amounting to AZN3 billion (3.5% of GDP). 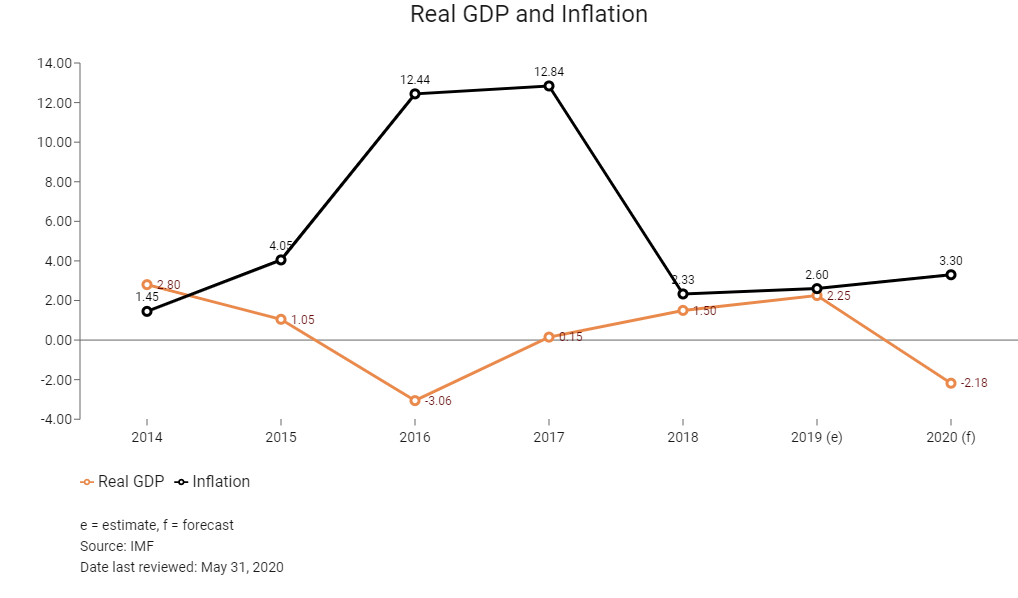 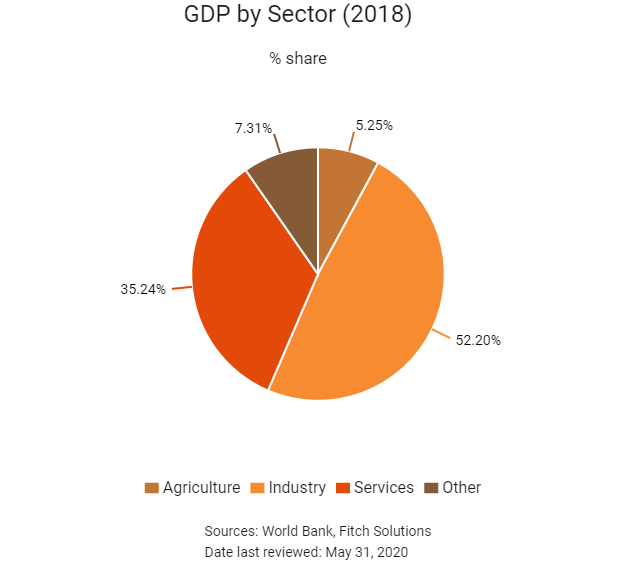 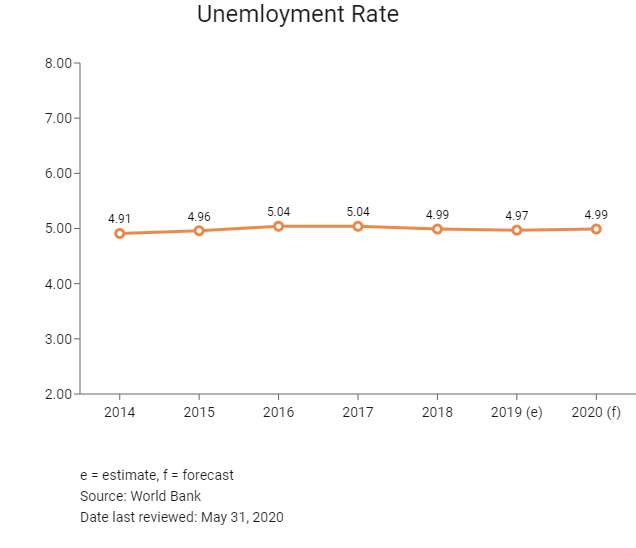 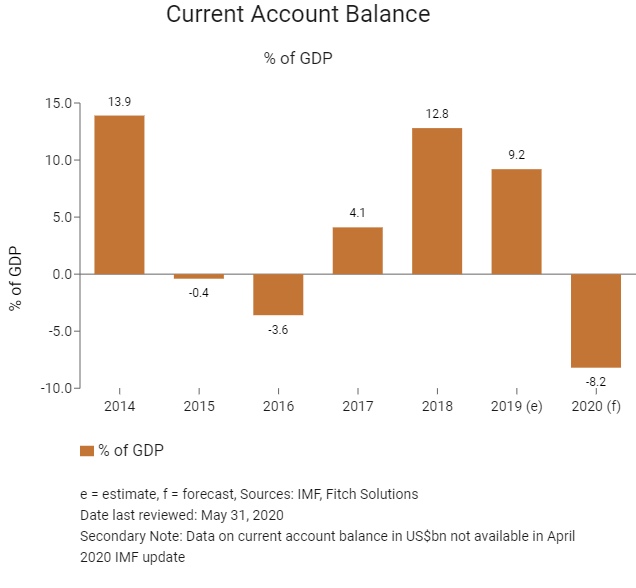 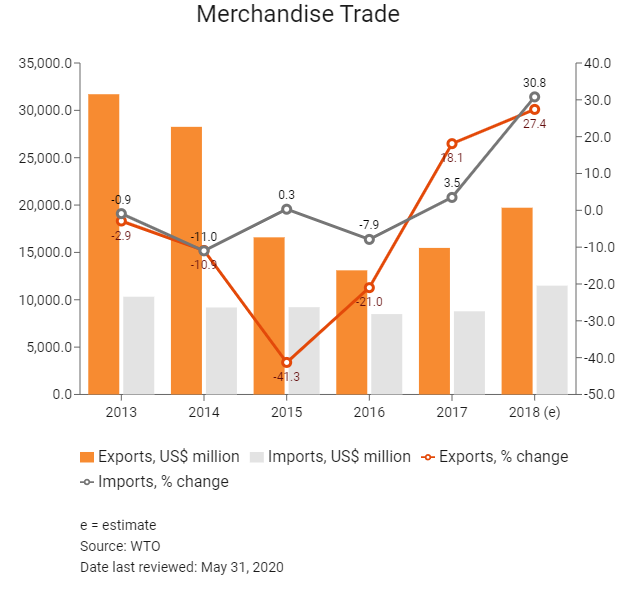 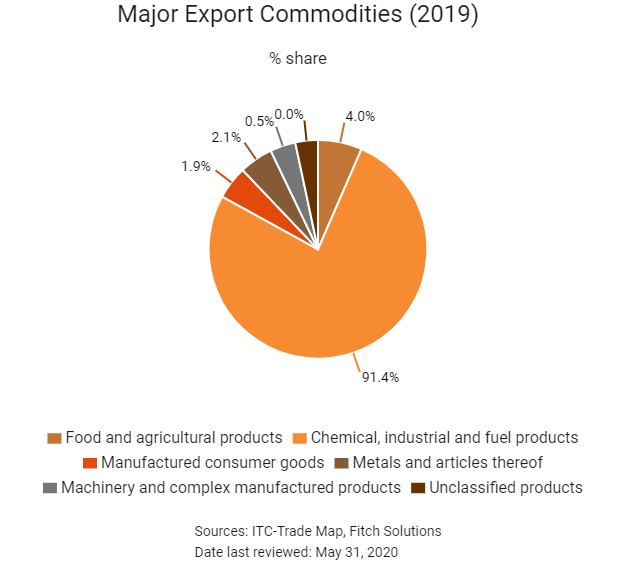 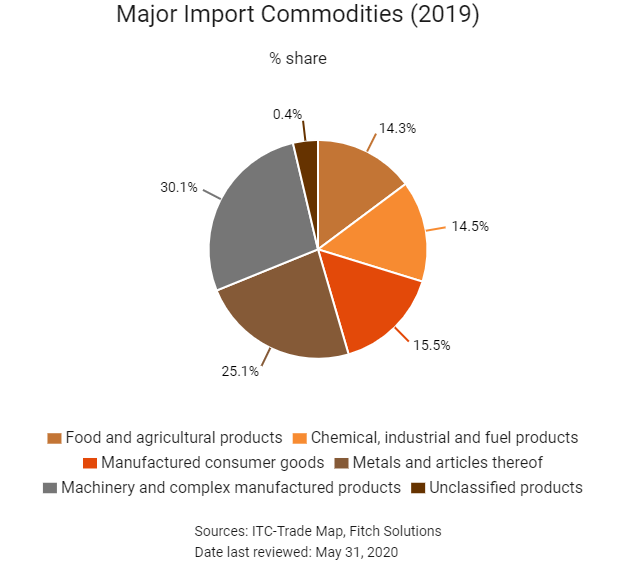 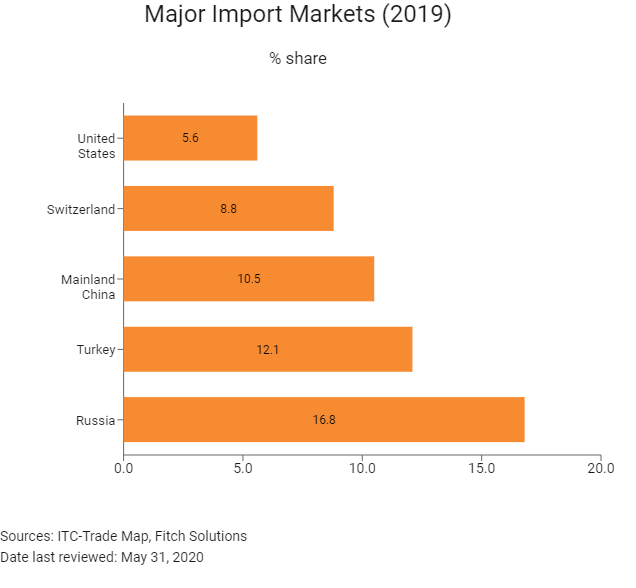 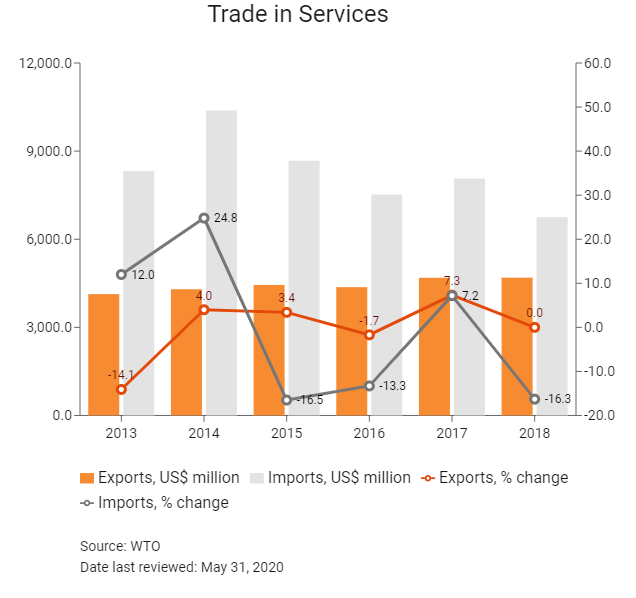 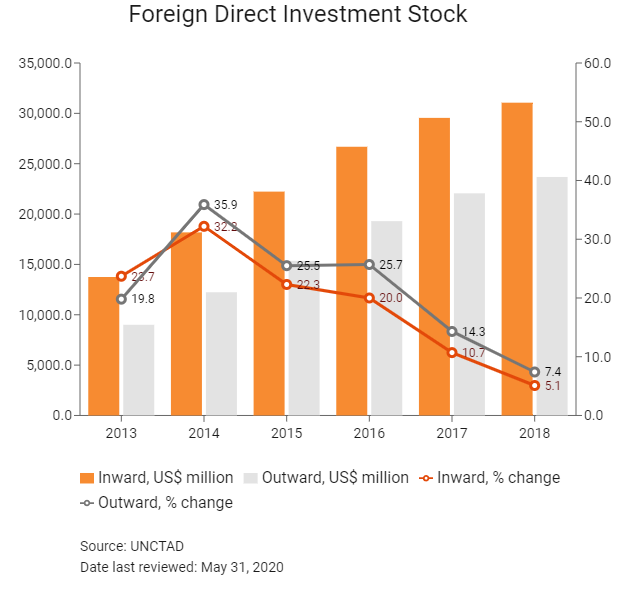 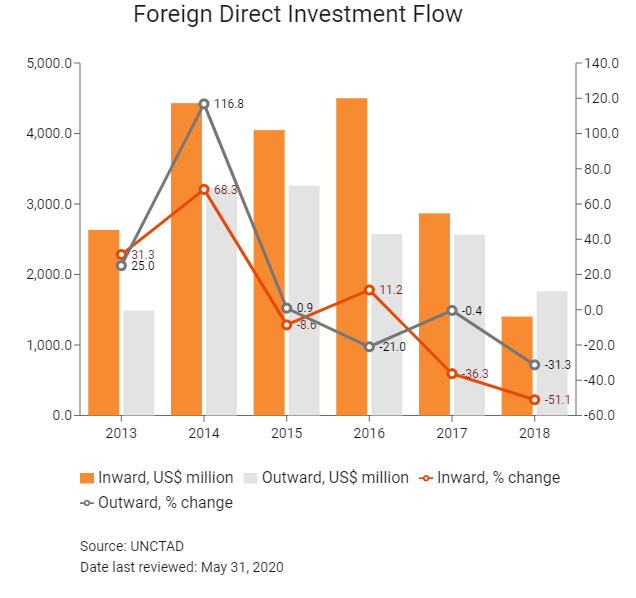 Sources: US Department of Commerce, Azerbaijan Export and Investment Promotion Foundation, Ministry of Taxes of the Republic of Azerbaijan, Fitch Solutions

Source: Ministry of Taxes of the Republic of Azerbaijan

Source: Ministry of Taxes of the Republic of Azerbaijan
Date last reviewed: May 31, 2020

Azerbaijan operates a quota for migrant workers, set at 12,000, and the government encourages businesses to hire from the domestic labour pool unless specialist skills are required that cannot be supplied by the Azerbaijani labour market. This makes it more difficult to import skilled foreign workers as there is an imposed limit on work permits for expatriates. Generally, in order to obtain a work permit in the country, a foreigner must have at least five years of experience in the field. This blocks the flow of unskilled workers from abroad and encourages more effective use of local labour. On the positive side, the process of obtaining permits for foreign workers has been streamlined since the introduction of the one-window service, whereby applications are submitted to one government department – the State Migration service – which then works with other agencies to issue work permits and other necessary documentation. This eases the bureaucratic burden of employing foreign workers.

Citizens of the following nine countries can visit Azerbaijan without a visa for up to 90 days: Belarus, Georgia, Kazakhstan, Kyrgyzstan, Moldova, Russia, Tajikistan, Ukraine and Uzbekistan. Citizens of the following countries can obtain a visa for Azerbaijan on arrival, valid for 30 days, at any international airport: Bahrain, mainland China, Indonesia, Israel, Japan, Kuwait, Malaysia, Oman, Qatar, Saudi Arabia, the Republic of Korea and the United Arab Emirates.

ECONOMIC RISK
The economic growth outlook for Azerbaijan remains subdued, amid a weak external backdrop and low oil prices due to the Covid-19 pandemic, as the country remains overwhelmingly dependent on oil and gas revenue for GDP growth. About 90.0% of Azerbaijan's exports rely on energy and 40.0% of economic output. With oil prices set to remain subdued in the years ahead, the government will only gradually carry out its economic diversification and privatisation plans. In effect, the government will not significantly reduce its footprint in the economy, which will hinder the development of the non-oil sector and attract foreign direct investment.

OPERATIONAL RISK
Azerbaijan has one of the more competitive operating environments for businesses in the Caucasus and Central Asian region. The country's performance is boosted by its labour market dynamics and logistics profile, with key areas of strength being the good levels of education present among its labour force, the quality and extent of its transport network, as well as its domestic power generation and refining capacities. Areas of weakness include the lack of diversity in Azerbaijan's economy, which is highly dependent on crude exports, elevated legal risks and the security environment, which stems from Azerbaijan's ongoing dispute with neighbouring Armenia over the Nagorno-Karabakh territory. 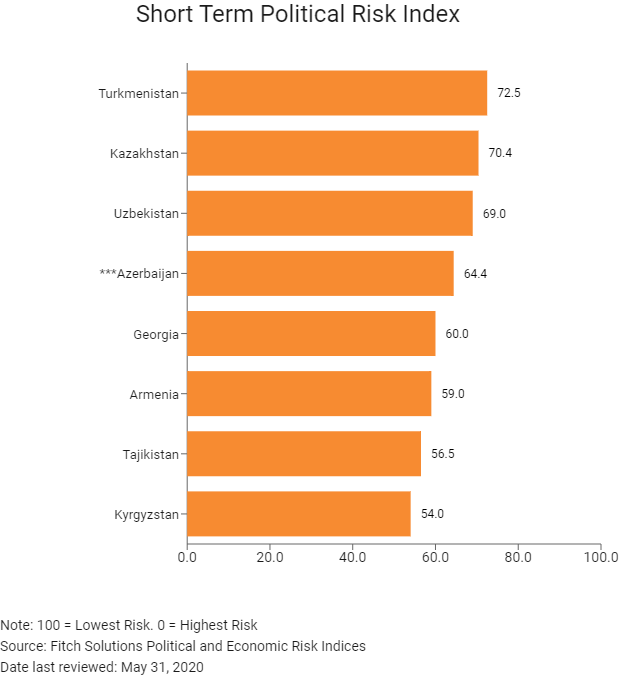 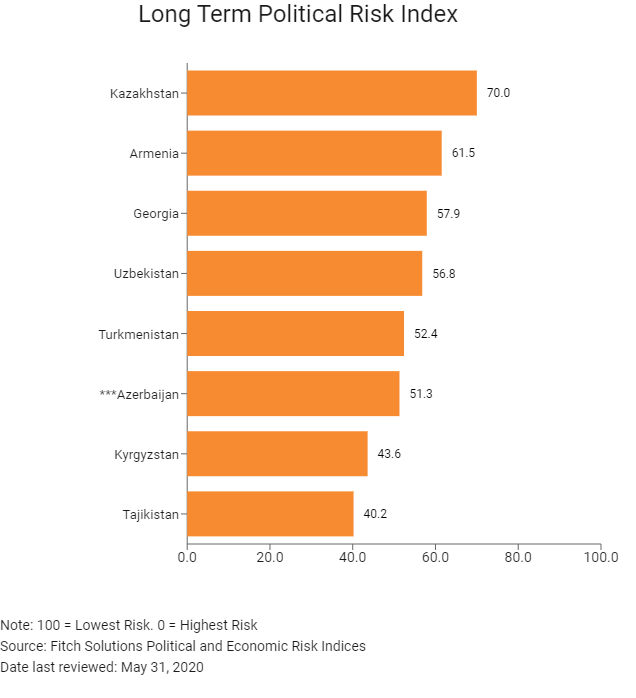 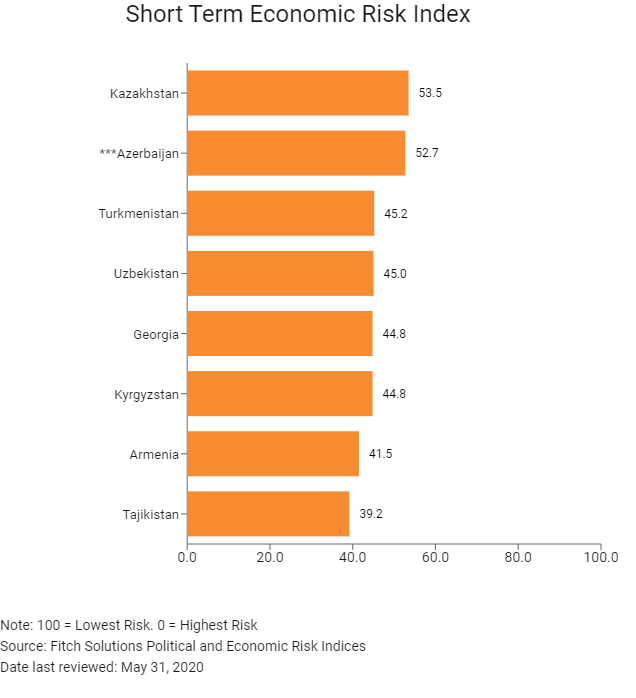 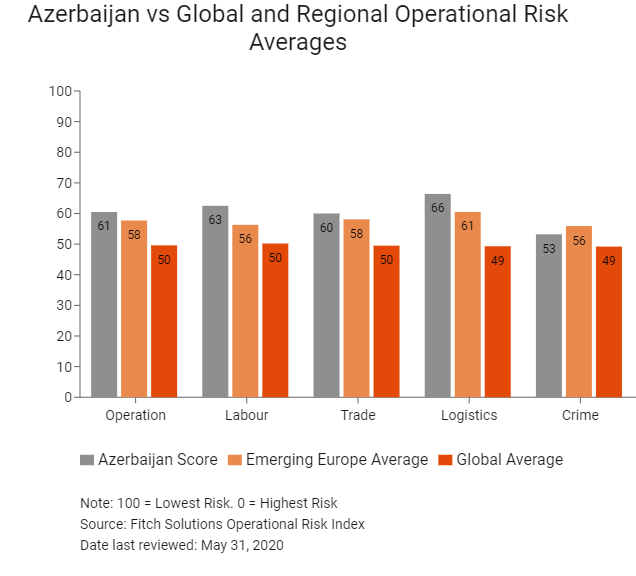 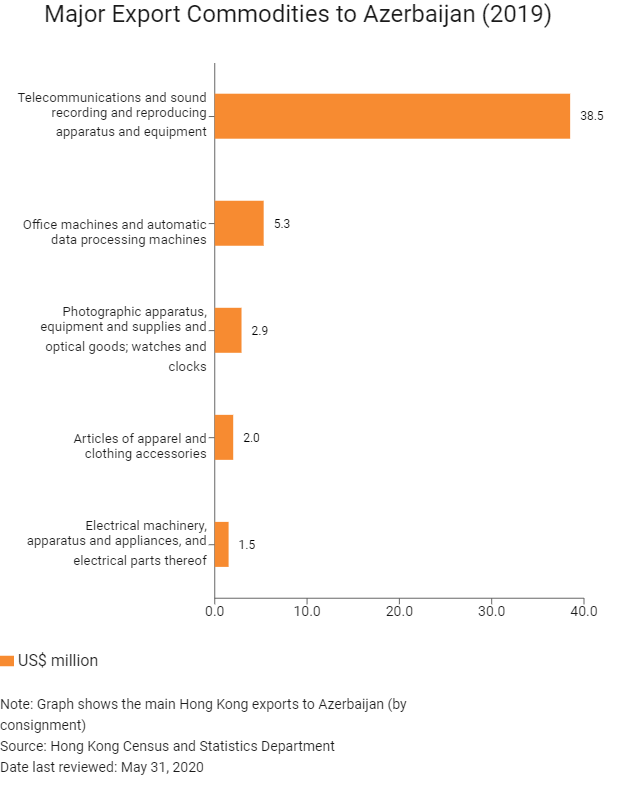 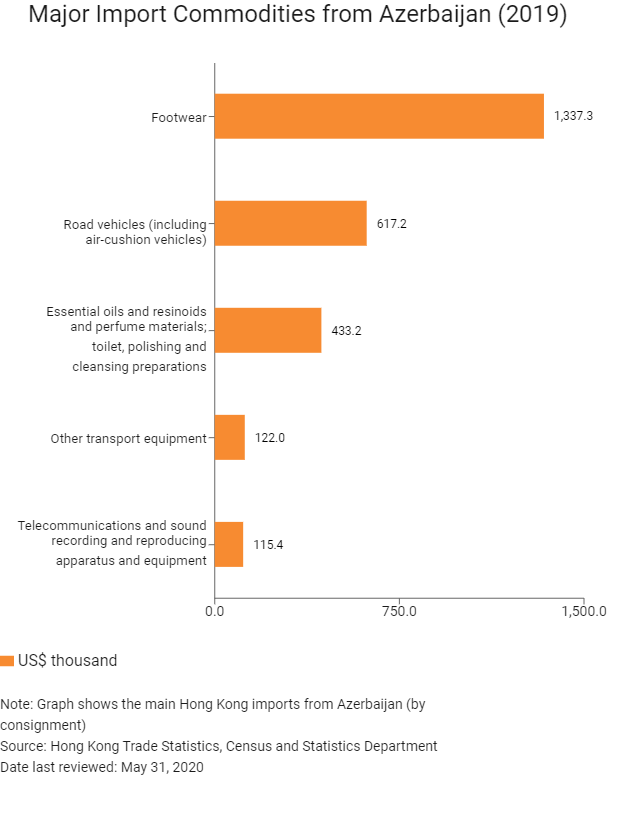 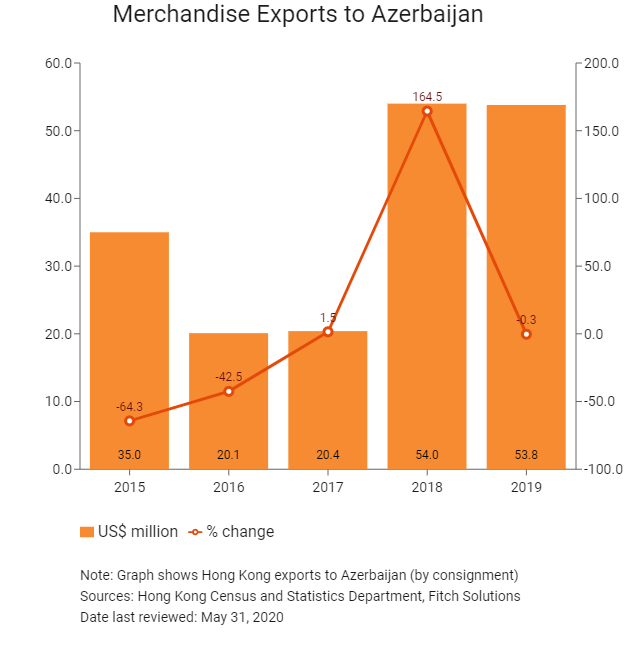 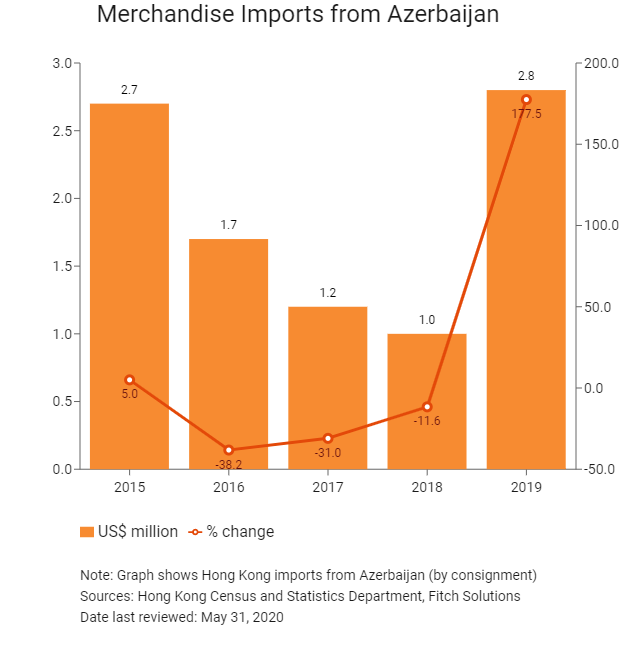 Treaties and Agreements between Hong Kong, Mainland China and Azerbaijan

A bilateral investment treaty has been in force between Mainland China and Azerbaijan since April 1, 1995.

Hong Kong residents are required to apply for a 30-day or 90-day visa to visit Azerbaijan.

Source: Ministry of Foreign Affairs of The Republic of Republic of Azerbaijan
Date last reviewed: May 31, 2020