Slovenia's favourable geographical location has enabled it to become a strong regional and international player with an export-oriented manufacturing sector. However, the global economic crisis of 2008 hit hard and structural reforms are needed (through greater privatisation, improved openness to foreign investment, investor-friendly changes to taxes, labour flexibility to support greater economic competitiveness) and rising exports have the potential to lift Slovenia's long-term growth and prevent the resurfacing of imbalances that emerged before 2007. Efforts to address the threat of a rapidly ageing population are also necessary to ensure public finances remain on a sustainable trajectory. In addition, Slovenia's five-party minority coalition government continues to enjoy a strong level of public support, but will face further challenges as it attempts to tackle sensitive healthcare and welfare reforms.

April 2017
Slovenia and Hong Kong signed a memorandum of understanding that would facilitate cooperation in wine-related businesses. The agreement might serve as a model for other Slovakian businesses to make use of the advantages offered by Hong Kong as a means to reach the East Asia markets.

June 2017
An international court of arbitration decided in favour of Slovenia in its maritime dispute with Croatia, ruling that it should have direct access to international waters in the Adriatic Sea using a corridor that crosses Croatian waters.

September 2018
Sarec, of the LMS, was sworn in as head of a centre-left minority government after the SDS failed to form a coalition.

April 2019
Slovenia’s finance minister, Andrej Bertoncelj, met with the IMF and World Bank representatives (as part of the institutions’ spring meetings) to discuss how the country is reconciling the need to improve people’s lives while maintaining fiscal stability.

April 2019
The Slovenian government issued a decree for the Divača-Koper railway line track construction contract with state-owned TDK2, to the value of USD1.1 billion. TDK2 would build the 27km second track. It would also conclude a contract based on mutual rights and obligations.

August 2019
The EU Cohesion Fund was to provide EUR101 million to modernise a railway section between Maribor and Šentilj in Slovenia. The project would increase the number of trains running on the route from 67 to 84 per day. Maribor Tezno, Maribor, Pesnica and Šentilj stations would also be refurbished under the project, while improvements would be made at the Šentilj tunnel. The project would also cover construction of the Pekel tunnel. The new railway line was expected to start operations by February 2023.

September 2019
Marjan Sarec of the LMS was sworn in as head of a centre-left minority government, after the SDS failed to form a coalition.

October 2019
The new Bank of Slovenia regulations, consumer loans other than mortgages could no longer exceed maturity of 7 years while borrowers’ debt servicing costs, including mortgages, could not exceed 67% of income.

October 2019
The Slovenian parliament passed legislation on bank bail-in repayments under which the Bank of Slovenia would have to cover all possible repayments to those who lost their investments during the country’s 2013 overhaul of the banking industry.

January 2020
Slovenian Prime Minister Marjan Šarec announced on January 27 that he would resign, citing the failure of his five-party minority coalition government to pass legislation. Hours before his announcement, Finance Minister Andrej Bertoncelj from the prime minister's own party (List of Marjan Šarec (LMŠ) also resigned over the government’s plans to cover losses of the national health system in the Slovenian budget.

February 2020
The European Investment Bank had agreed to provide a EUR90 million (USD97.5 million) loan to Slovenia-based firm Družba za avtoceste v Republiki Sloveniji (DARS) to modernise and extend the Karavanke tunnel that links the motorway between Slovenia and Austria. DARS would expand the tunnel with a new tube, revamp the existing tube and boost tunnel safety. Additionally, the bank would provide a separate loan of EUR95 million (USD102.9 million) to Austrian firm ASFINAG to link the existing highway in Austria to the new 8km tunnel.

February 2020
Telekom Slovenije and Iskratel would cooperate to support the development of smart industries in Slovenia. Increased investment in 5G would foster the adoption of advanced technologies, opening up opportunities for Slovenian businesses to benefit from the fourth industrial revolution. Smart manufacturing would be a key focus of this partnership, with the sector being paramount for the country’s economy. 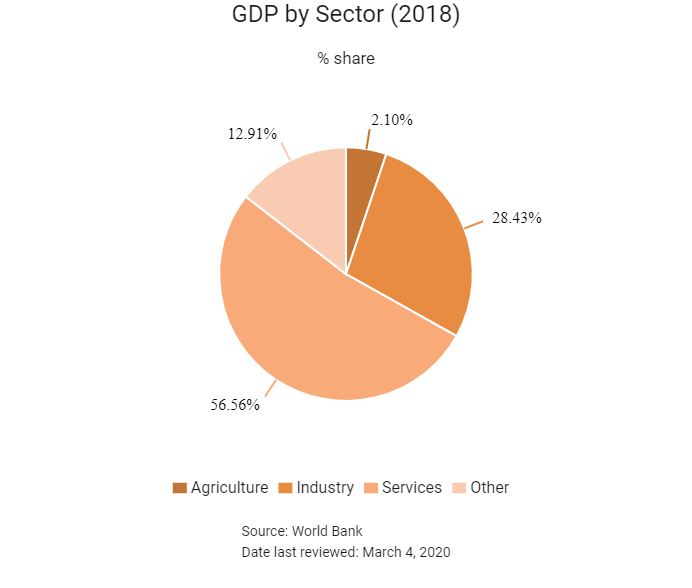 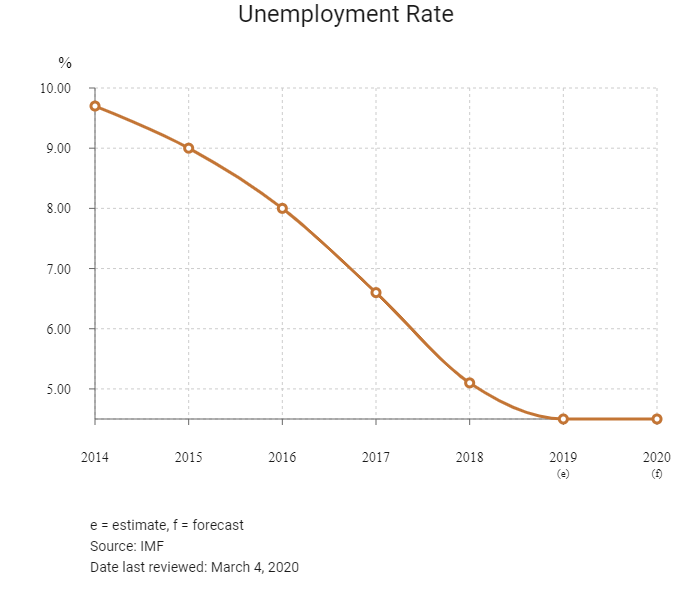 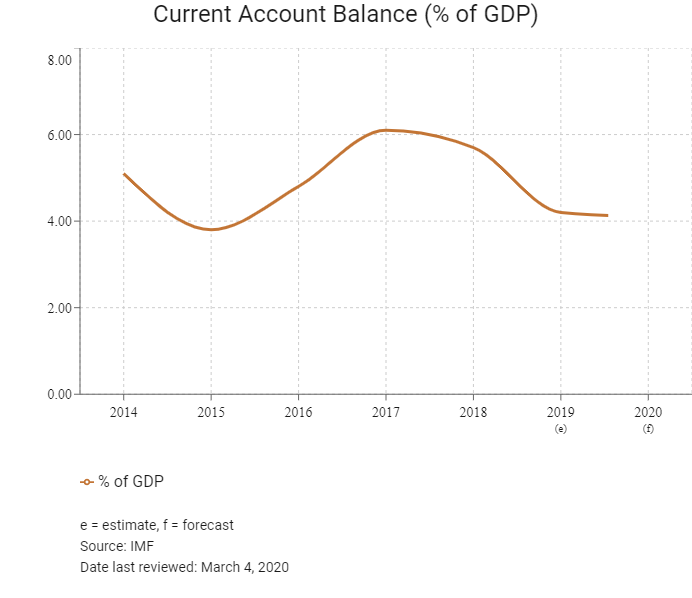 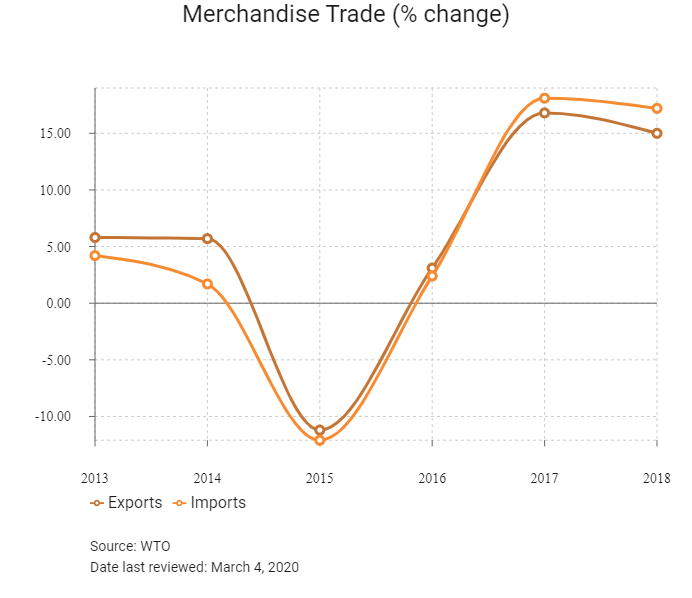 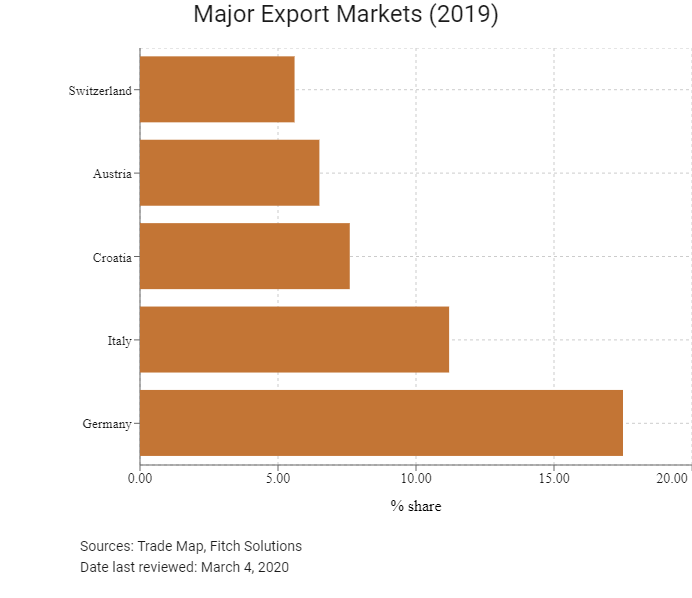 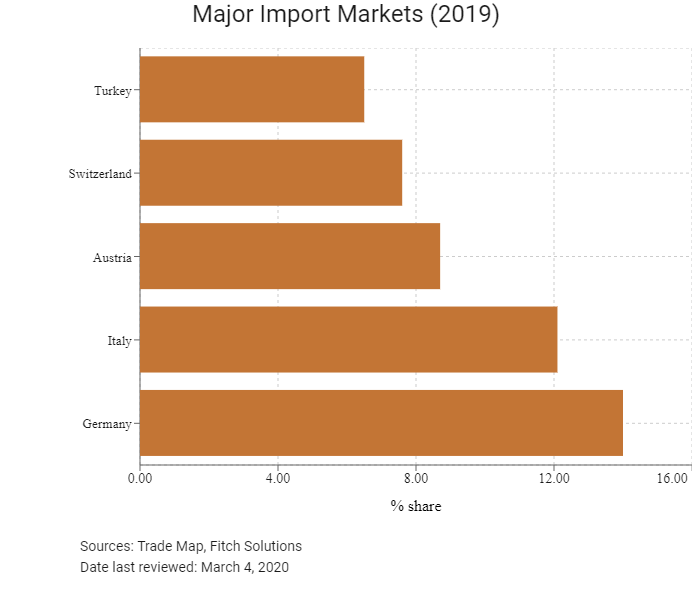 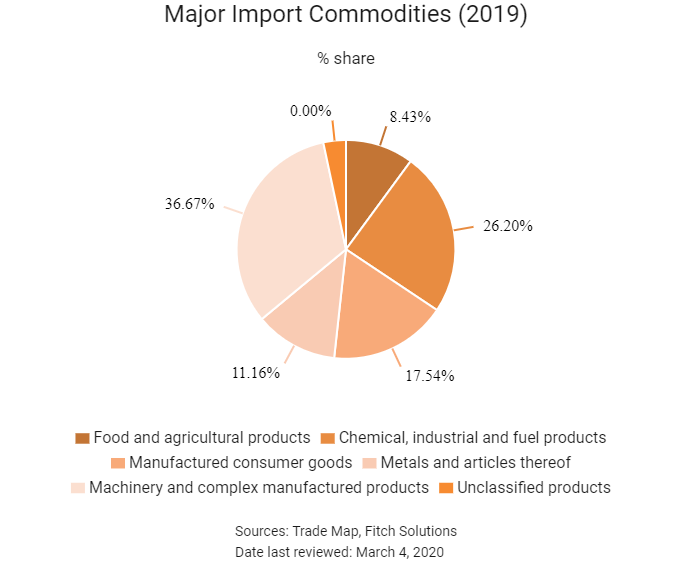 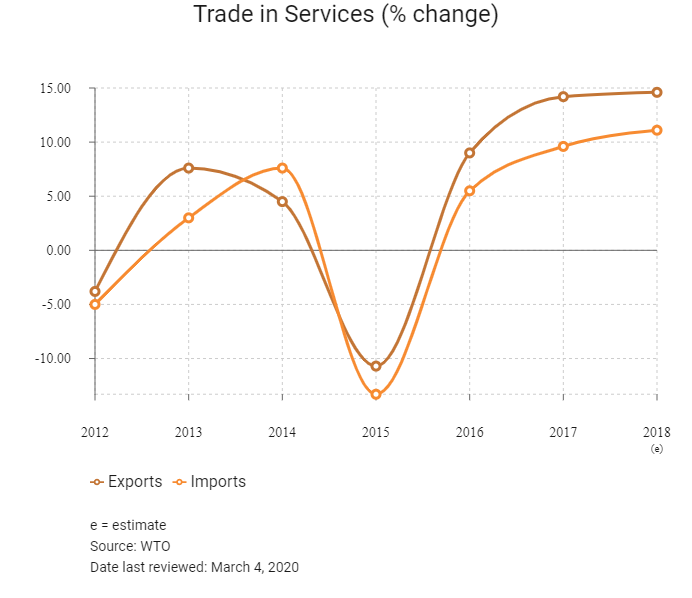 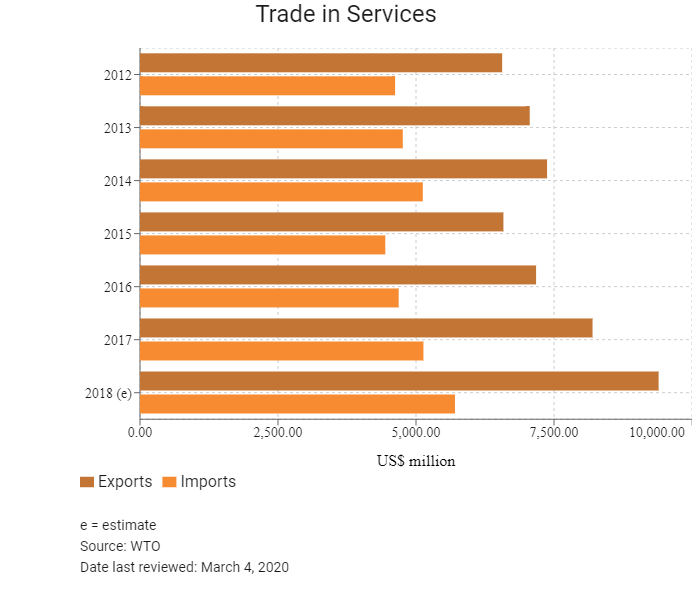 The Comprehensive Economic and Trade Agreement (CETA): CETA is an agreement between the EU and Canada. CETA was signed in October 2016 and ratified by the Canadian House of Commons and the EU Parliament in February 2017. However, the agreement has not been ratified by every European state and has only provisionally entered into force. CETA is expected to strengthen trade ties between the two regions, having come into eﬀect in 2016. Some 98% of trade between Canada and the EU will be duty free under CETA. The agreement is expected to boost trade between partners by more than 20%. CETA also opens up government procurement. Canadian companies will be able to bid on opportunities at all levels of the EU government procurement market and vice versa. CETA means that Canadian provinces, territories and municipalities are opening their procurement to foreign entities for the first time, albeit with some limitations regarding energy, utilities and public transport. 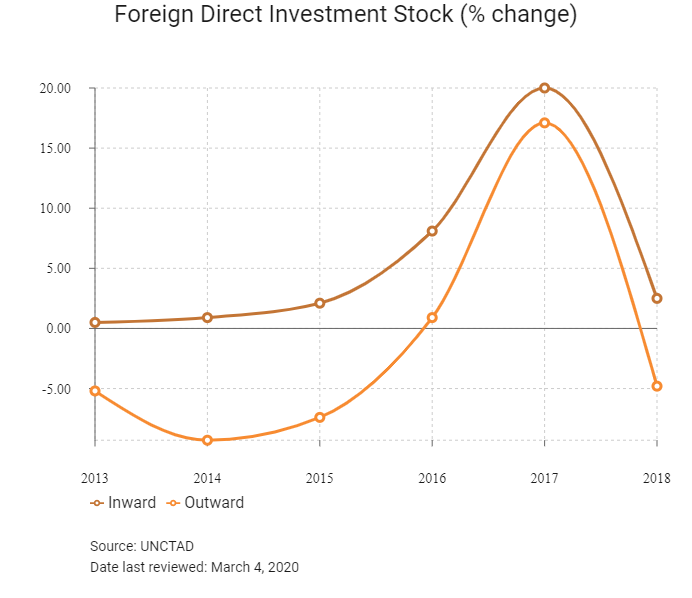 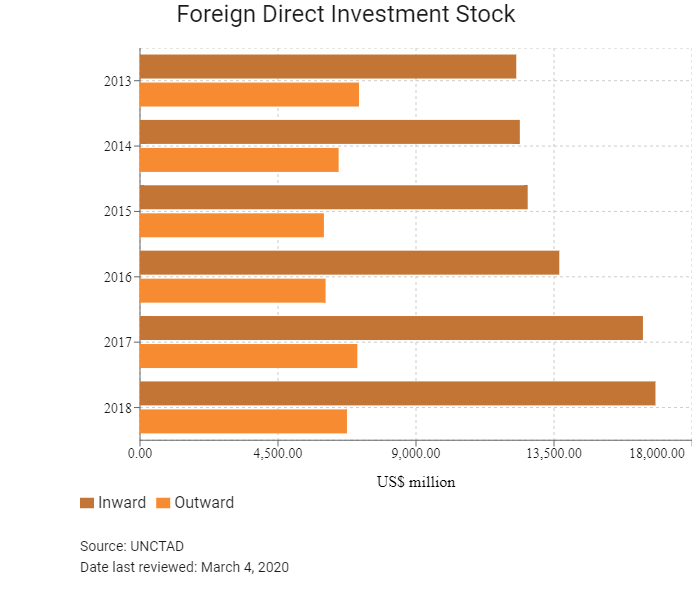 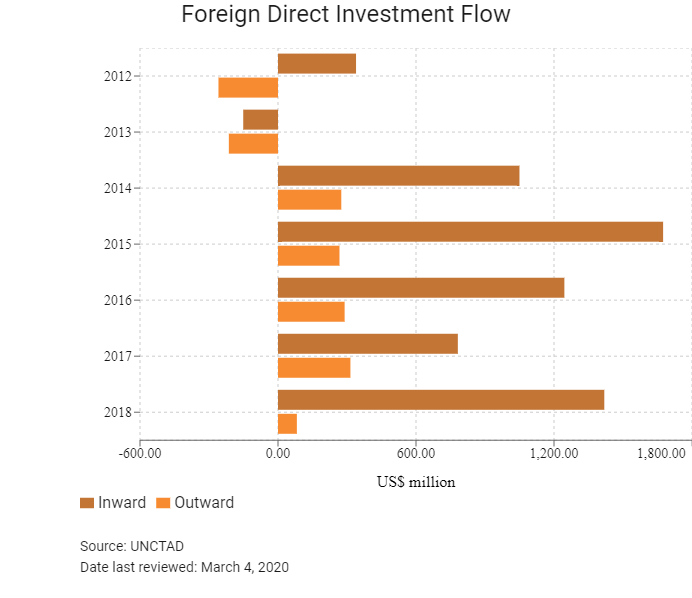 Source: Financial Administration of the Republic of Slovenia

Although the EEA and Swiss citizens do not require visas to work in Slovenia, they must apply for a residence registration certificate for stays longer than three months. Residents are eligible to apply for permanent residency after a period of five years of uninterrupted residence. When employing citizens of EEA countries and Switzerland, an employer is obliged to register the employment details to the Employment Service of Slovenia within eight days of starting a job. The EU Blue Card Regime makes it easier for highly skilled workers outside of the EEA to enter Slovenia.

Third country nationals in Slovenia are eligible to attend a free programme for the initial integration of immigrants that includes learning about Slovenian society and lessons in Slovene language. The length of the course varies acccording to the type of residence permit.

ECONOMIC RISK
Growth is projected to soften in 2020 on a continued slowdown in regional demand on the country's key export-facing manufacturing sector and rising external headwinds. Reduced absorption of EU funds and lower levels of capacity utilisation will constrain fixed investment growth, while the government’s tighter fiscal stance will drag on overall domestic demand. Private consumption should continue expanding at a healthy pace owing to a tight labour market and higher wages. Slovenia's long-term growth performance will remain dependent on the state’s ability to carry out difficult reforms aimed at addressing the challenges posed by an ageing population, skilled labour shortages and capacity constraints. Plans to increase financial sector supervision and regulation will assist anti-inflation policies and restrain unsustainable credit growth. As an open economy, Slovenia remains vulnerable to external shocks, such as the impact of global trade tensions and faltering regional demand.

OPERATIONAL RISK
Slovenia presents the most attractive business environment in South East Europe. The country’s most positive attributes stem from a positive performance in terms of crime and security risks. This includes the low risk of terrorism, interstate conflict or criminal threats for businesses and supply chains, and successful anti-graft campaigns. The country also benefits from a relatively well-developed and well-integrated transport network and utilities sectors. The main downsides are attributed to Slovenia’s increasing corporate tax rates and the country’s small and costly workforce, resulting in a highly uncompetitive market compared with other manufacturing-oriented states in the wider emerging Europe region. An ageing and declining population weighs on the country’s attractiveness as an investment destination. 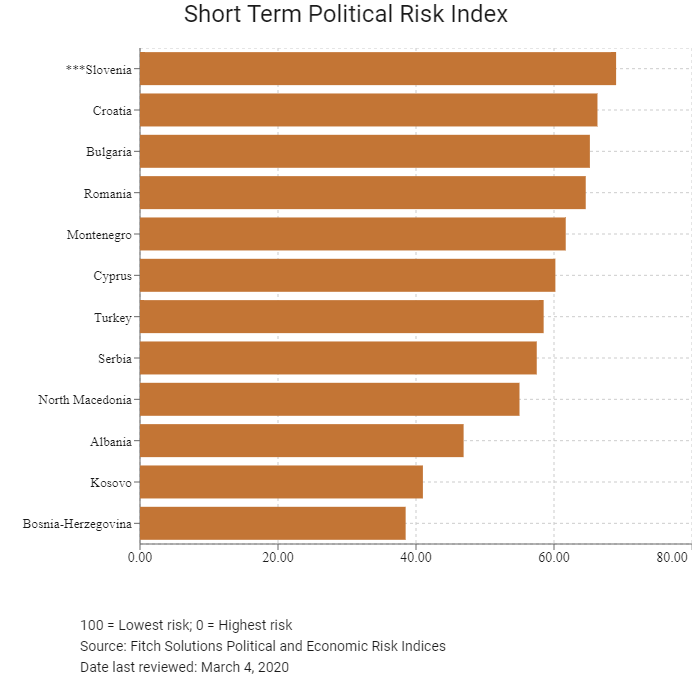 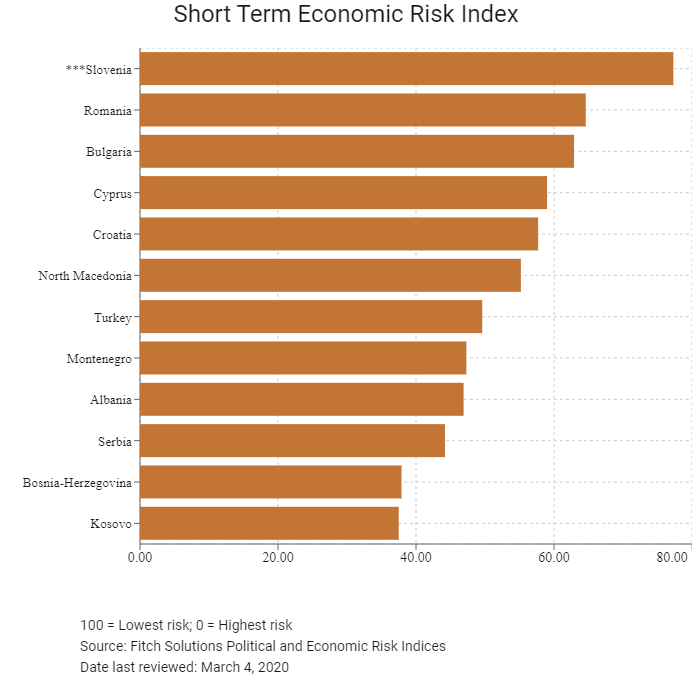 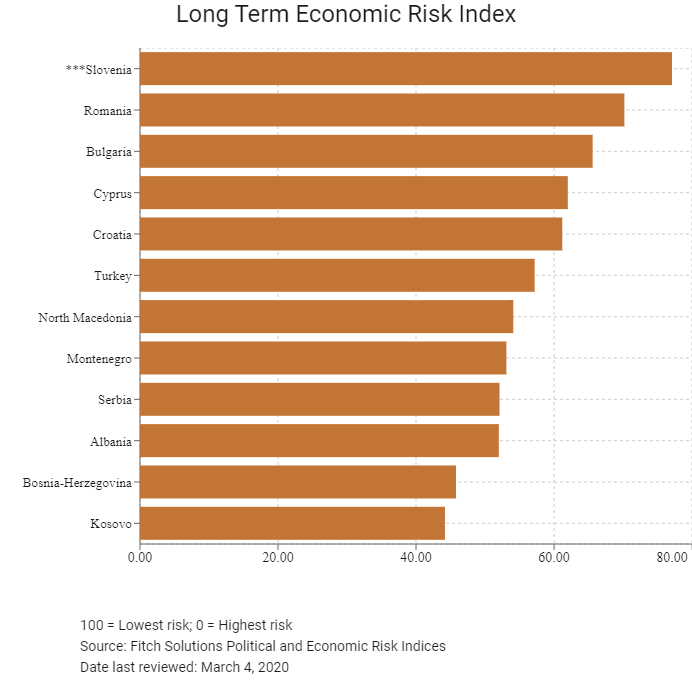 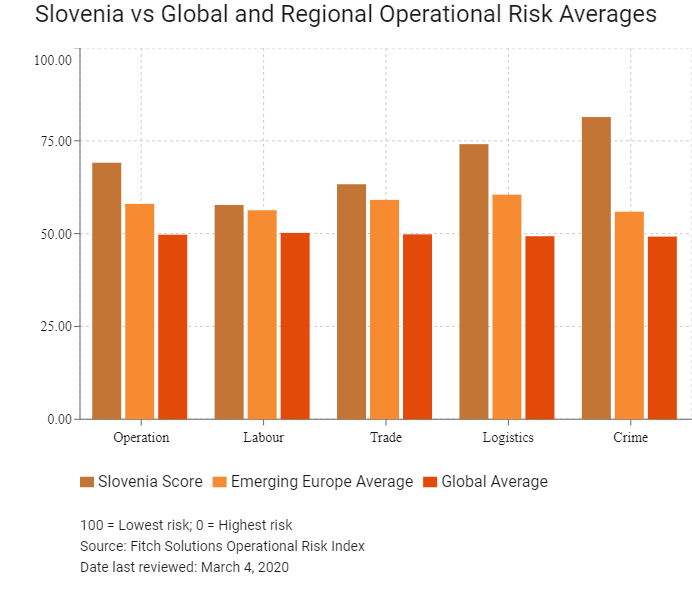 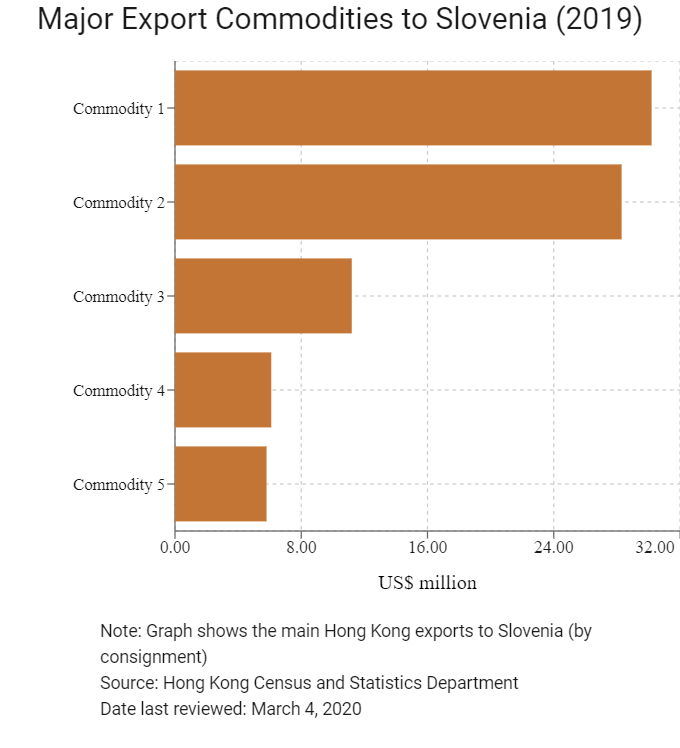 Treaties and Agreements between Hong Kong and Slovenia