While Pakistan's growth trajectory remains promising over the long term, underpinned by its large consumer and labour markets, a strong infrastructure development project pipeline and rising industrial sector, macroeconomic imbalances will remain significant over the short-to-medium term. The country's fiscal and current account deficits will prove to be significant drags on growth in the near term, despite some modest support provided by the significant and growing remittance inflows into the country. The improving but unpredictable security situation, difficult business climate, lengthy legal processes and challenging tax environment have contributed to lower overall growth and foreign direct investment inflows than its regional competitors. That said, the country will be in a good position to leverage its high working age population in the medium term in order to spur productivity growth provided that it is able to better manage its fiscal health and keep its public debt manageable.

November 2018
Pakistan's Executive Committee of the National Economic Council approved six development projects worth an estimated USD4.9 billion. The approvals include adding Tangir Hydropower in the Diamer-Bhasha dam and the Peshawar Sustainable Bus Rapid Transit Corridor Project, with completion of the latter expected in June 2019. Other approved schemes include a more than 750km transmission line project for power evacuation from the 870MW Suki Kinari Hydropower Project (HPP) in Khyber Pakhtunkhwa's Mansehra district, a 1.12GW Kohala HPP in the Muzaffarabad district of Azad Jammu and Kashmir (AJK) and a 590MW Mahal HPP in Bagh District in AJK. The Sind Solar Energy Project and rehabilitation of the Dargai hydroelectric power station in Malakand were also approved.

March 2019
The United Arab Emirates pledged to assist Pakistan via the transfer of USD2 billion to the State Bank of Pakistan (SBP). This followed the first tranche of USD1 billion committed by the UAE in January 2019.

May 2019
IMF agreed to a USD6 billion bailout package for Pakistan to be executed over a period of 39 months, subject to the timely implementation of prior commitments and confirmation of international partners’ financial commitments.

July 2019
A new renewable energy policy is under development, with the second draft version released in July 2019. In line with this policy, there are reports that the government plan to increase the share of renewable energy (excluding large-scale hydropower) to 30% by 2030.

October 2019
Pakistan was retained on the Financial Action Task Force (FATF) ’grey-list’ as the agency noted that the country acted on only five of the 27 recommendations on curbing terror financing. The FATF urged Pakistan to implement the remaining recommendations by February 2020.

November 2019
In late November 2019, the Sindh Energy department signed an agreement with various private firms to launch the Sindh Solar Energy Project. This will entail a 400MW solar park at Manjhand, 20MW rooftop solar systems on public sector buildings in Karachi and Hyderabad, and 200,000 solar home systems for remote areas in 10 districts of the province. The project is estimated to cost USD105 million.

December 2019
In December 2019, the Sindh government announced that they will launch Pakistan's first ever solar auctions for the 400MW solar park in District Jamshoro. A competitive bidding scheme to deploy solar PV plants in the province would be developed and piloted for the first 50MW in the first phase of this project.

The Central Development Working Party (CDWP) approved eight development projects totalling PKR31.4 billion (over USD202.8 million) in Pakistan. The first phase for the provision of electricity for the Dhabeji Special Economic Zone (SEZ) was approved by the CDWP. The scheme aims to facilitate electrification of 220kV Dhabeji grid station to supply 250MW power under the applicable regulatory rules of the National Electric Power Regulatory Authority. A scheme, which includes physical planning and housing sanitary sewerage system as well as a water treatment plant for Gilgit City, was sanctioned at a cost of PKR3.4 billion. The CDWP also approved the Khyber Pakhtunkhwa Revenue Mobilisation and Public Res­ource Management Programme and the construction of a centre for artificial intelligence in health sciences. The CDWP also recommended three projects, worth PKR40.22 billion, to the Executive Committee of National Economic Council for consideration.

March 2020
A relief package worth PKR1.2 trillion was announced by the federal government on March 24, 2020. Key measures include: elimination of import duties on emergency health equipment; relief to daily wage workers, cash transfers to low-income families, accelerated tax refunds to the export industry and financial support to small businesses and the agriculture sector in the form of relief on electricity bill payments, bank lending support, as well as subsidies and tax incentives. The economic package also earmarks resources for an accelerated procurement of wheat, financial support to utility stores, relief in fuel prices, support for health and food supplies, electricity bill payments relief, an emergency contingency fund and a transfer to the National Disaster Management Authority (NDMA) for the purchase of necessary equipment to deal with the pandemic.

In addition, the authorities have launched a programme for the construction sector to address the acute employment needs generated by the lockdowns, which include a special tax regime and no wealth declaration for projects launched during a short window until the end of 2020.

May 2020
The federal government in coordination with provinces had partially eased the lockdown since April 15, by allowing ‘low-risk industries’ to restart operation with newly developed Standard Operating Procedures (SOPs). A further relaxation of lockdown started on May 9, allowing several industrial units and small retail shops to reopen in phases using proper SOPs. On May 18, the Pakistan Supreme Court ordered shopping malls and markets to reopen across the country. Domestic flights and train services have resumed limited operations, while educational institutes were expected to restart starting July 15. 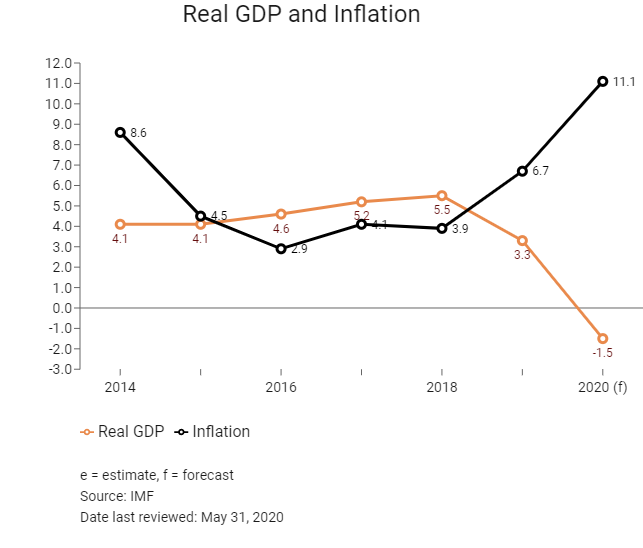 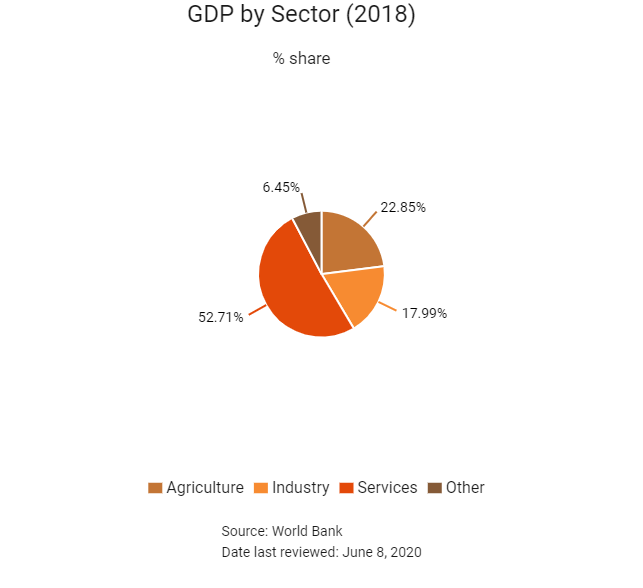 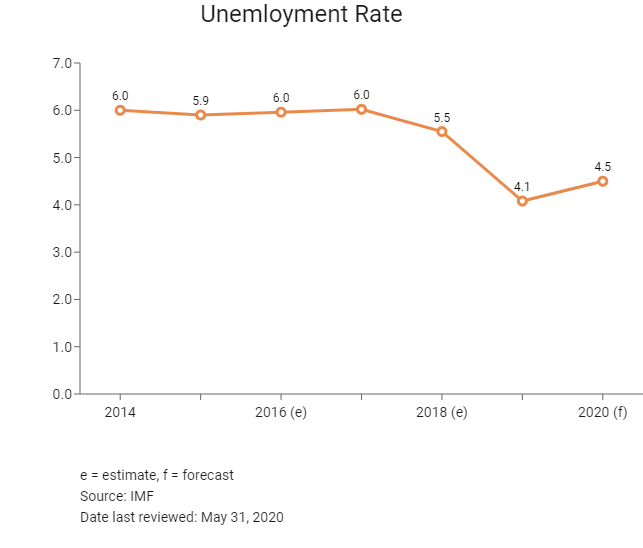 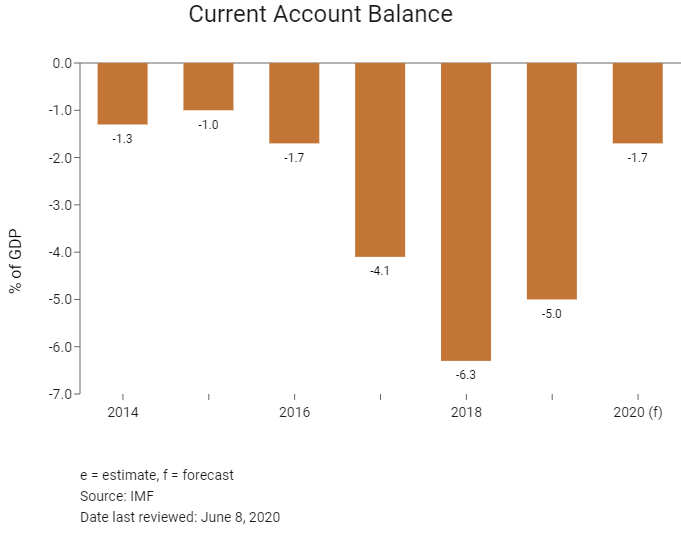 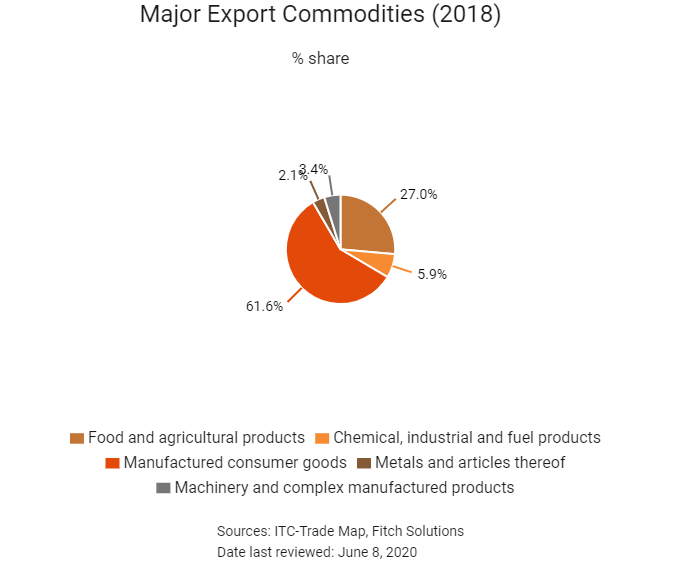 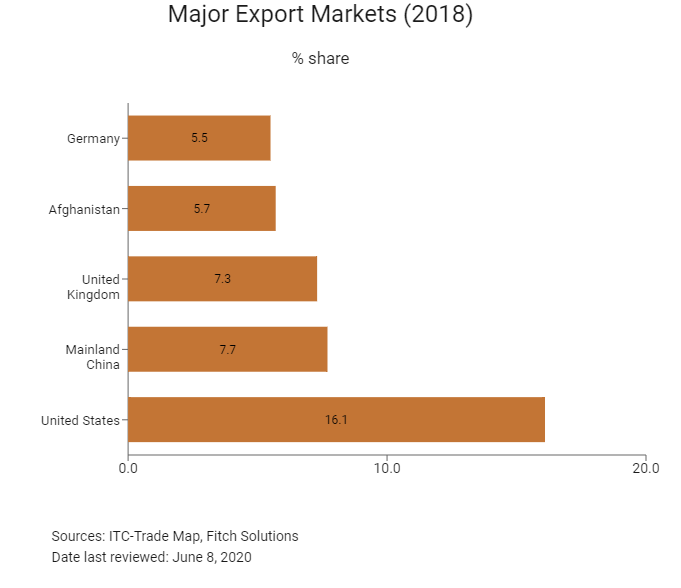 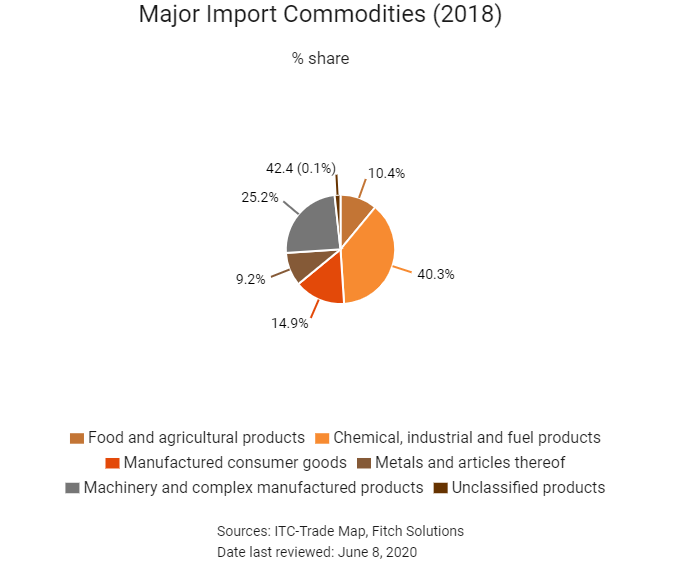 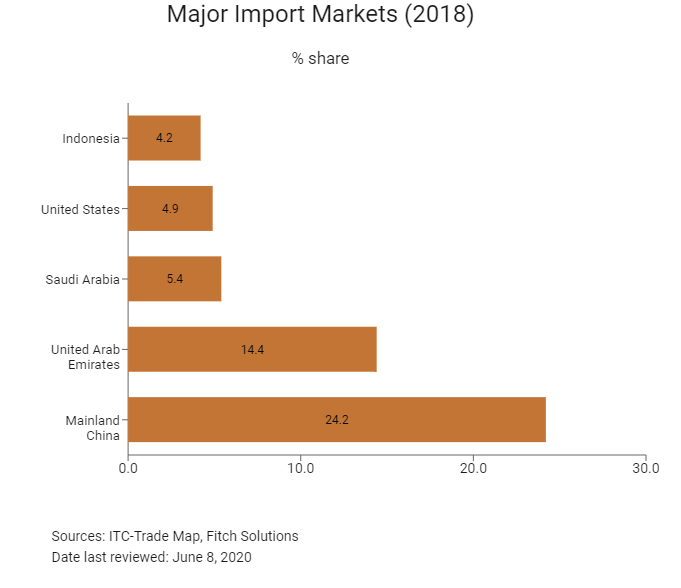 In September 2018, Pakistan and Turkey sought to revive negotiations on a free trade agreement (FTA). In March 2019, the governments of Pakistan and Turkey entered into a strategic economic framework for the enhancement of bilateral relations in trade, tourism, healthcare, hospitality, industry, education, housing, agriculture, aviation and banking. 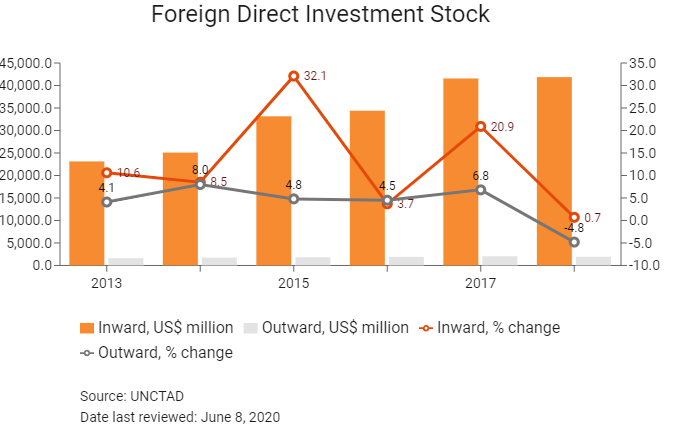 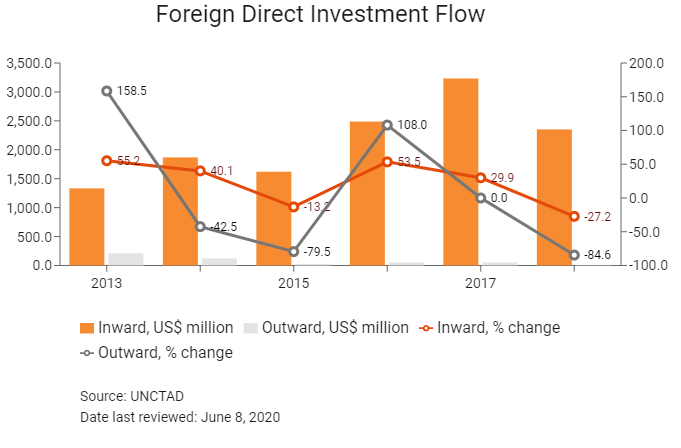 Source: Federal Board of Revenue, Government of Pakistan

Pakistan does not mandate specific performance requirements for foreign entities operating in the country. There is no requirement to hire local workers at any grade or have local representation on the company's board of directors. Technical and managerial personnel working in sectors that are open to foreign investment are not required to obtain special work permits. Work visas for technical and managerial personnel are granted for one year and can be extended on a yearly basis.

A work visa is required unless a visa abolition agreement exists between Pakistan and the employee's country of origin, subject to the approval of the Board of Investment Pakistan. The process of obtaining a visa and work permit for foreigners in Pakistan is lengthy, taking an average of two months, and is bureaucratically complex. Bureaucratic steps include providing proof of departure, residency status, a copy of the applicant's driving licence and the completion of a Global Service Order Form. Working visas are also expensive, though the cost varies depending on whether it is a single or double entry (up to around USD295) visa or a multiple entry visa for one (USD565), two (USD565) or five years (an estimated USD1,250). However, 37 countries worldwide do not require a working visa in Pakistan, including Mainland China, Uganda, South Africa and Iran. No visa exemptions apply to European countries or major Western economies. Pakistan also issues fast-track business visas with five years' validity to businesspeople of 69 countries on the business visa list.

Weak infrastructure and high risk of violence and instability will dent recruitment prospects in the near term. Foreign workers will likely demand higher hardship and danger pay in order to take on the risk of working in the country. Security costs will remain elevated and businesses must employ private security companies to protect their personnel.

Note: Moody's put the rating under review on 14 May 2020, but this does not imply a ratings change.
Sources: Moody's, Standard & Poor's, Fitch Ratings

ECONOMIC RISK
Growth is set to return in FY 2021, as domestic demand expands following the pandemic-influenced downturn in FY 2020. However, uncertainty regarding the full extent of the pandemic poses significant downside risks to the outlook, with the impact on the external sector and debt levels highlight key near-term risks. In Q220, Moody’s placed its B3 rating under review for downgrade due to growing concerns about the serviceability of Pakistan’s private-sector debt obligations amid severe economic and financial shocks. That said, ongoing reforms should support growth in the years ahead. Pakistan’s wide twin deficits, financing requirements and tensions with India pose additional risks to the near term outlook. Textiles account for most of Pakistan's export earnings; however, gaps in logistics infrastructure hamstring expansion in heavy industries and other energy-intensive sectors, such that the country is considerably exposed to shifts in global demand. The International Monetary Fund’s bailout package of USD6 billion will help the country in combating its challenge of reducing the fiscal deficit and infuse cash into its economy. Looking ahead, Pakistan will be in a position to reap its demographic dividend of a large working-age population provided it is able to keep its current account deficit in check, expand investment, and work in areas of enhancing electricity production.

OPERATIONAL RISK
Legal risks and regional security challenges will continue to impede development and social stability in the medium term. The country's logistics infrastructure is underdeveloped and overstretched, such that there are frequent interruptions to supply chains as a result of acute energy and water shortages. Looking ahead, the medium-to-long term growth of the country will benefit from the implementation of the Mainland CPEC, which will provide much-needed stimulus to the economy and improve infrastructure capacity in the long run, contingent on significant progress being made in terms of economic reforms and improving the current security landscape. 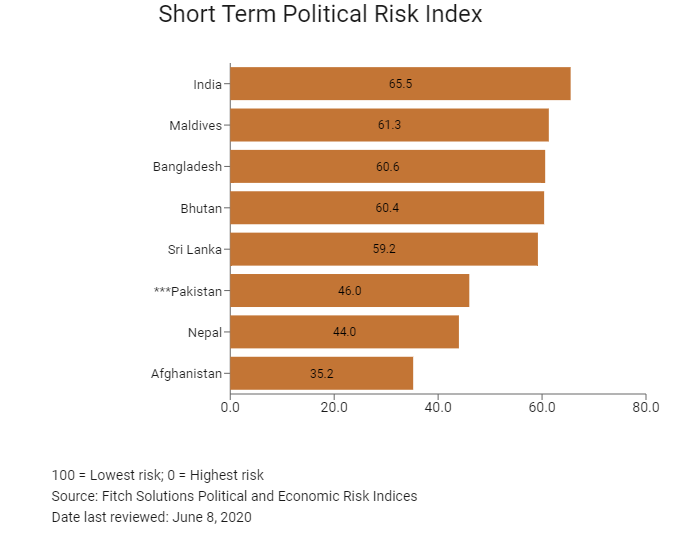 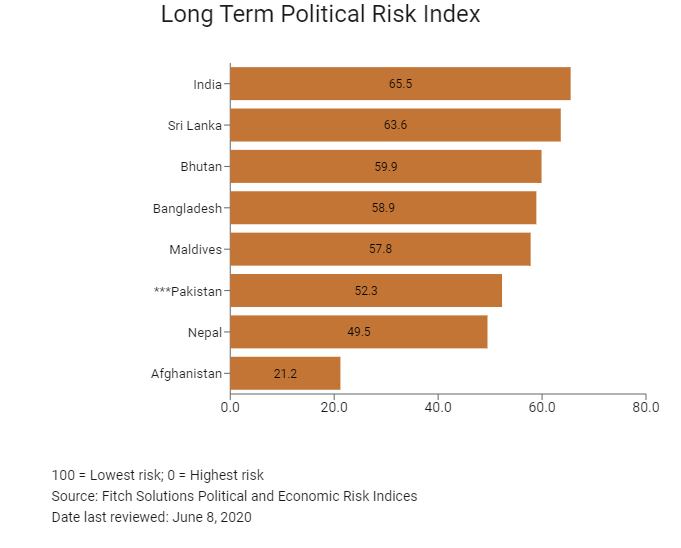 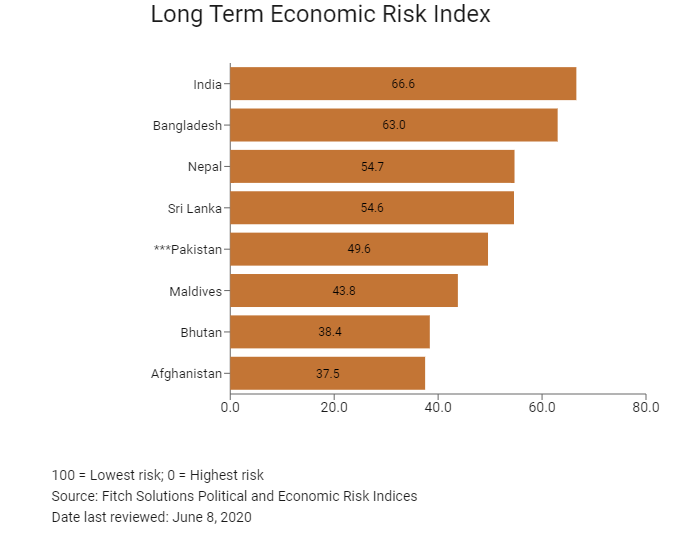 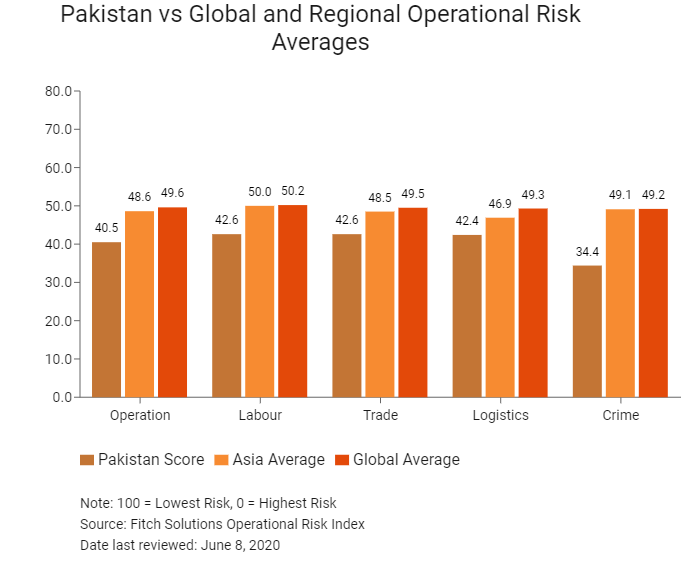 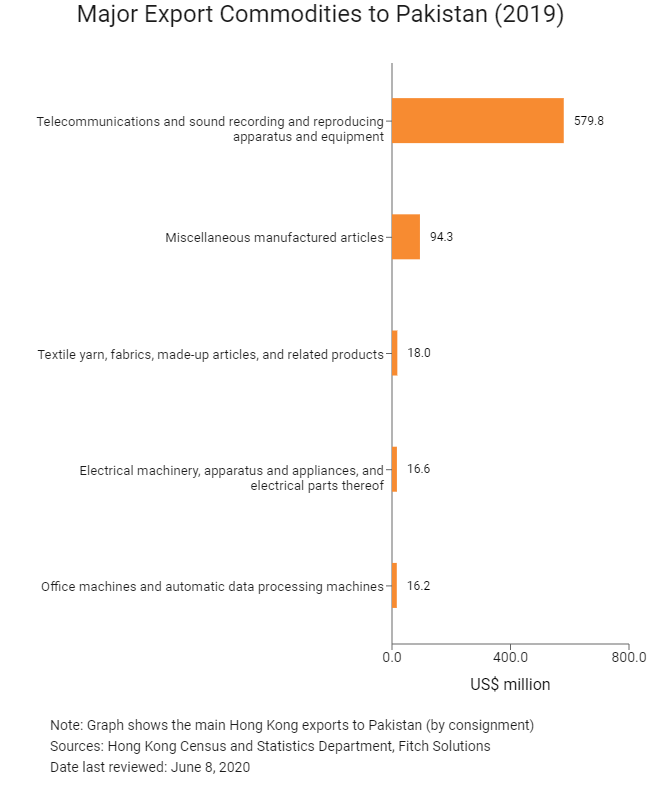 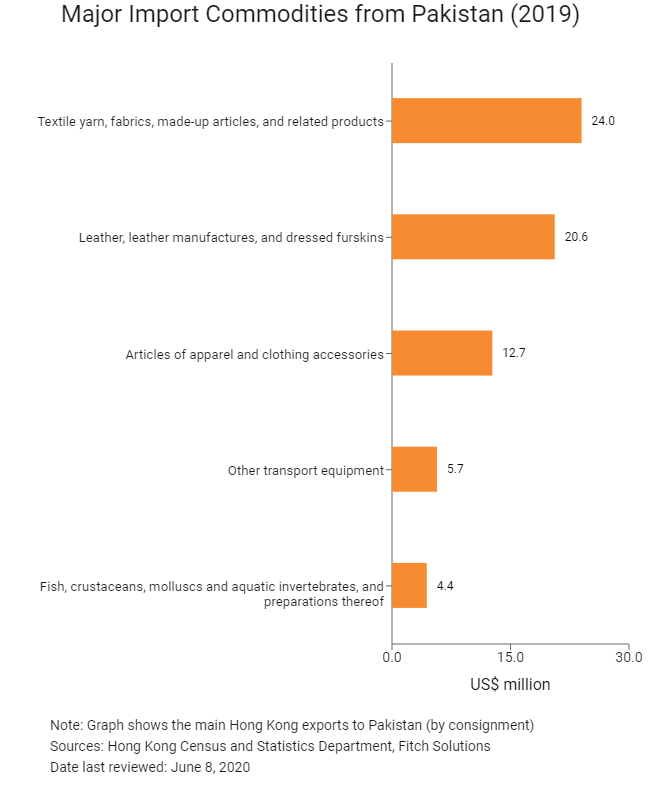 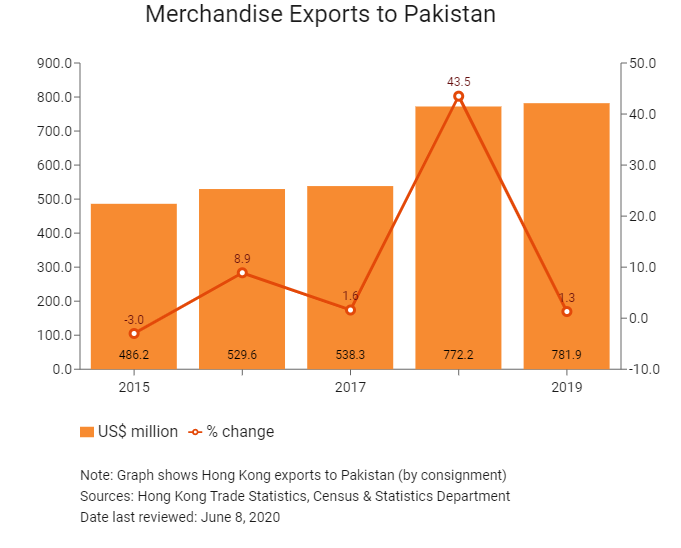 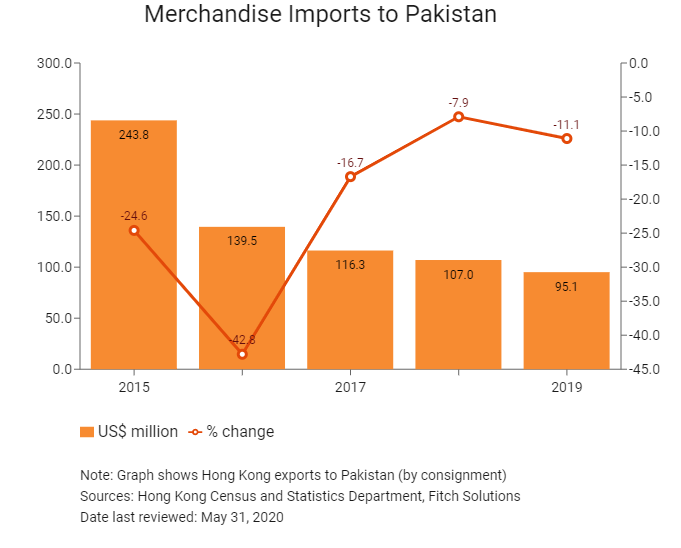 Treaties and Agreements between Hong Kong and Pakistan

Hong Kong and Pakistan have a Double Taxation Avoidance Agreement which came into force on November 24, 2017.

HKSAR passport holders require a visa to visit Pakistan. The cost for Hong Kong residents to acquire a visa stands at HKD600.