Ethiopia has one of the fastest growing economies in the world, and the its location gives it strategic dominance as a business and manufacturing hub in the Horn of Africa region as it is close to the Middle East and its markets. Ethiopia is landlocked and has been using neighbouring Djibouti's main port for the last two decades. Improving relations between Ethiopia and its regional neighbour Eritrea bode well for businesses in both countries. In particular, improved bilateral relations could give landlocked Ethiopia access to maritime routes through the Eritrean seaports of Assab and Massawa for international trade. Ethiopia's huge population of more than 102 million people makes it the second most populous nation in Africa, and the Abiy Ahmed-led government aims to reach lower middle-income status by 2025 by implementing the second phase of its Growth and Transformation Plan (GTP II). GTP II, which will run to 2020, aims to continue work on physical infrastructure through public investment projects and to transform Ethiopia into a manufacturing hub. Ethiopia's main challenges are sustaining its positive economic growth by diversifying its economy and strengthening drought resilience, mechanisation and value addition in agriculture, which will help accelerate poverty reduction. Important measures have been taken to address birr overvaluation, large external imbalances, foreign exchange shortages and rising external debt in recent quarters.

October 2018
The Ethiopian government announced 17 infrastructure projects which it intends to develop using public-private partnership contracts. The projects are all in the power and transport sectors, and comprise five hydropower plants, eight solar projects and three roads, with a total value of approximately USD7 billion.

February 2019
The Ethiopian cabinet ratified the country's membership to the African Continental Free Trade Area (AfCFTA) on February 4, 2019. AfCFTA technically entered into force on May 30, 2019.

April 2019
State Grid Corporation of China (SGCC) signed a USD1.8 billion investment deal to provide electric power transmission and distribution lines to Ethiopia. The works would help supply power to up to 16 industrial parks, the Addis Ababa to Djibouti second railway line and four different cities in the country.

Mainland China and Ethiopia have also signed agreements including a financing agreement for the development of a plaza and 12km of the Beautifying Sheger river bank project. The agreements cover the provision of grants for technical cooperation and food aid, a Belt and Road Initiative five-year cooperation plan and a memorandum of understanding operationalising cooperation under the Forum on China–Africa Cooperation.

June 2019
In June 2019, Ethiotel and Djibouti’s state-owned incumbent Djibouti Telecom agreed to utilise their fibre-optic railway infrastructure between Addis Ababa and Djibouti City to boost their respective broadband capabilities. The two countries are also planning greater collaboration in areas such as telecoms service interconnection and roaming.

May 2020
Parliamentary elections will be held in Ethiopia in 2020.

January 2020
Ethiopian Airlines announced plans to invest USD5 billion to build a new airport in Bishoftu, south east of Addis Ababa. The new airport would be located 70km from the existing Bole International Airport in the capital Addis Ababa. It was expected to be built over an area covering 35sq km of land. When completed, it would be able to accommodate nearly 100 million passengers annually.

March 2020
Ethiopia's electoral body, the National Election Board of Ethiopia postponed the August 2020 presidential and parliamentary elections due to the Covid-19 outbreak.

April 2020
On April 30, the Council of Ministers approved a new set of economic measures to support firms and employment amid the Covid-19 pandemic. These include forgiveness of all tax debt prior to 2014/2015, a tax amnesty on interest and penalties for tax debt pertaining to 2015/2016-2018/2019, and exemption from personal income tax withholding for four months for firms who keep paying employee salaries despite not being able to operate due to Covid-19. Furthermore, a broader set of measures including further support to enterprises and job protection in urban areas and industrial parks was under discussion with the donor community but has not been formalised. 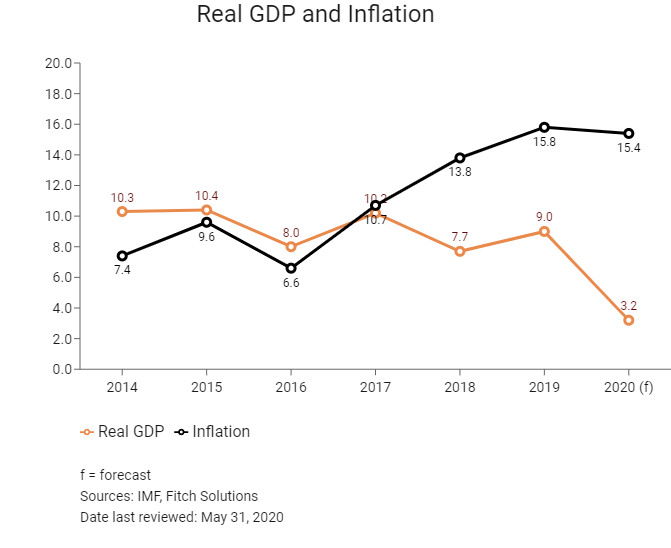 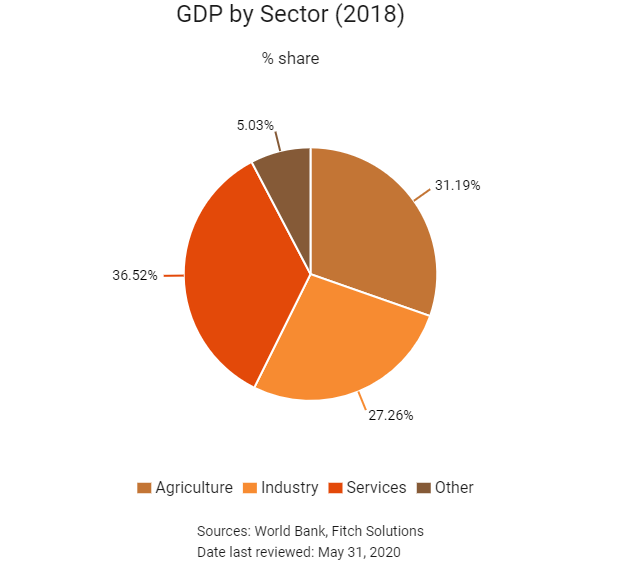 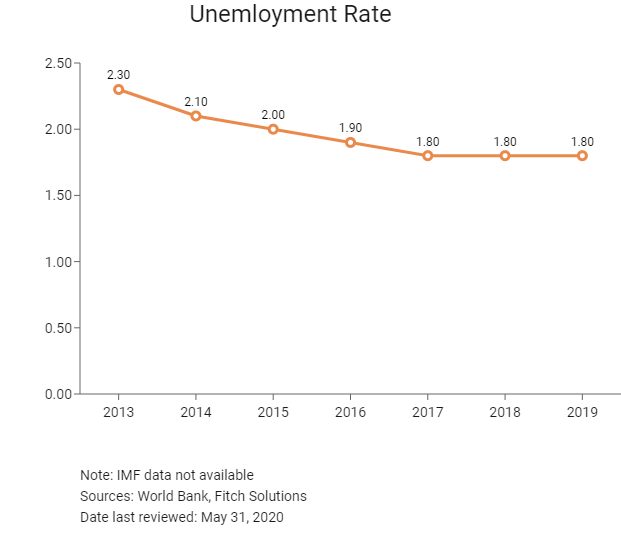 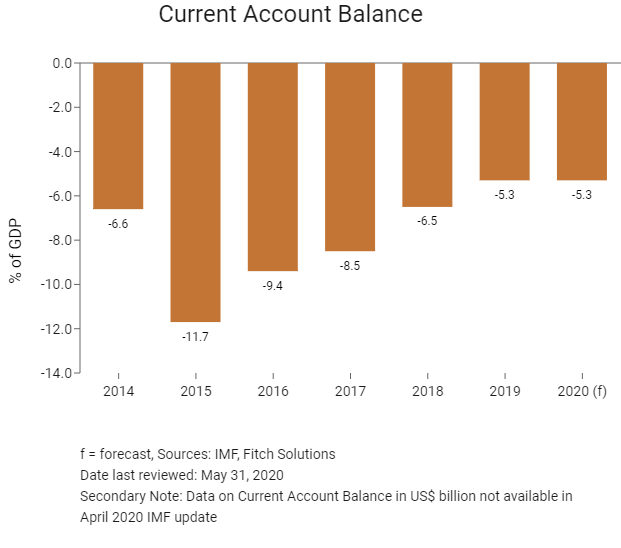 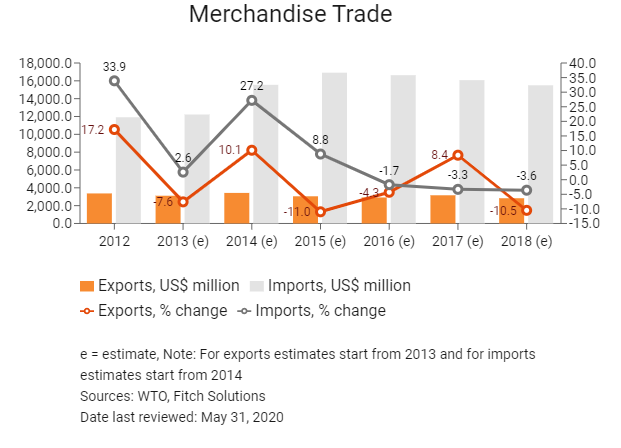 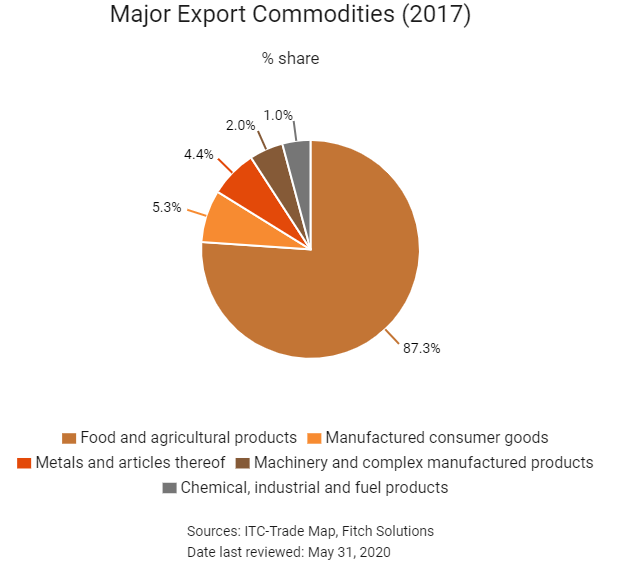 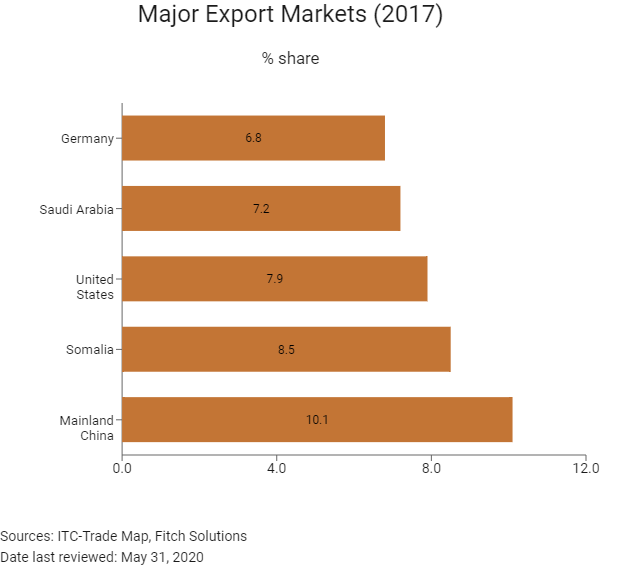 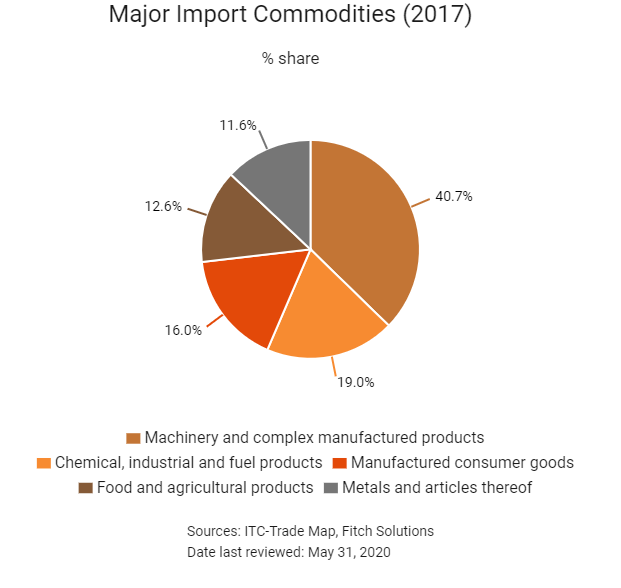 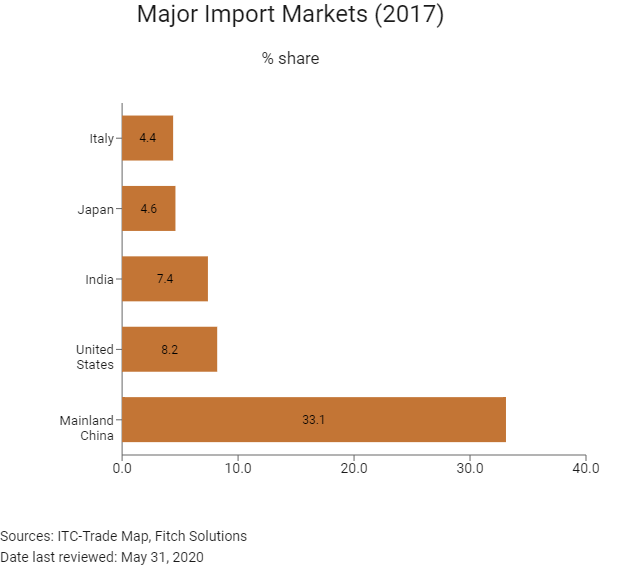 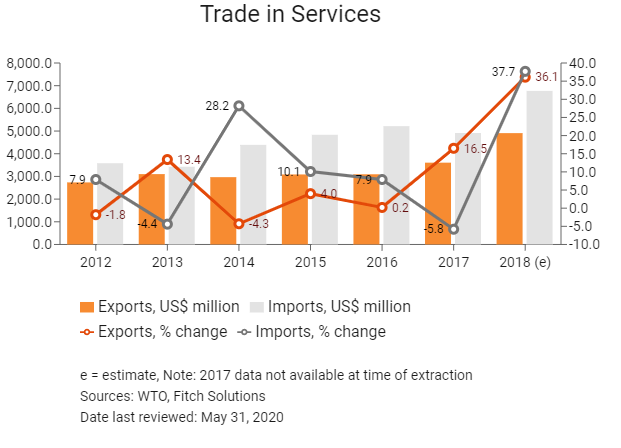 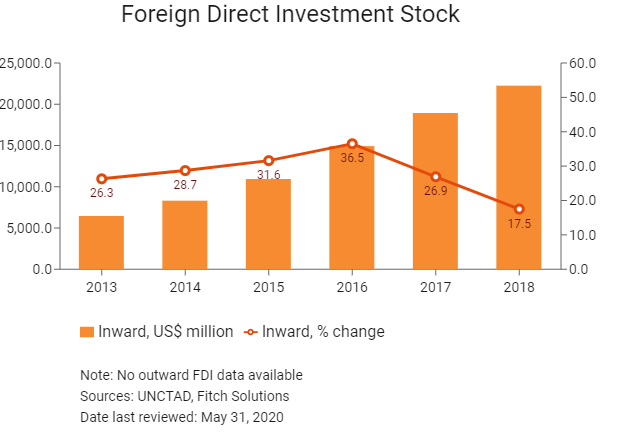 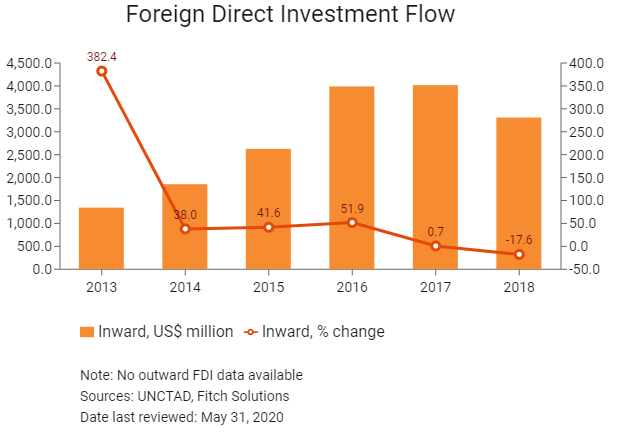 Companies encounter few barriers when hiring expatriate workers. All foreigners wishing to engage in employment in Ethiopia are required to obtain a work permit, which will be granted if the employer can prove that the job cannot be performed by a local.

Expatriates and work permit visas may be secured via an application to an Ethiopian diplomatic or consular mission abroad. The eligibility criteria for obtaining a work permit are set by the Ethiopian Ministry of Labour and Social Affairs. The requirements may differ depending on the type of organisation that intends to hire the expatriate worker or depending on the type of permit sought (for example, a new work permit, renewal of an existing permit or clearance for a permit). A work permit for expatriates working for a foreign investor upon submission of an investment permit is issued by the Ministry of Labour and Social Affairs. Spouses and children are entitled to stay in the country on special passes, the validity of which depends on the corresponding work permit.

Only citizens of Djibouti and Kenya can travel visa free to Ethiopia. Forty countries, including South Africa, the United States, Canada, Australia, India and Mainland China, are issued visas on arrival that are valid for up to three months. Most other African, Middle Eastern and Latin American countries require visas before arrival.

ECONOMIC RISK
The Ethiopian economy will remain on a strong growth trajectory over the next few years despite internal political challenges. With the country's sizeable population, improving logistics and low electricity prices, the country will increasingly position itself as a regional manufacturing hub over the next decade. However, economic growth will slow to a two-decade low in 2020 as a result of the global Covid-19 pandemic. Uncertainty regarding how long it will take to contain the global Covid-19 pandemic is the largest risk to Ethiopia's economy. Another risk is the ramp up in government debt that will occur in 2020 as the government increases spending to support the economy. The debt burden has risen quickly over the past few years, and this could be exacerbated by the large amount of government-guaranteed debt held by public enterprises.

OPERATIONAL RISK
Ethiopia is one of the most attractive investment markets in East Africa and one of the brightest stories emerging in Sub-Sahara Africa on account of its vast investment opportunities, driven by infrastructure-led growth, reforms to the business environment, a large pool of available labour and abundant natural resources. The country has second largest population in Africa, which underlines immense opportunities for consumer-facing businesses. However, Ethiopia is currently operating well below potential and is constrained by its underdeveloped infrastructure, limited access to credit, over-reliance on foreign aid and a largely low-skilled labour pool. In addition, Ethiopian businesses are exposed to regional insecurity, particularly the threat of terrorism in the Horn of Africa and violent inter-ethnic tensions. 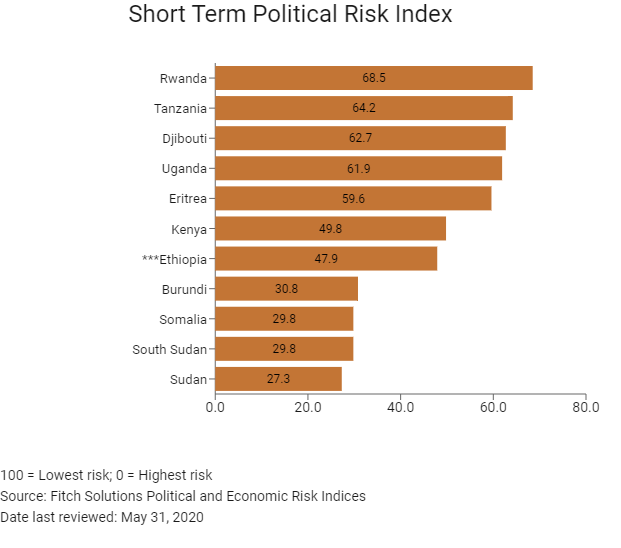 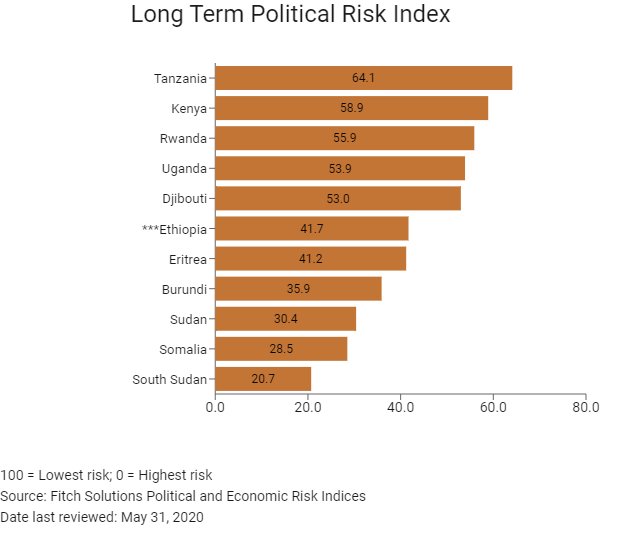 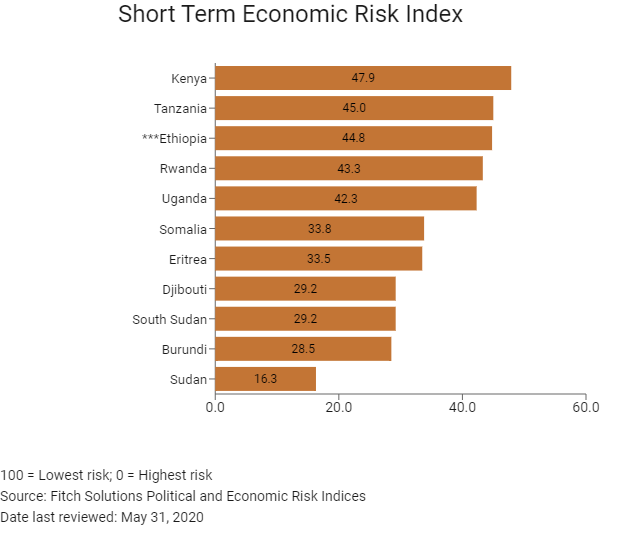 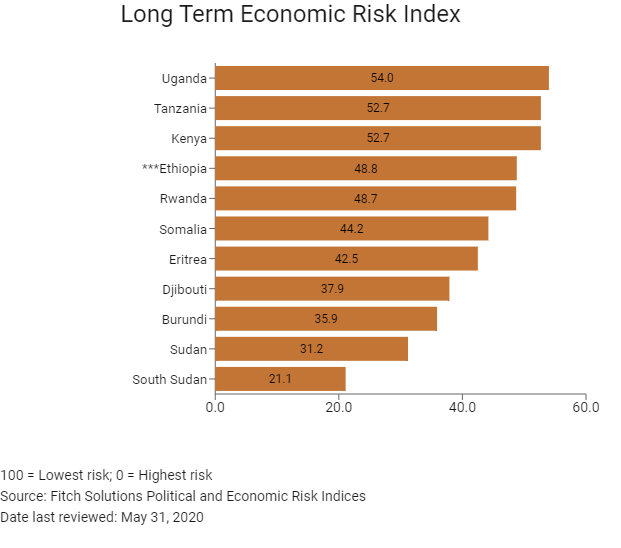 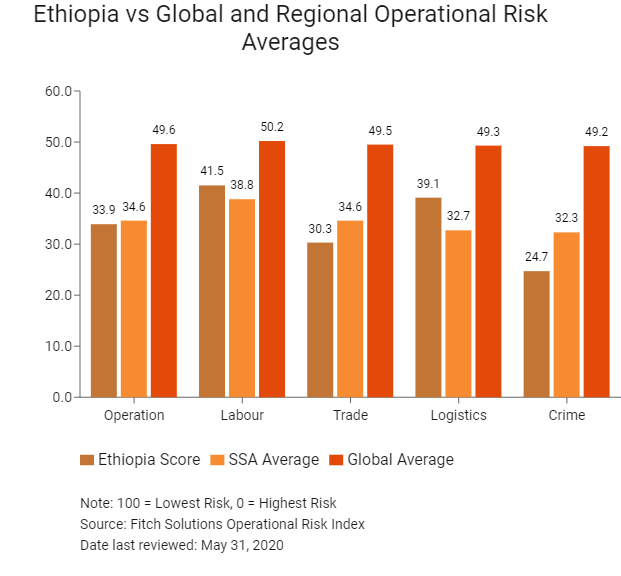 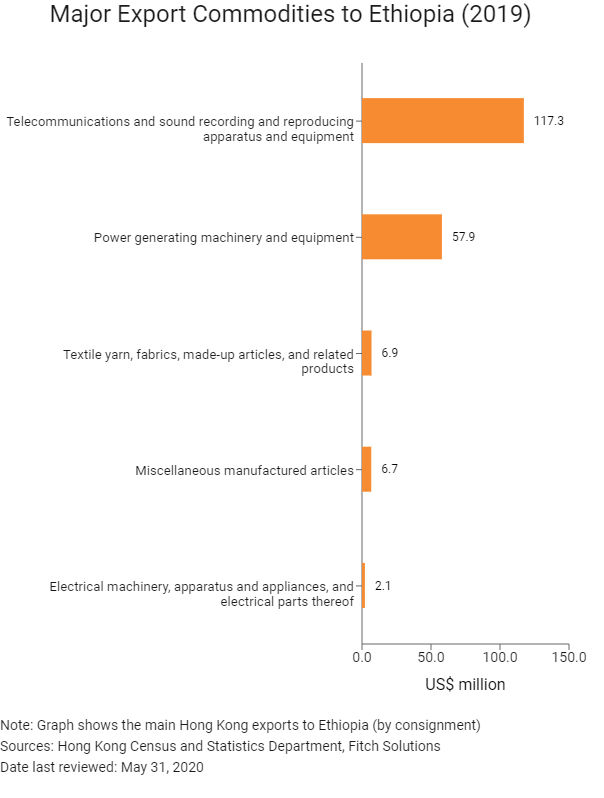 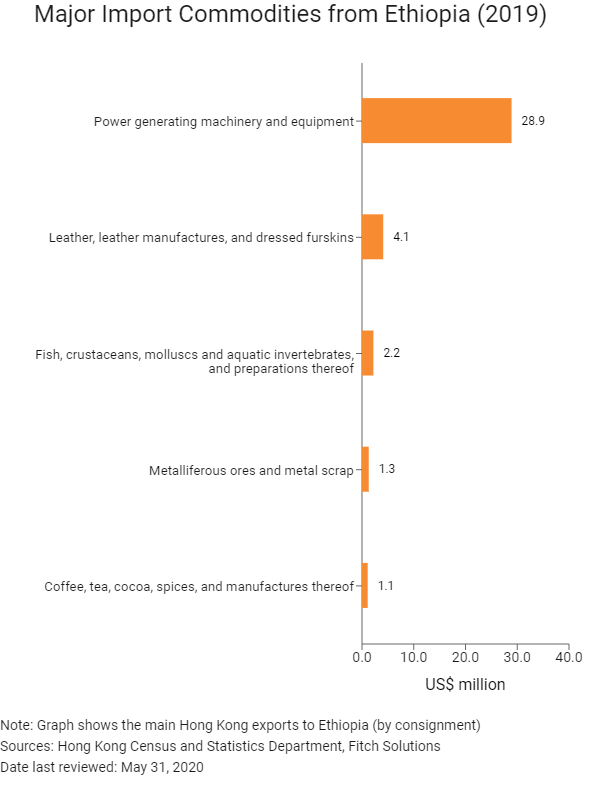 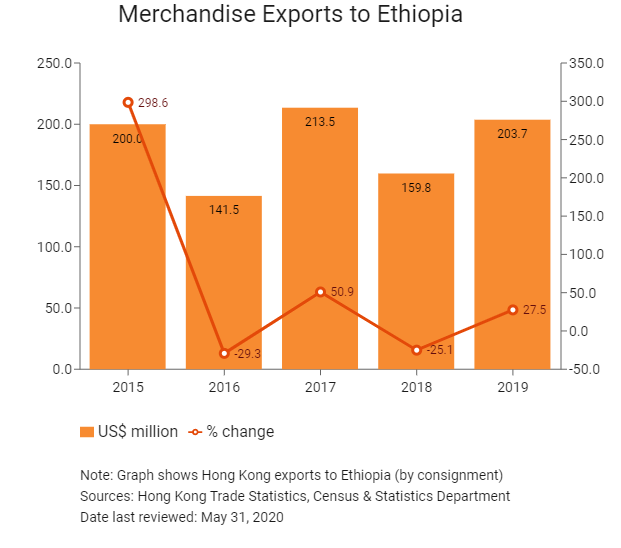 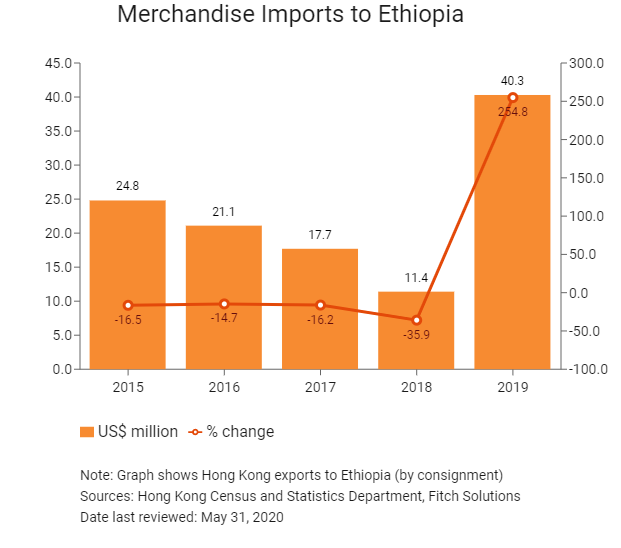 Treaties and Agreements between Hong Kong and Ethiopia

Hong Kong residents may obtain a tourist visa valid for up to three months on arrival at Addis Ababa (Bole) International airport, at a cost of approximately USD52 for one month and USD72 for three months. To get a visa on arrival, travellers need to also have two passport photographs. In June 2018, Ethiopia launched an 'e-visa'. This allows Hong Kong residents to easily apply for tourist visas (more visa categories will be added in future). All other categories of visitors must get a visa from the Ethiopian Embassy closest to their place of legal residence before travelling.