Oil has been the main force behind economic growth in Bahrain, accounting for more than 70% of GDP and 80% of government revenue. While the hydrocarbons sector remains the dominant industry in Bahrain, continuing efforts to boost trade growth and industrial diversification bode well for the economy in the medium-to-long term. Bahrain is looking to increase efforts to expand the renewables sector over the coming decade in order to curb an increasing gas import reliance. Non-oil industrial development is still at an early stage, but the country’s strong logistics profile and supportive industrial policies may provide a base for stronger manufacturing growth and less reliance on oil revenue. The Bahraini government's development plan for the country's future, Economic Vision 2030, is based on three guiding principles: sustainability, fairness and competitiveness. The Economic Development Board has led a programme of co-ordinated economic and institutional reform intended to transform Bahrain from a regional pioneer to a global contender. The ultimate aim of the plan is to ensure that every Bahraini household has at least twice as much disposable income in real terms by 2030.

November 2018
The EDB and FinTech Consortium announced the launch of Bahrain FinTech Bay, which was the largest dedicated fintech hub in the Middle East and Africa.

November 2018
A high-level business delegation organised by the EDB conducted a nine-day visit to Mainland China. The long-term aim was to strengthen economic and trade ties between the two countries.

November 2018
Parliamentary and municipal elections held on November 24, 2018, were notable for greater participation of women and youth candidates. Turnout was reportedly 67%, which is up from the 53% reported at the last elections in 2014.

February 2019
The government published consultancy tenders for the Bahrain Metro project, having completed a feasibility study. The metro project included the introduction of driverless trains, cover 109 kilometres via six lines and had the capacity to transport 43,000 passengers an hour.

April 2019
Bahrain formalised the October 2018 agreement with Kuwait to support the Bahraini economy and King Salman of Saudi Arabia travelled to the state to discuss regional developments. The agreement related to a five-year USD10 billion pledge of financial aid package from Kuwait, Saudi Arabia and the United Arab Emirates (UAE) to rescue Bahrain from a potential debt crisis, partly caused by interruptions to oil output.

May 2019
Eagle Hills Dayar signed a finance agreement worth USD374 million with a syndicate of banks from the UAE and Bahrain for the construction of a shopping complex dubbed 'Marassi Galleria' and two hotels in Bahrain.

October 2019
A new 207,000sq m passenger terminal building at Bahrain International Airport was slated to open in March 2020. The BHD414.1 million (USD1.1 billion) project is being built by a joint venture of Arabtec and TAV Construction. The new terminal is expected to boost the capacity of the airport to around 14 million passengers annually.

March 2020
Bahrain announced its plans to launch a tender for the King Hamad Causeway project, which would connect Bahrain with Saudi Arabia, in 18-24 months. The project comprised a 25km road and rail offshore section adjacent to the existing King Fahad Causeway and a further 25km rail-only section.

May 2020
To contain the rapid spread of Covid-19, the authorities launched an USD11 billion stimulus package in effort to provide the private sector with short-term relief against virus-related disruptions to business activity. The stimulus package was largely composed of liquidity injections and also includes exemptions for businesses on industrial land rental and municipal fees for three months. 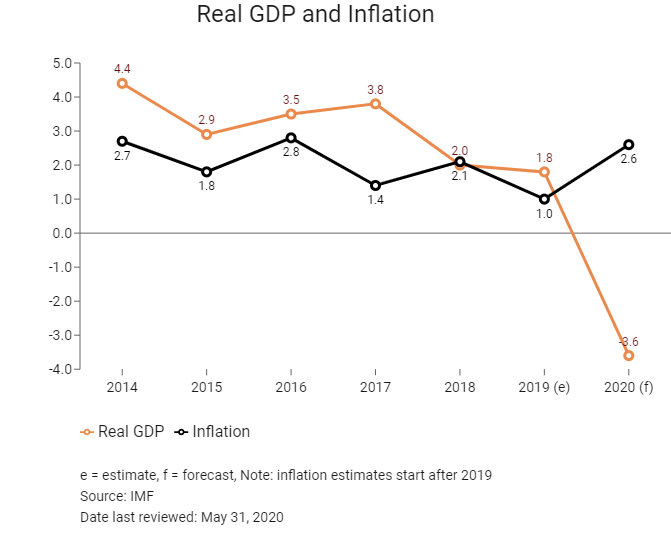 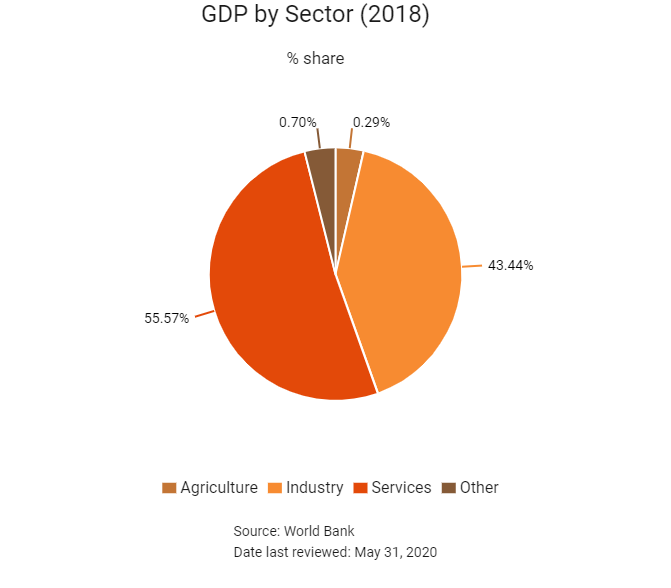 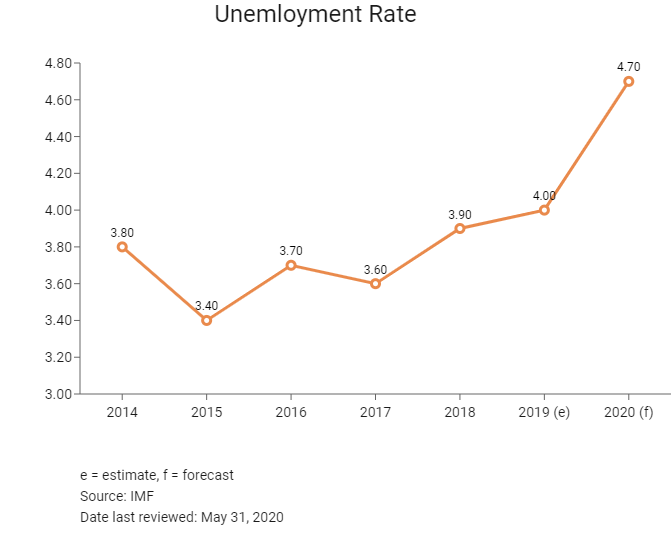 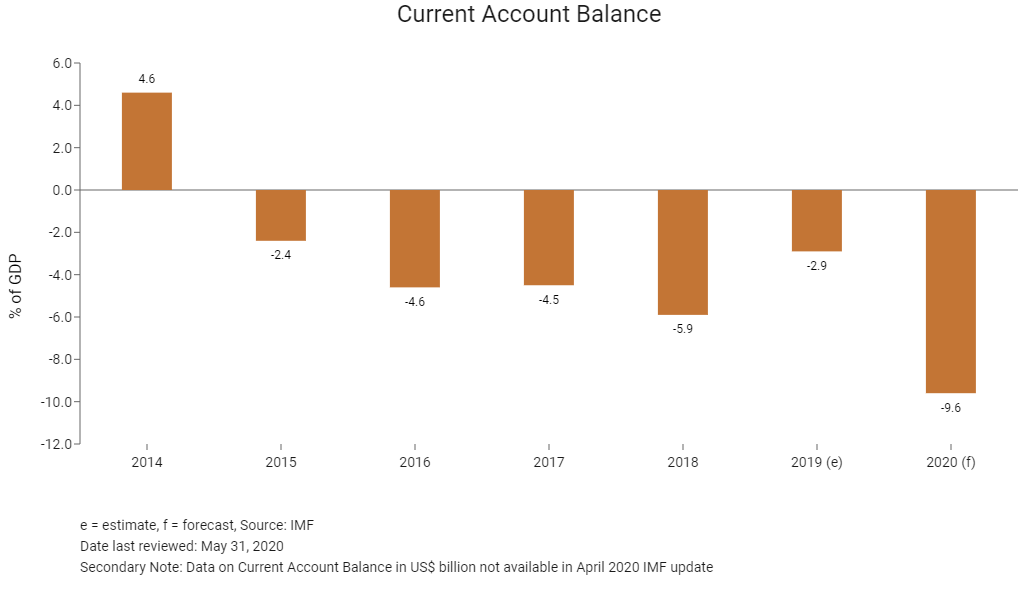 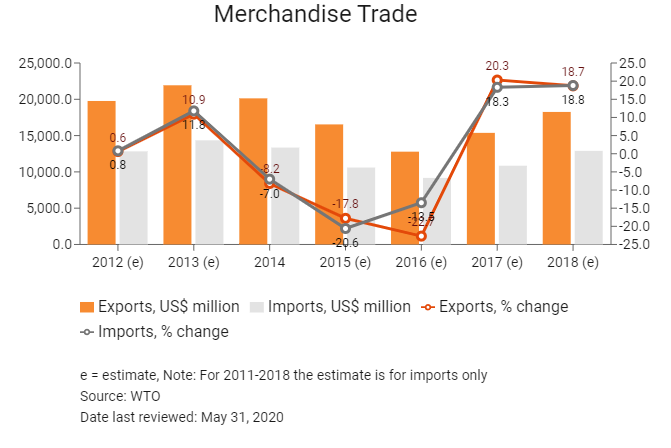 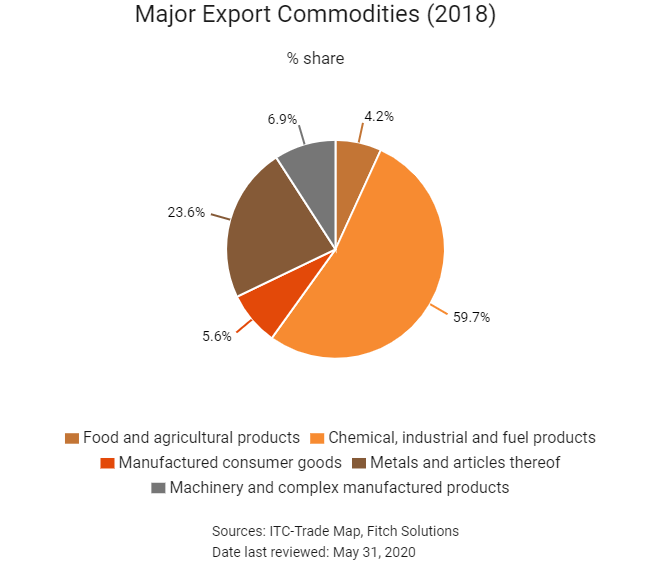 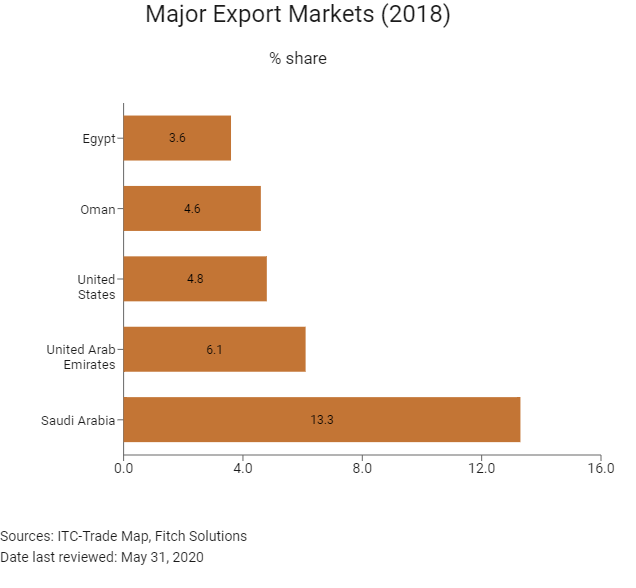 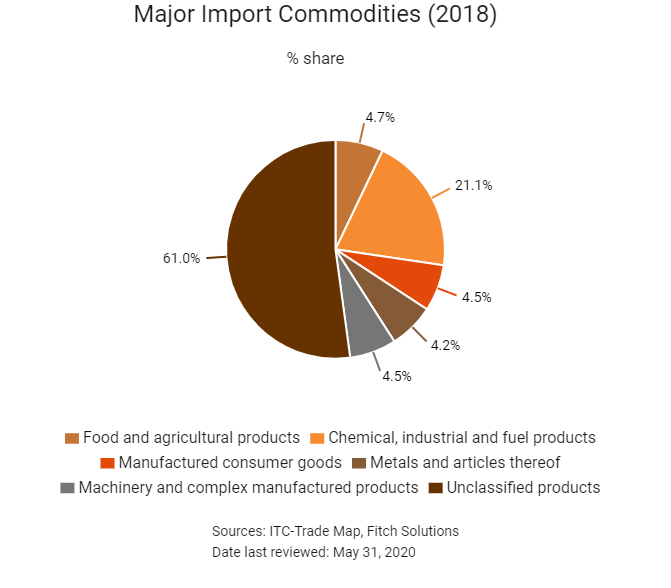 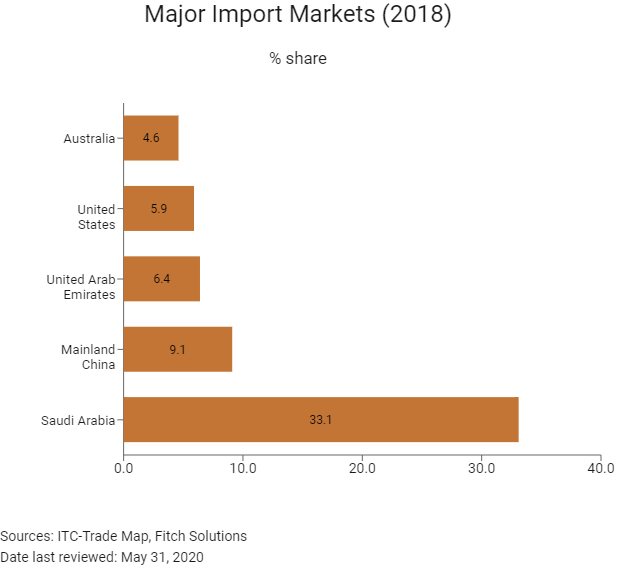 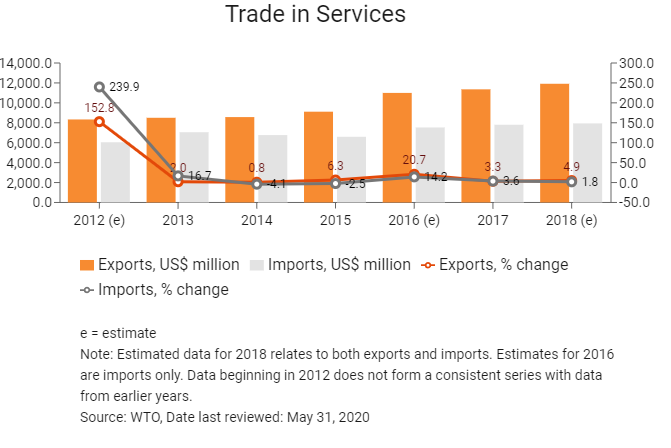 Japan-GCC FTA: This agreement will seek to reduce tariffs and the liberalisation of services trade and investment. Japan mainly imports aluminium, natural gas, liquid natural gas and petroleum products from the GCC, while Japan mainly exports electronics, vehicles, machinery and other industrial products to the GCC.​​​​​​​ 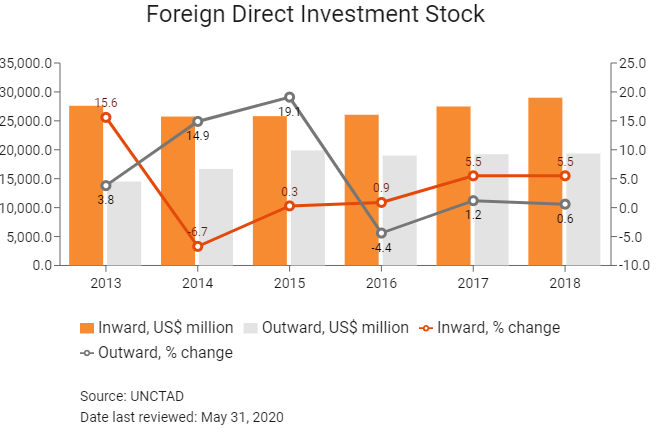 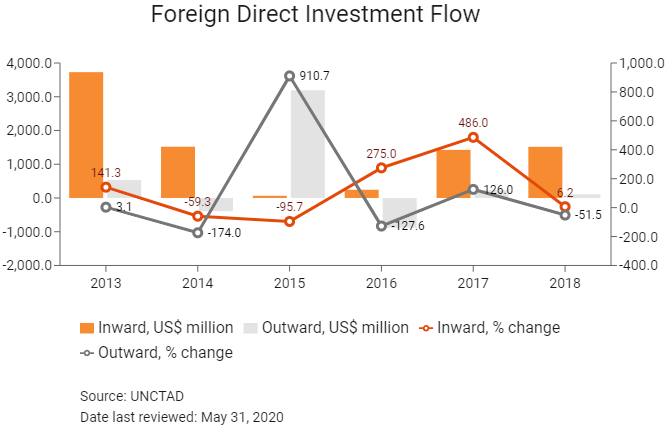 Bahrain began to implement VAT as of January 1, 2019, in line with some GCC peers. The GCC unified VAT and excise treaties outlined that a uniform VAT standard rate of 5%, with some limited exceptions, will be applicable when each GCC member state implements VAT and that the implementation had to take place before January 1, 2019. The mandatory threshold for businesses in Bahrain has been set at BHD37,500, which will be adjusted up in June 2019.

All foreign workers – except for GCC nationals – require a work permit to work in Bahrain. In general, if all the paperwork is correctly submitted and the foreign worker has a company willing to sponsor them and pay additional fees, then this process is not exceptionally time consuming or costly. The Labour Market Regulatory Authority regulates the granting of work visas to foreign nationals wanting to work in Bahrain. A work permit may only be obtained once the applicant has a formal letter of an offer of employment from an employer in Bahrain, which must be submitted with the work permit application. Reforms enacted in August 2017 mean that a 'flexible' work permit can now be applied for that does not link a foreign worker to one particular sponsor and enables a foreign worker to have multiple employers for a period of up to two years. This should improve the availability of labour in the kingdom, but the cost of such permits is high.

The Bahraini government is attempting to increase the employment of its citizens in the private sector. This is known as the Bahrainisation policy and employers have to pay fees in order to obtain employment visas for their foreign employees. Currently, the fee for a two-year employment visa is BHD200. All public and private companies are required to pay a monthly levy with respect to each expatriate that is employed. The levy is charged at a rate of BHD5 per employee for the first five expatriate employees and BHD10 for each expatriate employee thereafter. Since January 2015, an additional fee of BHD72 for health insurance when issuing or renewing a visa for an expat has been introduced. This fee may not be applicable if the employer provides compulsory health insurance for the employee.

Businesses are expected to prioritise the employment of Bahraini nationals. Some sectors have various ratios of local to foreign worker numbers with which they must comply. The Bahraini public sector has been one of the larger employers of Bahraini nationals in the past, but with state revenue significantly decreased, the government is enforcing stronger compliance of its Bahrainisation policy in order to account for the shortfall. This is demonstrated by the recent proposal by Bahrain's parliament to make amendments to Article 11 of the 2010 Civil Service Law, which stipulates who is eligible to hold a government job. The proposal is to have 100% Bahrainisation in the public sector. This includes all companies in which the Bahraini government owns a majority stake (51% and above). Some members of parliament called to have all expats currently holding public sector positions replaced by Bahrainis by October 2019. Longer-serving members of parliament have suggested that replacement take place over a four-year period to allow for adequate skills transfer. On implementation, firms in the public sector will not be able to hire foreign workers, limiting their skills and production potential in the future. The online Bahrainisation Calculator enables employers to check if they meet the minimum threshold for the employment of Bahrainis in their establishment.

All business visitors to Bahrain who are not nationals of other GCC states need to obtain a visa to visit the country. This can be done on arrival or in advance. Although visitors to the country who have stamps in their passports from Israel will experience less trouble when attempting to enter Bahrain than in other Gulf States, it is up to Bahraini officials to determine whether that visitor is permitted to enter the country.

Bahrain claims to have the most flexible visa policies in the region, with residence permits easy to obtain for anyone establishing a company in the country. A visa on arrival can be issued to citizens from 67 countries and 114 nationalities are eligible for online visas.

The Bahraini labour authorities strictly regulate female participation in the workplace for various cultural and religious reasons. In certain cases, women are not allowed to work at night (determined on a case-by-case basis) and the labour authority is allowed to prohibit certain types of work for women.

In 2009 Bahrain announced that it would begin dismantling the sponsorship system known as the kafala system that governs foreign labourers. Bahrain established the Labour Market Regulatory Authority and said that new legislation would permit migrant workers in Bahrain to change employers without their employer's consent. However, while the system has been improved, in practice it is still difficult for migrant workers to change employers. For example, an amendment that was made in 2011 – in response to recruitment agencies lobbying against the changes – means that a worker needs to wait one year before legally being able to change to a new employer. This means that it may be easier for employers to recruit foreign workers from outside Bahrain rather than recruit from the country's large pool of migrant workers.

The implementation of a VAT and tighter government finances will weigh on private consumption and fixed capital formation; however, the effects will soon dissipate. Growth is expected to moderate in the near term owing to constrained government spending and weaker household spending growth, while volatile oil prices cloud the outlook. Nonetheless, financial support from Gulf allies, the completion of Alba’s Line 6 expansion project and continued infrastructure spending will underpin growth. Bahrain's heavy reliance on regional peers such as Saudi Arabia and the United Arab Emirates as key export markets is a vulnerability, as these markets are highly exposed to fluctuations in crude prices. Economic growth will likely accelerate in 2020 owing to support from the country’s Gulf allies, the expansion of the non-oil sector and low interest rates. Moreover, the commencement of operations at Bahrain’s first LNG regasification terminal should provide the energy sector with some impetus, although potential sharper OPEC+ production cuts are a downside risk.

Bahrain is one of the top GCC and Middle East and North Africa regional outperformers in terms of its operating environment. The kingdom's key strengths lie in its logistical profile and trade and investment environment. With Bahrain's modern and well-connected utilities and transport infrastructure, businesses and their supply chains will find few risks of any type of utilities shortages or outages or poor-quality transport systems causing them headwinds. Bahrain has a relatively streamlined regulatory framework while allowing 100% foreign ownership in most sectors. The absence of a national minimum wage, low labour contributions and flexible labour regulations offer firms a low-cost labour environment and improve the ability of companies to adjust their labour in response to market shocks. However, Bahrain has a small pool of local labour, both skilled and unskilled, thus necessitating the import of foreign workers in a broad range of industries. Overall, with good availability, the low cost of utilities, and a highly receptive trade and investment environment, Bahrain is one of the least expensive places in the world to set up certain business ventures. 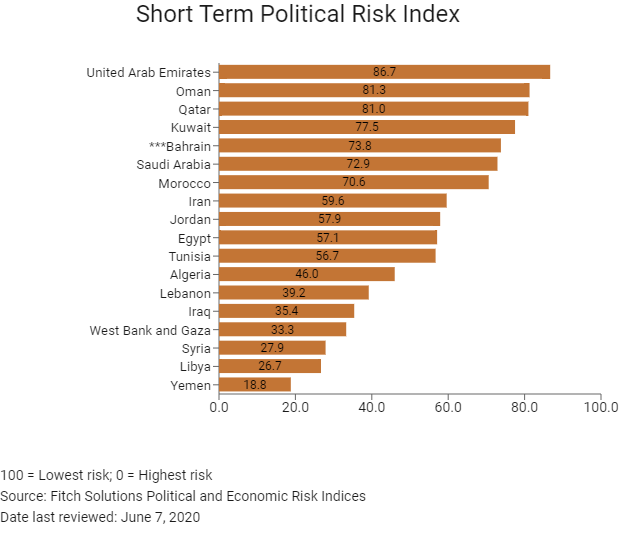 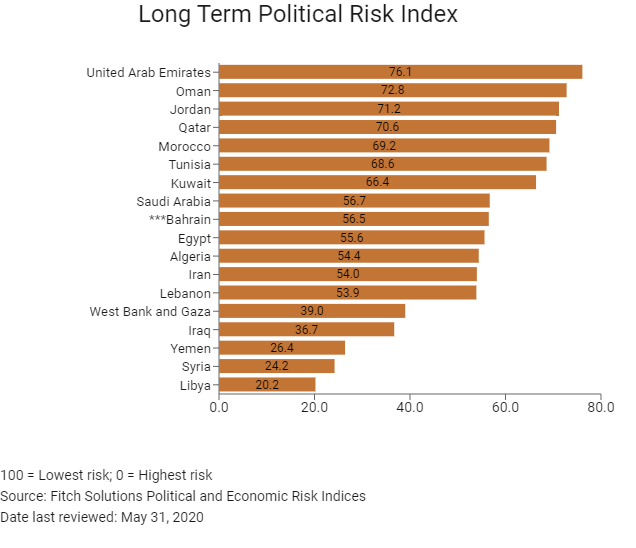 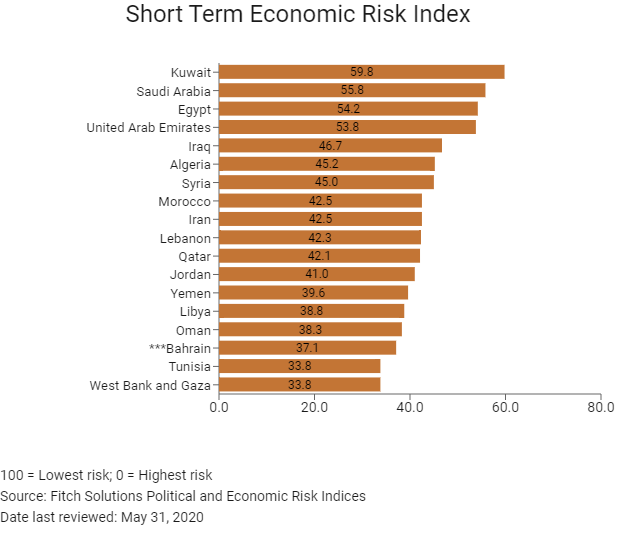 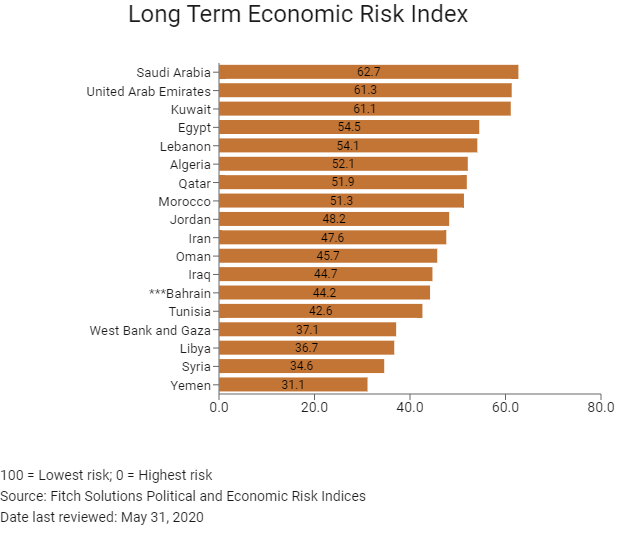 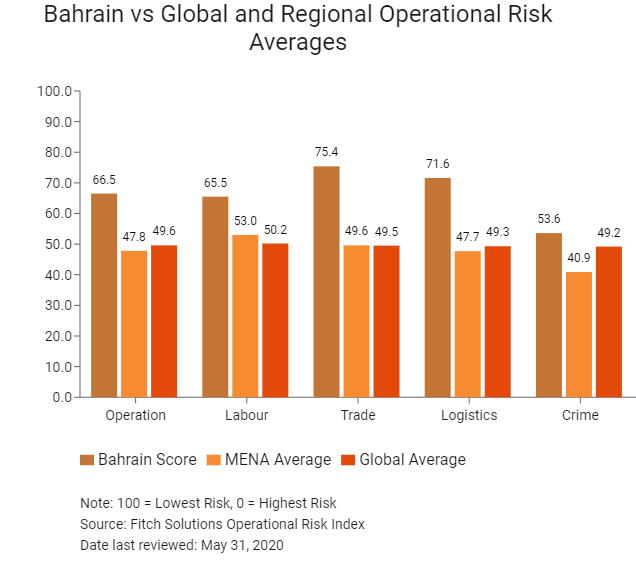 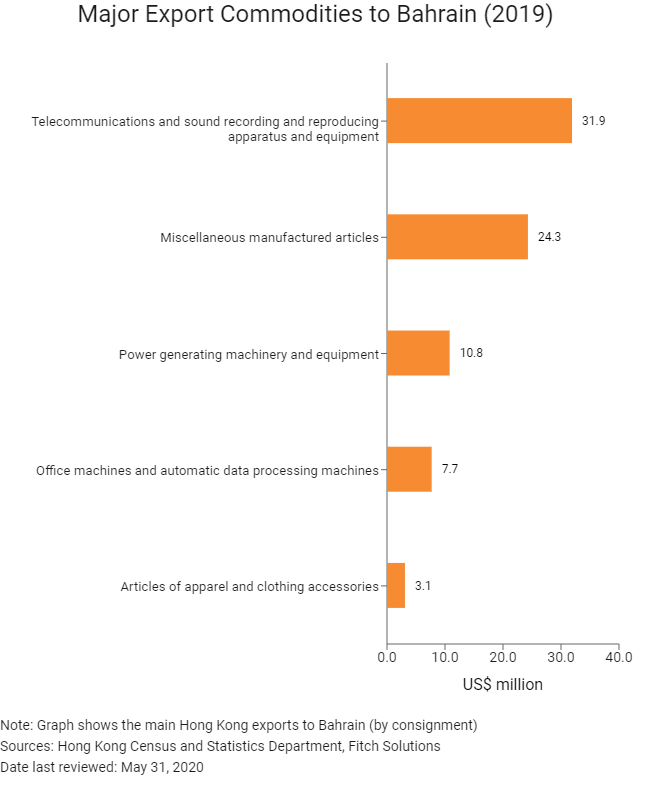 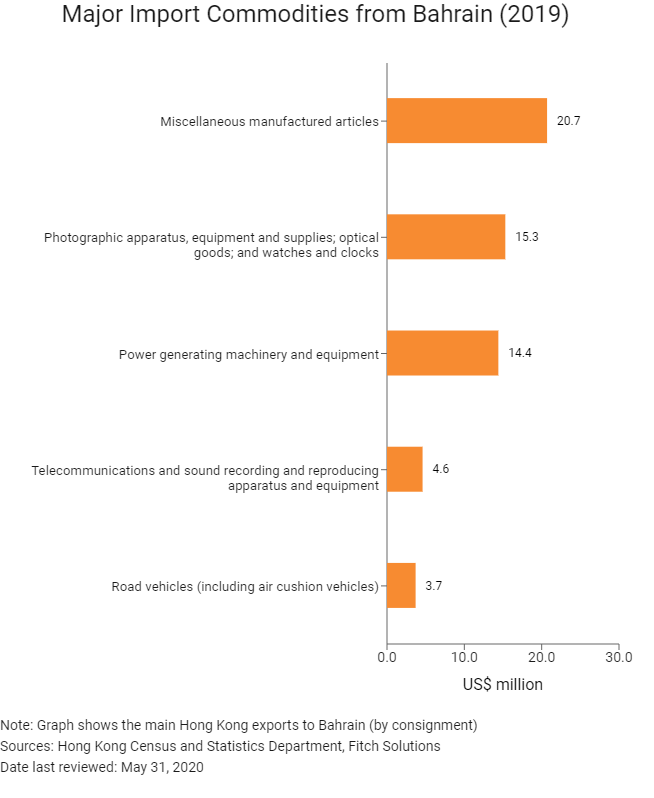 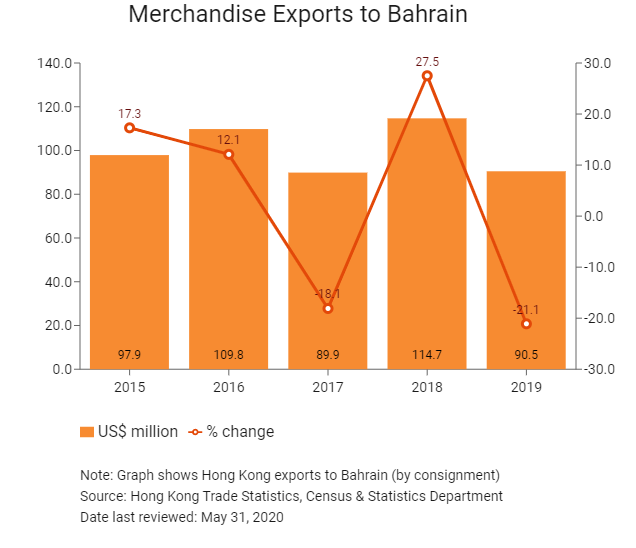 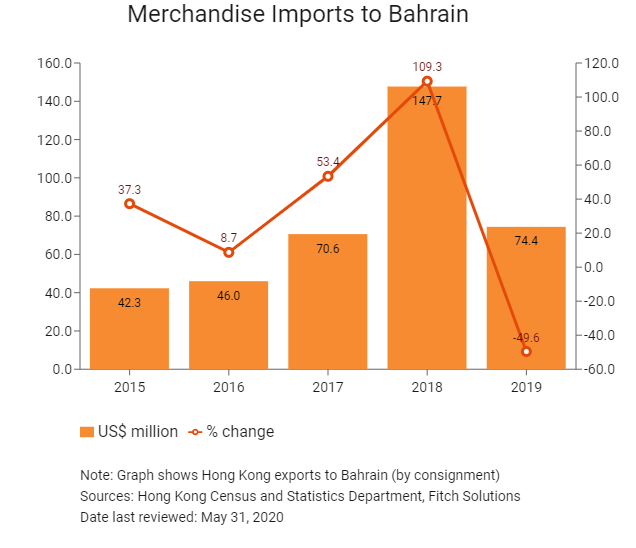 Treaties and Agreements between Hong Kong and Bahrain

A Bahrain tourist visa is required for HKSAR passport holders. Nine visa types are available, with a one-year, multiple-entry visa permitting stays of up to 90 days.